My friend Sara Bhatia lives in the hothouse, hot mess of Washington, D.C., and today she sends a dispatch from our nation’s capital… 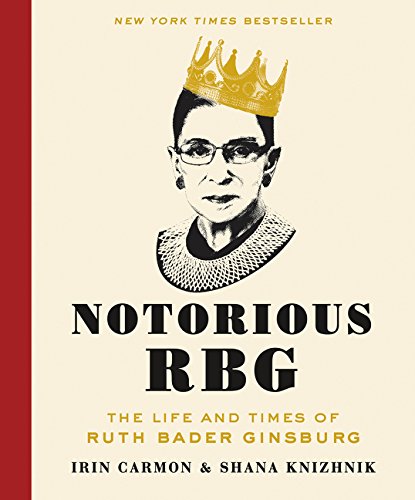 From Sara:  It was a lucky coincidence that I read Notorious RBG: The Life and Times of Ruth Bader Ginsburg the week preceding the sudden death of Supreme Court Justice Antonin Scalia.  Notorious RBG, a legal biography with an appealing pop culture veneer, is a tribute to the 82-year old liberal justice and champion of gender equality.  At the same time, it shines a light on the important work of the Court and the critical issues at stake in the appointment of a new justice.  Regardless of where you fall on the political spectrum, this biography is a worthwhile, even delightful, read and provides much context for the contentious approval process facing President Obama’s freshly minted nominee for Scalia’s seat, Judge Merrick Garland. 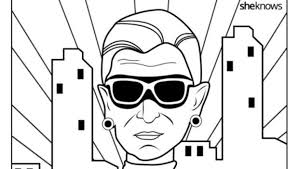 The work of two millennials, Irin Carmon and Shana Knizhnik, Notorious RBG is a 21st century genre-bending biography.  It is rich in personal and intellectual history, careful to position Ruth Bader Ginsburg within the context of the women’s movement and her contributions to the law.  But Notorious RBG reaches beyond conventional biography to tease out Ginsburg’s appeal as a popular culture icon.  This is a book to read in hard copy – with dozens of photos, timelines, political cartoons, and heavily annotated legal briefs, it’s a funky mash-up of a scrapbook and serious intellectual biography. 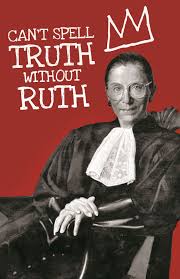 The title is a playful riff on the ‘90s hip hop artist The Notorious B.I.G.  The implied contrast between the 300-lb black artist and the frail, octogenarian justice makes the moniker funny, but there’s an undercurrent of respect too, implying toughness and sass, and a willingness to speak truth to power.  The quirky tag “Notorious RBG” first surfaced in 2013 in tribute to Ginsburg’s eviscerating dissent in a civil rights case.  As the Court has moved to the right over the past decade, Ginsburg’s clarion voice calling for equal opportunity has grown louder, and in doing so, she has given rise to her improbable pop culture image as a defender of liberal causes.  As another popular meme asserts, “You can’t spell Truth without Ruth.”

For her young biographers – and even women of my generation – the obstacles faced by the young Ginsburg are almost unimaginable.  At Harvard Law in the 1950s, where Ginsburg was one of 9 women in her class, she was challenged point blank by the dean to justify taking a spot otherwise reserved for a man.  Remarkably, women weren’t permitted to enter the law school reading room.  Despite graduating first in her class, she found it virtually impossible to get a job interview.  She was recommended to Justice Felix Frankfurter for a Supreme Court clerkship, but denied, both because she had a young child at home, and – almost unbelievably – because Frankfurter did not wish to curb his cursing around a woman, and purportedly disliked women who wore pants. 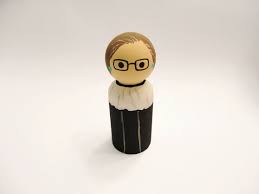 Faced with societal and legal obstacles to professional success, Ginsburg quietly pulled herself up by her bootstraps, and armed with her tremendous intellect and a remarkably supportive husband (Martin Ginsburg, himself a legal lion), went out into the world to build a career.  Never one to break down barriers or stage a protest, Ginsburg quietly proved her worth through her work.  For her generation, her decision simply to go to law school and build a professional career while raising a family defied stereotypes.  As her biographers put it, “RBG was already a radical just by being herself – a woman who beat the odds to make her mark.” 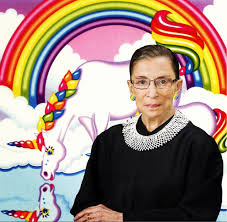 And then there’s the work.  Less flashy and vocal than contemporaries like Gloria Steinem, RBG was no less influential, creating a legacy as the architect for the legal strategy of the women’s movement.  In an era in which pregnancy was a fireable offense, RBG whittled away at discriminatory laws.  At the ACLU in the 1960s and ‘70s, she cherry-picked cases designed to crack open the door for equal rights, favoring incremental, deliberate change over wide sweeping reform.  The list of cases she argued before the Supreme Court reads like a feminist playbook: Reed v. Reed, Frontiero v. Richardson, Struck v. Secretary of Defense.  She tackled workplace issues, reproductive rights, forced sterilization, access to civic participation, and benefits law.  Cleverly, RBG approached the question of equality from both the women’s and men’s perspectives – arguing, for instance, that laws permitting women to purchase alcohol at a younger age than men constituted sexual discrimination.  Notorious RBG does a terrific job describing Ginsburg’s landmark cases and laying out the legal logic for affecting change.  The biography is written for a lay audience, but the description of RBG’s seminal cases will pique the interest of lawyers as well. 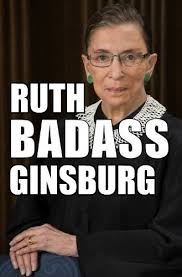 The biography is equally effective in painting a picture of the justice described by a former colleague as “almost pure work.  The anecdote that describes her best is that there are no anecdotes.”  Fortunately for readers, this is not exactly so.  The bio is peppered with fun details like Ginsburg’s workout routine (she can do 25 push ups!) and her love of fashion.  But overall, her profile is one of a workaholic deeply committed to justice and her career.  Her 55-year marriage is painted as a glorious love affair; interestingly, the biographers have less to say about Ginsburg as a mother.  RBG’s relationships with her fellow justices provide additional perspective, including her friendship with retired Justice Sandra Day O’Connor and her mentorship of the two younger women justices.  Ginsburg’s decades-long friendship with Antonin Scalia, her ideological opposite, was much noted in the press in the justice’s recent obituaries. The opera “Scalia/Ginsburg” – yes, opera! – celebrates this surprising friendship.  The biography gives flesh to their relationship, describing their mutual love of opera and theater, shopping expeditions, international travel, and years of ringing in the new year together.  Despite my own misgivings about Scalia as a justice, upon hearing of his death, I felt true empathy for RBG’s loss of her friend. 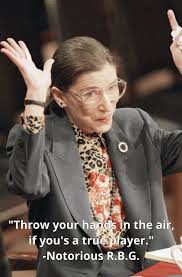 Overall, Notorious RBG is a terrific read, combining the personal biography of a seemingly quiet, understated woman who broke through formidable barriers of gender discrimination with a substantive, intellectual history of landmark legal decisions of the past half-century.  All this wrapped up in a delightfully effervescent pop culture package. 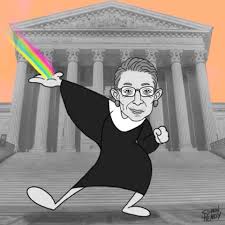 I met Sara when we both lived in D.C. – each with a baby, each of us learning how to be a parent.  I had Ruth, she had Zander, and we figured a lot of things out!  Those were days of wonder and joy and frustration and exhaustion, but mostly wonder, at least in hindsight.  The most true thing I can say about that time is that we were all on a steep learning curve – Sara and I, Ruth and Zander – and I will always be grateful for their company on that path.

Sara had a steadiness then – and a steadiness now – that is a tremendous gift to all around her.  She’s raised her two boys in D.C. while I’ve raised my two girls mostly in Nashville, and she seems to be surviving the teenage years pretty well:  “I love having teenagers!” she admits.  “They are funny and interesting and engaged in the world.  We’ve been having terrific conversations lately about current events, and they are fascinated by the current election cycle.  My boys take after my husband – they are huge sports fans, good athletes, great travelers, and adventurous spirits.  Left to my own devices, I would spend all my free time reading, writing, and going to museums and the theater.  My boys’ interests and activities have pushed me well outside my comfort zone, for the better. But I still find zip lining scary.  And I will never, ever go bungee jumping.”  (I hope not, Sara! I’d have to add “crazy” to your profile.)

Sara plays a mean game of Scrabble and Monopoly and about twice a year will do a really tough jigsaw puzzle.  She enjoys the New York Times crossword puzzle in bed every night and also relaxes by watching “International House Hunters.”  “Sometimes my kids come and watch with me and help me do the crossword, sometimes my husband joins me and does email, and sometimes it’s just me and the dog,” she notes. 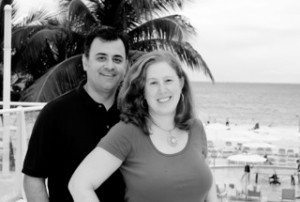 Sara and her husband Karan make a stunning couple – Princeton grads, each, who met in high school in Washington D.C..  Karan’s father is of Indian descent and his mother is English; Sara’s family is Jewish.  “When we started dating, people found us a surprising match because of our different backgrounds and political views, but we’ve really grown up together and become intertwined.  We are truly life partners.  As Phoebe once said on “Friends,” ‘he is my lobster.’”

I asked Sara a few questions about books and reading which will help you fill in the picture.

I loved mysteries and historical fiction, and still do – for the past several years, I’ve been trying to write my own.  It’s a historical mystery for middle school age readers, set in the Lower East Side of Manhattan in 1910.  The story begins with a 13 year old ruffian finding a diamond embedded in the tobacco leaves of a stolen cigar, and ends with a chase scene inside the Statue of Liberty.

I own an almost complete set of Nancy Drew books through #51 (The Mystery of the Glowing Eye), including the rare and useless Nancy Drew Cookbook.  I also loved the Great Brain books, and Encyclopedia Brown.  My favorite historical novels were the All of A Kind Family series, the Little House series, and the Anne of Green Gables books.

Of course! I read Looking for Mr. Goodbar and Fear of Flying in junior high and even I realized they were wildly inappropriate for a 12 year old.

Who are your favorite authors now?

I love a big, fat chunky epic novel with lots of characters and plot turns. Gore Vidal’s Lincoln made me think I wanted to be a historian.  Six years of grad school made me change my mind.  I will read anything written by Michael Chabon, Jonathan Franzen, Tom Wolfe, Meg Wolitzer, and Allegra Goodman.  The best books I’ve read recently are The Interestings, The Goldfinch, and Love and Treasure.

Latest book that aggravated you?

City on Fire.  It’s exactly the kind of book I usually gobble up, but I just couldn’t make myself fall in love. 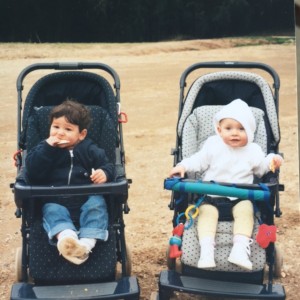 Zander and Ruth, 16 years ago

We know the latest book you loved, Sara.  My sincerest thanks for your great post on Notorious RBG today!