“Whiskey Tango Foxtrot,” playing in theaters now, is a middling mess.  I wanted to love it:  another triumph for the fabulous Tina Fey! 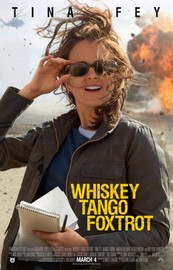 But the movie aimed somewhere between serious and comic and just felt odd.  It was never funny enough to make you laugh out loud and never weighty enough to convey the terrifying reality of Afghanistan in 2005.  I suppose it worked pretty well as a romantic comedy – or “dramedy,” as I’ve seen it described a few places – mildly entertaining at best.  Not quite as good as the buttered popcorn. 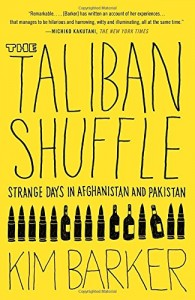 The Taliban Shuffle, Kim Barker’s memoir on which the movie is based, is both funnier and more sharply aware of circumstance.  The Chicago Tribune sent Barker to Afghanistan shortly after 9/11, woefully unprepared in every way.  “I was hardly qualified to go anywhere, even Canada,” she writes.  At first, she considers Afghanistan a version of Montana, where she grew up:  “Afghanistan seemed familiar.  It had jagged blue-and-purple mountains, big skies, and bearded men in pickup trucks stocked with guns and hate for the government.  It was like Montana – just on different drugs.”  She learns how very wrong she is and meanwhile becomes addicted to the adrenaline of war zone reporting, making all kinds of questionable choices both personally and as a reporter.  She “breaks the journo code” (P.J. O’Rourke) by describing the hard core fun of war zone life after hours, where the social scene resembles “a cross between a fraternity party and the Hotel California, where the same characters always seemed to stay too long and drink too much…”  I learned a tremendous amount about the region and the war while she bore witness to her adventures, friendships, near-disasters, hard partying, and eventual decision to leave Kabul for good.  “With the passage of time…the adrenaline monkey on my back shrank to more of a sea monkey,” she writes, but you feel the pull of the region on her still.

“Whiskey Tango Foxtrot” simplifies and diminishes.  It dumbs everything down.  It disappoints.

Not many miniseries have been too interested in feminine rage.  I’m a fan of the subject, having recently weathered such feelings in my forties.  Olive Kitteridge, Elizabeth Strout’s Pulitzer-Prize-winning novel, has translated well to the screen thanks to HBO’s writer Jane Anderson and director Lisa Cholodenko.  If you like brash, harsh, complicated heroines in multiple mediums, Olive is the gal for you.  You’ll be glad you took the time to read the novel or watch the four-episode, Emmy Award-winning series.

If you haven’t read the book, it’s 13 short stories forming a novel that reveals Olive’s unhappy, volatile but fascinating life in small-town Maine. art of what makes this book so compelling are the rich, real family members, neighbors, and townspeople Strout wrote around Olive.  Olive has an impact on every one of them, as does her husband, Henry. 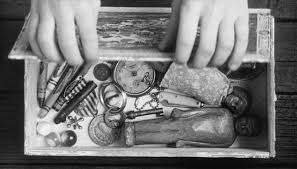 Adaptations are tricky.  Not all of them turn out as well as To Kill a Mockingbird.  If you recall the opening credits, a child hums tunelessly, unseen except for hands playing with items in a keepsake box, which turns out to be treasures Boo Radley hid for Scout and Jem in the knothole.  The medium of film does instantly without words what Harper Lee’s book took some warming up to do: land the story squarely in a child’s world, through a child’s eyes.  From there the filmmakers knew to choose the most essential moments of a dense novel that could bring Maycomb, Alabama and its denizens to life.  Likewise the HBO series opens with important objects and locations in the story, each with a slightly eerie and whimsical twist: ice swirls in a glass of whisky, and then the glass disappears and nothing but a brown and ominous ring smiles from a wrinkled napkin; pharmacy pills are counted out, then whimsically placed in the shape of a daisy; a loam-rich trench yawns open, fresh dug in the garden, looking more coffin than flower ready.

Film does what it does best with sweeping panoramas of the Maine coast and the Kitteridge property.  We get sun-kissed and bloom-filled Maine; windswept and bone-chilling Maine; frosty and blow-you-off-the cliffs Maine, every vista and its colors absolutely brilliant.  Still, we need Strout’s original words to tell the camera what to capture:

…mornings used to be his favorite, as though the world were his secret, tires rumbling softly beneath him and the light emerging through the early fog, the brief sight of the bay off to his right, then the pines, tall and slender, and almost always he rode with the window partly open because he loved the smell of the pines and the heavy salt air and in the winter he loved the smell of the cold.

You can see how the panning camera could easily be inspired by this precise prose and rolling rhythm.  The director’s eye follows Henry, too, in his daily ministrations to the public as a pharmacist, giving him as much a voice and role in the community as his complicated wife, Olive. 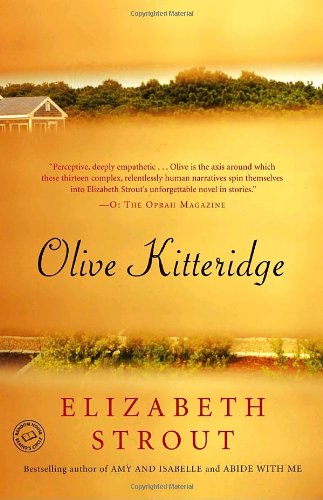 Strout trusted screenwriter Anderson to make some alterations, such as how Olive’s story begins.  Let’s just say the first episode leads with an almost-bang.  The story unfolds from that chilling moment to keep us in suspense through subsequent episodes wondering just how Olive gets 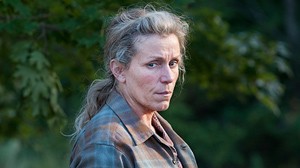 there.  It’s one key change that might anger book devotees.  I didn’t react strongly, I suppose because there were years between my reading and my viewing.  Anderson admitted in HBO’s explanatory notes she needed something edgier, something “sexy.”  The good news is that the rest of the series doesn’t overdo the violence or shock for the sake of keeping viewers rapt.  The film is full of quiet moments and slow shots, including close-ups of Olive’s face, spotted with age and lined with care. 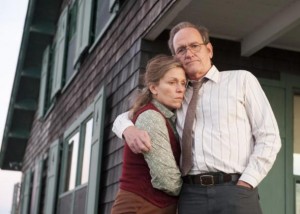 Frances McDormand is tremendous as Olive.  Richard Jenkins is brilliant as Henry.  You don’t have to read the novel to be touched by their rendering of a marriage, precariously balanced on a ledge between vast differences, and never quite falling off.  Jenkins is the perfect choice for the long-suffering husband, full of infinite patience, Pollyanna optimism, and expansive love.  McDormand fully inhabits the portrait Strout drew of a tumultuous woman, rife with stormy emotion, bold selfishness, and fierce loyalty.  Together they paint a partnership that fights the good fight of a marriage neither would ever end.  While both characters are drawn to other people over the years, neither fully succumbs to the temptation.  Enough times do they realize the deep need they have for one another.

Back to Olive and her rageful, selfish being.  Again, the inspiration for this beautiful work is the book itself and the pithy, resonant images Strout gave us in the first place.  Here in this tiny moment of the passage below, we get so much: Olive’s stingy hostessing of a dinner for Henry’s employee, making a statement of resistance via dessert; Henry’s tireless scurrying to temper his wife’s harshness; and Olive’s sardonic response to small talk.

For dessert they were each handed a blue bowl with a scoop of vanilla ice cream sliding in its center. “Vanilla’s my favorite,” Denise said.

“Mine, too,” Henry Kitteridge said.

The cold scoop of white cream is exactly the sort of emotional dollop landing on anyone’s face whenever Olive stalks by.

Why so angry, Olive?  I’ll let the book or miniseries tell you.  Maybe it’s the harsh winters; maybe it’s the genes; could it be the marriage?  Read or watch to find some of yourself or family in the mirror of good art. 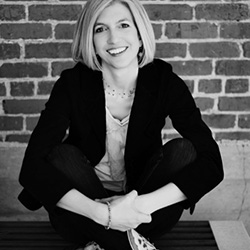 Lyn Fairchild Hawks, my illustrious high school classmate and dear friend, writes YA contemporary fiction and short stories.  She is the author of the novel, How Wendy Redbird Dancing Survived the Dark Ages of Nought; co-author of the graphic novella, Minerda; and author of the short story collection, The Flat and Weightless Tang-Filled Future.  A lifelong educator, Lyn also designs differentiated lessons making Shakespeare accessible to students.  She is sometimes bullied by Sonny the cat. 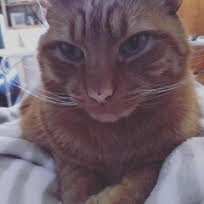