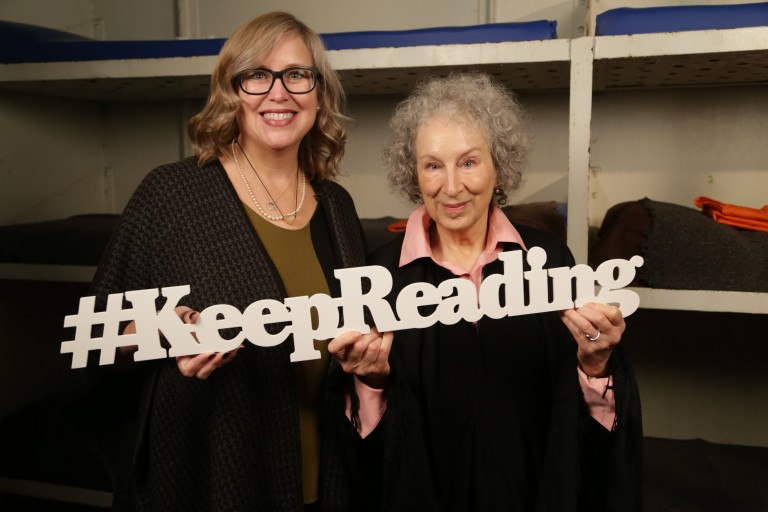 If you’ve got three minutes – literally, three – and need a tiny refreshing break from the Mayhem, check out a newly released interview with Margaret Atwood, part of Nashville Public Television’s revitalized Word on Words series.  Margaret Atwood did some time with author J.T. Ellison at the Jerry Newsom Center, talking about herself and her latest book, The Heart Goes Last.  “I don’t think I’m fearless, I’m merely ignorant,” Atwood says teasingly at one point. “It comes from growing up in the woods.  I don’t think I was properly socialized in relation to what other people would find unacceptable.”

The Heart Goes Last is the story of Stan and Charmaine, who in desperate economic circumstances take a chance on an alternative living project in which the couple will spend alternate months as prison guards – and as prisoners.  “When I figured out what “the heart goes last” meant, I gasped,” enthuses J.T. Ellison, in awe of the master.  Atwood holds up her finger, cautioning her to say no more.  “I won’t, I won’t!” Ellison quickly reassures her. 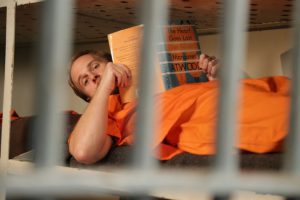 From The New York Times: “The battle between monogamy and the reality of human desire, the intertwining of sex and dominance, of love and free will:  These have been recurring themes over the span of Margaret Atwood’s prolific career… What keeps The Heart Goes Last fresh, as with the rest of Atwood’s recent work, is that while it revisits earlier themes of her oeuvre, it never replicates.  Rather, it reads like an exploration continued, with new surprises, both narratively and thematically, to be discovered.” 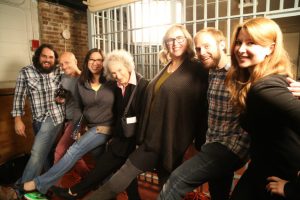 While at the website, I decide to tune into Mary Laura Philpott’s interview with William Finnegan, also clocking in at a blessedly brief, smart, cordial 3 minutes.  His Barbarian Days: A Surfing Life just won a Pulitzer for biography/autobiography, and last week I heard Ann Patchett personally endorse it.  The Pulitzer AND Ann Patchett?  Strong. 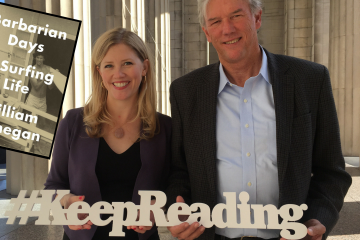 “Barbarian Days is William Finnegan’s memoir of an obsession, a complex enchantment.  Surfing only looks like a sport….

Finnegan shares stories of life in a whites only gang in a tough school in Honolulu even while his closest friend was a Hawaiian surfer.  He shows us a world turned upside down for kids and adults alike by the social upheavals of the 1960s.  He details the intricacies of famous waves and his own apprenticeships to them….As Finnegan’s travels take him ever farther afield, he becomes an improbable anthropologist…

Barbarian Days is an old-school adventure story, an intellectual autobiography, a social history, a literary road trip, and an extraordinary exploration of the gradual mastering of an exacting little-understood art.”

As he wrote the book, which involved reflecting on his adolescent years, Finnegan had the chance to look at some letters he had written as a 13 year old.  “What was that like, reading your 13 year old self?” Mary Laura asks.  “I was so struck by the lack of talent,” he says, embarrassed, sheepish, meaning it.  (Don’t be too hard on yourself, Bill – you were 13!)  They laugh.  “Also I had to question my veracity.  There were a few adventures that were a little too adventurous.” 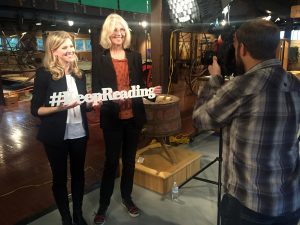 Well, at this point I’m totally procrastinating and decide to listen to Mary Laura’s interview of Jane Smiley as well.  It’s only 3 more minutes.  Jane Smiley recently concluded “The Last Hundred Years” trilogy, which includes the books Some Luck, Early Warning, and Golden Age.  The Guardian agrees with everyone else that the three books, despite their publication as a trilogy, are “a single novel of half a million words or so.”  Set at first on a family farm in Iowa, the story follows the Langdon family and its descendants for precisely 100 years, from 1920 to 2020, with each year receiving its own chapter.  Smiley’s advice to aspiring writers?  “If you haven’t grown up in a gossipy family, you must eavesdrop,” she says sagely. 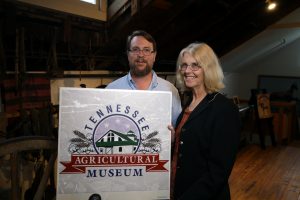 My advice to you this May, not that you asked – #KeepReading.