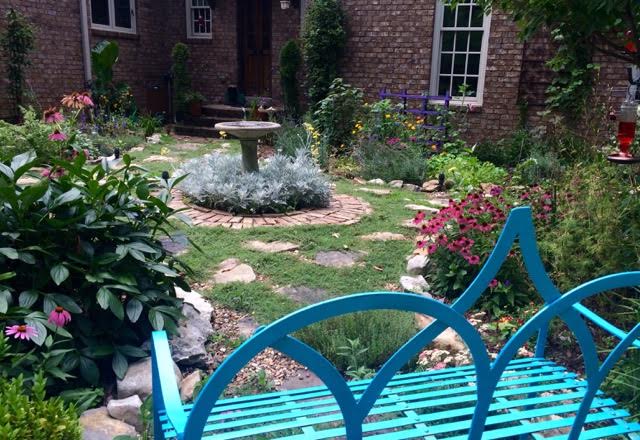 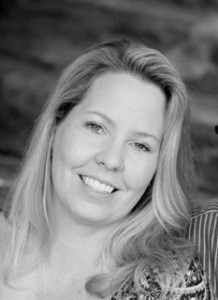 Where you can find Mary Jo Shankle is in her garden – here in Nashville or at their mountaintop retreat “Shankri-la” in Sewanee.  After the Sir Winston Churchill narcissi and irises and peonies come the hydrangeas.  Then the coneflowers and zinnias, bee balm and lavender.  Happiest of all:  the creeping thyme.  Rather, happiest of all:  Mary Jo.

Today, she shares her thoughts on Sheri Joseph’s Where You Can Find Me, set in an equally verdant locale.  For more on Mary Jo’s garden, see the end of today’s post.  (I took some poetic license above… she’s got a lot more going on in her garden that you’ll want to read about!)

While in Sewanee this past spring I reconnected with a college classmate, Sheri Joseph, who was on retreat at the Rivendell Writers Colony.  Sheri has taught fiction writing at Georgia State University for the past fourteen years and is the fiction editor at GSU’s literary journal, Five Points. Her works have been published in many literary journals and she has received a National Endowment for the Arts fellowship and the Grub Street National Book Prize, among other awards.  Eager to read some of Sheri’s work, I chose her third book Where You Can Find Me, and I am very glad I did. 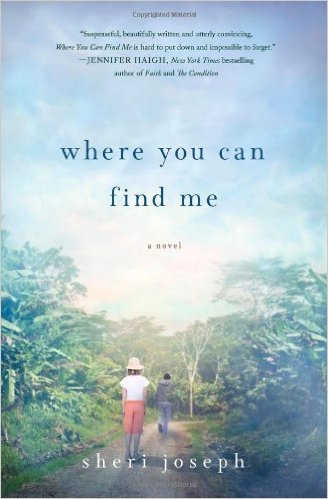 The book was published in 2013, and here is a plot summary from the dust jacket:

A week after his eleventh birthday, Caleb Vincent vanishes with hardly a trace. After a three-year search, he is found living a seemingly normal life under a new name with a man he calls his father. While outwardly stunned with joy at his safe recovery, Caleb’s parents and sister are privately scrambling to gather together the pieces of a shattered family. To escape the relentless media attention surrounding her son’s return, Caleb’s mother, Marlene, decides to flee the country and seek refuge in Costa Rica with Caleb and his younger sister, against her estranged husband’s wishes. There Marlene forms a makeshift household with her husband’s expat mother and his charming, aimless older brother, all residing in a broken-down hotel perched at the blustery apex of the continental divide. In the clouds of their new home, the mystery of Caleb’s time gone unfolds while new dangers threaten to pull him back toward his former life.

A self-confessed slow writer, Joseph generally creates 1000 pages for every 300 she keeps.  Where You Can Find Me was five years in creation, and because it is a work that did not come about with a backstory already formed in the author’s mind, Joseph spent a year and a half writing a backstory of 400 pages.  This unpublished material is the story of everything that happened from Caleb’s adduction to the FBI finding him.  The novel itself begins just after Caleb has been returned to his family.  We learn fairly quickly that Caleb was the victim of sex trafficking, but there’s a lot of uncertainty about the details.  There is what the boy knows but will not tell, what he has forgotten or suppressed, and what he has perhaps hallucinated.  There is the narrative imposed on him by “Jolly” (Charles Lundy, the man he is found living with) who could be either a hero or a villain depending upon whose story you believe.  There is Marlene’s unspoken, unconfirmed fear of what happened, and then of course, there is what the FBI knows.

It is tough subject matter, and this reader is glad to be spared any explicit, gut-wrenching details of the missing years.  Furthermore, such specifics would be unnecessary and even gratuitous because the book is about the aftermath.  It is about Caleb’s and his family’s journey back from “the Gone.”

As the story unfolds, Joseph deftly and eloquently explores many difficult, complex topics: the tension of family dynamics, the blurring of gender and relationship lines, the burdens of anger, guilt, and blame, the slow discovery of identity (sexual and otherwise), the recovery of trust by broken people, and the (mythological?) narrative a lost innocent creates in order to survive the unthinkable.  Caleb struggles with his idea of self.  Is he Caleb or “Nicky,” his name while Gone?  Is he somehow both or will one persona win out over the other?Geography is as much a character as any person in the book and is integral to the plot.

Set at the edge of the Continental Divide in the cloud forest of Monteverde between the Gulf of Nicoya and the menacing Arenal volcano, “their world was a cloud made not of fluffy cotton, but of water”…full of “whiteout days of clouds and wet”…a place that reminds Marlene of “clinical depression in the form of scenery.”  However there is also much beauty in the family’s curious new home.  The Finca Aguilar, is a “place of gardens and gothic landscapes” full of exotic flora and fauna… a place of guayabana bushes, mango trees, and limon dulce, a place of poison dart frogs, 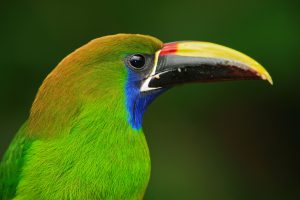 Where You Can Find Me is not intrinsically a mystery, but it is definitely suspenseful.  As the characters are deftly and thoroughly explored and developed, the reader is very aware there is something big at stake for many of them.  And while we don’t fully know Caleb’s past, we are desperately invested in his future and that of all those who love him.  I was captivated until the very end and think you will be too.

Sheri Joseph has just completed her fourth book, set on a college campus in the late ‘80s and centering around the mysterious death of a student.  Some of you who are well acquainted with a certain towered city set within a wood, far from the world upon a mountain crest, might find the novel’s unspecified locale markedly familiar.  I for one cannot wait to read it! 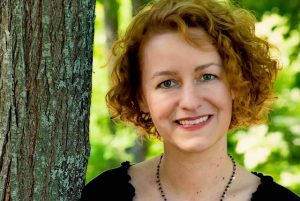 Where You Can Find Me is available to purchase here.

From Mary Jo, a short reflection on gardening: 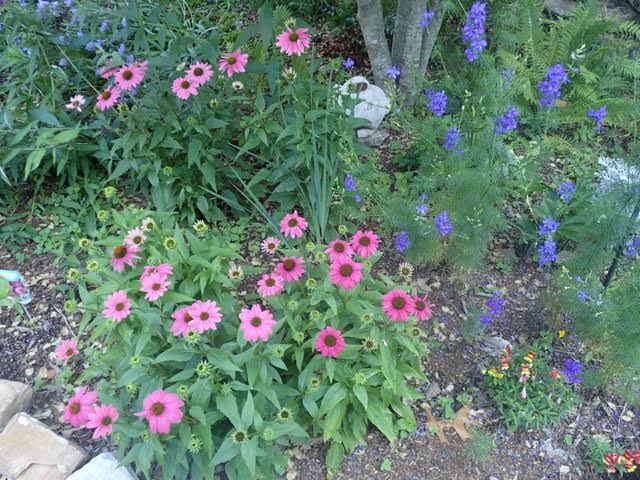 Rascal Flatts has a song which begins:

That’s how we feel when we pull into the drive at our Sewanee house we bought almost two years ago.  It is a place where we instantly exhale and relax.  That is not to say however, that is a place for idleness, rather it is a place where it is restorative and enjoyable to be productive.  I spend a good deal of my time outside tending (and I hope improving) the wonderful landscape surrounding the house. 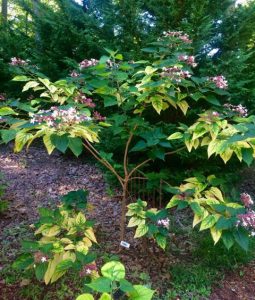 The previous owners put a great deal of planning and hard work into what was an empty lot and transformed it into a landscape of terraces, stepping stone paths, and areas of specimen plants.  Gardening enthusiasts, they labeled all the perennials, shrubs, and trees they had planted over the years.

We first saw the house in late fall and took possession the following January, so I really didn’t know exactly what to expect come spring.  I was not disappointed!  Plants I “inherited” include several gorgeous variety of blooming bulbs, a dozen or more wonderful, huge peonies, purple cone flowers, rudbeckia, coneflowers, dianthus, sweet william, iris, four magnificent lavenders, and a variety of hardy herbs. 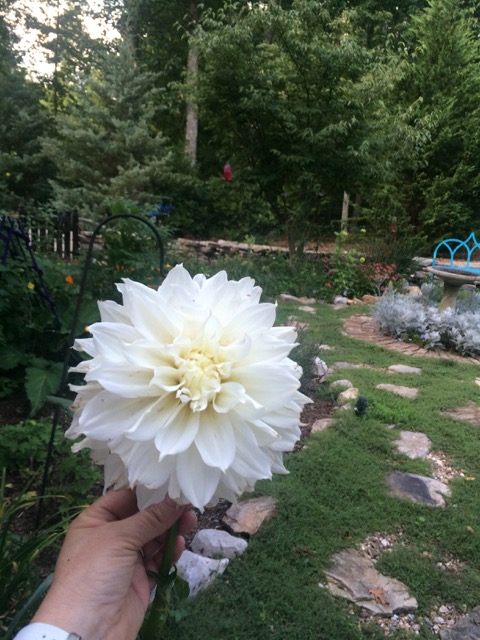 I have concentrated my attention mainly on the dry stacked walled garden in front of the house.  After a few consultations with June Mays, a new Sewanee gardening friend I met, I have redesigned and reworked the area over the past year and a half.  I first tackled the hardscape reshaping and replacing bricks with stone borders, and enlarging pathways with additional stepping stones and eight flats of creeping thyme.  The thyme has not creeped…it has leaped…but it is a pleasant chore to keep it in check.

This past spring I planted several dahlias which are thriving, as well as zinnias, primrose, nasturtiums, rock geraniums, and phlox.  To cultivate a cottage garden look, I have added larkspur, delphinium, dianthus, and hollyhock. 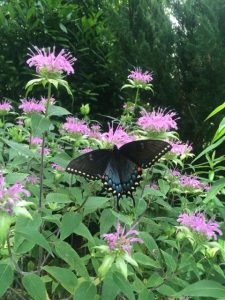 Three seasons of the year the garden is truly abuzz with bees and butterflies attracted by phlox, bee balm, stonecrop, purple coneflower, coreopsis, abelia, and asters.  The climbing vines…caroline jasmine, honeysuckle, clematis, hyacinth bean vine, and black-eyed susan vine are a favorite spot for hummingbirds.  The birdbath is appreciated by cardinals and robins and other birds I cannot identify.  It is such a pleasure to sit among the blooms and sounds with a morning coffee or evening cocktail.

I know how fortunate I am to have taken possession of a garden with such good bones and potential, and learning as I go, I look forward to many years of happy gardening. 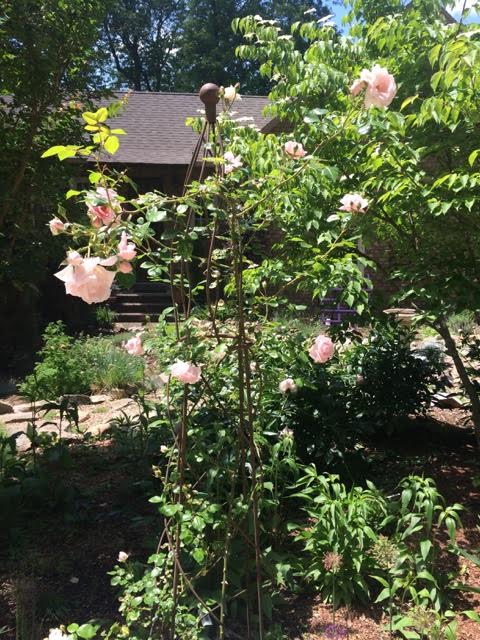