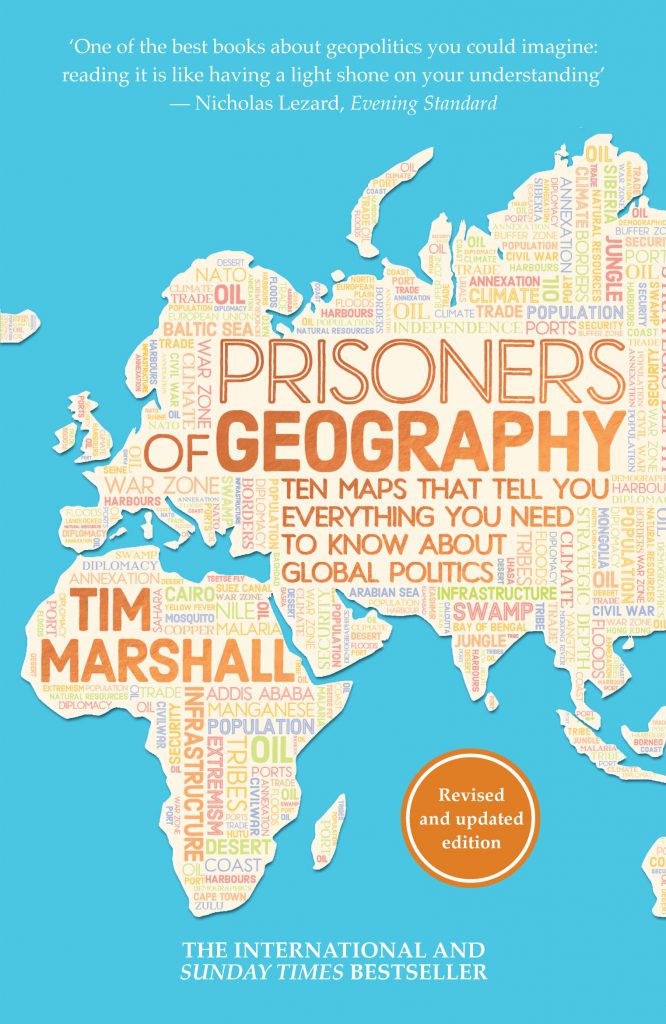 Prisoners of Geography: Ten Maps That Tell You Everything You Need to Know about Global Politics is a stunning little snack-sized book – delicious, nutritious! – that provides an incredibly engaging account of the world our next president will face.  It’s an international bestseller – #1 in London when I picked it up this summer – and I’ve never read a pleasanter book covering so much territory.

Author Tim Marshall lays out his overarching theme early on when he describes why Putin is obsessed with Ukraine:

Vladimir Putin says he is a religious man, a great supporter of the Russian Orthodox Church.  If so, he may well go to bed each night, say his prayers and ask God: ‘Why didn’t you put some mountains in Ukraine?’

If God had built mountains in Ukraine, then the great expanse of flatland that is the North European Plain would not be such encouraging territory from which to attack Russia repeatedly.  As it is, Putin has no choice: he must at least attempt to control the flatlands to the west.  So it is with all nations, big or small.  The landscape imprisons their leaders, giving them fewer choices and less room to manoeuvre than you might think.  This was true of the Athenian Empire, the Persians, the Babylonians and before; it was true of every leader seeking high ground from which to protect their tribe.

The land on which we live has always shaped us.

I’m sure Marshall’s statement that Putin has “no choice” is already raising your hackles.  As his argument develops, Tim Marshall is no apologist for Putin or any other leader.  He does help you understand Putin’s – and other leaders’ – worldviews.  In each of 10 chapters, he takes on a major region of the world and explains both the cultural history and the “facts on the ground” that profoundly affect leaders’ decisions.

Here’s the map of Russia, for instance: 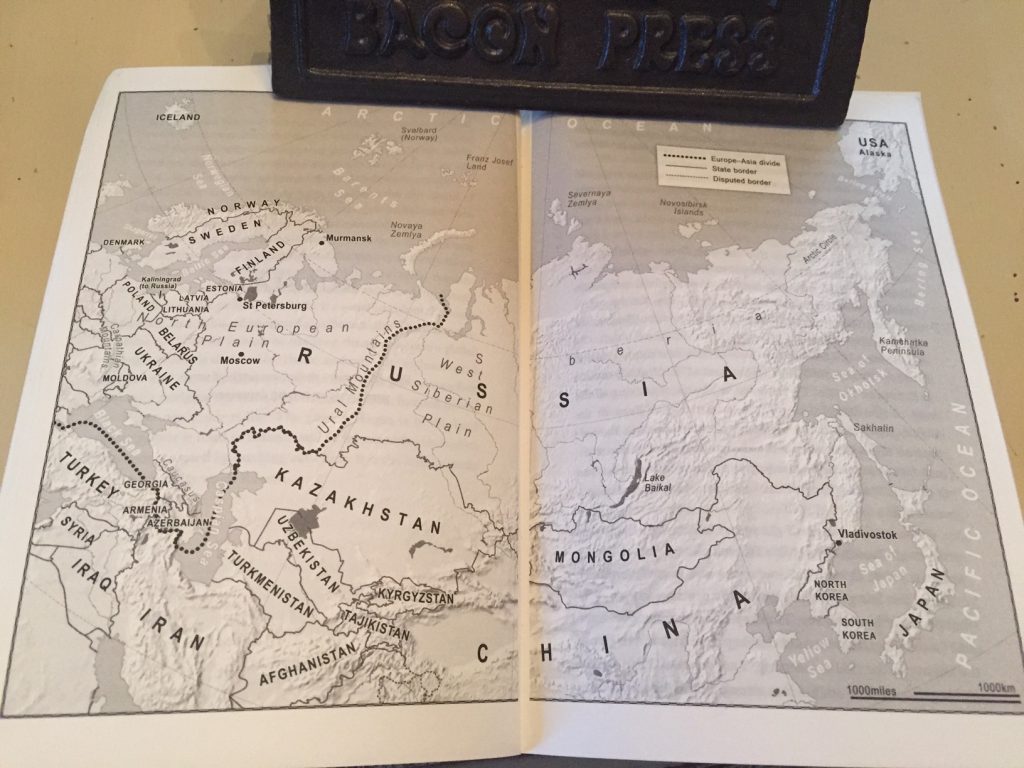 Marshall argues that this vast yet lightly populated country (compared to much of the rest of the world), rich in resources, now finds itself under more significant pressures from both the European and Asian borders than it has in a generation.  Countries on its eastern border seek an ever-tighter embrace with the West, and China is on the rise, looking outward (and pushing northward) as never before.  These specific pressures have led to a renewed cold war mentality in Marshall’s opinion, yet he insists that they be seen in the context of two essential geographical facts that Russia has faced for hundreds of years:

It doesn’t matter if the ideology of those in control is tsarist, Communist or crony capitalist – the ports still freeze, and the North European Plain is still flat.

Marshall’s chapter on China was of particular interest to me and might be to you.  He begins each chapter with an epigraph.  For China:

‘China is a civilisation pretending to be a nation.’ (Lucian Pye, political scientist)

Chinese civilization began to take shape in the Yellow River basin in the North China Plain (today, between Beijing and Shanghai) around 4000 years ago.  From this heartland developed a people – the Han – with a strong sense of identity:

By the time of the famous Chinese philosopher Confucius (551-479 BCE) there was a strong feeling of Chinese identity and of a divide between civilised China and the ‘barbarous’ regions which surrounded it.

The barbarians sometimes got the better of the Han.  In the 13th century, for instance, the mongol invader Kublai Khan ruled for 90 years; the British interfered with Chinese affairs in the 19th century; and the Japanese conquered large parts of China in the 1930s.  Mao Tse Tung, after defeating Chiang Kai-shek in 1949, consolidated power in the hands of the Han more effectively and broadly than any prior leader.

The Han people, from their base in the heartland, continue to expand:

China’s massive population, mostly crammed into the heartland, is looking for ways to expand.  Just as the Americans looked west, so do the Chinese, and just as the Iron Horse brought the European settlers to the lands of the Comanche and the Navajo, so the modern Iron Roosters bring the Han to the Tibetans.

And you can see why Tibet is so important to the Chinese.

Take a look at the map: 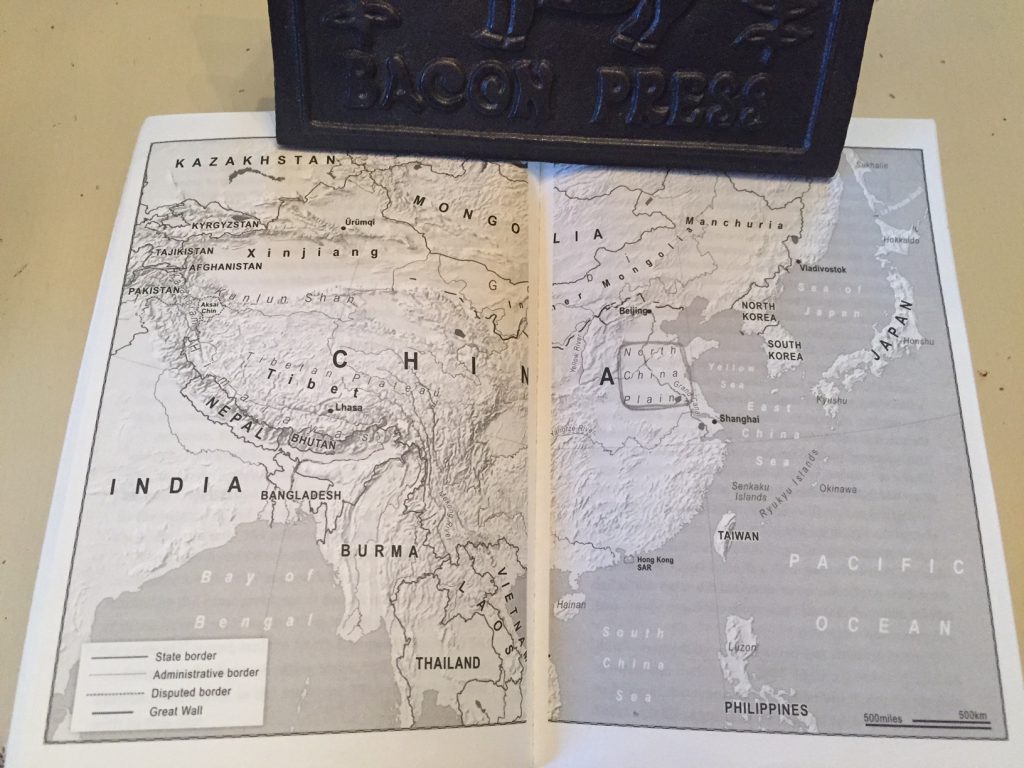 The Himalayas form a natural border between the two most populous countries on earth – India and China.  China only feels safe if it controls all the land on its side of the Himalayas (which includes Tibet):

This is the geopolitics of fear.  If China did not control Tibet, it would always be possible that India might attempt to do so.  This would give India the commanding heights of the Tibetan Plateau and a base from which to push into the Chinese heartland, as well as control of the Tibetan sources of three of China’s great rivers, the Yellow, Yangtze and Mekong… China… will clearly not allow that.

In a succinct 283 pages, Prisoners of Geography is no tome.  Neither is it a groundbreaking work of scholarship.  What this terrificIn  little book does is to remind you of some of the major geographical features of the planet – and suggest how they have affected countries past and present.  Imagine the most interesting person you know telling a story about – oh – geopolitics.   And making the world at least a little bit more comprehensible.

A final reason to read this spectacular little book?  Marshall’s epigraph for Chapter 3, on the United States:  “Reports of my death have been greatly exaggerated.” (Mark Twain)  This book is in some ways an encouragement during a discouraging political season.