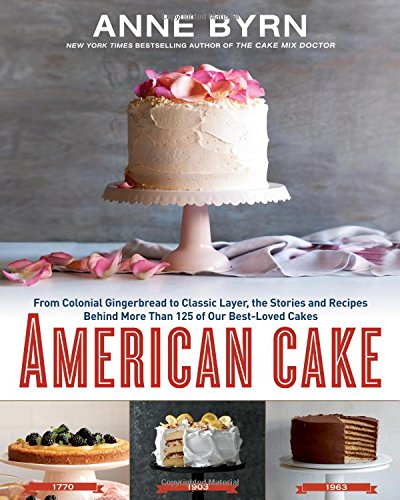 Anne Byrn and I were talking about Hummingbird cake, Red Velvet cake, and that famous Carrot cake from the Silver Palate cookbook as we noshed on a scone.  “Holidays preserve what the everyday loses,” she suggested.  More frighteningly:  “Cakes wouldn’t even be around except for the holidays.”  “Happy Holidays” has a whole new meaning for me!

Sharing a scone at Dozen Bakery in Nashville is a good way to begin an interview.  It’s even better to end under a spell of sweet enchantment.  The magician:  New York Times bestselling author and Nashville resident Anne Byrn.  The spell:  her gorgeous new cookbook, American Cake: From Colonial Gingerbread to Classic Layer, the Stories and Recipes Behind More than 125 of Our Best-Loved Cakes.

American Cake is equal parts American history, recipe collection, and photo extravaganza.  If these photos don’t inspire you to bake a cake, I seriously don’t know what will.  A few of the cakes in this book require a bit of time and skill in the kitchen, but most are very manageable for a person of average (below average?) kitchen skills like me. 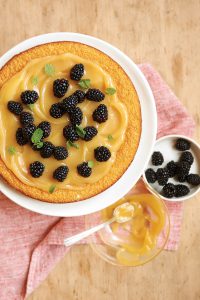 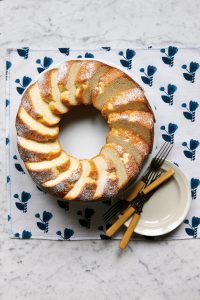 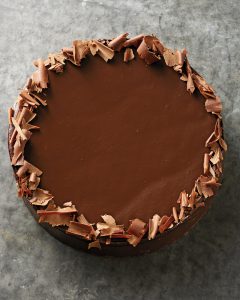 Anne traveled all over the country interviewing food historians and cooks and studying old cookbooks and newspapers while researching recipes for American Cake.  Newspapers (on microfilm) proved to be a surprisingly helpful source, as recipes used to be a staple in daily publications.

Anne began thinking about writing this book after a conversation with Alice Randall, another author Nashville is proud to call our own.  Alice and Anne were at Betsy and Ridley Wills’ home celebrating the release of Don Winston’s first novel, and Alice and Anne were talking food.  Anne at this point was already nationally known for her series of Cake Doctor books, which begin with boxed cake mixes and take them to the next level with inspired adjustments.  “You need to write the history of American cake,” Alice enthused.  “I could not get that idea out of my head,” Anne reflected.  She’s spent the last two years working on the project.

American Cake is organized chronologically, beginning with the period from 1650-1799.  The very first recipe is for “American Gingerbread,” a derivative of European versions that immigrants brought with them.  Here in the colonies, they substituted molasses for sugar.  “Gingerbread was a stomach settler in the 17th century,” Anne writes.  “In Benjamin Franklin’s autobiography, he writes of buying gingerbread before a long sea voyage.  Stephen Schmidt, New York food historian, says bakers would set up shop along the wharves and docks to sell gingerbread to sailors.  At the time, people assumed it was the treacle, or molasses, in the gingerbread that made them feel less queasy onboard, but it may have been the ginger.” 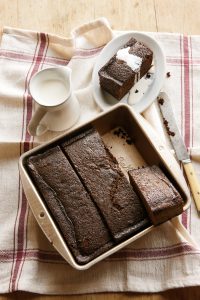 Another early recipe features 17th-century cheesecake, made at the time with fresh cheese curds similar to our cottage or ricotta cheese.  Anne shares a recipe from Plimouth Plantation in Plymouth, Massachusetts, updated for modern use by historians at the living history museum there. 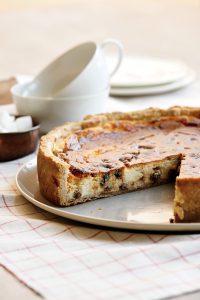 Fast forward to the 19th century.  You’ll find recipes for Mary Lincoln’s White Almond Cake, which became particularly famous after the President’s assassination, and Scripture Cake, popular in the 1880s and 90s.  You had to look up Bible verses referenced in the recipe to figure out the ingredients.  Other beautiful and interesting 19th century cakes include Louisiana Syrup Cake – a “simple, no-fuss spice cake into which cooks poured a cup of their local cane syrup,” and the Lady Baltimore Cake, the opposite of a no-fuss cake. “The regal Lady Baltimore Cake – filled with sherry-soaked figs, raisins, and walnuts, scented with just a suggestion of lemon, and crowned with a flufffy boiled-sugar icing makes an impression in real life as well as in fiction.”  (See Owen Wister’s 1903 romantic novel of the same name!) 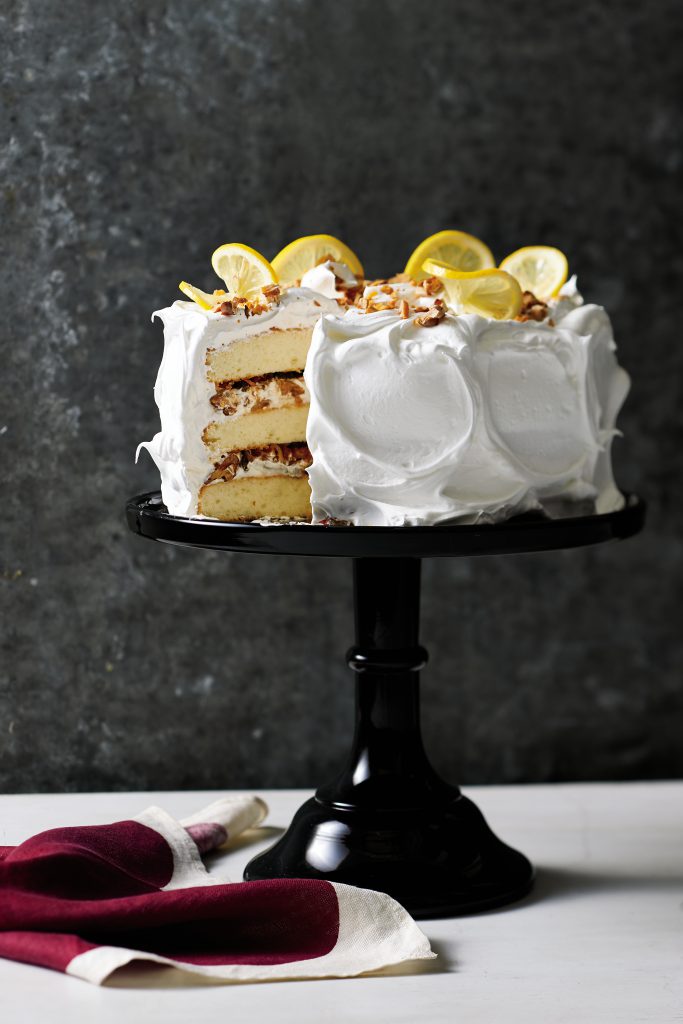 Much of American Cake focuses on the 20th century.  Anne is particularly fond of the hard-times cakes that emerged during World War I, the Depression, and World War II.  “This was the time of making do with what you grew or had on hand, and yet some of our country’s best cakes were born in these lean years,” she writes.  “The black walnut cake, pineapple upside-down cake, Cold Oven Pound Cake, and applesauce cake are such classic recipes we still bake today.”  At the same time, Anne also loves the glory days of the 1960s and 70s, when the French influence of Julia Child and the Mediterranean and Italian influences out of California revolutionized modern cake-making.  “It’s like the question everybody asks about rock-n-roll – will it ever be that good again?” Anne says, laughing.  She notes that today’s trends often focus on a rustic look and feel, feature vegetables such as rhubarb and beet, and incorporate olive oil.  One of her favorite modern recipes in the book is the Chez Panisse Almond Torte. 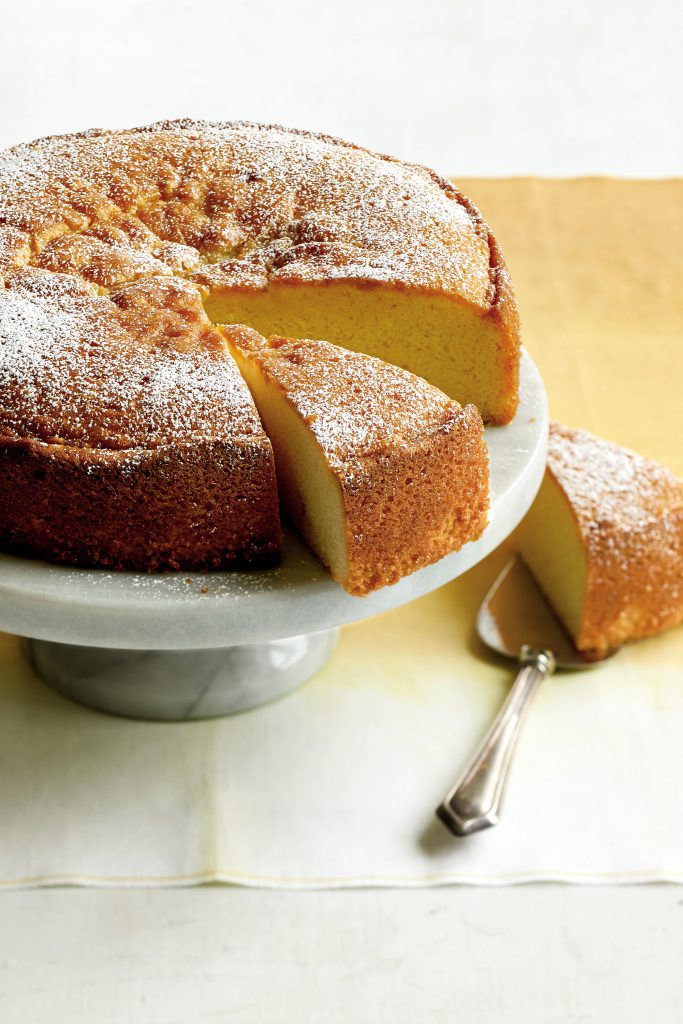 Anne covers not only our country’s history but also our amazing diversity in these pages.  You’ll find recipes for the Texas Sheath (or Sheet) Cake, Sister Sadie’s Honey Cake, the Huguenot Torte, the Italian Cream Cake, the Hawaiian Chantilly Cake, and the California Orange and Olive Oil Cake, among so many others.  The Chocoflan looks spectacular:  “For as long as Mexican flavors have been influencing the baking of California and Texas, there have been flan cakes in the oven…. But flan cake really made its presence known when Chicago’s Rick Bayless opened his restaurants, wrote his cookbooks, and went on public television explaining the foods of Mexico.  And it was in season 6 of Mexico – One Plate at a Time that Bayless shared the beauty and mystery of Chocoflan with us all.” 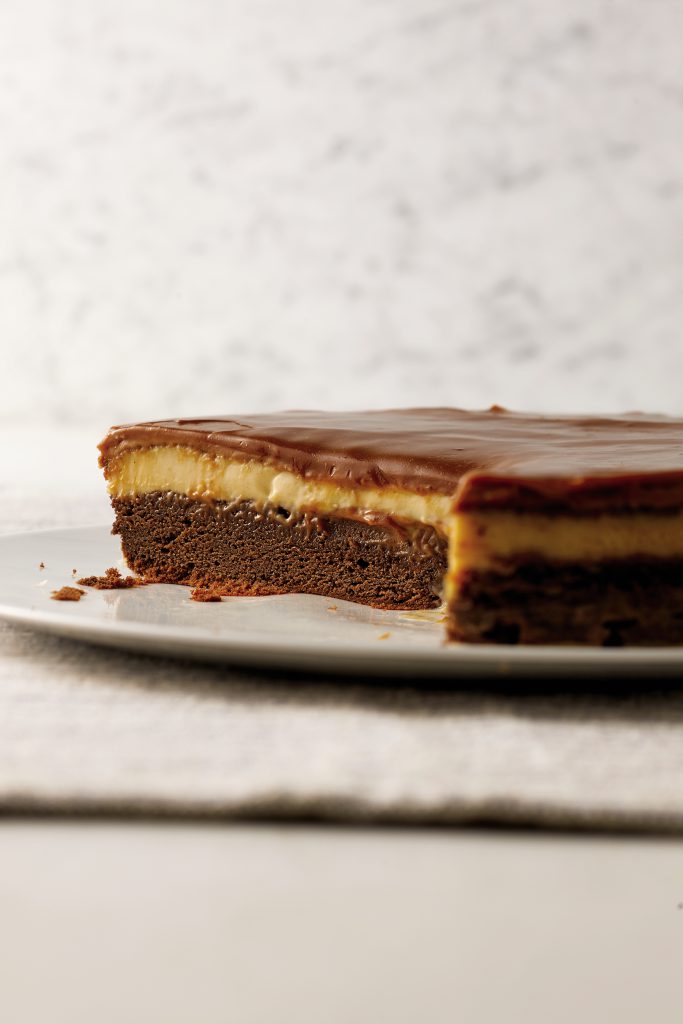 I can’t think of a lovelier gift than American Cake for the person in your life who enjoys baking – or a lovelier inspiration for yourself, heading into the holidays.

Anne Byrn will be teaching a class at Whole Foods in Nashville (Green Hills) in a few weeks.  Check it out:

Ever wonder what cake and wine the signers of our Declaration of Independence ate and drank?  Ever heard of a Depression Cake?  This fascinating hands-on class will take you away from our everyday cakes (Bundt cake, anyone?) and give you a historical perspective from colonial days up to our current fascination with great tasting cakes.  Join bestselling author, Anne Byrn as she discusses her new cookbook “American Cake” and our wine educator, Billie Joyce Helmkay as they walk you through this delicious class.  Students will prepare several cakes which they will enjoy with a wine specifically related to the cake of that time period.  This is going to be a fascinating, fun class.  Anne’s book will also be available for purchase or you may bring your own.

For more on Anne Byrn, see her website.  Anne grew up in Nashville, attending Harpeth Hall school as a girl.  She enjoys lunch outside at Epice, at Fido, and at Chauhan Ale House.  For dinner, she’ll go to Margot Cafe & Bar.  “I love what Margot has done for Nashville,” she says enthusiastically.  “She’s been a pioneer in fresh, local food.”  Or City House:  “Pastry chef Rebekah Turshin serves some of Nashville’s best desserts.”

A book she enjoyed recently?  Sisterhood of Spies: Women of the OSS, by Elizabeth McIntosh. 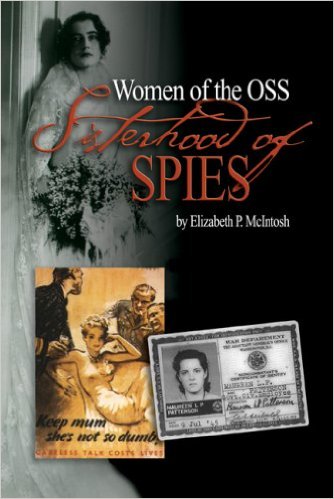 From Amazon:  Sisterhood of Spies is a real-life James Bond story, double-X chromosome-style.  Here, though, the heroines aren’t sex kittens in black spandex, but rather upper-crust women risking their lives in the service of a country at war.  Elizabeth P. McIntosh was a reporter in Hawaii when the Office of Strategic Services (the C.I.A.’s precursor) recruited her to aid in its campaign of wartime disinformation.  Fifty-five years later, she’s taken it upon herself to tell the story of the women who served with her undercover – some of whom have also achieved aboveground celebrity, such as Marlene Dietrich and Julia Child.  The narratives contained in Sisterhood of Spies couldn’t be any more gripping if they were written as fiction: Nazi interrogation ordeals, daring escapes across mountain passes, expeditions behind enemy lines, even Mata Hari-style affairs.  Ms. McIntosh’s book is a fond ode to these women and a bravery that has remained unsung too long.