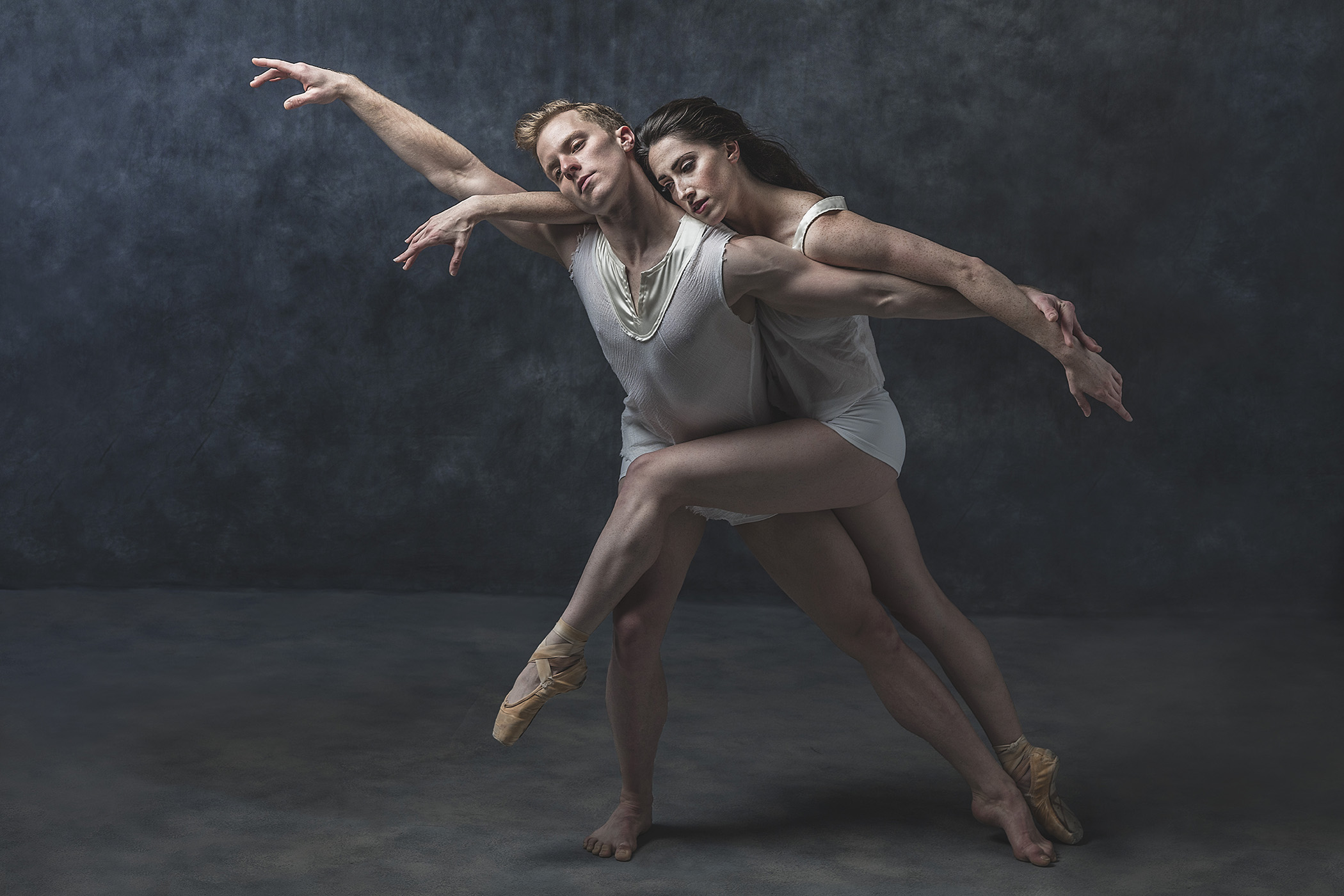 The monster doesn’t usually live under the bed – but he might live in your neighborhood. And one day, a lifetime later, you might tell everyone what you saw.

Edgar Feuchtwanger does just that in Hitler, My Neighbor. And Germany’s hit TV show “Babylon Berlin” – newly available in the U.S. – tries to explain how everyday people got caught up in the madness.

Other hard stories of the Holocaust have found their way into the light through music and dance (Light / The Holocaust and Humanity Project, performed by Nashville Ballet February 9-11; The Violins of Hope, conducted by Giancarlo Guerrero with the Nashville Symphony March 22-24).

Today’s post touches on Hitler, My Neighbor and “Babylon Berlin,” looking more closely at some remarkable offerings in Nashville over the next few months. 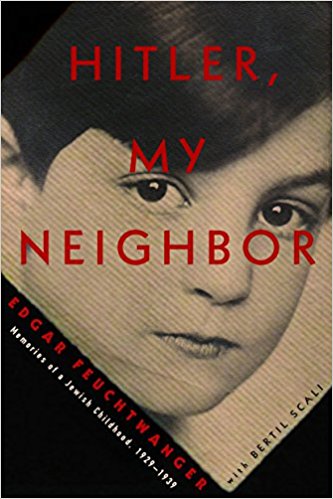 I first read about Hitler, My Neighbor in the “Briefly Noted” section of The New Yorker:

In this disquieting coming-of-age story, narrated in the voice of the author’s childhood self, Feuchtwanger unfolds the surreal tale of the decade he spent living across the street from Hitler’s Munich apartment, from 1929 to 1939. Born to proudly German secular Jews, he had barely grasped that he was Jewish before he heard that Jews were evil and not really German. He can’t wrap his mind around the contradictions, but neither can many adults. Illuminating how it was possible for so many to be so confused is the book’s great achievement…

In 1928, 2.6% of the German electorate voted for the Nazi party. Five years later – 44%. The German hit TV show “Babylon Berlin,” set initially in the year 1929, seeks to illuminate what happened. “From an historical perspective the series is very acute in showing how Weimar democracy was under attack both from the communist left, as well as by traditional conservatives, in a kind of unholy alliance,” says Thomas Weber, a German historian. Democracy can be – well – fragile. “Babylon Berlin” comes in right behind “Game of Thrones” as Germany’s second-most-watched show. 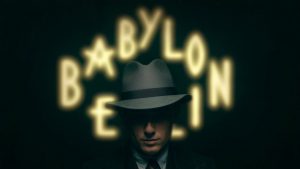 A series of conversations and artistic happenings in Nashville from January through March promise to meaningfully explore the Holocaust and its relevance to our times. 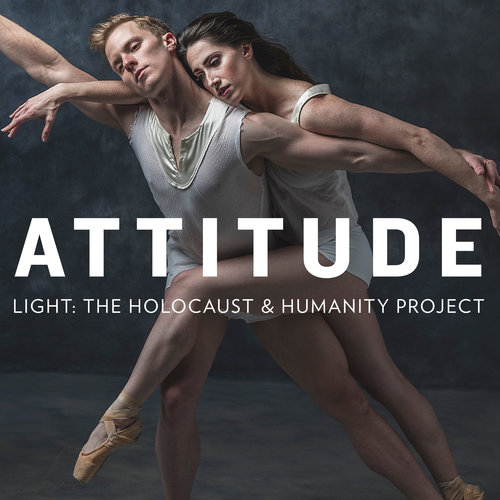 Pushing the boundaries of Nashville Ballet’s acclaimed Attitude series, Light / The Holocaust and Humanity Project offers a groundbreaking exploration of devastating loss, resilience and, ultimately, the triumph of the human spirit. Following Holocaust survivor Naomi Warren’s story, Light offers a unique opportunity to feel, better understand and reflect upon a piece of history that defies comprehension. The ballet illuminates the past to promote compassion, understanding and hope to issues relevant in today’s society. Music by Philip Glass, Arvo Pärt, Steve Reich, Evelyn Glennie, and Michael Gordon.

Naomi Warren, a Holocaust survivor living in Houston, Texas, serves as the inspiration for Light / The Holocaust & Humanity Project (from Ballet Austin website): 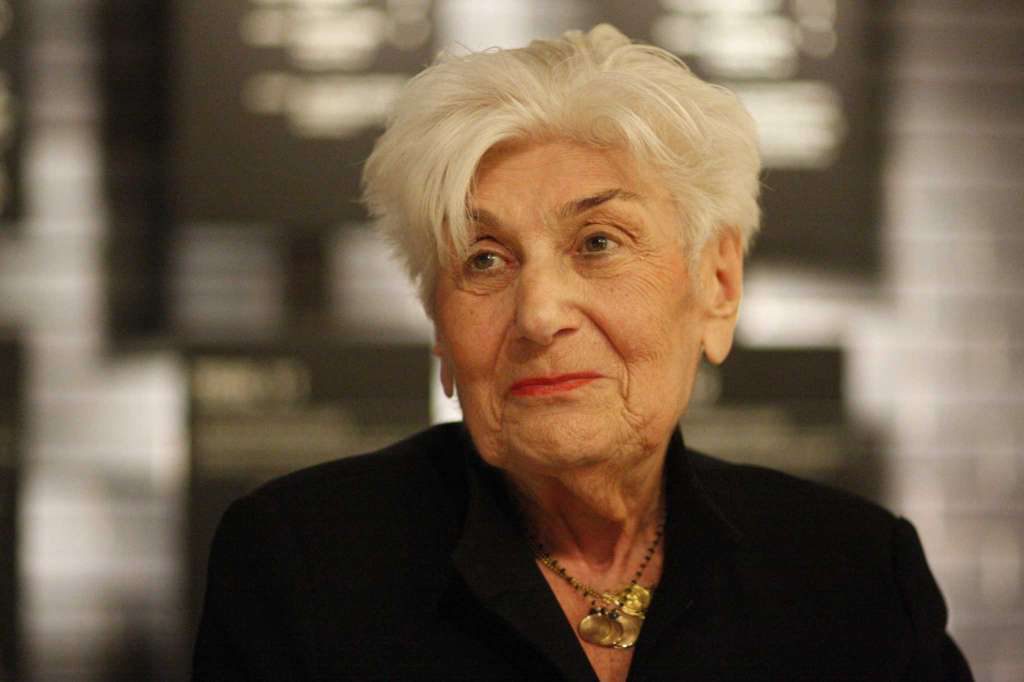 Naomi Warren grew up in Wolkowysk, a small city in eastern Poland. She was part of a large, cultured, and highly educated family, where Jewish traditions complemented secular pursuits…. Decades later, Naomi still recalls the wonderful aromas that came from her mother’s kitchen during the Jewish holidays. Naomi was finalizing arrangements to attend a university in England when Germany invaded Poland in September 1939, foiling her plans. Shortly after, Soviet troops marched into Poland from the east, occupying her hometown. The Soviet presence offered liberation of sorts: since Jews were no longer limited by quota in Polish universities, Naomi could enroll at the university in nearby Bialystok. At the beginning of 1940, she married Alexander Rosenbaum, a young physician she met on the train to Bialystok. In the summer of 1941, Germany overran eastern Poland and began systematically isolating, interning, and murdering its Jewish population. Naomi and Alexander were sent to Auschwitz-Birkenau in January 1942…. They were separated when they arrived, and Alexander was sent to the men’s camp where he perished several months later…. Despite Naomi’s determination, constant work and starvation rations took their toll…. But she toiled on because she knew that if she stopped, she would be sent to the gas chamber. Naomi endured almost three years in Auschwitz-Birkenau. As Soviet troops approached in the beginning of 1945, she and her fellow inmates were sent to Ravensbruck and then to Bergen Belsen.

When the British liberated her there in April 1945, Naomi felt as if “the whole world opened up” for her. The following year, Naomi came to Houston with the help of [relatives]…. In 1949, Naomi married Martin Warren and together they established a business importing Danish hams to the United States. They had three children – Helen, Geri, and Benjamin. Naomi and Martin worked together until he became ill and died in 1960. [Naomi subsequently became a very successful businesswoman and committed philanthropist, much honored and revered. She passed away in 2016.]

Says Stephen Mills, “I am grateful to Naomi Warren and the many survivors who shared their testimonies during the creation of this work. I am forever changed by this knowledge and hope that by my sharing Naomi’s story, others will be affected to fight indifference and intolerance when witnessed.” 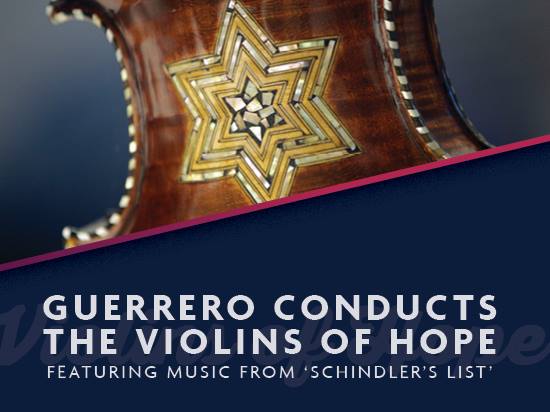 Don’t miss your Nashville Symphony’s gorgeous, heartwrenching program in March featuring the Violins of Hope, a collection of instruments played by Jews during the Holocaust.

PERFORMANCES at the Schermerhorn: 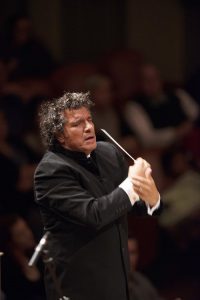 Come early to the concert for a Classical Conversation with Maestro Giancarlo Guerrero, taking place one hour before the concert in the Balcony Lobby. Following the concert, Maestro Guerrero will lead an informal Q&A at the back of the concert hall, on the Orchestra Level.

Each instrument has a story. 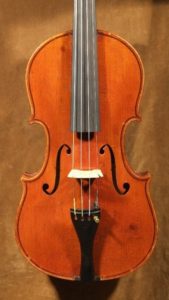 In July 1942, thousands of Jews were arrested in Paris and sent by cattle trains to concentration camps in the East – most of them to Auschwitz. On one of the packed trains was a man holding a violin. When the train stopped somewhere along the sad roads of France, the man heard voices speaking French. A few men were working on the railways and walking at leisure. The man in the train cried out:

“In the place where I now go, I don’t need a violin. Here, take my violin so it may live!”

The man threw his violin out the narrow window. It landed on the rails and was picked up by one of the French workers. For many years the violin had no life. No one played it. No one had any use for it. Years later, the worker passed away and his children found the abandoned violin in the attic. They looked to sell it to a local maker in the south of France and told him the story they heard from their father. The French violin maker heard about Violins of Hope and gave it to us, so the violin will live.

A Violin with a Star of David 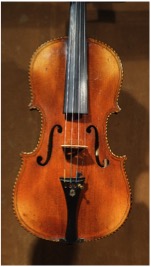 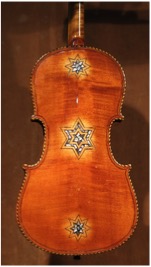 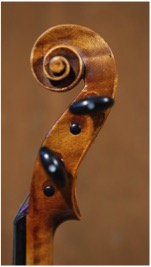 This is a lovely violin made originally for a klezmer musician. The restoration work is dedicated to siblings Wolf and Bunia Rabinowitz, both wonder-kids and talented violinists. Both played multiple concerts in the ghetto of Vilna during World War II, and both were killed with the last members of the ghetto, most probably in the forest of Ponar, about 10 km outside the city.

The Violin of Moshe Amiran

Here’s the story, as told by Moshe Amiran in Israel:

“In 1972-75, I lived in Santiago, Chile, where I met with a man who survived the war and found shelter in Chile. He was about 60 years old, spoke a broken Spanish typical to immigrants from Eastern Europe, and seemed rather lonely and poor. One day, he asked me to buy his old violin. I visited his home, where he showed me the number tattooed on his arm, but unfortunately, his name and address I don’t remember. The man told me that the violin belonged to his grandfather, who gave it to him in his childhood and swore him to keep it no matter what. Which he did…

In 1942, he was sent to a labor camp and then to Auschwitz-Birkenau, which he somehow survived with his violin. I paid him for his violin, feeling that I’m doing a mitzvah. As time went by, I put the violin away and forgot all about it. Three years later, I returned to Israel and discovered the violin inside one of my many crates. For a moment, I felt that the violin was following me so that one day it could tell its sad history.

Many years later, when my grandchildren grew up, I remembered the violin lying in the attic and decided to bring it to a violin maker I heard of, Amnon Weinstein in Tel Aviv. The rest is history, you may say. This violin does not play, but allow me to be poetic and sentimental and say that its silence is powerful, its silent strings touch hearts, and it is an authentic tombstone to many unknown and nameless violinists who died lonely and forgotten.

This violin wasn’t made by hand, but rather by using machines. Although it looks like a violin, it doesn’t produce any sound. This type of violin usually belonged to beggars who made believe they played, but actually sang the music.

The Violins of Hope will be on view at the Main Public Library March 26th – May 27th. Learn more about community-wide conversations at ViolinsofHopeNashville.org.

And to read more: 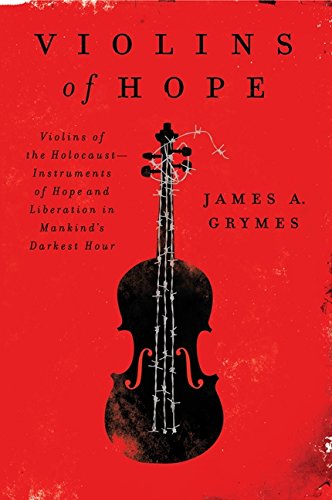 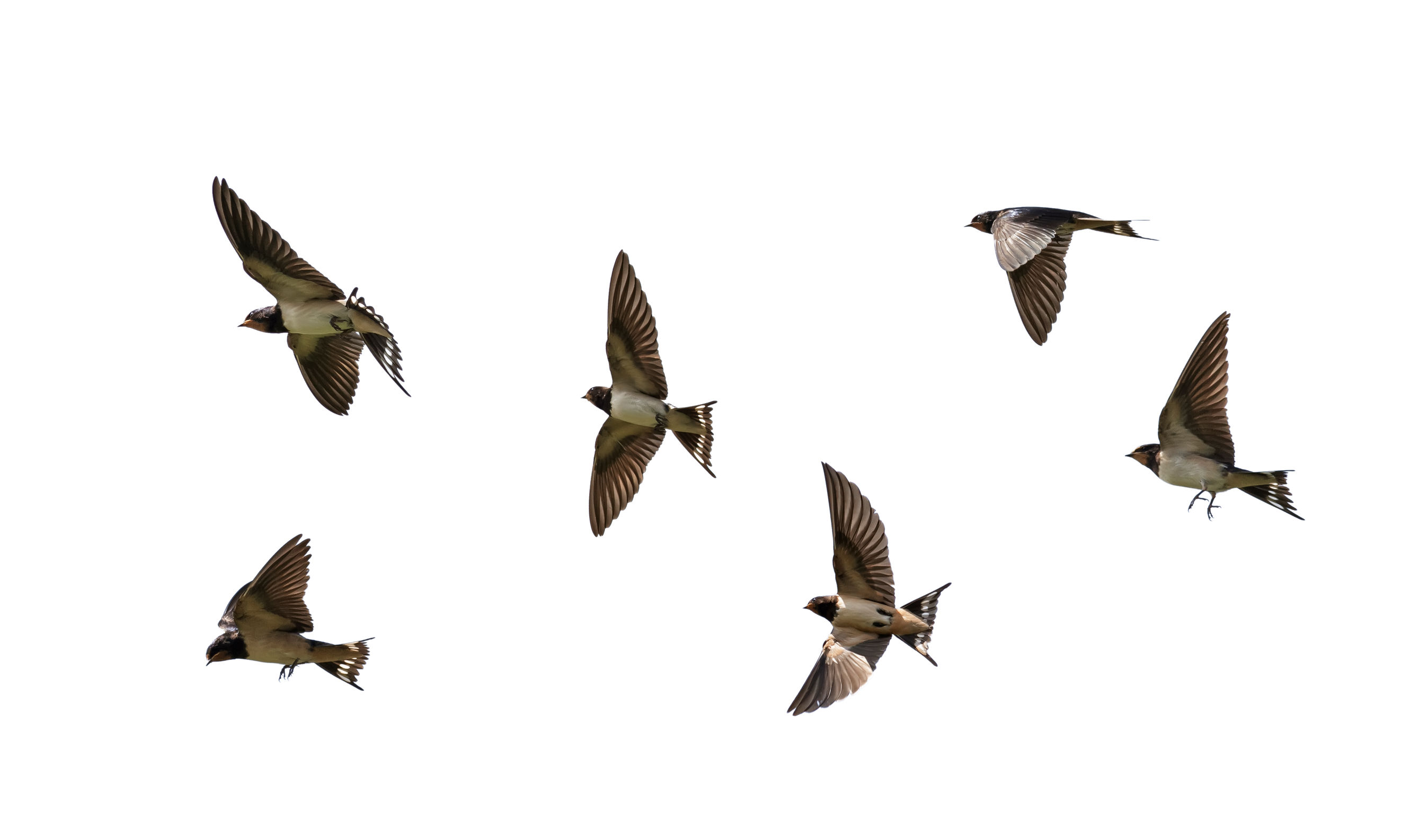