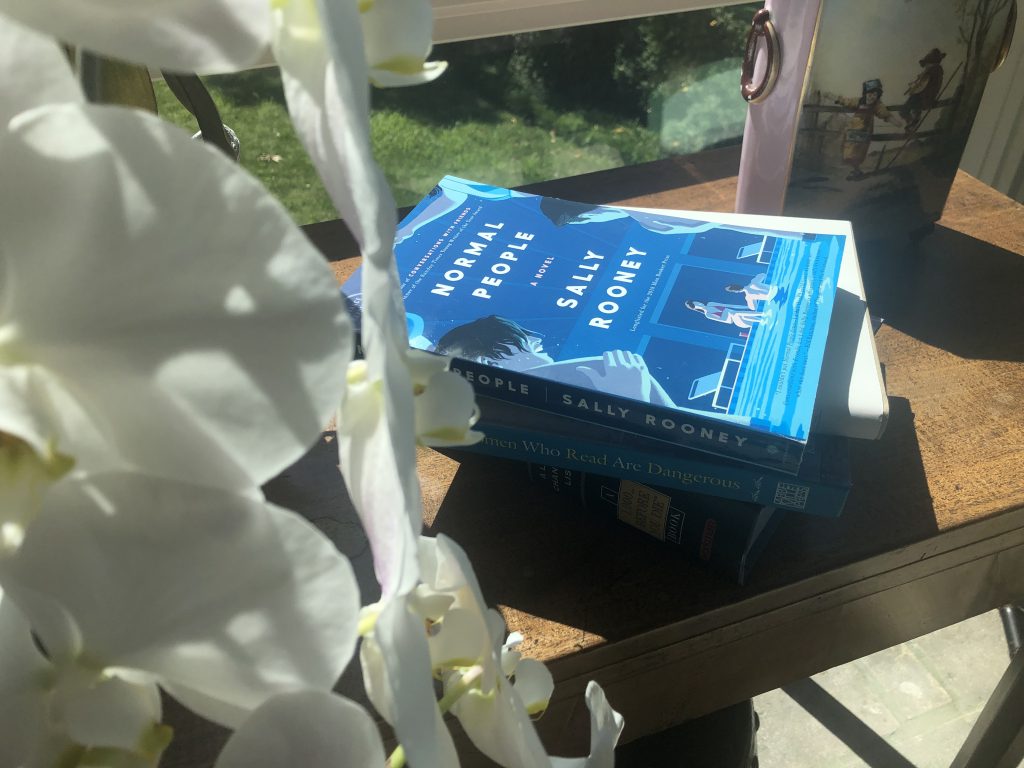 Marianne is an odd duck in high school, but she and star athlete Connell develop an unusual friendship in spite of their differences. It’s a little weird that his mother is her mother’s housekeeper. It’s complicated that Connell is popular, and Marianne is not. How will their friendship play out, in high school and college and beyond? Things are different once they get to university in Dublin. Each of them is growing up, trying to find their place in the world, trying to fit in. You may not be 18 or 20 when you’re reading this book, but this novel feels relevant – I think – at any age. It asks hard questions about what we owe each other, and who we become, and why. Does anyone ever feel normal? Normal People is on bestseller lists in the US and the UK and won this year’s Costa Prize; Sally Rooney is the youngest author ever to win it.

Normal People aims to tell deep truths. Good thing it’s a novel, for – as Samuel Clemens says – “The man has yet to be born who could write the truth about himself.” Clemens (aka Mark Twain) is a cheerful, vigorous pessimist in this, as in many things:

What a wee little part of a person’s life are his acts and his words! His real life is led in his head, and is known to none but himself… His acts and his words are merely the visible thin crust of his world… and they are so trifling a part of his bulk! a mere skin enveloping it. The mass of him is hidden – it and its volcanic fires that toss and boil, and never rest, night nor day. These are his life, and they are not written, and cannot be written.

But what if – from the grave – you had to tell the story of your life? Could you be honest then? Would you be regretful? Proud? Grateful? Confused? Content?

In the cacophony of life, would there be a melody in yours?

In his Spoon River Anthology, Edgar Lee Masters finds the tuneful – or dissonant – melodies in the lives of 212 souls in small town Illinois, as they speak from their graves. Some of the characters are based on real people, some are finely imagined, all are wholly believable. In Masters’ imagination, each person delivers a short poetic monologue accounting for his or her own life and death. We hear from doctors, lawyers, bankers, ministers; journalists, farmers, shopkeepers; husbands, wives, children; prostitutes, murderers. Published in 1915, Spoon River Anthology became a huge bestseller and catapulted Masters to fame for the rest of his life. A hundred and four years later, I couldn’t put it down. I loved reading about – normal people. 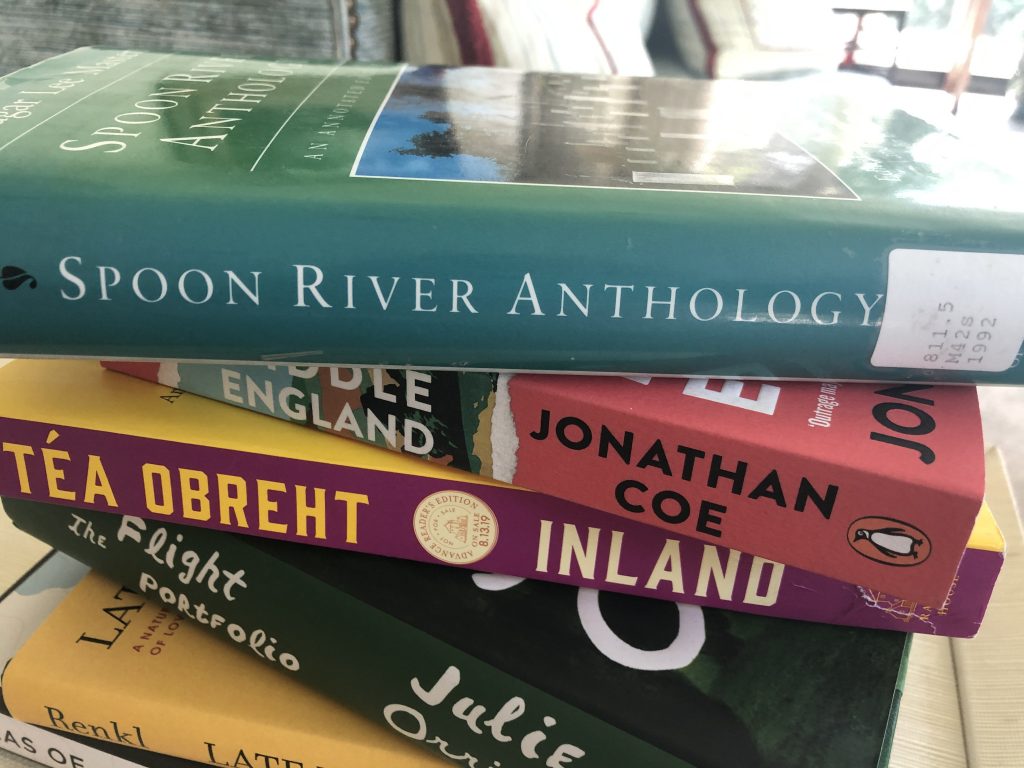 Toni Morrison also wrote about normal people. Normal black people. In years to come, she may be remembered as the 20th century’s Harriet Beecher Stowe. She’s not “the little woman who wrote the book that caused this great war” (as Lincoln is reported to have said to Stowe when he met her in 1862). But – upon her death – she is reported to have changed Literature.

I’ll quote him at some length and – encouraged by him – will read Morrison’s second novel, Sula. I’ll report back at Bacon on September 15th. I hope so much that some of you might join me on this reading journey and share your thoughts in the comments! 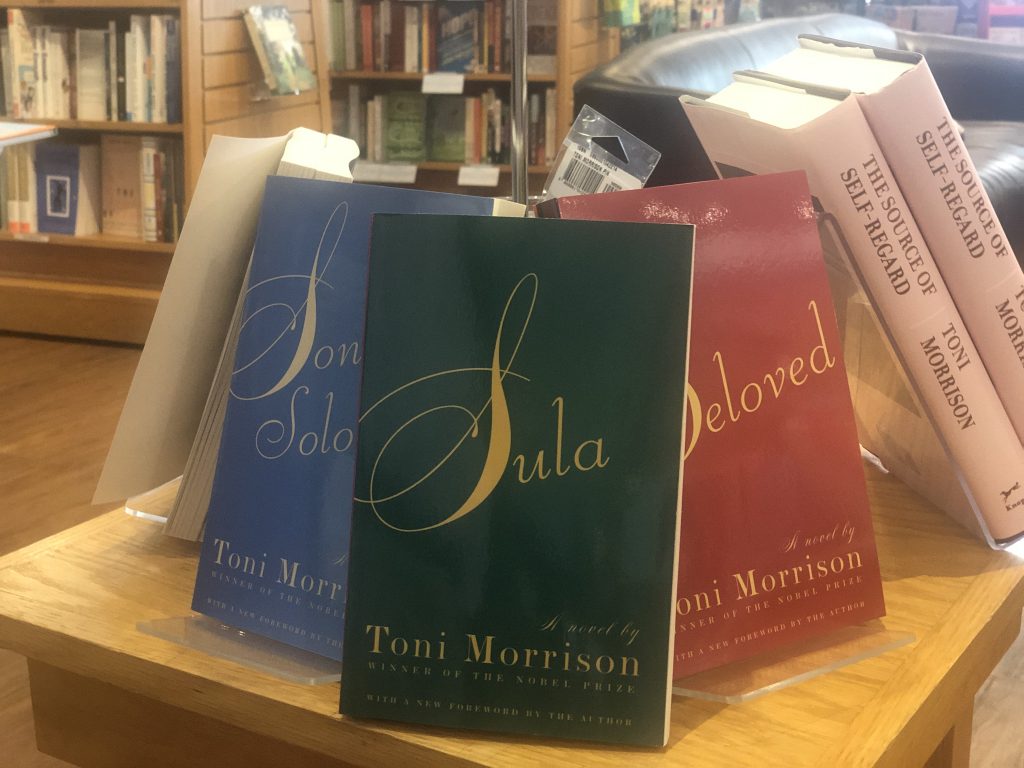 Toni Mor­ri­son liked to note, when im­por­tu­nate in­ter­view­ers won­dered when she was go­ing to write about some­thing other than the African-Amer­i­can ex­pe­ri­ence, that Tol­stoy didn’t in­tend his books to be read by black girls from Ohio. Her point was that no­tion of uni­ver­sal­ism is fraud­u­lent. To be a writer of any worth one must be a re­gion­al­ist. Tol­stoy’s sub­ject and au­di­ence was the 19th-cen­tury Russ­ian gen­try, and the truths he mined from that niche have en­sured “Anna Karen­ina” a place in every small-town li­brary in the world. Mor­ri­son’s fo­cus was on black Amer­i­cans, from their place in the found­ing colonies to the present day. When she died on Mon­day at the age of 88 she was the most glob­ally cel­ebrated Amer­i­can writer since Ernest Hem­ing­way and her books had re­made the field of fic­tion.

…Mor­ri­son had in­flu­ences, nat­urally. Joyce and Faulkner, two de­fi­antly pro­vincial writ­ers whose mod­ern mytholo­gies teemed with sym­bols and wild, be­spoke lan­guage, are the most in­ter­est­ing. But there re­ally was no prece­dent for the sort of books she con­ceived. She was a sin­gle mother of two and a full-time ed­i­tor at Ran­dom House when she wrote her first novel, “The Bluest Eye” (1970), about a black girl who judges her­self by white stan­dards of beauty. She was moved to write it, she said, be­cause the story in­ter­ested her and no­body had told it be­fore. The same went for her grace­ful, in­ti­mate sec­ond work, “Sula” (1973)—this read­er’s fa­vorite—about a friend­ship be­tween girls, a sub­ject then so un­com­mon that the book was con­sid­ered a cu­rio. From the start, Mor­ri­son obliged read­ers to meet her on her own terms. “I’m gonna stay out here on the mar­gin,” she told an in­ter­viewer, “and let the cen­ter look for me.”

… As Mor­ri­son’s cul­tural im­por­tance grew, her fic­tion be­came more er­ratic. (In this, too, she was not un­like Tol­stoy.) “A Mercy” (2008), a brief, scythe-like novel set in the colo­nial pe­riod, is a work of star­tling force and em­pa­thy, whereas “Home” (2012) and “God Help the Child” (2015) are thin reprisals of ear­lier themes. But the later nov­els were largely over­shad­owed by Mor­ri­son’s role as a wise and un­spar­ing el­der stateswoman pa­tiently ac­cept­ing hon­ors from a gen­er­a­tion that felt in her debt. A pen­e­trat­ing non­fic­tion col­lec­tion pub­lished ear­lier this year, “The Source of Self-Re­gard,” gives a sense of the range of her think­ing as well as her calm, almost godlike authority.

… Even so, she never re­tired from the job of writ­ing nov­els, as did some of her cel­e­brated con­tem­po­raries. (Her pub­lisher has con­firmed that, at the time of her death, she had a book in progress.) Her work is af­flicted by the past, haunted by it, en­am­ored with it and in­spired by it, but it wasn’t her style to re­sign her­self to liv­ing there. “Me and you, we got more yes­ter­day than any­body,” Sethe’s dogged suitor Paul D tells her in “Beloved.” “We need some kind of to­mor­row.” Per­haps Mor­ri­son’s great­est gift was her dou­ble-sight­ed­ness, her ca­pac­ity to look as clearly at what was ahead of her as at what lay be­hind. We haven’t fully reck­oned with what she hoped to show us, and writ­ers will dis­cover much more yet to guide them into the fu­ture.

Many thanks to Jack Barnwell for sharing the Samuel Clemens quote with me. 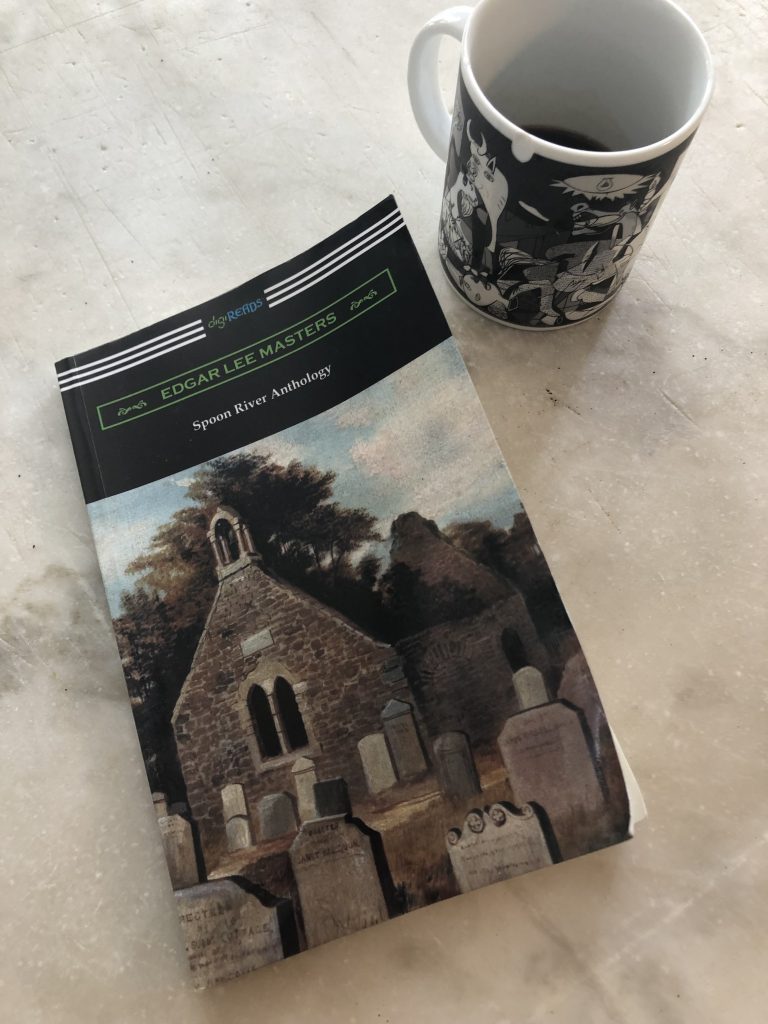 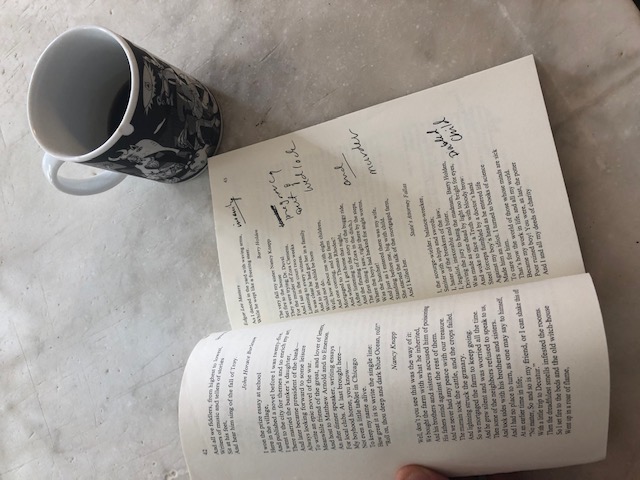