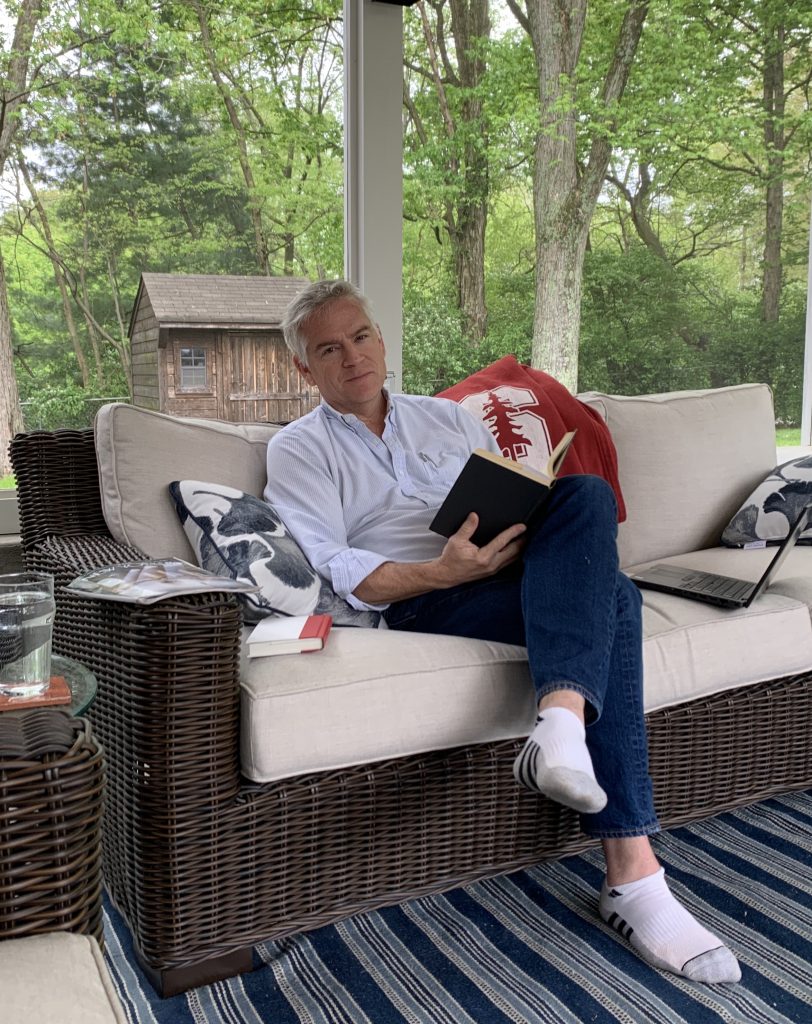 Sean Kinch makes a strong case for Hilary Mantel’s new novel, The Mirror and the Light (in his socks, from his back porch, making quarantine look good). He calls his review a “nudge to fence sitters,” and I think you’ll enjoy it as much as I did!

From the start of the COVID-quarantine, readers saw the upside: less time commuting and socializing means more time for books. Many of us followed that initial thought with another, more ambitious prospect: I will use this enforced isolation as an opportunity to tackle some of the beastly tomes haunting my shelves, intimidating lesser books and, frankly, giving me the evil eye every time I cross their paths. Some of us picked up Melville, some Tolstoy, some figured it’s now or never for Anthony Powell’s Dance to the Music of Time or, maybe, finally, all 3000 pages of Proust’s Recherche.

For those of us who loved the first two of Hilary Mantel’s Thomas Cromwell novels, the mandate to “stay at home” arrived simultaneously with the publication of The Mirror and the Light, the 757-page conclusion of the Tudor trilogy. I posted on Facebook, in a defiant tone, “Quarantine me, please – I’ve got Mantel’s new one.” I read it systematically, fifty pages a day, enough for characters and conflicts to sink into my subconscious but not so much that I became overwhelmed. Some reviews claim that The Mirror and the Light is “baggy,” that Mantel became too infatuated with her conceit to get on with the action. Hogwash. It’s brilliant, page by page, nuanced and vibrant, with surprising emotional impact. 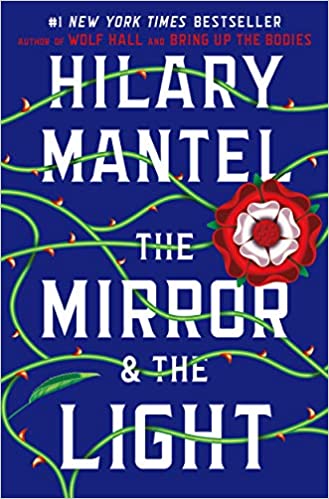 Still, some of you may be undecided, intrigued by the novel’s premise but daunted by its length. What follows are eight thoughts about the novel, in no particular order, with a single purpose: to convince you that The Mirror and the Light is worth the investment of your time.

1. The Mirror and the Light is perfect reading for quarantine.

This novel rewards long reading sessions, allowing the large cast to be individuated as characters and the subtleties of the conflicts to clarify. Mantel includes a seven-page Cast of Characters, three-dozen speaking parts, each with titles and quirks that require time to coalesce in one’s imagination. Cromwell and Co. become the social life you’re missing out on as you walk the dog, again, and bark at your kids to stay out of the fresh air and remain glued to their computer monitors.

2. Does The Mirror and the Light work as a stand-alone novel?

Short answer: yes. Wolf Hall was a one-off exercise, as far as I knew, though I was delighted when I heard the news that Mantel was working on a sequel. Bring Up the Bodies, the tightest of the three, has one major question – how to get rid of Anne Boleyn – with endless Cromwellian machinations to achieve the king’s desire. That second volume stands by itself as a crucial episode in the ongoing adventures of Hank and Tom, but if you read it alone you wouldn’t appreciate the scope of Cromwell as historical phenomenon. The Mirror and the Light is best equipped of the three to stand alone, as it includes flashbacks to all the signal crises in the past, but most readers picking it up now are likely to be Mantel’s ready audience. As much as I admire Mirror, I recommend you start with Wolf.

The hero of The Mirror and the Light is a different character than the one who snaked his way to power in Wolf or the court insider of Bodies who exacted revenge on his personal enemies while pursuing the king’s plans. Now he sits next to the throne, a step from the summit, a target for his rivals. One lesson in Mirror is that it’s harder to survive success than to endure hardship. “We never know how to take it when our life begins to be charmed,” Cromwell thinks. But he can’t resist the lure. His downfall, unjust on paper, results from hubris, despite his knowing better than anyone where pride goeth. When King Henry makes plans, in the event of his death, for his infant son Edward to ascend to the throne, Cromwell wants the scepter until the lad reaches maturity. “Do it,” Cromwell thinks. “Draw up a paper. Make me regent.” Cromwell never utters a treasonous word, acts only the king’s interest, would readily lay down his life for his sovereign… and yet. He is Icarus and Daedalus in one, warning himself not to soar even as he reaches for the star.

As with Thomas Pynchon, in Mantel everything outrageous is real. The northern revolt, the slitheriness of Reginal Pole, rumors of Cromwell’s secret engagement to Lady Mary – all based on actual events. But it’s also not history, certainly not History, in two important ways. Mantel uses “invented characters” (her term), including Cromwell’s German daughter, who are plausible but not verified, in order to draw out nuances of her hero’s character. Also, Mantel is uninterested in events that would occupy the center of a historical study (why did the northern revolt gain such momentum?) if those conflicts don’t feature Cromwell in a leading role. Cromwell couldn’t be bothered to confront the rebellion in person, so it remains in the background. Search “Pilgrimage of Grace” at your library if you want the full history; with Mirror, you get all Cromwell, all the time.

5. Is Mantel’s Cromwell truly a creature of the 16th century?

Mantel believes that in summoning Cromwell to the page she has communed with his spirit (and, based on the evidence, I have no cause to disbelieve her). The resulting literary character is the quintessential man of his age -who more than anyone understood its moods and anxieties, trade secrets and official channels, master of text and subtext – who at times sounds like a 21st-century ironist who knows that a truth can sometimes contain its opposite. His views on the reformation of the church, the evolution of the aristocracy, the investment of the government in work programs – all the political beliefs that make Cromwell appear most modern are grounded in the upheavals led by Wolsey and by Cromwell himself. Perhaps Mirror will help us see that a) the modern age began a long time ago (before Cromwell, even), and b) Henry Tudor is alive in our world today.

Don’t hold your breath, but be on the lookout for Eustache Chapuys, ambassador from Emperor Charles V and familiar from the previous volumes, a lively presence and Cromwell’s preferred sparring partner (Chapuys calls him Cremuel). Though their monarchs often put them at odds, they are kindred spirits who enjoy their banter. Look also for Cromwell’s gimlet eye for absurdity. But I won’t mislead you: Mirror is not a comedy, in any sense.

7. The title sounds too poetic

I agree. After the stone-solid reference of Wolf Hall and the apt portent of Bring Up the Bodies, The Mirror and the Light sounds like a Philip Pullman fantasy or one of C.S. Lewis’s preachy tracts. The title refers to the king’s role for the nation, reflecting its character and leading it into the future. The irony is that Cromwell himself has long been the king’s beacon; now he becomes Henry’s mirror. And the king doesn’t like what he sees.

8. The wit and wisdom of Thomas Cromwell

Every chapter contains kernels, all of them complex and difficult. Don’t look for Poor Richard bromides or Thomas Merton reassurance. Cromwell knows that being king requires striking a razor’s edge balance between good intentions and political reality. “The archbishop tells Henry how to be good, and I tell him how to be king,” Cromwell says. “We try to persuade him that great kings are good kings, and vice versa.” Cromwell has no need for Machiavelli, having grown up with a domestic tyrant for a father. “Listen, son, this is what I know: right is what you can get away with, and wrong is what they whip you for,” Walter tells him. The king quotes Hippocrates, “Life is short and art is long, the opportunity sudden and fleeting, experiment dangerous, judgement difficult.” Cromwell recalls Chaucer’s more pithy line, “The lyfe so short, the craft so long to lerne.”

The Mirror and the Light may appear long, but it passes quickly, leading one to turn back to the first volume with its urgent opening line, “So now get up.”

Sean Kinch grew up in Austin and attended Stanford. He earned a Ph.D. from the University of Texas. He now teaches at Montgomery Bell Academy in Nashville and additionally writes book reviews for Chapter16.org. Click here for his latest review.