Everybody has to die of something.

I didn’t say “everyone” on purpose. Every Body has to die of something. Yet we cannot bear to let a loved one die. We don’t much like to think of our own death.

Underneath much of the conversation during Life in the Time of Corona lie these thoughts and half-thoughts, denials – and emotions.

The 19th century was better at death, at least in Western culture. The 19th century dealt with death all the time, as evidenced in their art. Also their music. And their books.

We are the privileged in 21st century America. Each of us can go to an Emergency Room and not be turned away. We feel that we have the right to deny death – or at least delay it. The 19th century felt no such right, and no such hubris.

I’m glad we are more frightened of death than they were. I am proud that we are. We benefit from the efforts of all who have come before us, in science and also in government. Life and death are always political questions. Yet we have things to learn from the 19th century too.

Today, I’m offering you a song from one of the greatest artists of the 20th century. Choose the life you want, and choose your remembrance.

Two priests came ’round our house tonight
One young, one old, to offer prayers for the dying to serve the final rite
One to learn, one to teach which way the cold wind blows
And fussing and flapping in priestly black like a murder of crows

Blessed are the poor

For they shall inherit the earth 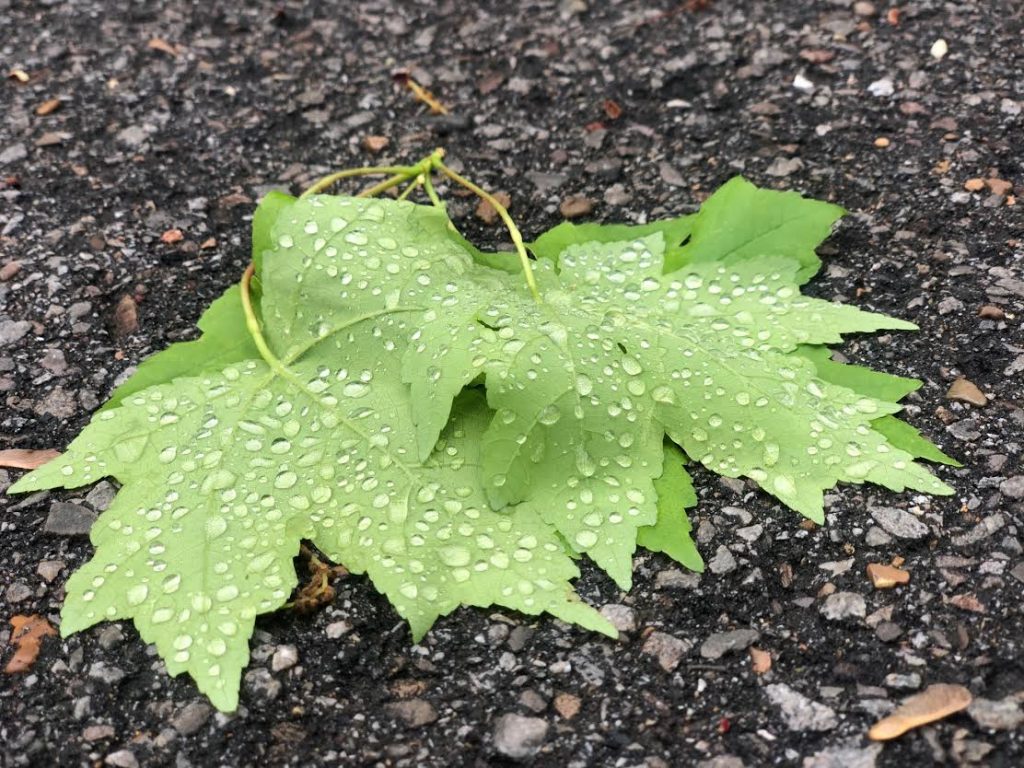 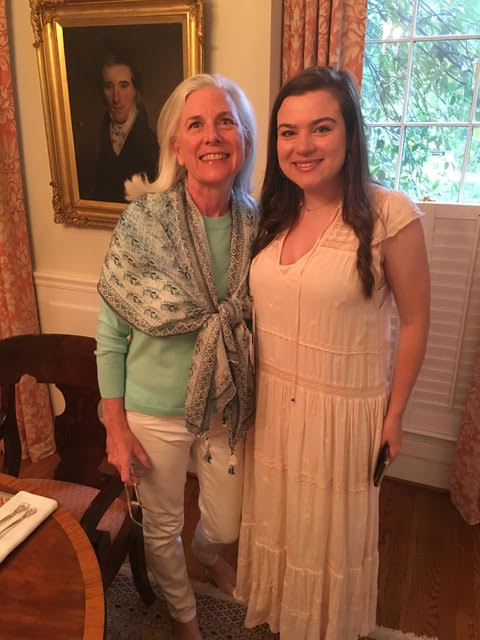 Many of the public spaces that house Nashville’s creative community have closed their doors due to COVID-19 forcing creatives from chefs to musicians to dancers to alter their offerings or take their programming online. The temporary closure that hit particularly close to home for me is that of the Frist Art Museum which had just opened four new exhibitions anchored by the spectacular J.M.W. Turner Quest for the Sublime, February 20 – May 31, 2020. I’m a new docent at the Frist and thought Bacon readers in Nashville and beyond might like to learn more about this beautiful exhibition using links to printed materials found on the Frist website and some of my iPhone photos from our late February docent walk-throughs with David Blayney Brown, curator of 19th-century art at Tate Britain in London, and Mark Scala, chief curator at the Frist. All works in this exhibition have come from Tate. To get a feel for the magnitude of this exhibition, which began as the dream of Frist Art Museum founders two decades ago, you can read John Dorfman’s article in the current issue of Art and Antiques, “The Heights of the Sublime: The Frist in Nashville hosts a visiting delegation of Turner masterpieces.” 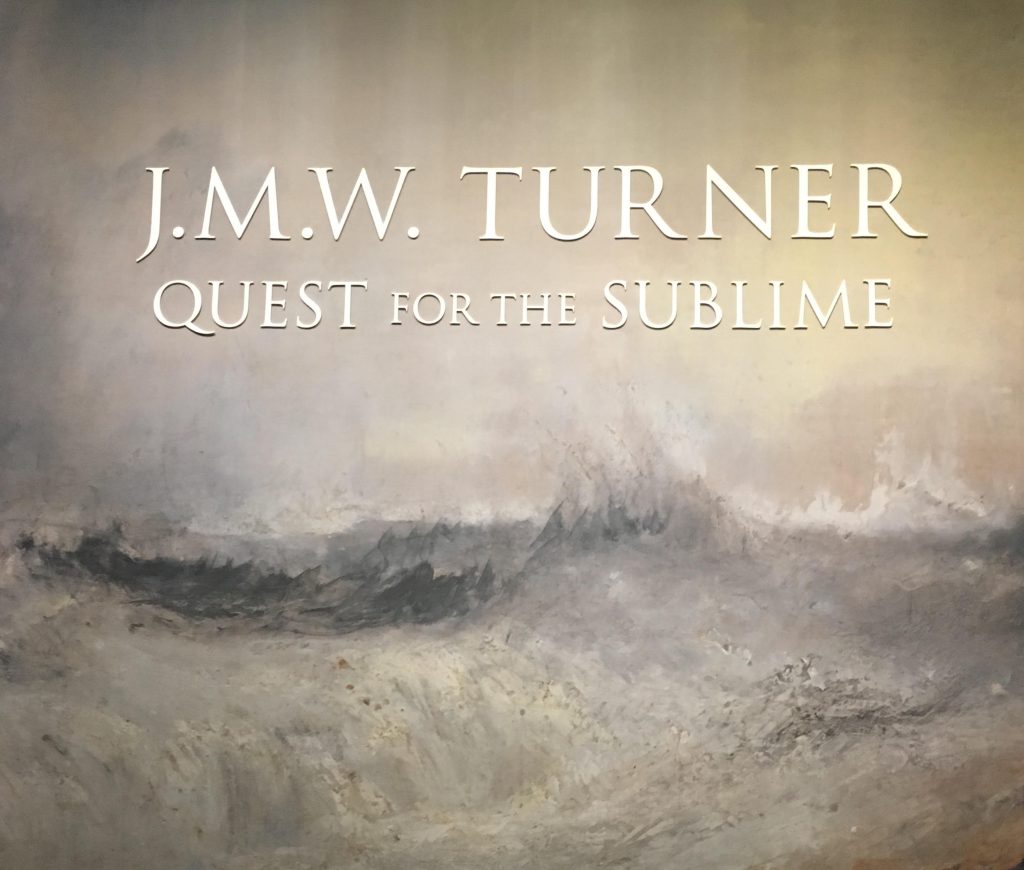 Joseph Mallard William Turner (1775-1851) is considered by many to be Britain’s greatest artist. While you may be familiar with some of his seascape oil paintings, there is much more to his vast body of work including thousands of watercolors. The gallery guide provides an excellent introduction to Turner and the exhibition.

One of my favorite rooms in the exhibition is tucked away in a side gallery painted a rich, deep burgundy and includes one of Turner’s sketchbooks under glass accompanied by a “swipe-able” iPad with photos of each page from the sketchbook. 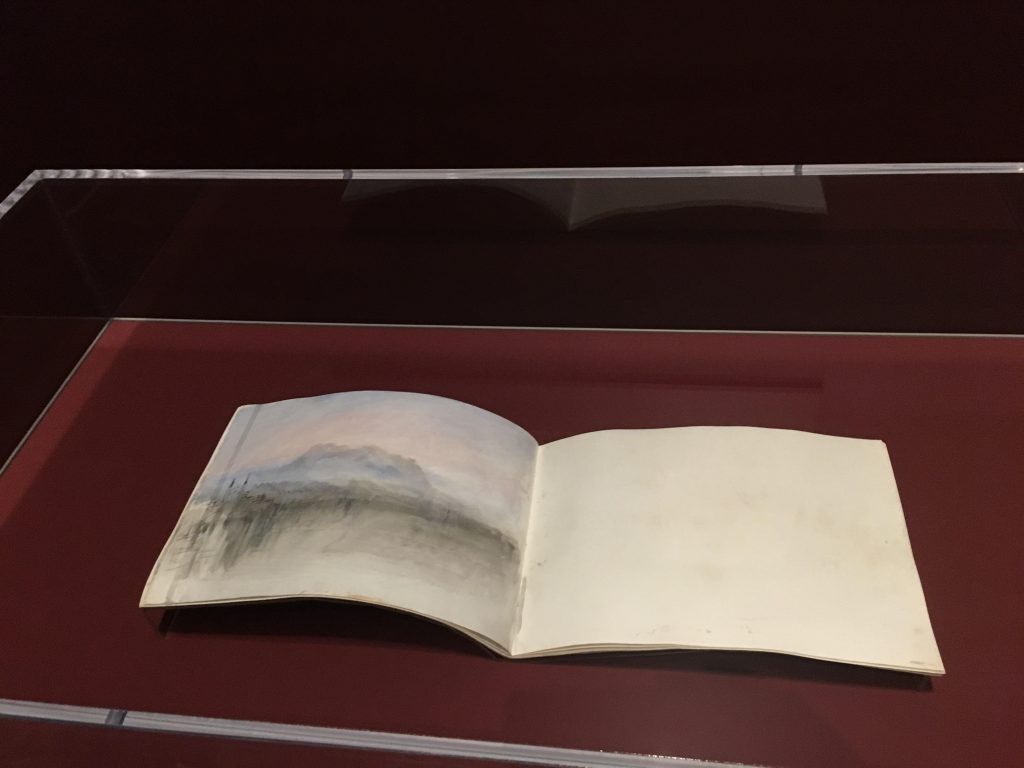 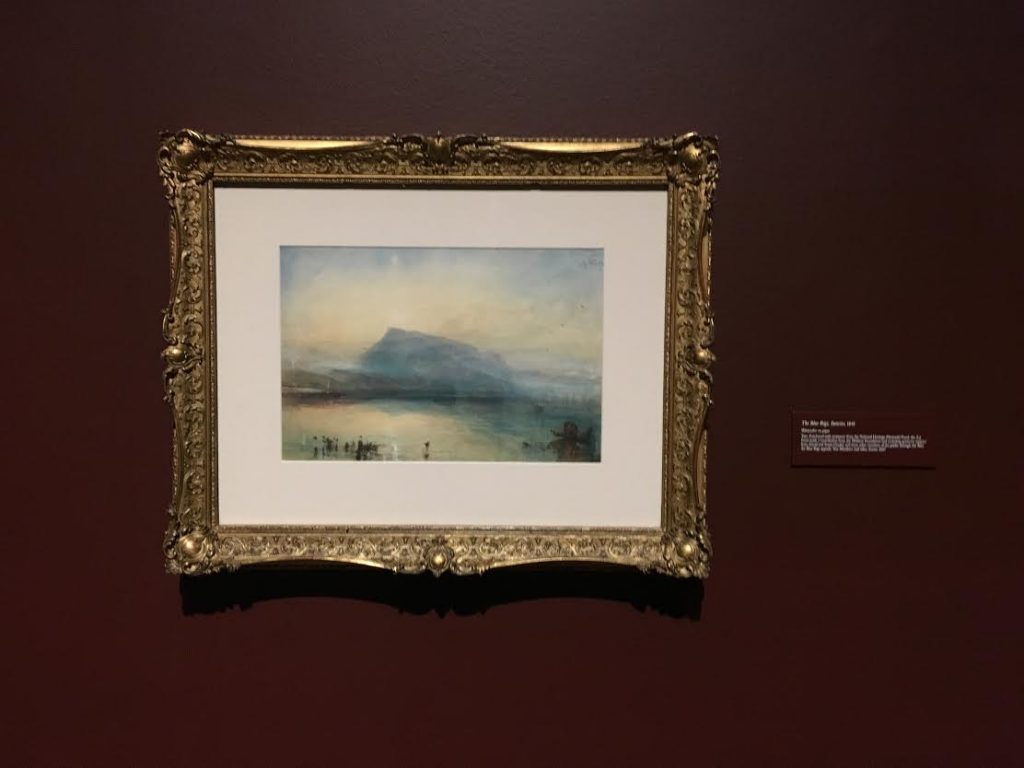 and of Lake Lucerne… 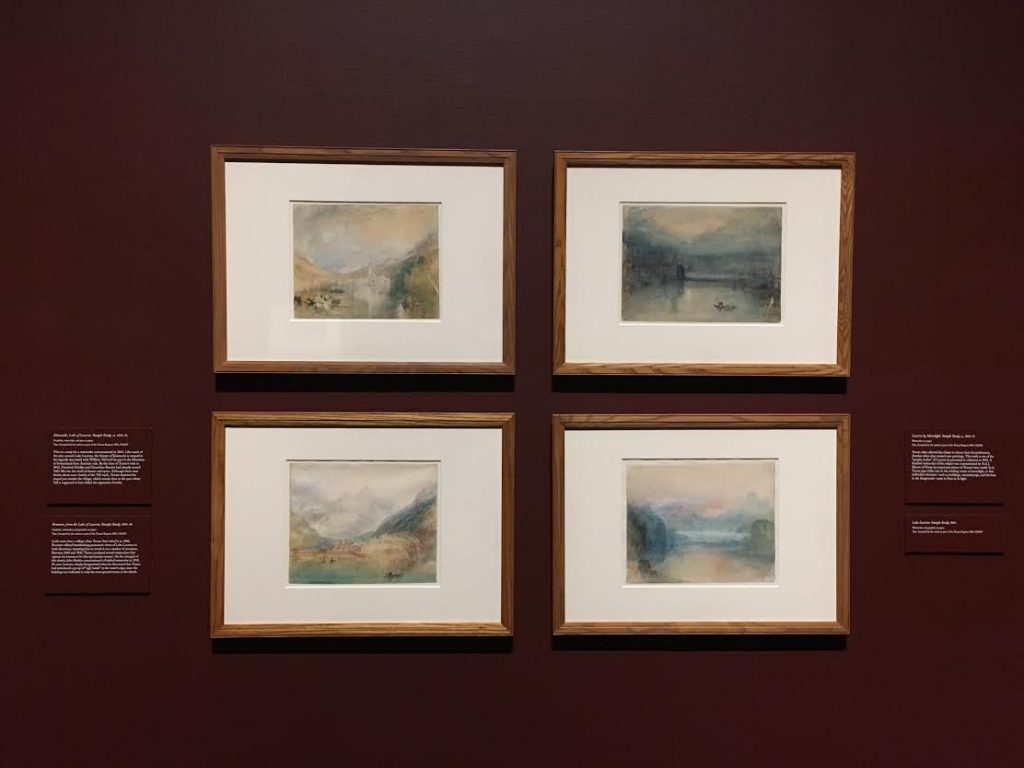 … made in varying weather conditions with different lighting that might remind one of Monet’s haystack series. And, to put Turner and his brilliance in historical perspective, these works were created in the 1840s while Monet’s haystacks were painted between 1890-91, nearly 50 years later.

The focal point of one of the main galleries in the exhibition is “The Deluge”, one of Turner’s large, earlier works depicting the Biblical flood, but what I found even more amazing were the two, smaller, more abstract, 31’ x 31” square canvases depicting the “morning after” and the “evening of” the deluge. 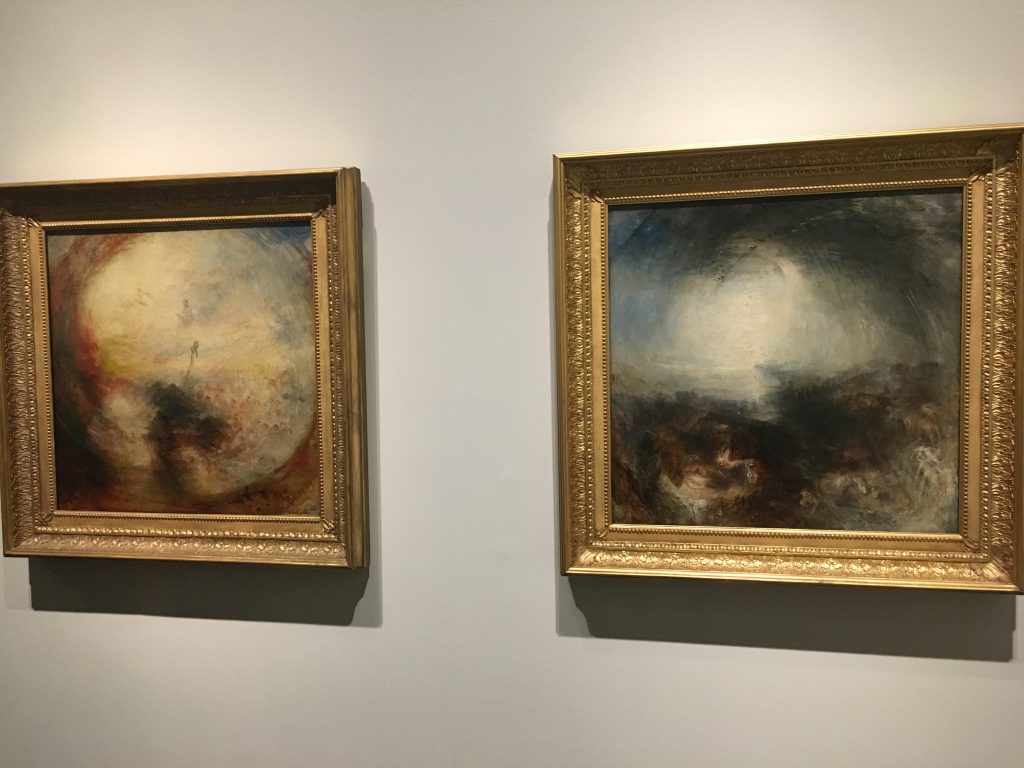 The swirling, circular vortex in each painting drew me closer and drew me in. A similar swirling sky is the focal point of the next gallery’s “Snow Storm: Steam-Boat off a Harbour’s Mouth”. 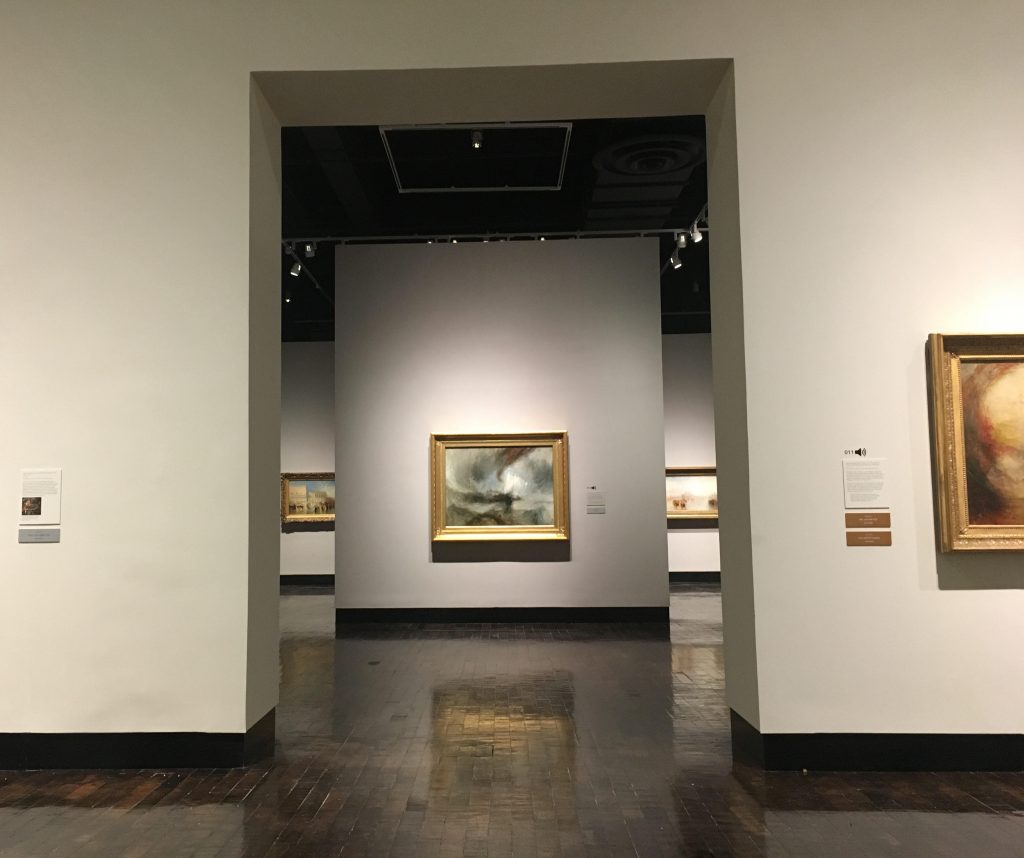 Turner’s skies have stayed with me, and I’ve begun to take note of our own late afternoon and evening swirling skies. 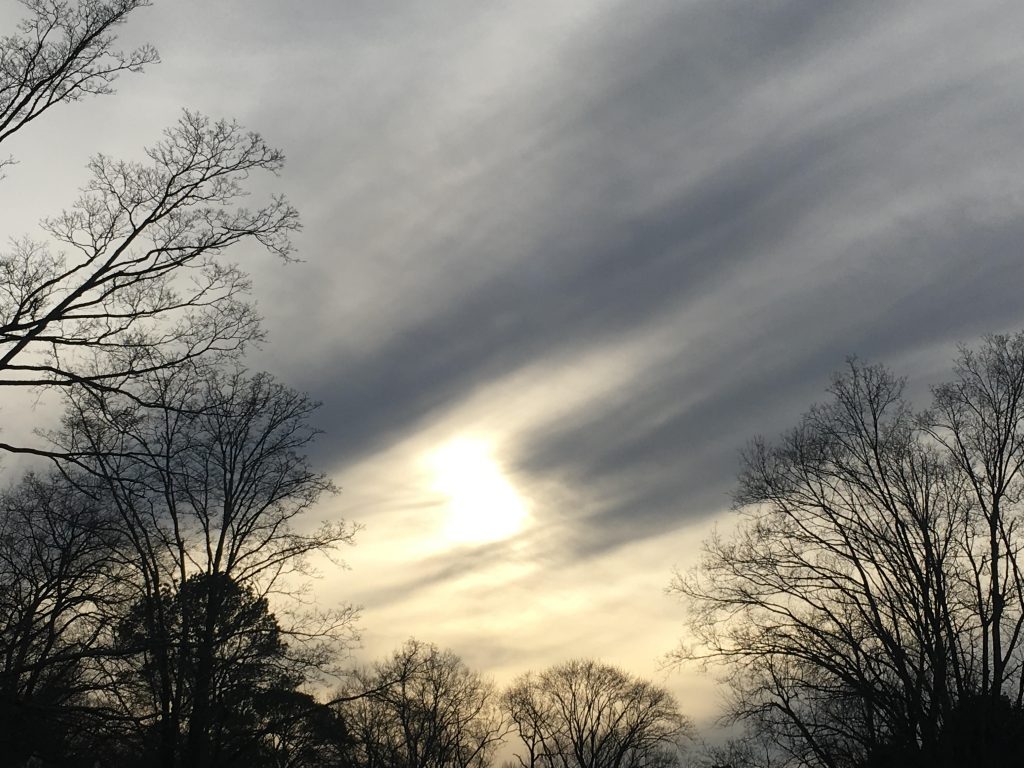 If you’re looking for activities for your family, cloud and atmospheric weather observations are just one of many suggested activities in the Frist’s J.M.W. Turner Educator Guide. In addition, the Frist Looking Guide provides great ways to look at and connect with art whether in person or online.

One of my favorite works, “Peace — Burial at Sea”,  has an eerie connection to the current global pandemic. The painting depicts the burial at sea off the coast of Gibraltar of Turner’s friend, the artist David Wilkie who had contracted typhoid during his journey and died while onboard. His body was buried at sea so as not to spread the illness to those on shore. While the color black was not typically used this intensely in 19th c. painting, Turner chose to use the blackest black as a funerary color to memorialize his friend. 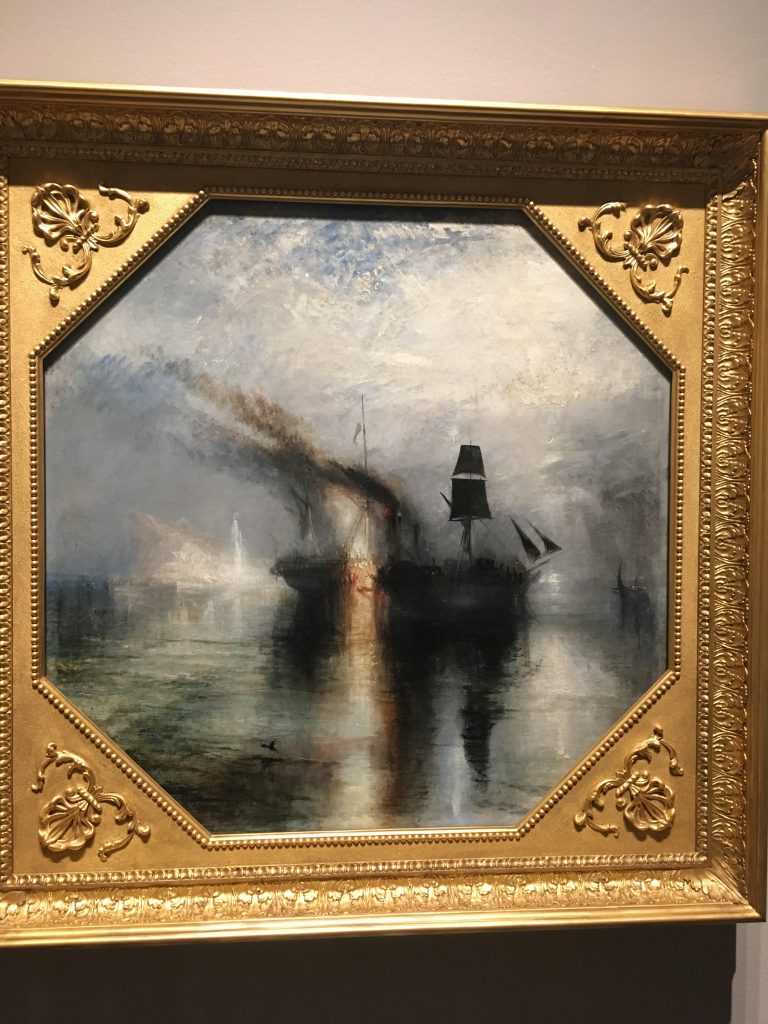 One work in the final gallery, Three Seascapes, caught the eye of veteran docent Teri Cohen who pointed out to the rest of us the visual connection between this piece and the work of 20th c. painter Mark Rothko whose paintings are known for their horizontal rectangles of color. The curators encouraged us to look at Three Seascapes both “right side up” and “upside down” in order to see the three different seascapes — a swath in the middle serves as the sky to one landscape and the sea to another. Fascinating! 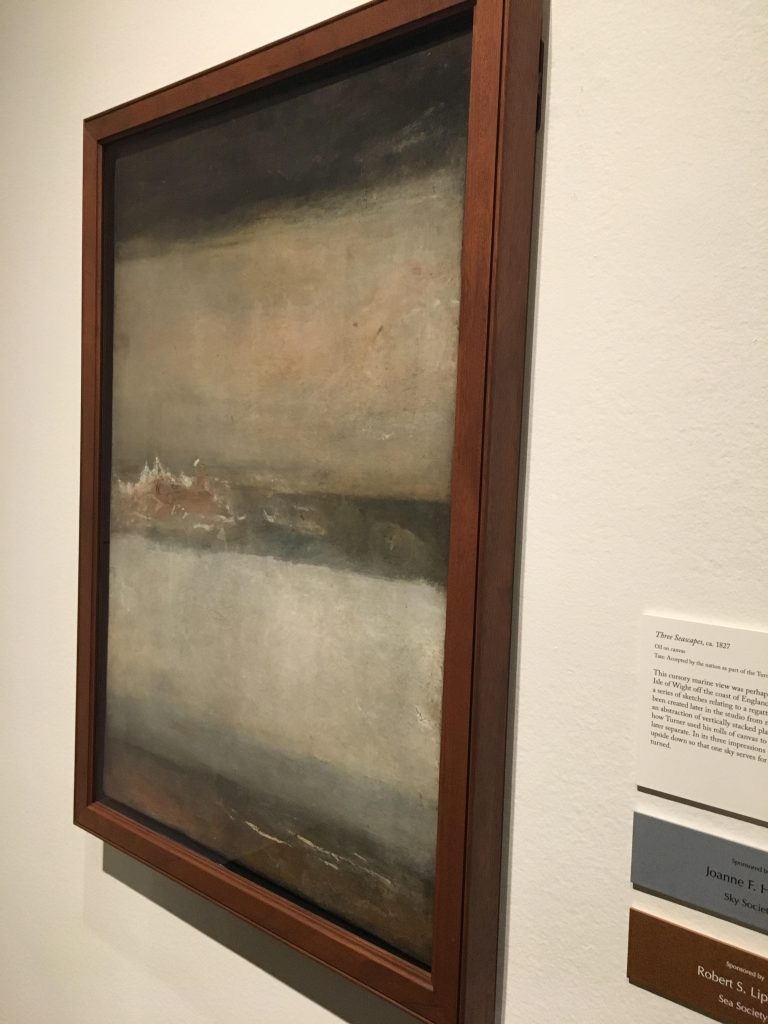 Teri shared additional information about the Turner-Rothko connection including that in 2009, works by Turner and Rothko were displayed together at Tate Britain.

I hope that you’ve enjoyed a quick look at just a few of the nearly 80 works in this stunning exhibition. You can find more images and information on the Frist website and via the Frist’s daily social media posts on Facebook, Instagram and Twitter. For an exercise in visualization, the exhibition audio guide is accessible via the Frist app, and for a deeper dive into art history, Jim Womack, art historian and retired Jackson Family Chair of Visual and Performing Arts at MBA, is presenting a three-part course via Zoom, and you might have time to catch the last installment, The Sublime as an Aesthetic, on April 21.

Thank you, Carolyn! What most inspires me about this post? An art exhibit can change the way you see our Nashville sky. xoxo