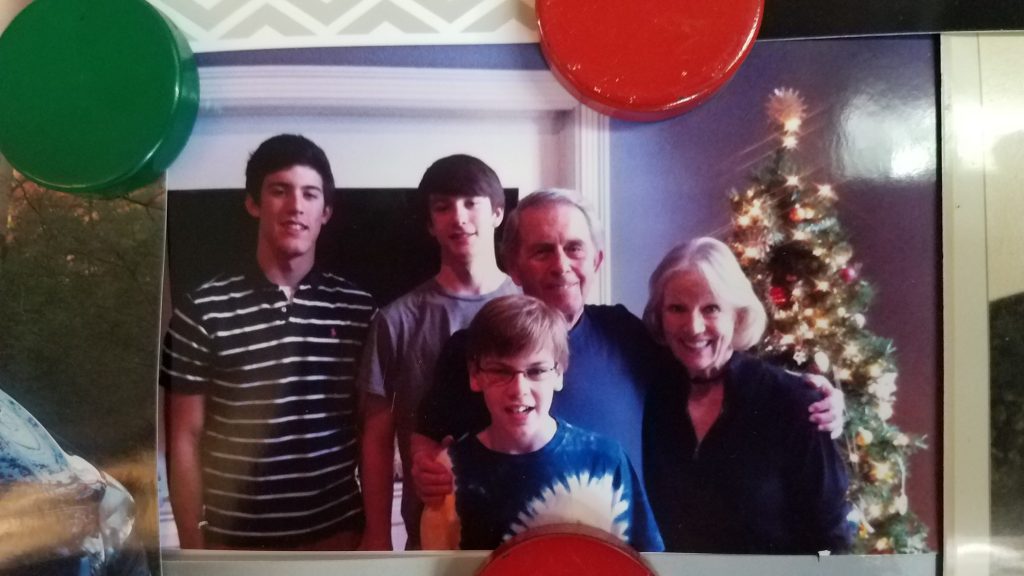 Today’s post in the “Life in America” series belongs to Brigitte Arenhold Porter, who grew up in Germany during World War II…

“I witnessed humanity at its very core when the US Allied forces liberated my old hometown in 1945. The Americans had ordered houses to be unlocked and all inhabitants assembled in one room. When the soldiers left, the black sergeant took the time to look at an 8-year-old girl cowering in a corner – he smiled and waved, saying “Good-bye.” Unforgettable.

In 1991, after the fall of the Wall, we could finally visit Weimar, the old center of Germany’s intellectual and artistic life and the concentration camp Buchenwald, just 6 miles away. There I saw a handmade small scale to weigh pieces of bread to be shared fairly among the prisoners. Unforgettable.

In May 1964, I could cradle my newborn son for the first time. Unforgettable….”

Thank you so much for spending some time in the Bacon Neighborhood, Brigitte. I’m so honored to feature you today.

You and your husband have lived in Nashville since 1959, right?

Yes – Dick taught at Vanderbilt for 41 years. He first taught in the English Department, then joined the German/Russian Department full time. He started the German exchange program, 1971 – 1973(what a happy and fascinating time for the three of us; our son was 7 years old and went to a German school). Dick later organized the summer exchange program for the Russian Department at Moscow State University. I received my B.A. and M.A. from Vanderbilt and finished all work on an NDEA scholarship but when told I could not teach full time at Vanderbilt because of the now-defunct nepotism rule, I left as a ABD (all but dissertation) and enthusiastically took up painting again. At Montgomery Bell Academy, I built up the German program to the AP level and taught there for 8 wonderful years; every day was a mini trip to Germany. In 1982, I raised the roof of our house for a studio – and have loved “that room of my own.” 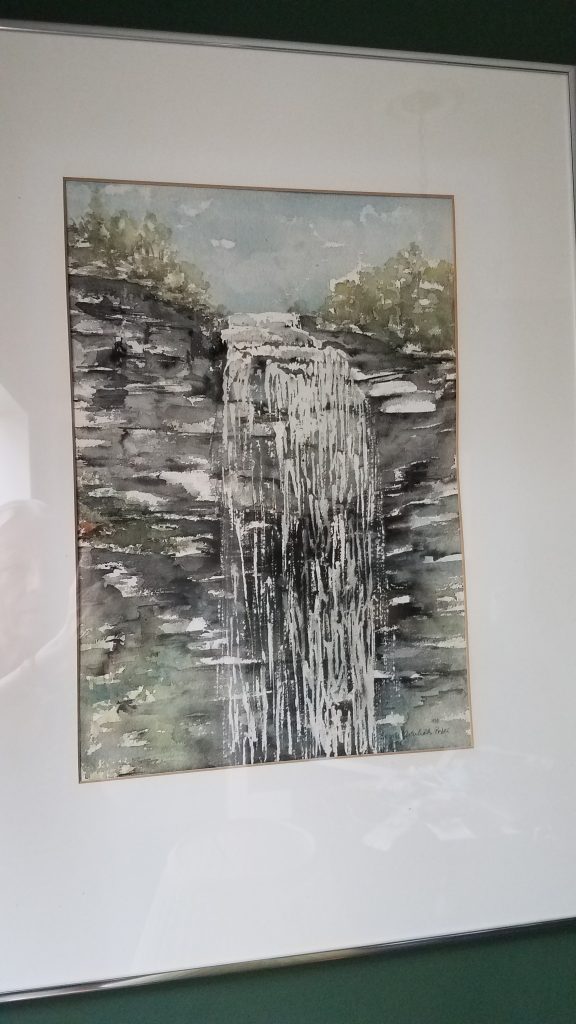 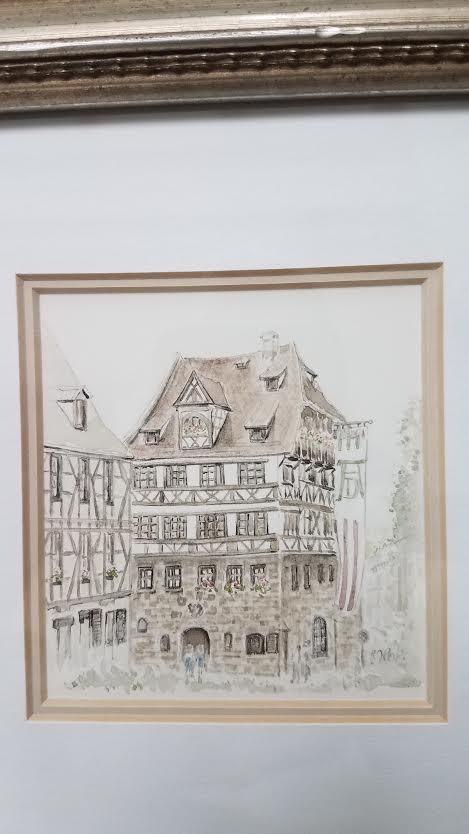 Dürer’s House in Nürnberg, celebrating Dürer’s 500th birthday, while we were living with Vanderbilt-in-Germany (pen and ink) 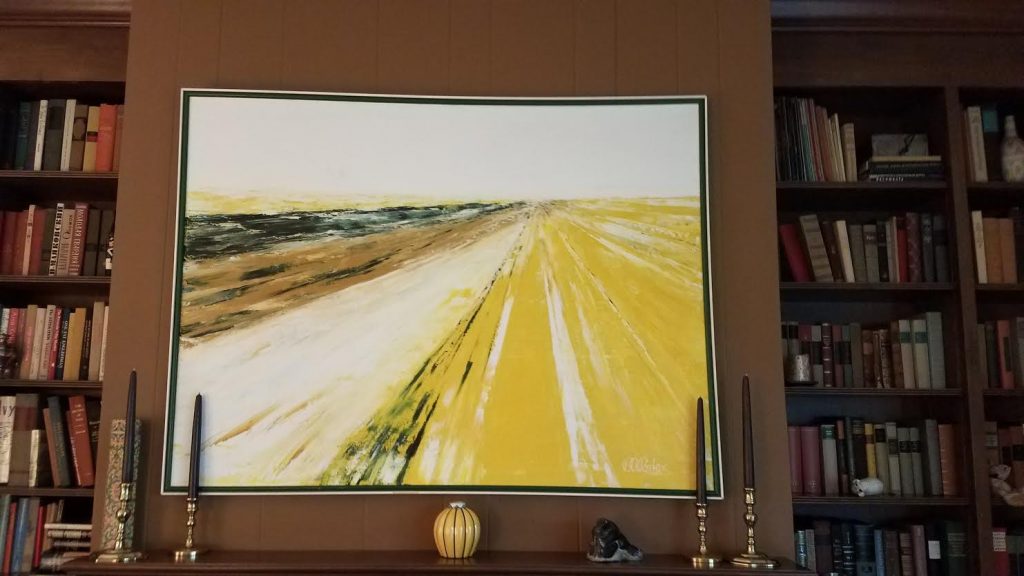 I’d love to ask you a few questions about your childhood. Let’s start at your old hometown. What do you remember of it?

I can recall Wolfenbüttel in great detail and affection. The town of about 50,000 celebrated 900 years of existence last year and is known for its magnificent library of medieval manuscripts, of half-timbered homes (my parents’ included), famous men like Lessing and Leibniz, and a princess born in the castle I later attended in high school, who started the Court of Muses in Weimar after having married the local prince there and built a library in Weimar that is registered as a Unesco Heritage sight. 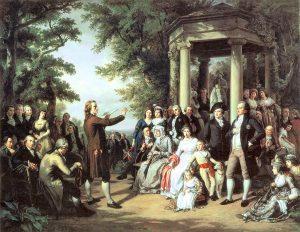 What kind of child were you?

Probably a somewhat difficult child: rebellious and headstrong. I remember wishing I were a boy; they seemed to have more freedom. I gave that notion up eventually.

What was life for you after the War?

The most dramatic event was after the Americans left – who allowed us to stay in our house upstairs, while they had taken over the first floor. In the early summer of 1945, Lower Saxony became a British occupation zone, and the British chose our house for administration purposes and evicted us over a weekend. That was really tough. I would crawl every day in the backyard past the garage, sit under the trees, glower at the house, hear music coming out of open windows and weep. My parents had managed to give my older sister and me a surprisingly ‘normal’ childhood with music lessons and all; one day, when I returned to my father’s business office, that was our to-go to place before returning to our one room hotel, my mother asked what had I done at the lesson and I had to confess I forgotten to go (because I was at our old house crying), my mother only said: how can anybody forget about music? 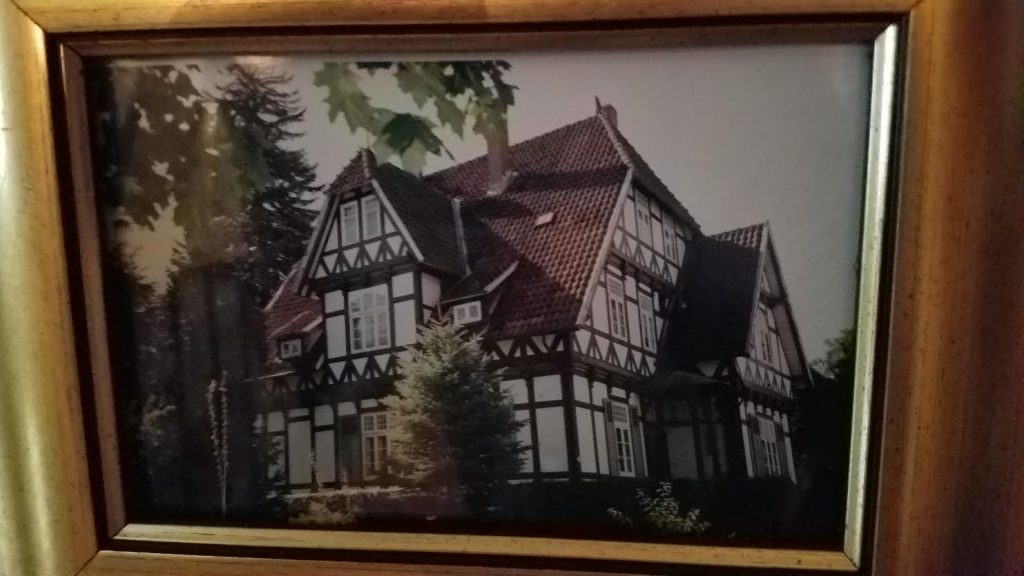 The house I grew up in: Wolfenbüttel, Lower Saxony, Germany

When did you come to the United States?

On August 18, 1959. I remember vividly getting off that big Pan Am propeller plane in Boston, stepping very slowly onto the tarmac (this is long before modern gadgets to deplane) and stepping onto a new continent.

What were your first impressions of Americans?

I had previously studied a semester at the University of Vienna, Austria, 2 semesters in what was then the Free University of West-Berlin, and a semester at the University of Freiburg, founded in 1457, where I met Dick Porter who was there on a Fulbright scholarship. When I arrived at Vanderbilt in the fall of 1959, I was admitted in the “division of unclassified studies” until all my records had been evaluated. I had been a summer exchange student from high school in the French speaking part of Switzerland and noticed the same ebullient, somewhat carefree spirit at Vanderbilt that I had noticed in Switzerland. In classes at Vanderbilt, I quickly noticed how many students were left-handed; that had not been permitted for me in grade school.

A more meaningful difference was the open display of patriotism. We attended all the football games with Dick’s old classmates and their wives. I was stunned at my first game as everybody around us rose for the National Anthem and began to sing unabashedly those stirring words. I had never sung the German anthem, although I deeply love the music of Haydn’s “Emperor” Quartet. At offices everywhere, Americans seemed to appear with confidence, an interesting change to what I was used to. The informality, calling people more than twice my age by their first names was a bit hard to adopt to quickly. Another difference at Vanderbilt was constant written in-class tests. In my earlier 5 semesters, I had not taken a single test in Austria or Germany.

This is a big and I guess loaded question, but I’ll just put it out there… what is your impression of life in America right now?

Of course, the big issue of today is the racial inequality, the economic and educational disparity, the deadly serious, moral problem of race that has grown over 400 years. I notice a profound change in understanding our history, in addressing racial questions and attitudes. The sixties brought sit-ins, demonstrations, riots, protests and the death of Martin Luther King and President Kennedy. We have just witnessed the horrific murder of George Floyd and the subsequent turmoil in many of our streets. Sixty years ago, the Civil War was still discussed at length by many, and I remember writing my parents that I was somewhat relieved that the Second World War seemed almost less relevant.

This is totally unthinkable in today’s world. We have books such Jon Meacham’s The Soul of America, Andrew Delbanco’s The War Before the War and Ta-Nehisi Coates Between the World and Me, books that present riveting, convincing and forceful evidence of what we need to face and do now.

I think I have changed, too. Superficially, I modified my strict, formal upbringing… the clearly remembered kind gesture of that American GI who waved to the frightened 8-year-old girl cowering in a corner when the Americans came into our house, liberating my old home town. He waved saying “good-bye” – and I noticed the pink inside of his hands. I had never seen a black person before. That GI knew how it felt to be afraid and outnumbered and I have never forgotten that lesson in humanity.

You’ve seen Nashville grow and change so much since you moved here. What do you think about the changes?

Where to begin. Maybe we’ll start with simple things, such as coffee houses. There was not one place to get a cup of afternoon coffee when I arrived. Now, you hardly see a corner without at least one Starbucks sign. When I came, so much of the architecture looked temporary; neon signs were left on during the day. Houses had lawns without fences. I so enjoyed any architectural detail, Old Central on the Vanderbilt campus, Second Avenue – and I was surprised that the potentially beautiful shoreline of the Cumberland River didn’t have pedestrian walkways and maybe a park. 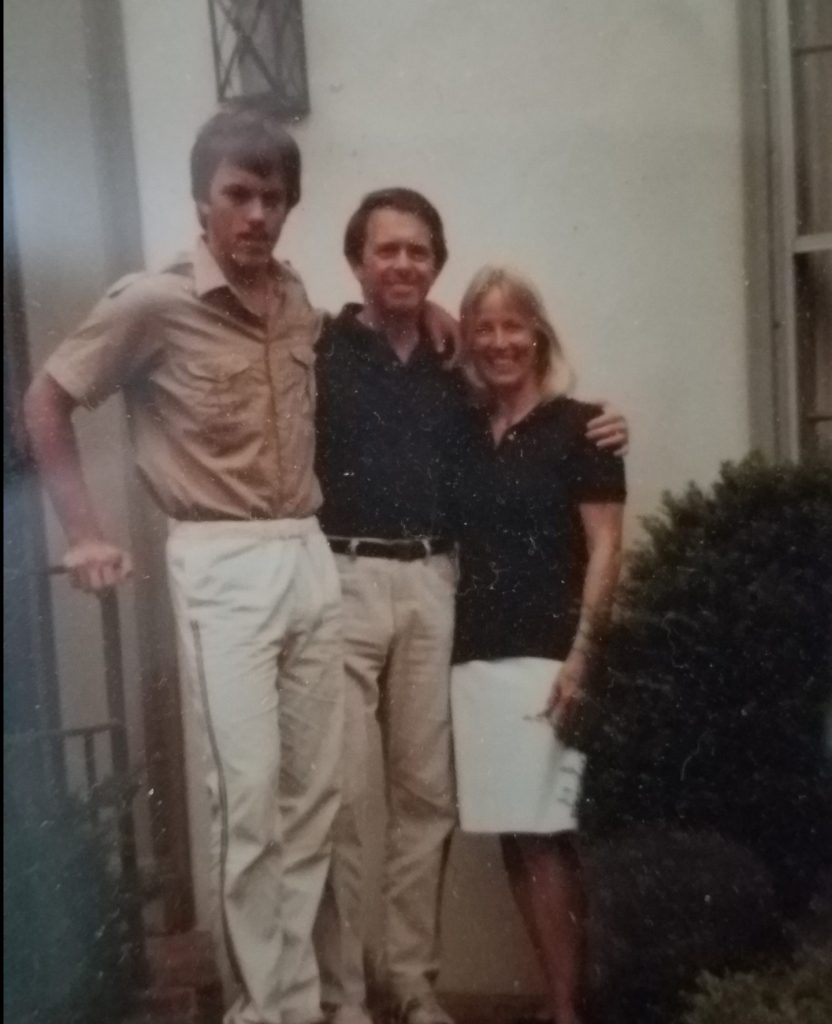 The three of us in front of our house in Gloucester Square, Nashville (1982)

The city has grown so very, very much but I grieve over every historic house to be demolished or any tree cut down anywhere. We need a link to the past – and to the natural world for many reasons – and old buildings, old trees are our heritage, we should not remove them without pertinent cause.

What gives you hope for our city? For our country?

I’ll answer the second question first: November may be our most important election so far! Hope for our city: I’m deeply worried about our financial situation in Nashville and wonder how we got to this point. But I am not qualified even to guess. I have confidence that our civic leadership will find the right answer to our pressing problems of housing, taxes, transportation, and hopefully many sidewalks to come!

What have you been reading in the last few months?

Two closely related, wonderful books: The Overstory by Richard Powers and a German book, brought back by a friend from Germany, and now translated into English: The Hidden Lives of Trees by Peter Wohlleben. 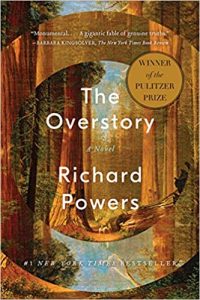 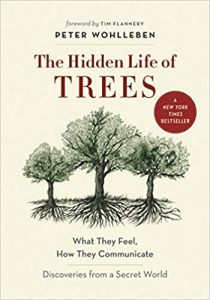 Maybe the most personal and memorable recent book: Margaret Renkl’s Late Migrations. Such a treasure of a book! 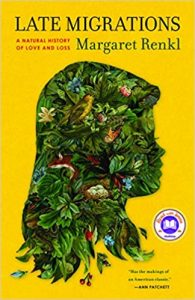 A gift from a friend: How to Catch a Mole by Marc Hamer. 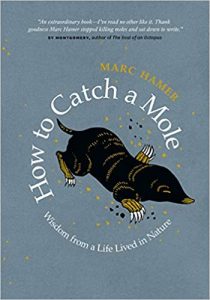 A very recent book I bought: Upstream by Mary Oliver. 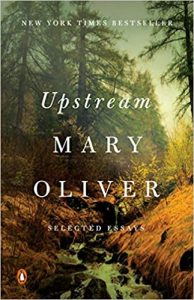 I had only read and enjoyed her poems, but these essays are brilliant! A book I return to read from time to time: Altogether Elsewhere: Writers on Exile, edited by Marc Robinson. 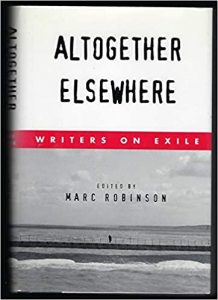 What are you watching on TV or listening to?

I really like to watch the evening news on Channel 8 with Judy Woodruff from 6-7pm, a thoughtful, balanced program. Other news channels I turn on regularly are CNN, MSNBC – and Fox News to hear other voices to keep me mindful and informed. I listen to WPLN all the time on all radios at home and in the car.

What are you most proud of about America?

Our Constitution – although we know that the most important sentence “that all men are created equal” is based on a compromise and that it needs to be put now finally into honest reality.

What are you most proud of about yourself?

I truly think of myself as a “work in progress” and hope to finish it in time… Well, I’m proud that I have not given up on that demanding, tough pursuit.

What’s your favorite time of day?

I have no definite answer. It depends on the day and season. When you are young, it is definitely morning with all the adventures waiting. Now, I appreciate evening for contemplating, for gratefulness.

Thank you, Brigitte, for sharing some remarkable stories from your life.

Thank you, John and Allison Beasley, for re-acquainting us. What a gift. xoxo