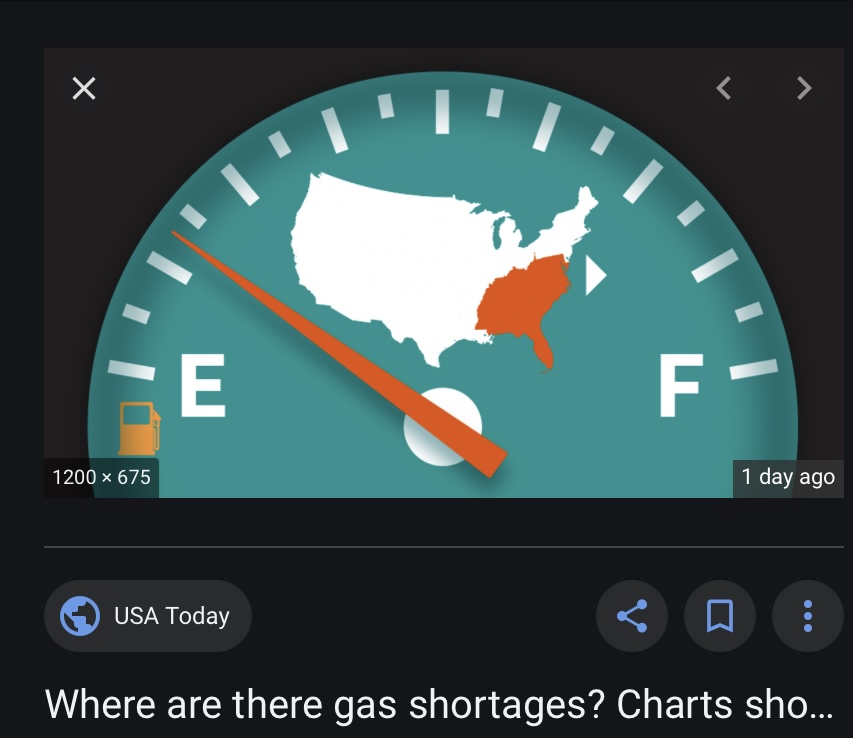 Sometimes I am really late to the party. Will someone please text me when there is important breaking news?

I didn’t realize until Wednesday afternoon that Colonial Gas supplied Nashville. When my younger daughter told me, we drove to the Green Hills Kroger and filled up (only regular gas available, and not at every pump). We were due to leave for Atlanta the next day for her older sister’s college graduation – attendance NOT optional!

It was fine. Everyone was civil. The lines weren’t too long.

I did have a moment of aggravation when the woman in front of me filled her car’s tank and then filled a paper grocery bag. She looked like she’d just come from a yoga class.

Jack Barnwell stops in at Bacon today with his reflections on hoarding, beach vacations, and curses…

Barnwell family visits to the beach seem cursed. During the last mother-daughter trip to the beach that Beth and Leigh took, a teenage driver making an illegal turn slammed into Leigh’s little Honda Civic, rendering it undriveable. I had to rush down to Ocean Isle to bring them home and arrange to have Leigh’s car towed back to Raleigh. In 2012 or so, Beth and I decided to have a quiet, intimate celebration of Thanksgiving at the beach. She found an ocean-front rental house on Hatteras Island, which is not densely populated. The house was advertised as “pet-friendly.” Unfortunately, the steps leading up to the house both from the driveway and the beach were so steep that our poor Belle, then about ten years old, could barely get up them. We got very little sleep in that cold, poorly insulated house with the wind howling all night. We bailed the next morning and made the long drive from the beach to the known and welcome refuge of our Lake Tillery house. One obvious lesson from the doomed Hatteras trip was to board our pets rather than take them with us.

Most of our beach trips have been to the southern Outer Banks, especially Ocean Isle. Last year we decided to go to a place on the northern Outer Banks, to Duck or Corrola, both of which are rather pricey locations. Beth’s internet searches tend to be more thorough  and successful than mine, and she found a condo in Duck that promised privacy, modern amenities, and a view of Currituck Sound. In  January or February of 2020, we made the required deposit. In March the Coronavirus hit with full force, and we cancelled, ending our hopes for a beach trip that year. In view of the raging pandemic, the owner of the condo kindly refunded our deposit.

This February, both of us fully vaccinated, we looked forward to travelling again after a year of self-imposed isolation. We rented the condo in Duck for the second week in May. We arrived there on Monday, the 10th, and were very pleased to find it exactly as advertised.  The place was extremely clean with modern furniture and a picture window in the living room giving us a lovely view of Currituck Sound: 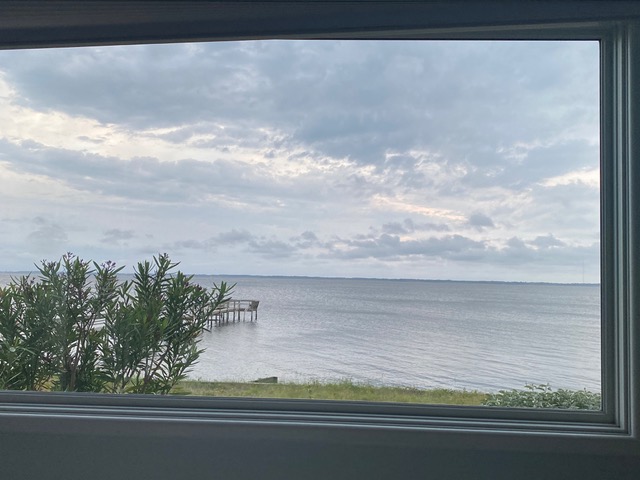 Looking forward to the days ahead, we dined on seafood and went to bed early. The next morning, we drove up Highway 12 past Corolla to the Outer Banks Center for Wildlife Education, a place I had read about in The North Carolina Birding Trail, Coastal Plain Trail Guide, a book Beth gave me for Christmas. 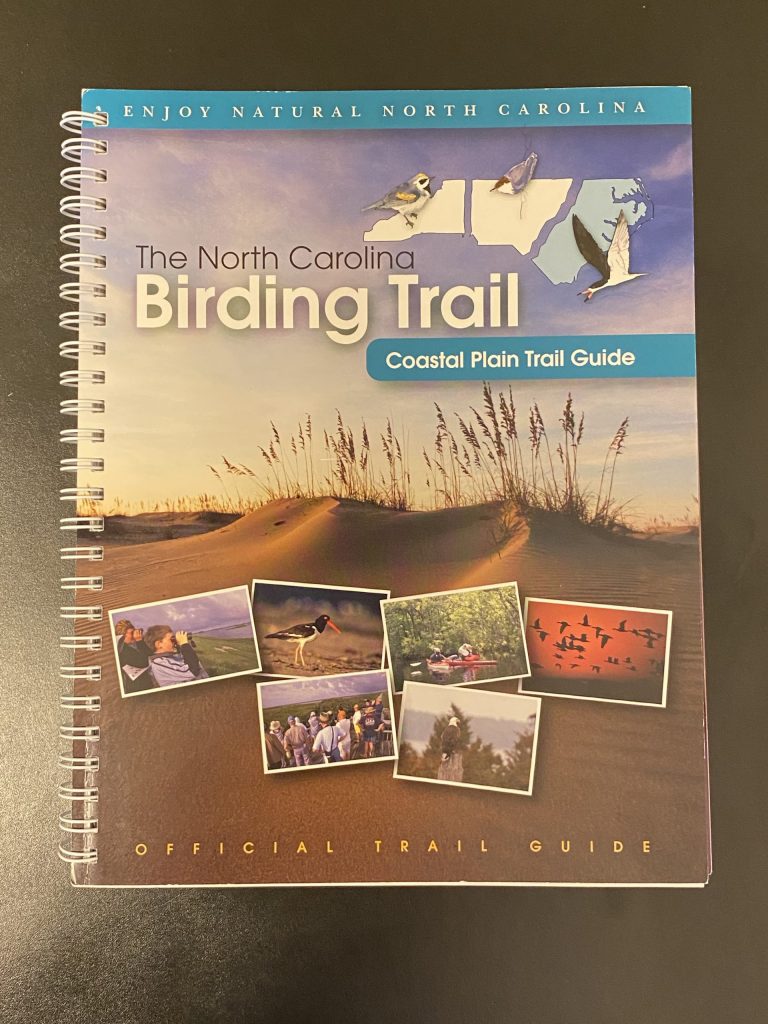 The boardwalk there is an ideal place to spot wading birds, and warblers and songbirds can be seen and heard in the surrounding maritime forest. A Great Egret, a.k.a. American Egret, was feeding as it waded in the sound: 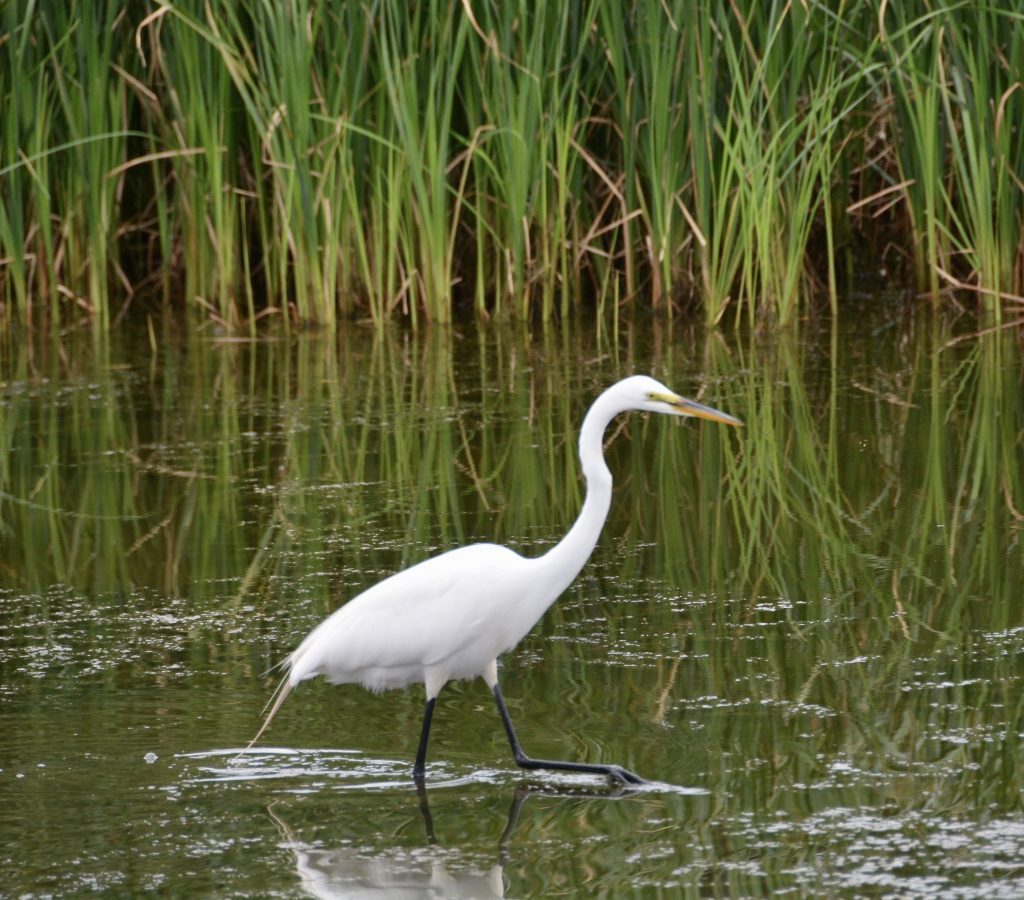 Adjacent to the Center for Wildlife Education is the Currituck Beach Lighthouse. Dating from 1875, the lighthouse is 162 feet tall, and the “First Order Fresnel Light” at its top can be seen from 18 nautical miles away as it rotates at 20-second intervals. 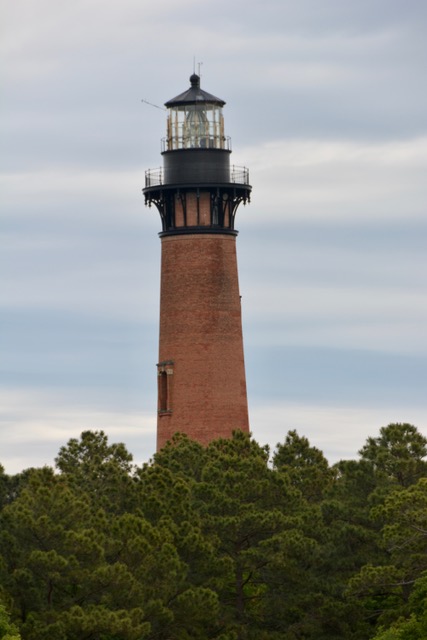 Beth and I were aware before we started our trip that the Colonial Pipeline carrying three million barrels of fuel per day from Texas up the East Coast to New York had been hacked and forced to suspend operations until the malware implanted its computer systems could be cleared. News reports indicated that because of gasoline already stored there would not be shortages at filling stations unless panic buying began. I was foolish enough to believe that consumers would heed that assessment and advice. How many times can I be wrong?

We had planned to go to Dismal Swamp State Park the next day to do some more birding and to hike along the trails there. But on our drive back from Corolla, we noticed that panic buying had depleted the pumps at all but one station along Highway 12. The line to get into that station stretched for blocks. We had taken Beth’s Honda Civic for the trip because it gets about forty miles per gallon on the highway. Nevertheless, with the gas remaining in its tank we did not have the range to make it back to Raleigh. When our week-long lease of the condo expired, we would not only be stranded but also without a place to stay. Our beach trip had to be abandoned. The question for the afternoon became this: do we search for gas along U.S. 158, the  four-lane highway running from Manteo northward through Nags Head, Kill Devil Hills, Kitty Hawk before it intersects with North Carolina Highway 12, or do we save what gas we have and hope to find a station tomorrow before we run out of gas on our drive back to Raleigh? We opted for the first choice. It was lucky we did. We found a station with a long line of cars stretching from it. After a wait of probably thirty minutes, we reached a pump. Blessedly, it still had fuel. Along the two hundred, fifteen mile trip home the next day, we saw exactly one station that appeared to have gas.

We should never invite friends to join us on a beach trip. We must have the curse of Jonah upon us, and I have no confidence that we would be saved from the belly of a whale. 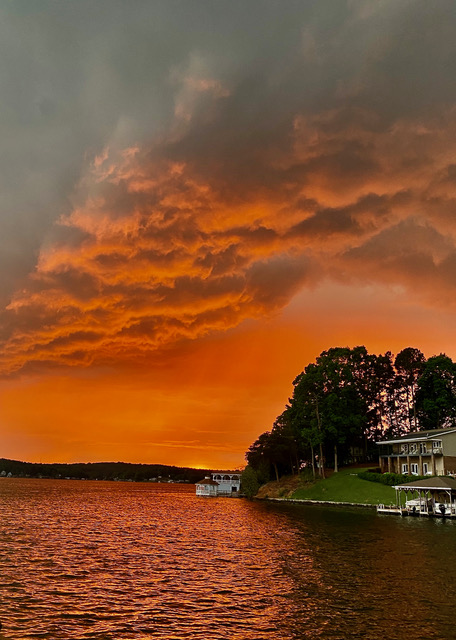 Sunset at Lake Tillery, May 2021 (all photos in post copyright Jack Barnwell)