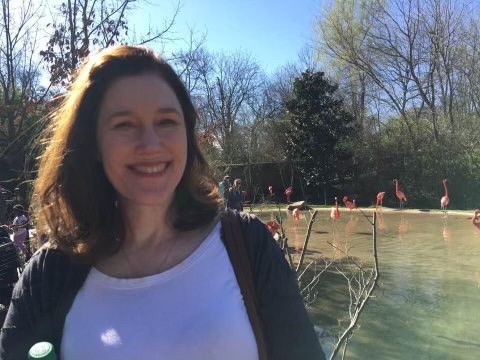 Some things seem so routine – the rhythm of the tides, traffic, me walking to my mother’s refrigerator every time I enter her kitchen. If I think about any of these things hard enough – with a critical eye and mind – I have to admit that there’s underlying chaos in it all.

The seaweed under the water and shifting sands prove it.

The constant aging of the pimento cheese (always Mrs. Grissom‘s) and the emergence of new things on the shelves (like Almond Milk) prove it.

Life does not remain stable and it is progressing in some direction, in all directions, all of the time. My two summer reading books detail different forces of nature that are both unstoppable but also not day to day “news.” I guess I should not be surprised that I can see this common theme in my reading during a time of reconfiguration of my family universe. One child has graduated from college and moved 500 miles away to start a career. The other is vigorously flying the nest to attend college at my alma mater, University of Georgia. No matter how I look at it, this is permanent change. The forces that put it all into motion started the day each child was born and not with the decision about which college to attend. In fact, the movements towards these outcomes were small, almost non-perceptible, and happening daily for the past two decades. So it is in life and with the solar system – the small events direct the larger ones. 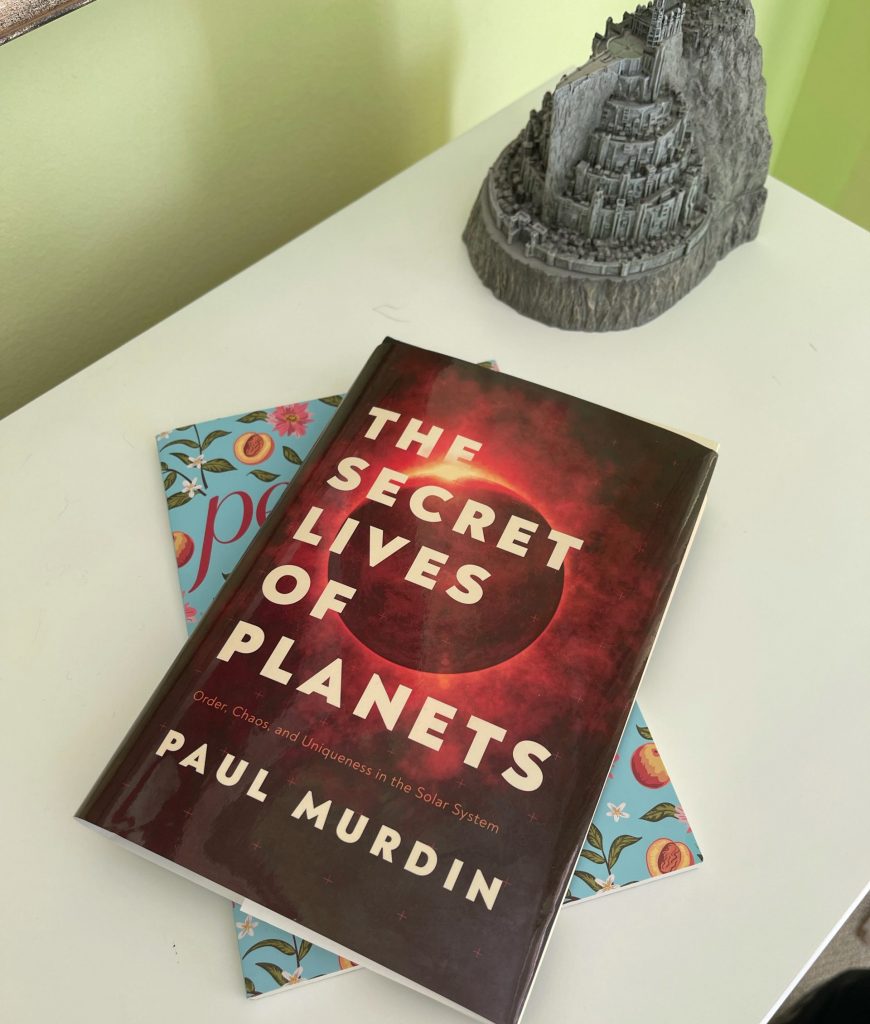 Paul Murdin in his book “The Secret Lives of Planets” describes in detail the forces of change in our solar system and how, because of the sheer number of variables, there’s no perfect science in predicting outcomes. Rather than just paying attention to the astronomical crescendos that make headlines, Murdin invites readers to learn the latest facts about the solar system, the planets and other elements in the Universe in order to gain a greater appreciation for astronomical elements and observations. Never condescending, Murdin is gifted at illustrating the magnitude of what scientists are undertaking when they talk about Mars travel or Moon colonization and the value of esoteric research projects that only enthusiasts pay attention to but which have set the stage for current studies and future discovery and exploration.

Take Murdin’s discussion of Venus as an example. Before Murdin’s book, I had no idea that the spacecraft Magellan, which mapped the surface of Venus for four years, was crafted on a budget from spare parts! It is also sobering to learn in the same chapter that Venus presents a case study of a runaway greenhouse effect which should inform how we view climate change on Earth. “The Secret Lives of Planets” is a wonderful overview of current Astronomy and, in some instances, such as the controversy around Pluto, a description of the winding journey to a current scientific conclusion. Murdin reminds us that Astronomy is a developing science despite its ties to antiquity and then successfully makes a case that, in a time when “it’s all about Mars,” it’s worth keeping up.

Murdin is Emeritus Professor at the Institute of Astronomy at the University of Cambridge, England. I can only imagine any class of his would be a fantastic experience, since he writes as I imagine he would talk to his grandchildren about his passion. For this reason, I took a long time to read this book, savoring each chapter with a cup of coffee. 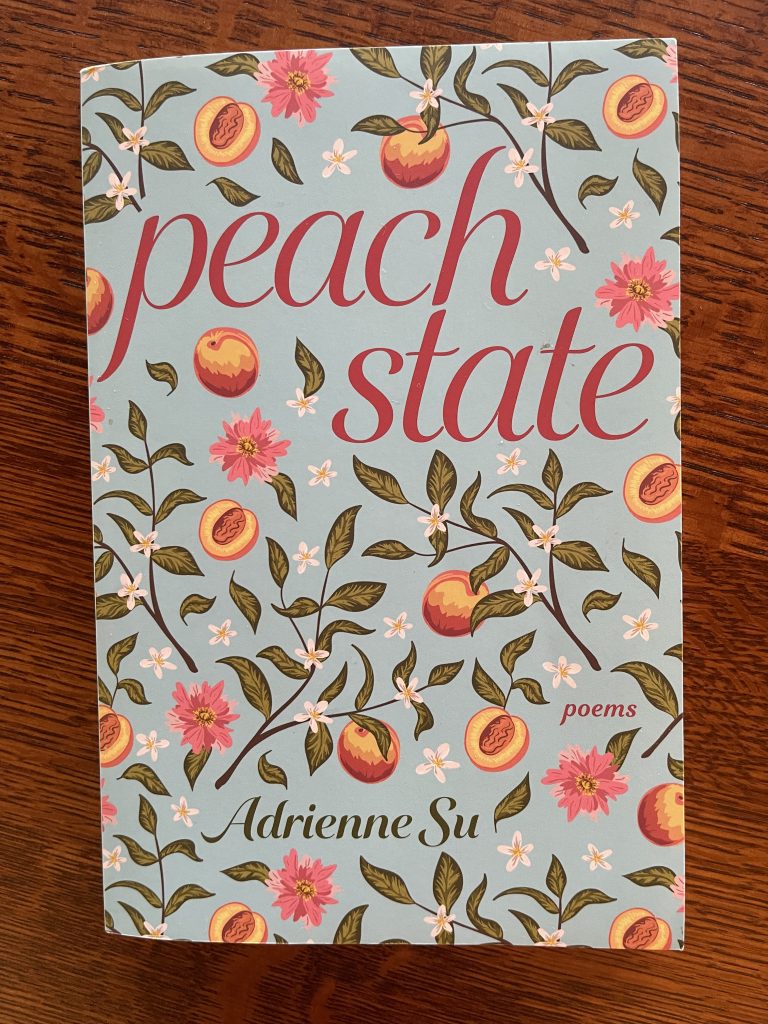 On any early morning, after reading a chapter of “Planets,” I might slice a peach from the Peach Truck into milk and enjoy a poem by one my favorite poets, Adrienne Su. Su’s new collection of poems “Peach State” brought me to happy tears more than once. How delightful to visit my own childhood memories of venison stew, Libby Land TV Dinners and berry bread alongside of Su’s exploration of her immigrant household of origin and the meals and culinary delights served by those in it to loved ones. Su tells a story of progress and growth using descriptions of meals, tastes and ingredients to illustrate what she left behind (and what we all leave behind) while surging forward into her own life. Su points out through her work that we are all choosing from our family history “buffet” what to take along our journey. Each choice has consequences that are impactful. Su does not judge the outcomes but asks the reader to think about their choices and the motivations behind them.

Not all the food Su writes about is from her family’s table. Her poem “Latin Club Always Had Pizza” points out universal truths for many of us attending public schools in the 1970s – opportunities were just ahead in our futures, if we could just play along for the present that we were satisfied with Pizza Hut as representative of Italy.

I have known the pull of choosing my own path and subsequently struggled with what that should look like in order to best honor my history and the sacrifices by those who came before me. For this reason, Su’s observations about moving north to study and pursue her dreams, in her poem “You’re From the South?” made me think even harder about the origins of my own independence (wondering if some of that could be hardwired into me):

In youth, I had no patience.
Both eyes on destinations,

I dismissed as insignificant
the view from under the immigrant

roof, its singular achievement
the blindness of its children

to narrow escapes, I began
my departure where thousands

make ultimate arrival, back when
security was mild. Why did I abandon

a sun-filled house? Such confidence
may have been my inheritance,

going away forever, from region
or nation, being family tradition.

Perhaps, as Su seems to suggest, family gives fortitude at the family table and not necessarily through the food served on it. This is an inheritance I hope to leave my own children as they go out to manage the life they choose to live – and the subsequent, inevitable chaos that will accompany it.

A few photos from Patricia… 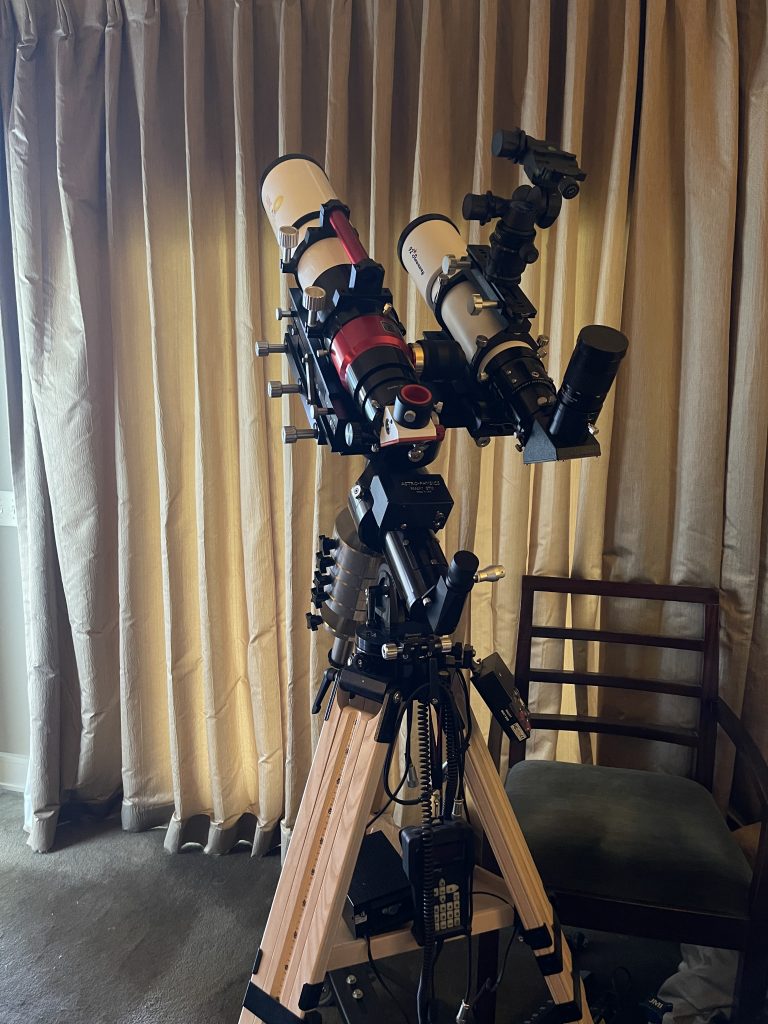 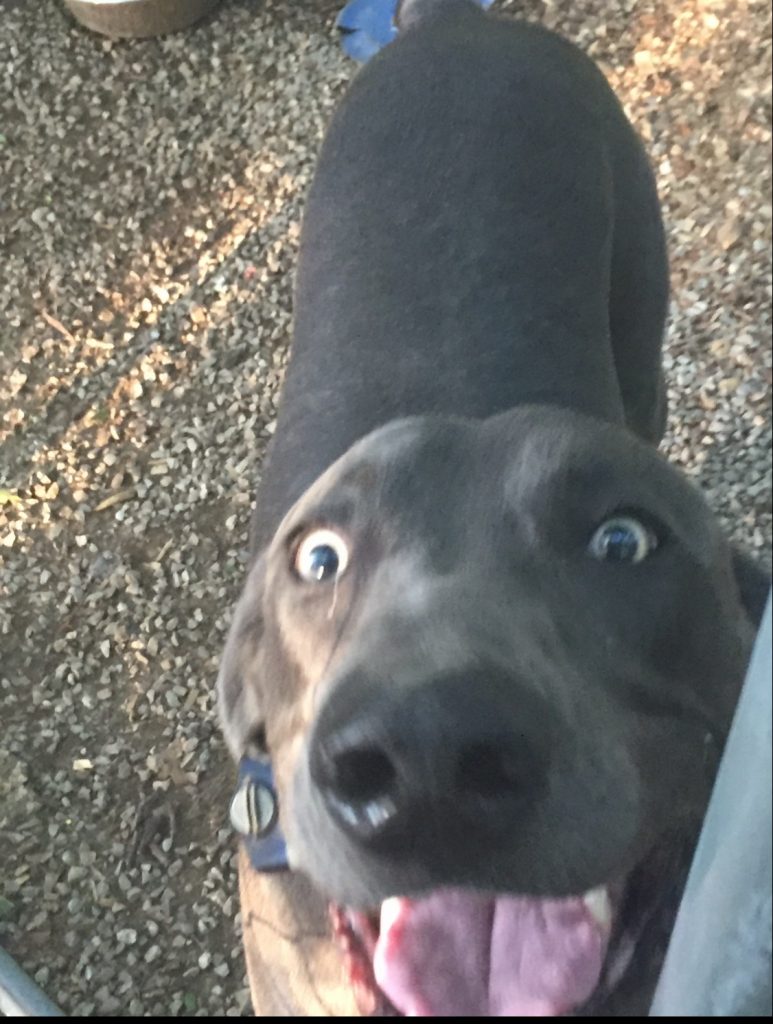 Our dog Pluto – the definition of chaos 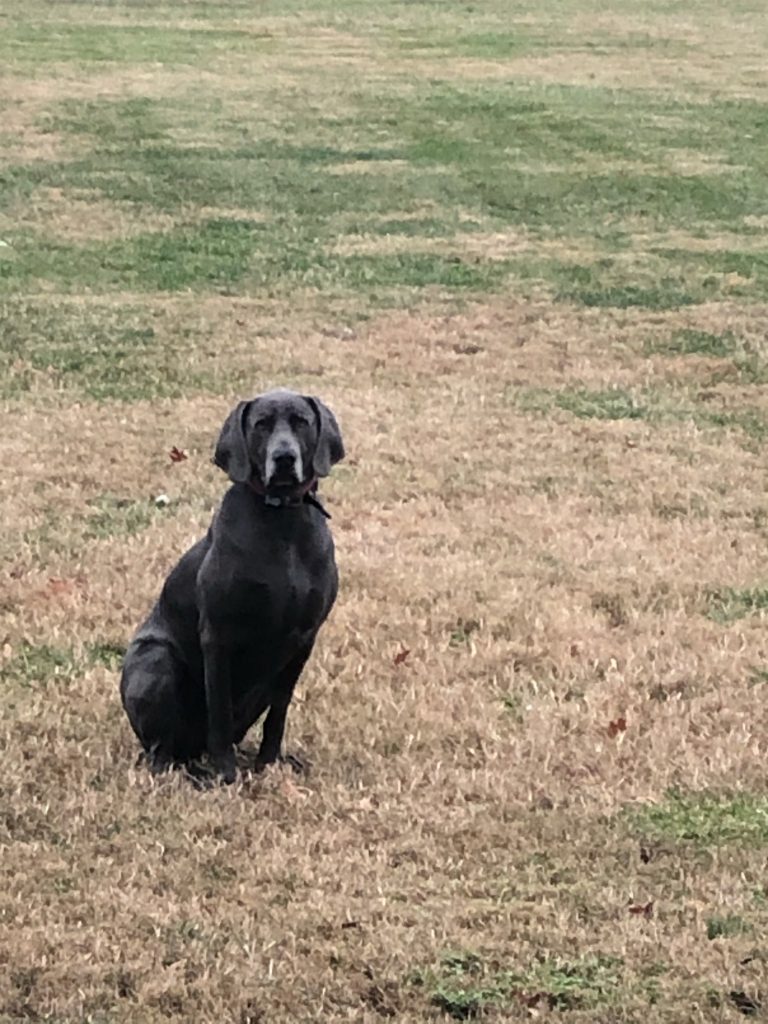 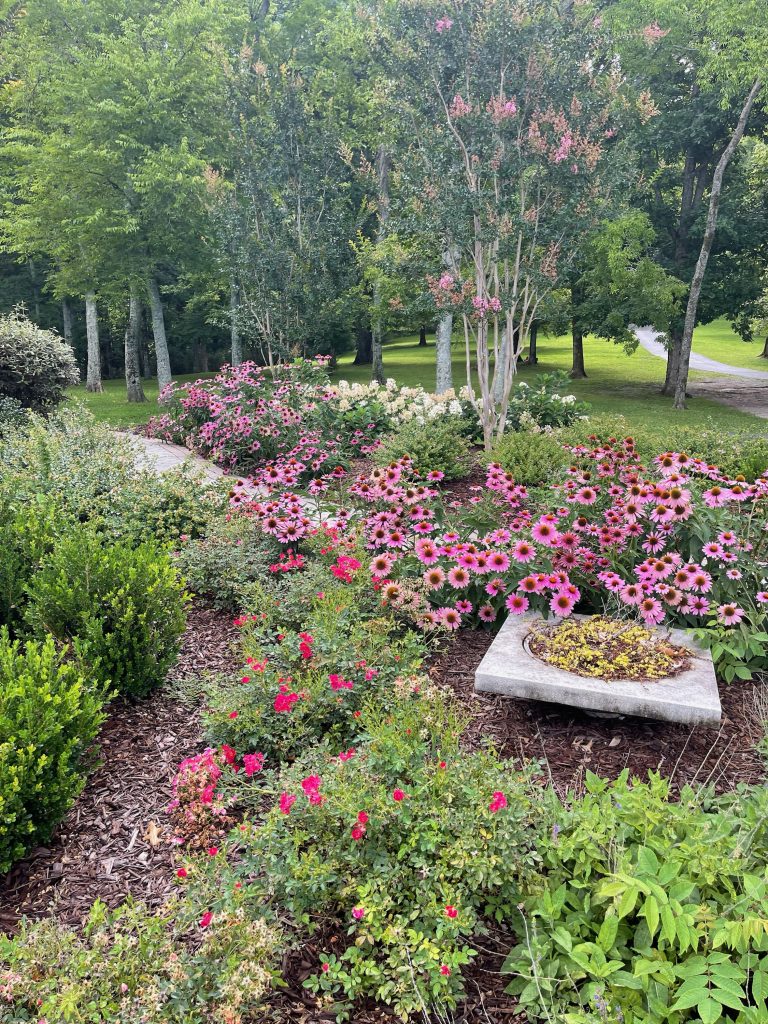 Happy August, Bacon friends! I’ll be back in September. Xoxo