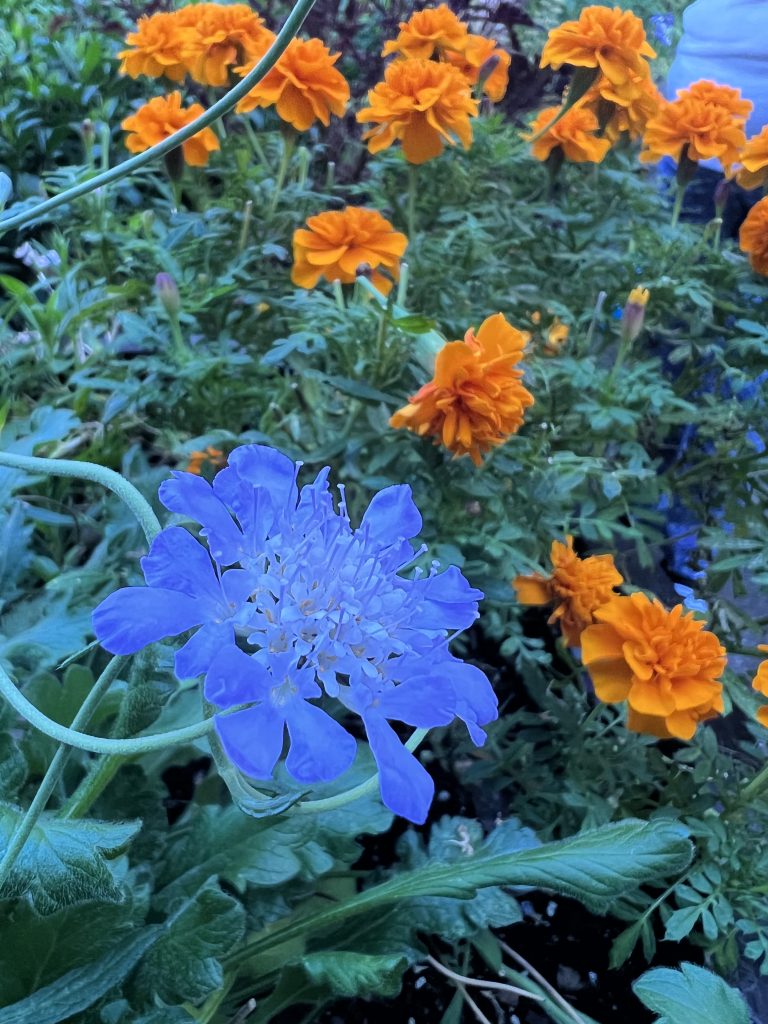 From my mother’s garden

As the days grow short and dark, novels beckon us into their bright worlds. Here are ten to consider for fall… 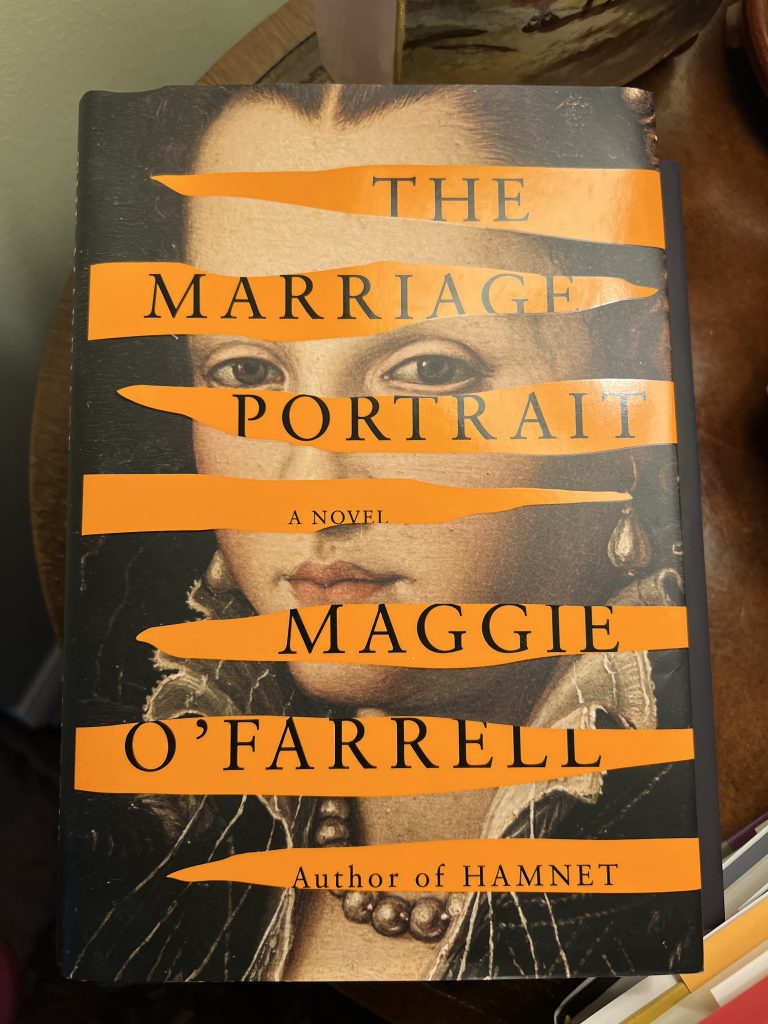 The Marriage Portrait, by Maggie O’Farrell, is a gleaming invitation to 16th century Italy, a world in which court intrigue can lead to both love and murder. As the novel opens, Lucrezia, the third daughter of the grand duke of Florence, has married Alfonso, the ruler of Ferrara. She is 15, he is 26, and they were not originally betrothed. Lucrezia’s beautiful older sister Maria had first been promised to Alfonso, but the more peculiar Lucrezia has been offered in her place following Maria’s death. The marriage begins well enough. The handsome Alfonso seems kind, if commanding, and the young duchess starts to find her place in his world. As his true character emerges, though, Lucrezia begins to believe that things may not end well for her. Time grows short, and choices must be made. Alone, far from home and allies, what inner resources can she summon? Maggie O’Farrell begins with much that is in the historical record – the marriage, the families – and from there imagines a heroine and a harrowing tale you won’t soon forget. If you only pick up one book this fall, I’d put this in your hands. 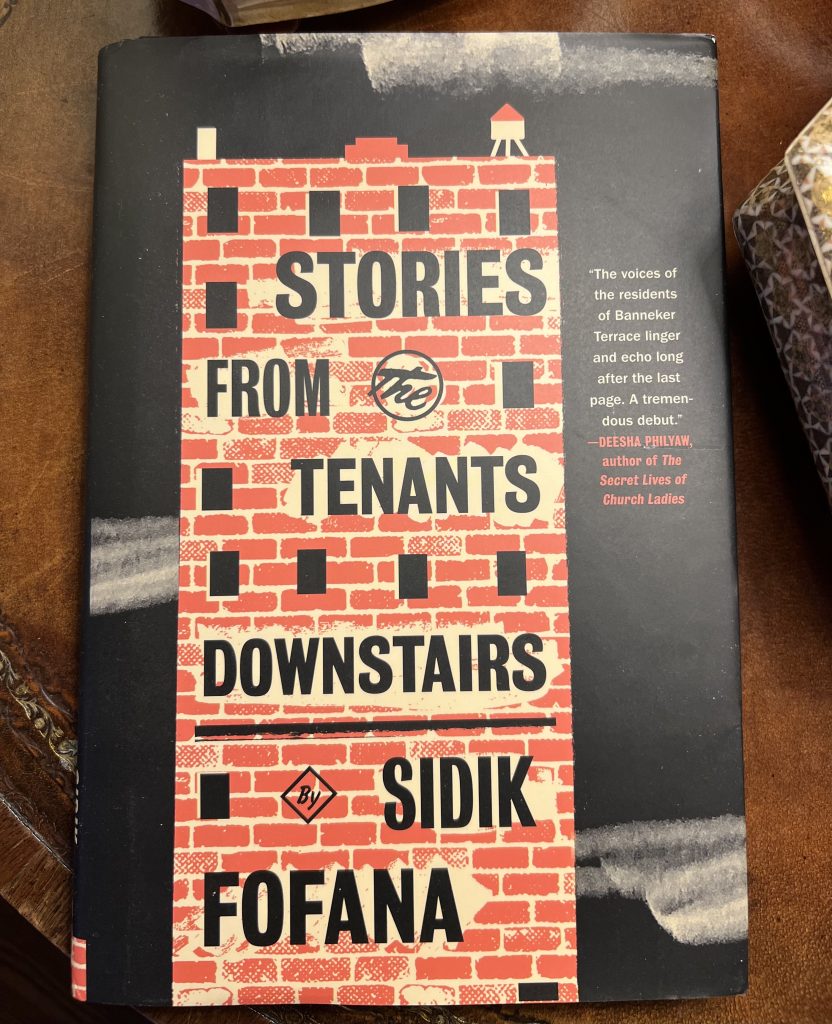 Another book that makes a strong impression is Stories From the Tenants Downstairs, by Sidik Fofana. The long-time and long-suffering tenants of the housing project at the center of these stories lead lives of trial and tribulation. We first meet Mimi, a waitress who earns extra money by doing hair out of her apartment. She knows she shouldn’t have bought the “Louis Vuitton bags, Jordans, leather booty pants. Open toed spaghetti-strap shoes you ain’t never wore and an Xbox you ain’t never played.” When the social worker questions the size of the TV on the wall, Mimi retorts, “I worked real hard and I can buy whatever I want. Anything else?” Mimi has ambition – and pride. Her son’s father, Swan, lives with his mother a few floors down, and while his Mom works two jobs to make ends meet, Swan and his friends rob the delivery guy. By the end of this collection, you’ve met a constellation of characters whose lives intersect, including the matronly queen bee of the apartment complex, organizing the tenants to protect their rights; a former scholarship gymnast who has probably missed her chance to move up and out; and her former best friend, in the process of losing her children to state custody. Their stories will stretch your heart as their voices stretch your vocabulary. The author, Sidik Fofana, earned an MFA from NYU and teaches in a public school in New York City. 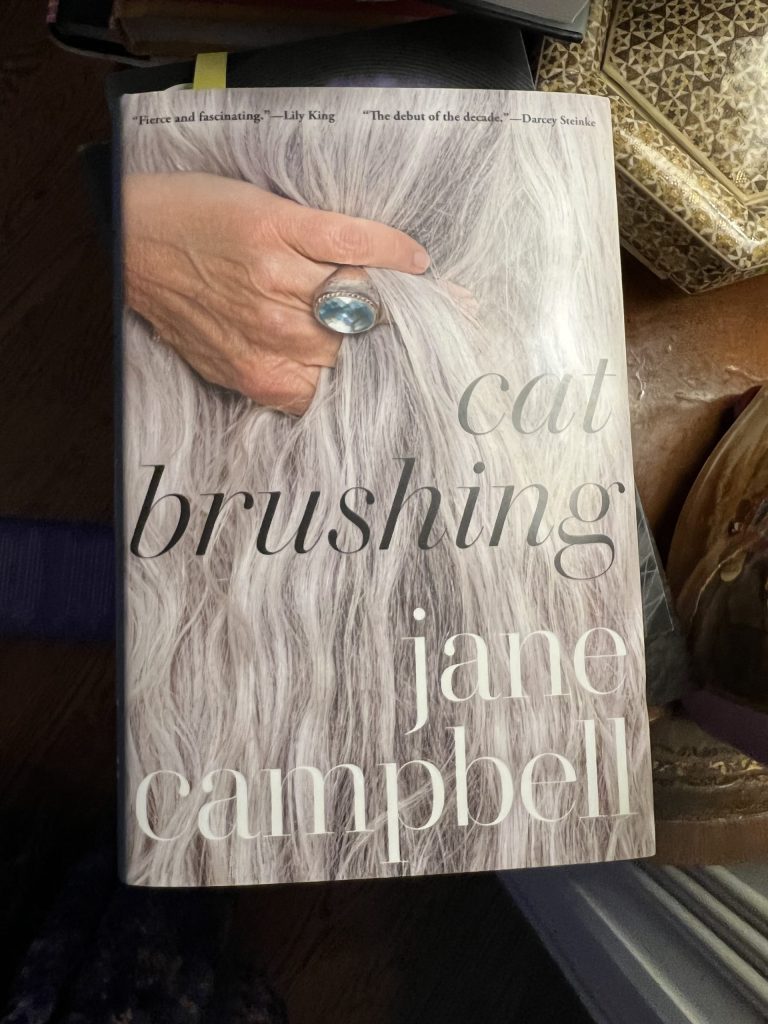 Fofana’s stories focus on a particular ecosystem of poverty. Jane Campbell, in her debut collection, explores the ecosystem of old age. (At age 80, she’s reporting from the trenches.) Each story in Cat Brushing – some of them quite short – inhabit the mind of an older woman. She may be in the hospital, quietly dying; she may be living, uncomfortably, with her son and his wife; she may be on holiday, stalking a former lover; she may be keeping the neighbor’s dog, all the while plotting the death of her neighbor’s husband. These stories begin quietly enough but often end in an arresting manner. Alongside the deprivations and indignities of old age exist the powers of desire, memory, and radical choice. “Cat Brushing is a fierce and fascinating debut. I loved these women who have taken off their gloves to fight life with their bare hands,” writes Lily King (Euphoria). 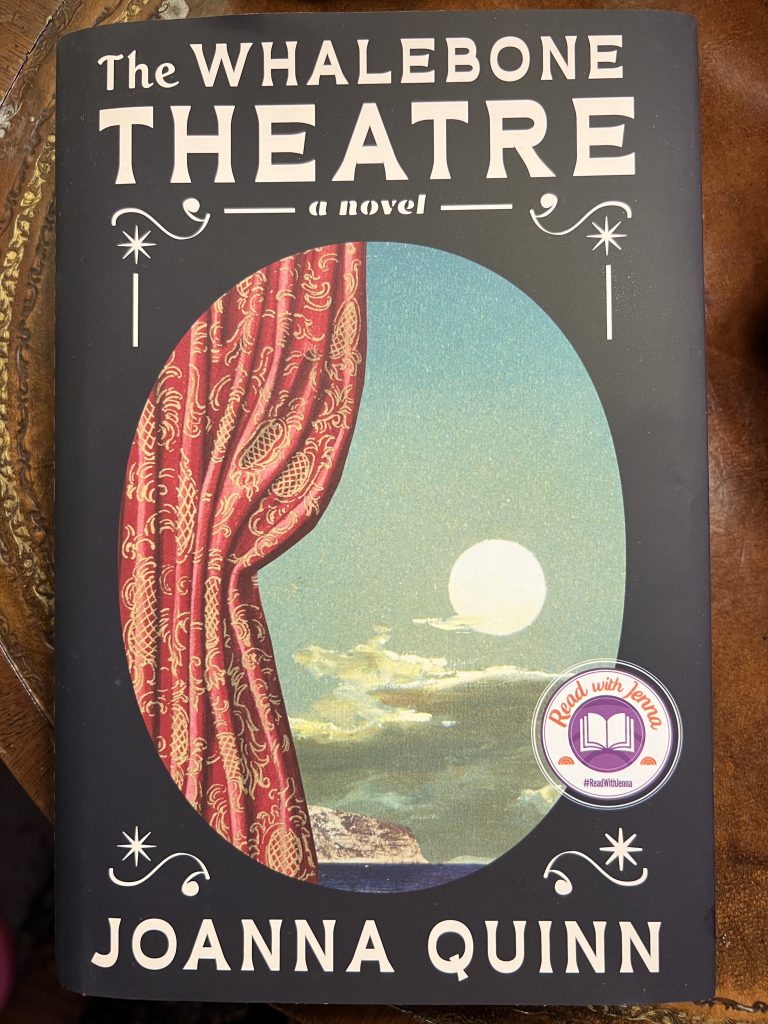 Another debut novel receiving kudos all around is Whalebone Theatre by Joanna Quinn, a Read with Jenna selection chosen in conjunction with Her Majesty The Queen Consort Camilla’s “The Reading Room”. Set in the England countryside between the wars, the book begins from the perspective of a young child – Christabel Seagrave – whose father has just remarried. Between her distant father and cool stepmother, Christabel’s real life is the one in her imagination, often dreamed up with the assorted cast of servants and other half-siblings who escape her parents’ attention. When a whale washes up on the shore, its bones become the perfect place to stage home-grown productions. The children play-acting among its bones will grow up to play much larger roles in the terrifying drama of World War II spycraft. “I found myself thinking about how we take our imagination as children with us,” says author Joanna Quinn. “Who we imagined we’re going to be versus who we end up being. Christabel’s journey is really a return to her own imagination and going back to the theater, which is kind of mirrored in my journey of writing a novel.” 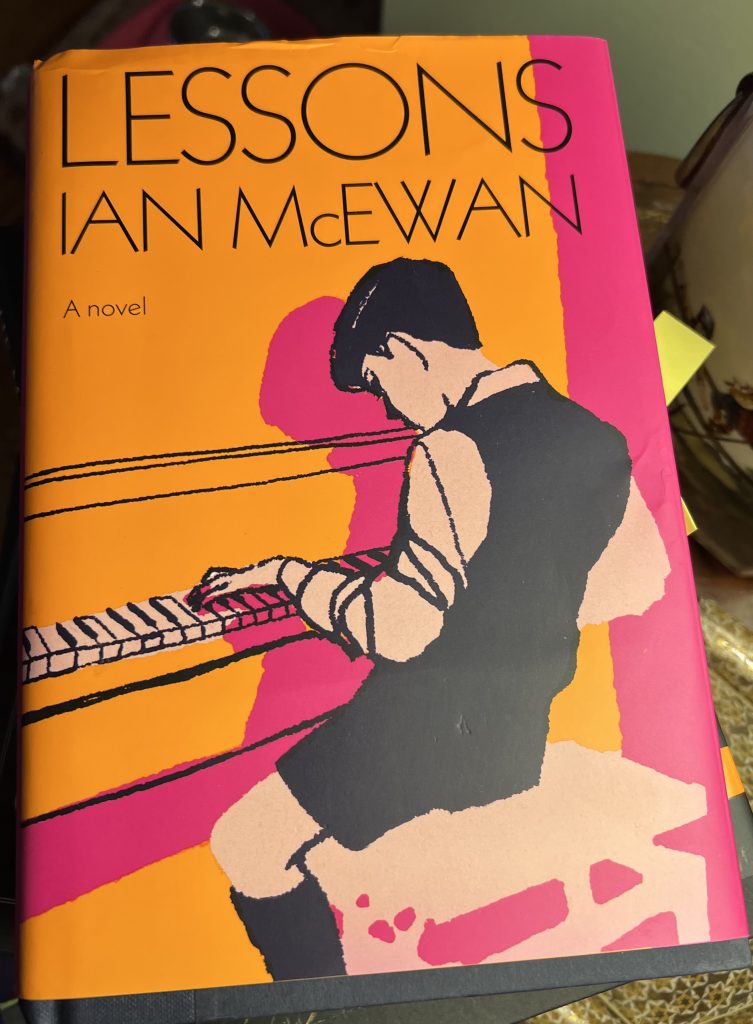 Ian McEwan’s latest novel Lessons, picks up – historically – where Quinn’s novel leaves off. It begins in England in the years immediately after World War II, when the protagonist is dropped off at boarding school and his parents return to his father’s military assignment in Libya. Roland’s piano teacher will become one of his earliest instructors in the mysteries and cruelties of life. His wife is another, abandoning him and their infant son to pursue her artistic calling. The novel follows the abandoned father (and abused student) for the rest of his life, asking – in the telling – about the ways a person might recover from grave harm; the ways global events shape a life; and the way one might dither and wander through life, yet still learn what needs to be learned – and find what needs to be found. Lessons is a book to immerse yourself in, a serious and seriously beautiful work. 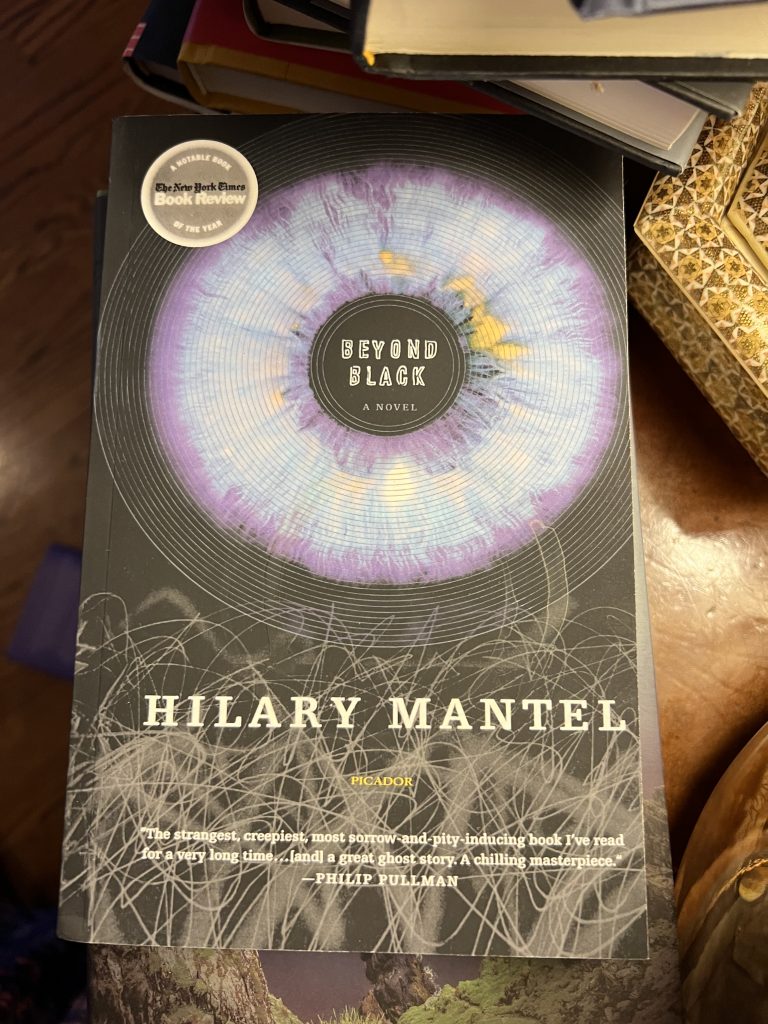 McEwan is widely recognized as one of the greatest English authors of our time. One of the other greats – Hilary Mantel (Wolf Hall trilogy) – passed away a few weeks ago. In honor of her passing – and of the season – you might want to pick up her novel Beyond Black, described by novelist Philip Pullman as “the strangest, creepiest, most sorrow-and-pity inducing book I’ve read for a very long time… [and] a great ghost story. A chilling masterpiece.” Amazon entices with its blurb: “Colette and Alison are unlikely cohorts: one a shy, drab beanpole of an assistant, the other a charismatic, corpulent psychic whose connection to the spiritual world torments her. When they meet at a fair, Alison invites Colette at once to join her on the road as her personal assistant and companion. Troubles spiral out of control when the pair moves to a suburban wasteland in what was once the English countryside. It is not long before the place beyond black threatens to uproot their lives forever.” “Funny and harrowing… A great comic novel. Hilary Mantel’s humor, like Flannery O’Connor’s, is so far beyond black it becomes a kind of light,” writes The New York Times. Beyond Black was nominated for the Orange Prize in 2005. 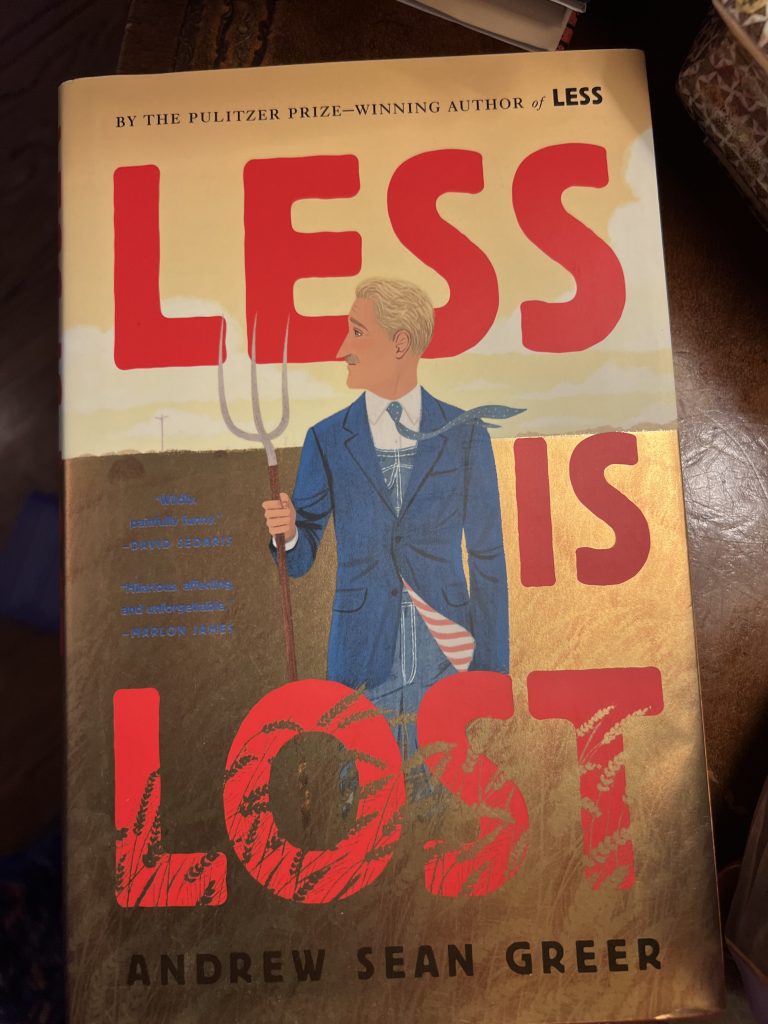 Funny novels don’t tend to receive the critical acclaim given more “serious” reads, but Andrew Sean Greer’s Pulitzer-Prize winner Less, published in 2018, is another welcome exception. In its sequel, Less is Lost, we follow the continuing adventures of Arthur Less, a minor gay novelist who tends to find himself in absurd circumstances while seeking love and money. In the first novel, Less couldn’t bear to attend the wedding of a former lover (or turning fifty), so he cooked up a plan to be abroad on the date of the wedding and his birthday. Global adventures ensued. In the sequel, Less finds himself in a dire financial situation requiring a madcap journey across America, from his California home through the “Mild Mild West”, to the South and finally his mid-Atlantic birthplace. I loved the original novel beyond measure and also agree with Kirkus Review that “[if] you loved the first one, you might love this, though it is a bit less fresh and a tad slow.” (It’s hard to be a sequel.) 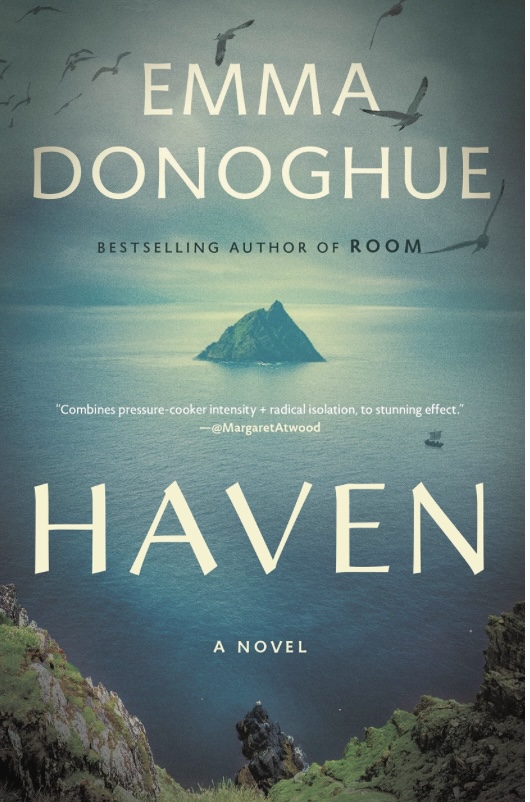 Another big publication for Fall 2022 – Haven, by Emma Donoghue – also moved slowly at the start. (From the author of Room, I had expected shimmering and terrifying suspense.) Haven has an intriguing premise: in 7th century Ireland, three monks set sail for an island that their leader has seen in a dream. One suspects from the earliest pages of this adventure tale and spiritual quest that they will find both more and less than they sought. “Told with the clarity of a fable, Haven transports us into territories unknown, where ‘fog makes an island of every man.’ Donoghue’s men of the cloth confront challenges that rattle not only their faith in God, but their faith in one another and in the natural world. This is a patient, thoughtful novel with much to say about spirituality, hope, and human failure, and about the miracle of mercy,” writes author Esi Edugyan. I put it down on page 79, but will pick it up again. 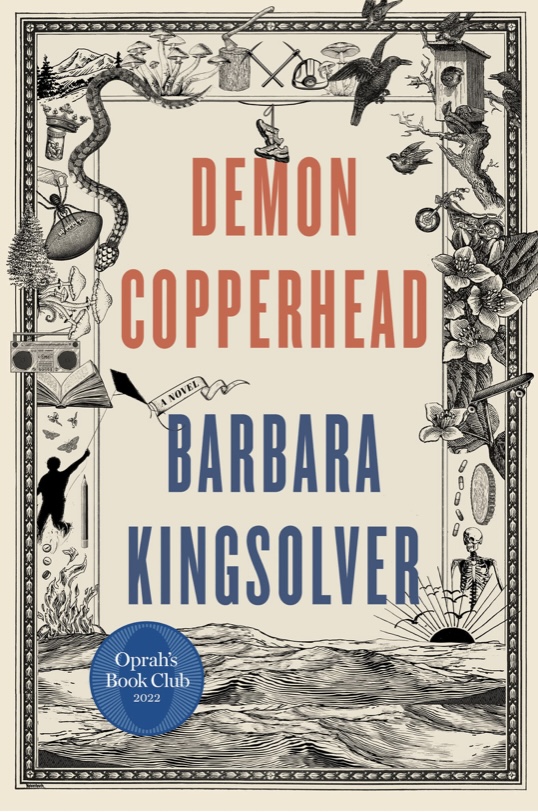 Barbara Kingsolver‘s brand new release, Demon Copperhead, is receiving early rave reviews. Set in rural Appalachia, it retells the tale of David Copperfield in the person of young “Demon Copperhead,” born to a single mother in a single-wide trailer. “Kingsolver’s account of the opioid epidemic and its impact on the social fabric of Appalachia is drawn to heartbreaking effect. This is a powerful story, both brilliant in its many social messages regarding foster care, child hunger, and rural struggles, and breathless in its delivery,” writes Publisher’s Weekly. Fans of Barbara Kingsolver will be elated to get their hands on her latest! 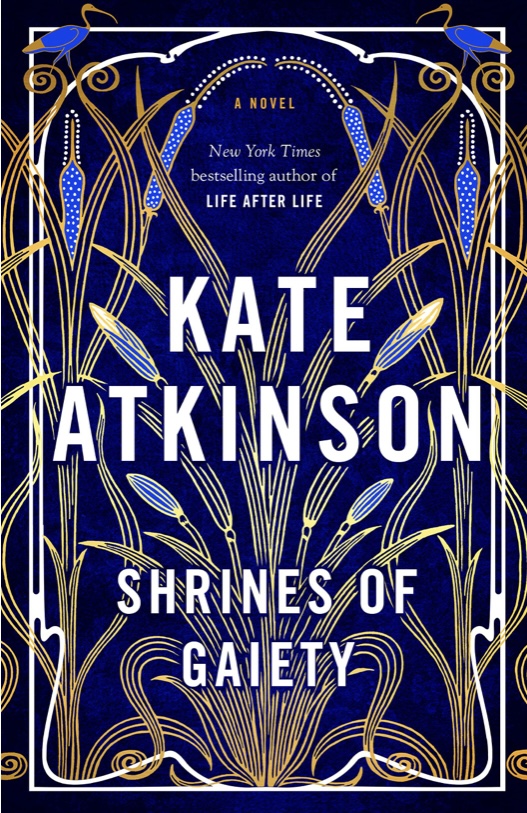 My hopes are especially high for Shrines of Gaiety, by Kate Atkinson (Life After Life). The Guardian describes it as “a heady brew of crime, romance and satire set amid the sordid glitz of London nightlife in the 1920s. It begins when the notorious club owner Nellie Coker has just ended a six-month jail term for a licensing breach at one of her legendary Soho venues – an embarrassing episode that leaves her asking if she’s really getting value for money from the backhanders she’s giving police. Worse still, there’s a new broom in town: upstanding DCI Frobisher, keener than his colleagues to investigate a flood of missing girls, among them 14-year-old runaway Freda, whose dreams of West End stardom run aground on the night-time economy’s thirst for flesh. Pungent with period detail sifted from contemporary accounts – the cocktails, the drugs, the clothes – Shrines of Gaiety sees Atkinson on her finest form since the chronological shenanigans of her Costa-winning sliding-doors saga Life After Life (2013).” 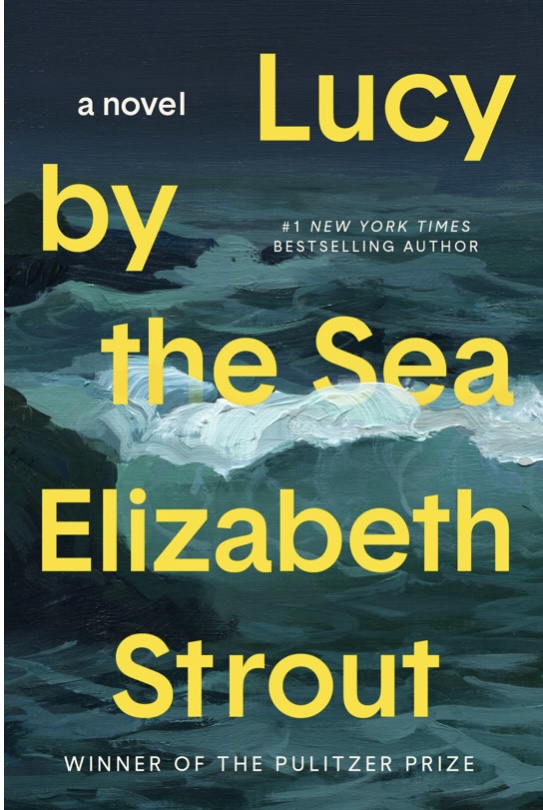 Bonus advice: You might take a pass on one of the big fall releases if you’re not quite ready for pandemic fiction. In Lucy by the Sea, Elizabeth Strout’s latest installment in her Lucy Barton series, our heroine and her former husband William have made their way to Maine, where they suffer through the early days of the pandemic together. Kirkus Review calls it a miss: “Fatigue and disorientation are natural responses to a cataclysmic upheaval like the coronavirus, but unfortunately, it’s Strout’s imagination that seems exhausted in this meandering tale… Not the kind of deep, resonant fiction we expect from the Pulitzer Prize–winning author of Olive Kitteridge.” I’m a huge fan of Elizabeth Strout, but don’t want to spend even one more minute in the psychological space of those early claustrophobic days. 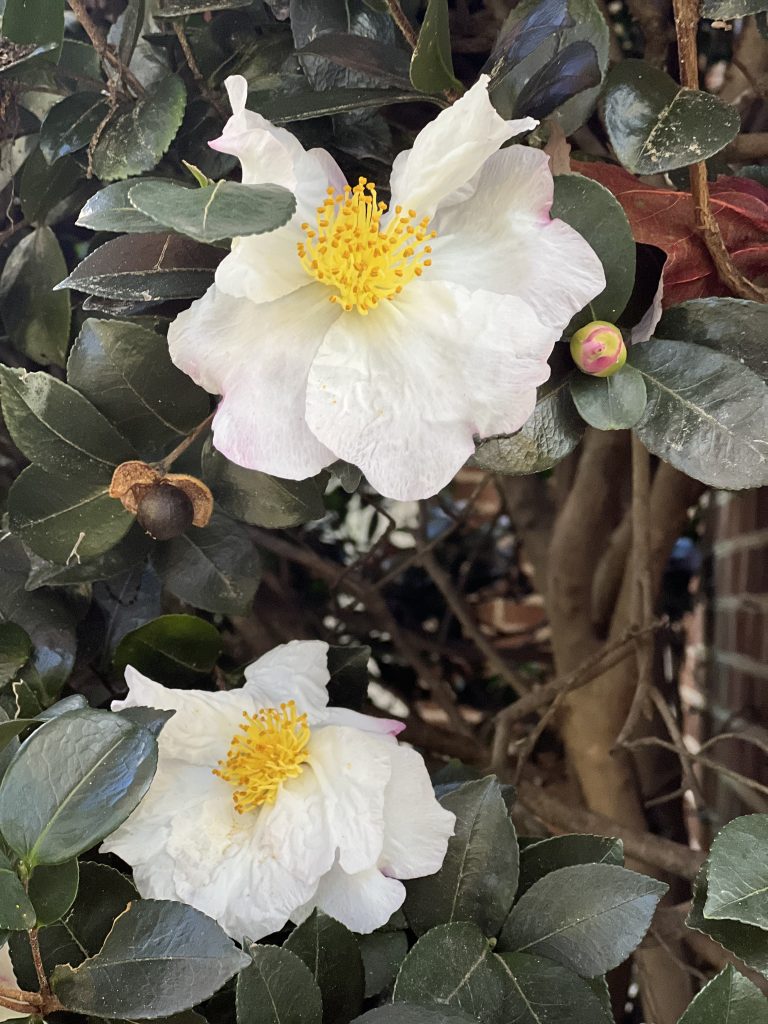 Best thing I’ve read this week? This post in The Marginalian on 16 lessons learned in 16 years. I hope you might love it too. Xoxo