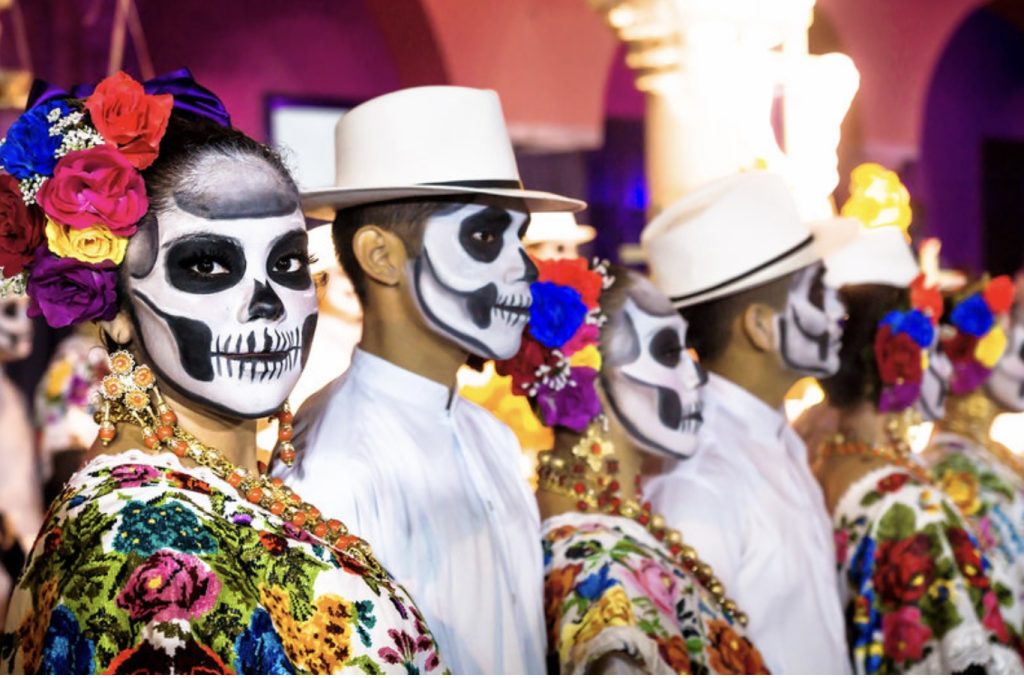 Halloween’s about candy these days. But maybe it’s still a little bit about ghosts and death and the meaning of life, too?

In her article “Living among the Dead in Manhattan,” Faith Bottum thinks about how we moderns banish death to the sidelines… but not entirely.

I hope you’ll enjoy an excerpt from her article, the photos of Manhattan cemeteries, and the link (at the end) to an extraordinary article on how to live…

”Halloween is a memento mori, a reminder of death. It’s also an occasion for neighbors to give candy to children and for college kids to dress up and drink. But the tradition started as the hallowed eve before All Saints’ and All Souls’ Days: the disturbing moment we remember that in the midst of life, we are in death.

And a good thing, too. A life lived among the dead is both thicker and deeper. “The communion between the living and the dead is an incredibly foundational principle,” explains Rabbi Mark Gottlieb, dean of the Tikvah Summer Institute at Yale University. “By insisting that the dead are a part of that community, we enlarge both our discourse and our sense of what truly matters.”

Even Manhattan hasn’t eliminated all of its cemeteries and old ghosts. Despite the late 19th- and early 20th-century efforts to banish graveyards in the name of public health and some vague sense of modern progress, at least nine graveyards can still be found on the island. 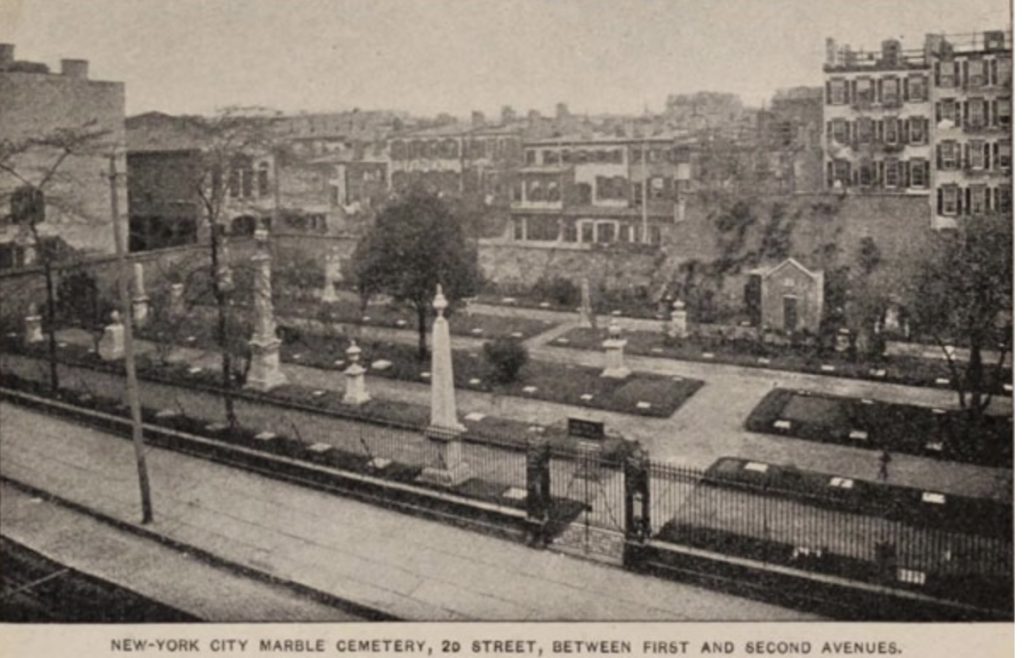 Among them in the New York City Marble Cemetery in the East Village, with monuments marking the underground vaults between tall ivy-covered trees. 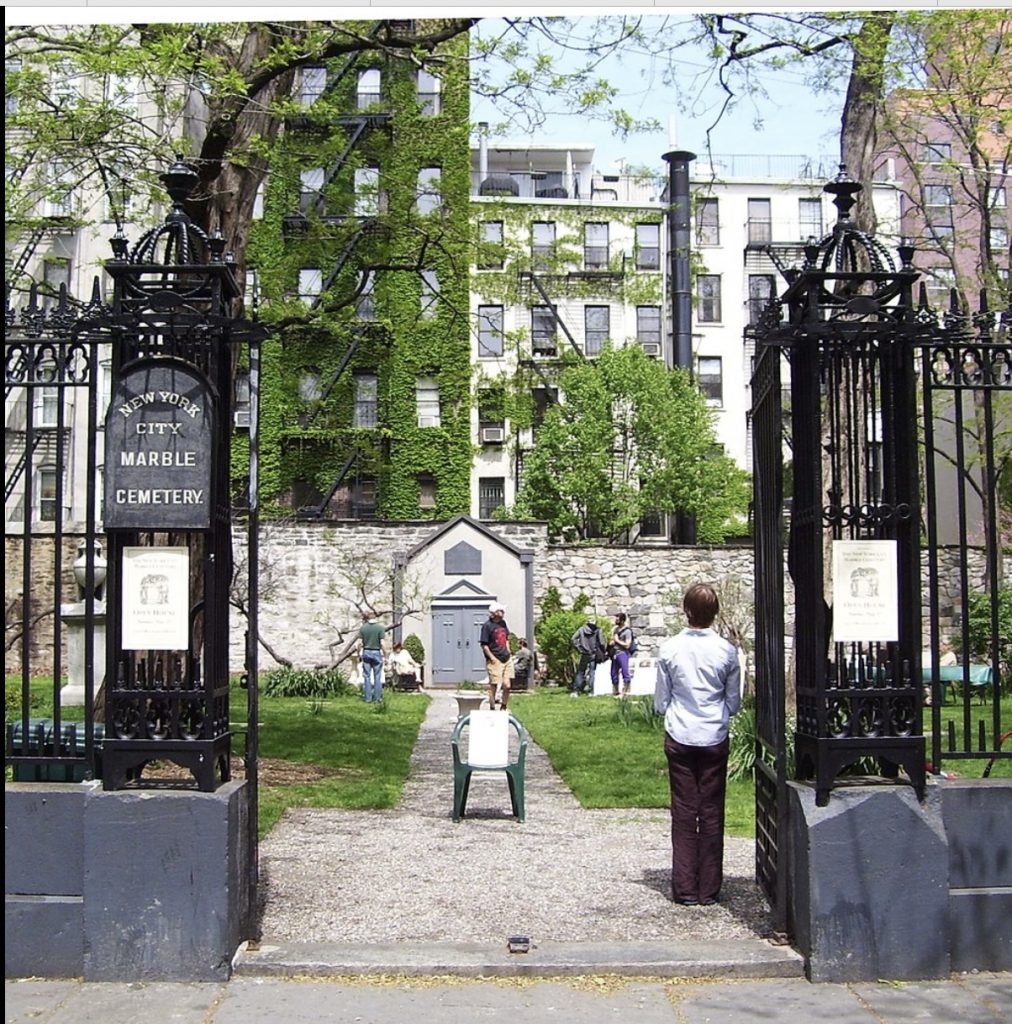 There’s also Old St. Patrick’s Cathedral, between Mott and Mulberry Streets, with its gray crypts wrapped in the protection of a red brick wall. 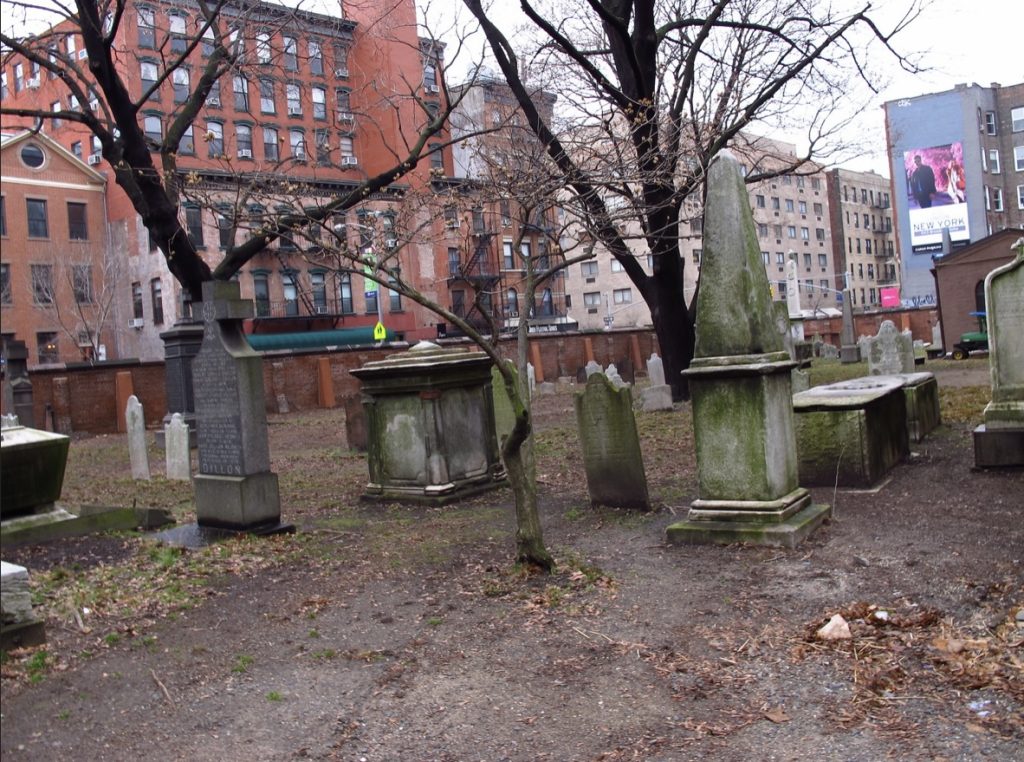 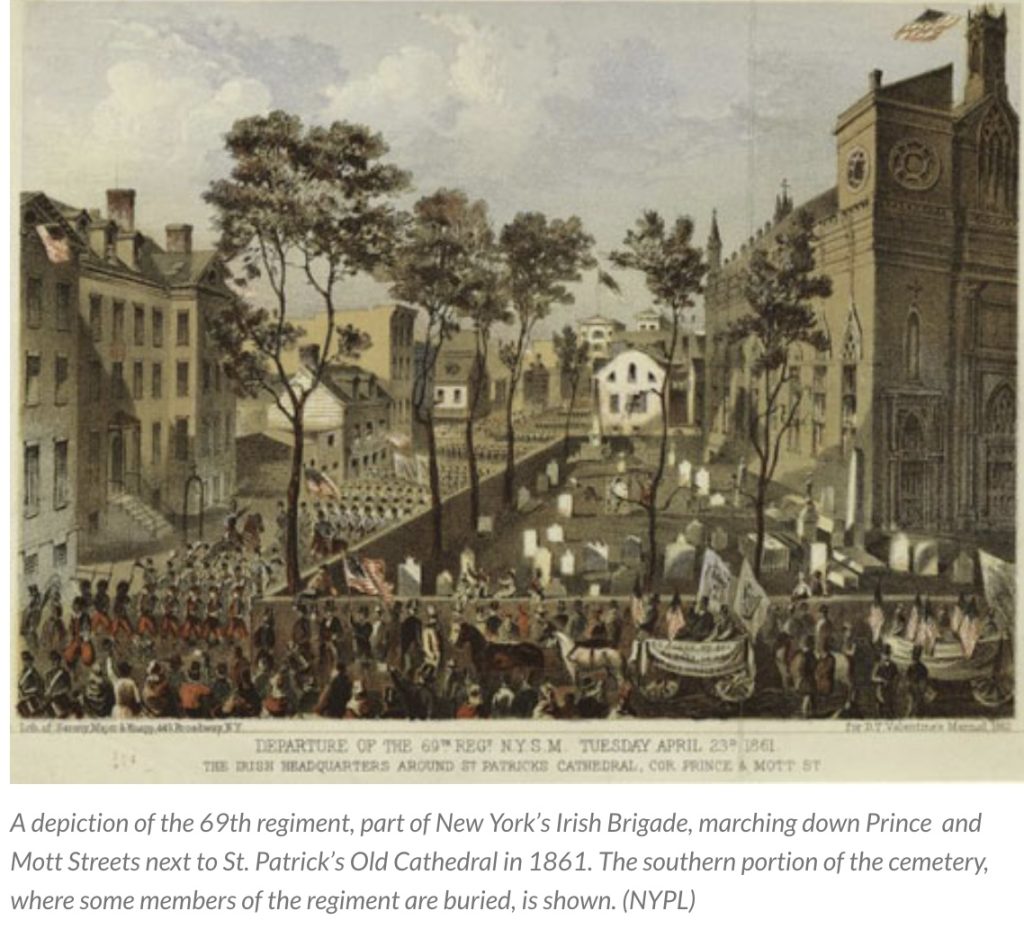 Perhaps the most beautiful is Trinity Church Cemetery, near Wall Street. Created in 1697, it’s where such figures as Alexander Hamilton and the steamboat inventor Robert Fulton are buried. Although hemmed in by the glassy skyscrapers of the financial district, the old marble, slate and granite headstones somehow fit the small space. A brick path drifts through the grass. “Sleep, Lovely Babe, and take thy rest,” reads the 1731 headstone of Nicholas Ellsworth, who died at age two, with a skull and two flowers carved above… 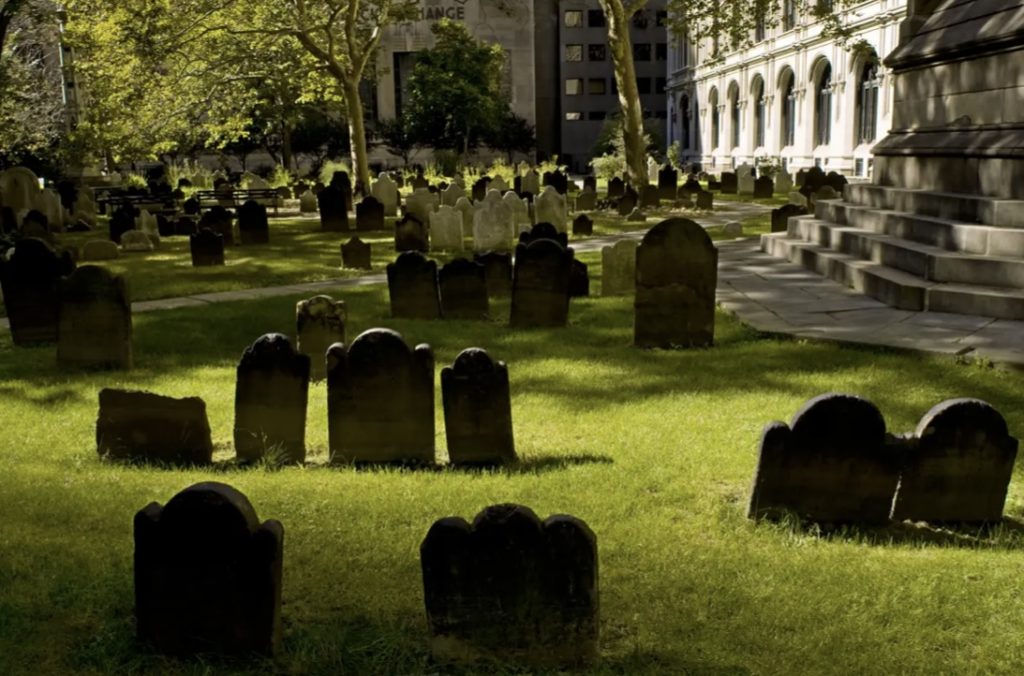 The ancient cities were built around the dead, the great scholar of Greek and Roman urban life, Fustel di Coulanges, argued in the 1860s. Attempting to turn their backs on earth, modern cities have thinned down the human experience to nothing more than the present. Each small appearance of the dead in a city, each ghostly intrusion of the departed into our busy lives, reminds us that a connection to the past thickens the present. Our lives are built on the contributions of those who came before us, the things they built and the promises they made, explains Pastor David Benke, a Lutheran leader in New York. We are bound, he says, “to the dreams and hopes of those who preceded us,” because they “connect us to a bigger story,… to what I would call perpetual care.”…

Halloween is a Christian adaptation of Celtic pagan harvest festivals, particularly Samhain, in which the celts would dress up in costumes to ward off ghosts. In the late Middle Ages, the October night was taken as the moment at which constrains on ghosts were weakest, before the holiness of the saints drove them back at dawn. Imported to America in the 19th century, Halloween became a kind of unserious harvest festival, mixed with elements of the Germans’ Walpurgis Night and the Mexicans’ Day of the Dead.

Among all the rest, Halloween can be a somber yet useful occasion. The quiet breaths of New York’s cemeteries serve as reminders of the past: murmurs that tell us we must die, and that the dead are still among us.”… 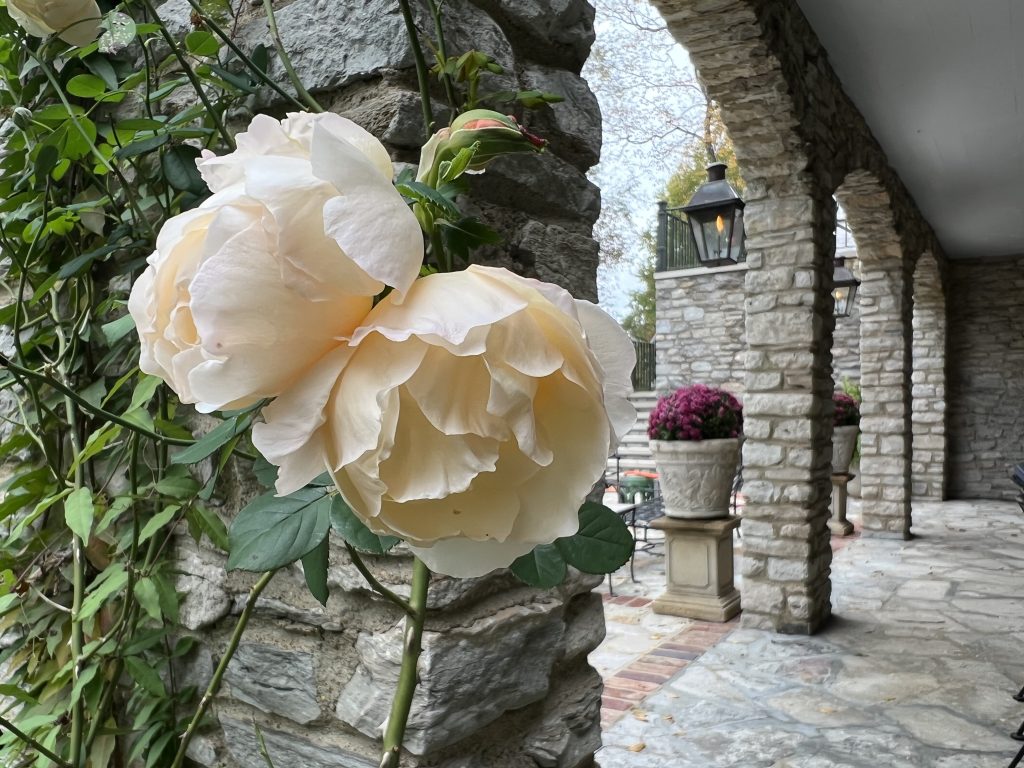 [Excerpts From Wall Street Journal, “Living Among the Dead in Manhattan”, by Faith Bottum, 10/27/22.]

Here’s the link I promised, an incredible article by Maria Popova, writing on the most important things she’s learned in 16 years of blogging at BrainPickings (now The Marginalian). Xoxo 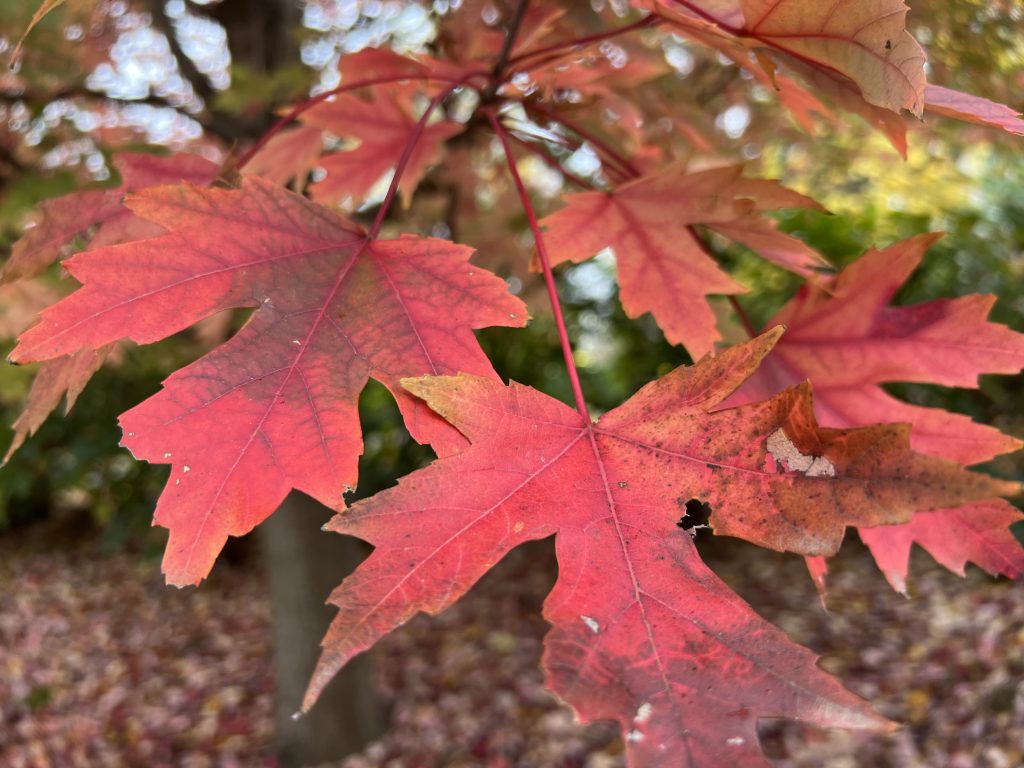 Day of the dead photo at top: from Loeskieboom/iStock.