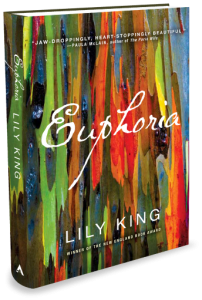 Lily King makes no grand claim that Euphoria explains Margaret Mead, though her bibliography suggests extensive research.  Reading it made me feel as if I could understand at least partially what it might have felt like to be Margaret Mead – among the tribes – with malaria and big ideas – and between two men.

“While this is a work of fiction,” writes King, “it was initially inspired by a moment described in Jane Howard’s 1984 biography Margaret Mead: A Life and my subsequent reading of anything I could locate about anthropologists Margaret Mead, Reo Fortune [her second husband], and Gregory Bateson [her third husband], and their few months together in 1933 on the Sepik River of what was then called the Territory of New Guinea.  I have borrrowed from the lives and experiences of these three people, but have told a different story.”

Euphoria opens with husband and wife team Schuyler Fenwick and Nell Stone leaving the violent Mumbanyo tribe they’ve been studying; from the first, the anger and tension between husband and wife is palpable.  Fen doesn’t want to leave, but Nell insists.  She has had more success than he with her first publication, and they’re studying on her stipend.  They plan to travel to Australia in search of a new tribe, but before they can leave New Guinea, they cross paths with another renowned anthropologist, Andy Bankson.  Bankson – desperately lonely, and deeply intrigued by both Nell and Fen – convinces them to stay on the same stretch of river with him, rather than hopping continents.  Later, as he and Nell develop a unifying theory of culture, Bankson thinks that “it felt like we were crawling around in each other’s brains” – an oddly powerful image of falling in love.  “The steam the book emits is as much intellectual as erotic,” wrote Emily Eakin in The New York Times Book Review – “a taut, witty, fiercely intelligent tale of competing egos and desires in a landscape of exotic menace – a love triangle in extremis.”  Euphoria delivers on its title.

Euphoria also reminds you of how terribly varied the human experience can be.  The Dobu tribe, for instance, is a yam-centered culture:

Because there was never enough food and they were often half starving, the Dobu had developed a great many superstitions around cultivation.  They also felt that the yams didn’t like playing, singing, laughing, or any form of happiness, but that having sex in the garden was essential for growth.  Wives were always blamed for the death of their spouse, and it was believed that women could leave their sleeping bodies and do deadly deeds, and as a result, women were deeply feared.  They were also deeply desired, and no woman without a chaperone was safe from male advances.  They were prudish and reluctant to discuss sex, but they had a lot of it and reported great satisfaction.  Mutual sexual satisfaction was important to the Dobu… One of their most important spells was the spell of invisibility, used primarily for thieving and adultery.

The Kiona are a wealthier and generally more relaxed tribe.  Xambun, a leader among his peers, has been enticed to work at a Western mine; when he returns to his village where the three anthropologists study, his people no longer understand him.  He eventually leaves: 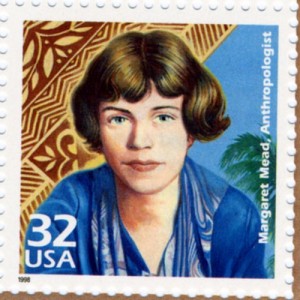 …[T]he general feeling was that it was a good thing he had gone.  His spirit has gone wandering, they said.  He had not returned with it.  He was once a man on fire and he came back a man of ash.  He is not the same man, they said, and he has gone to find his spirit and bring it back into his body.  They appealed to his ancestors, repeating their long names, and to the land and water spirits.  I [Nell] watched how fervently they prayed to all their gods for the return of Xambun’s soul to his body.

Though the “Kiona” and “Dobu” are King’s  inventions, she uses details from the real tribes Mead, Fortune, and Bateson studied at the time.  King’s artistic rendering of these tribes powerfully immerses you in something close to Mead’s world at the time.

Euphoria also brings to life the hardships, hard work, and temptations of anthropologists in Africa in the early 20th century.  Through Fen, we see the temptation to let go of Western inhibitions – and in the process, his sense of right and wrong.  Nell finds a different kind of ecstasy:  through deep knowledge of a culture.   At one point, she and Bankson are discussing why they do what they do:

She narrowed her grey eyes. ‘It’s that moment about two months in, when you think you’ve finally got a handle on the place.  Suddenly it feels within your grasp.  It’s a delusion – you’ve only been there eight weeks – and it’s followed by the complete despair of ever understanding anything.  But at that moment the place feels entirely yours.  It’s the briefest, purest euphoria.’

Euphoria received the New England Book Award for Fiction this year as well as a front page review in the The New York Times Book Review.  It has recently been named a finalist for the brand new Kirkus Prize, which at $50,000 makes it one of the most lucrative awards for a literary work.  The award winner will be announced on October 23d; I’ll keep you posted!