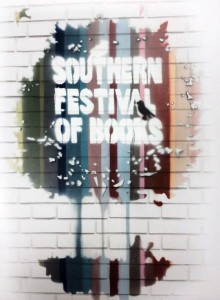 It’s nice to see a husband and wife team work together like peanut butter and jelly; cookies and milk; bacon and eggs!  Neil Krugman and Lee Pratt have rustled up a sell-out crowd for Authors in the Round tomorrow night, this year’s fundraising dinner for the Southern Festival of Books.  Today, they answer a few questions and share a few thoughts about what they’ve been reading lately.

What do you like to do on a rainy Saturday?
Lee: read
Neil: piddle around the house

What do you like to do on a sunny Saturday?
Lee: I like to be outdoors and walk the Greenway
Neil: Me too 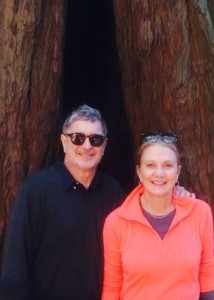 What’s your favorite book from childhood?
Lee: The Lion, the Witch and the Wardrobe, by C.S. Lewis
Neil: A Night to Remember, by Walter Lord

Did you ever read books you weren’t supposed to?
Lee: I don’t think I did, in the sense that there weren’t any books I wasn’t supposed to read
Neil: I was just on the phone with my mother for the Sunday night phone call, and asked her if she could remember.  Mom: “I don’t know, if you ever did, you never told me.”  Me: and I never will.

From Lee, sharing her thoughts on The Magicians Trilogy, by Lev Grossman: 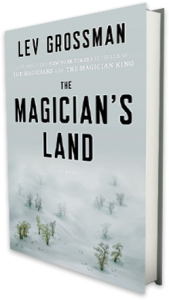 One of my favorite memories as a child is my mother sitting by my bedside in the evening reading stories to my sisters and me.  She read us all the Narnia books, the Oz books, The Arm of the Starfish, The Steps to Nowhere, The Princess and the Goblin, The Railway Children, the Mary Poppins books and many others.  We had shelves of them, collected from old book stores, garage sales, library sales.  Thus began my lifelong love of reading.  My favorite books and hers were the ones that took us to a magical place where time stood still in our world and amazing adventures were had in the pages.

I still love a good magical story – I waited with as much anticipation as any child for the next Harry Potter book to be released – but good ones written primarily for grownups seem to be few and far between.  A New York Times review of The Magician’s Land tipped me off to Lev Grossman’s Magicians trilogy.  It looked right up my alley, so I went straight to Parnassus, bought all three and flew through them all – The Magicians, The Magician King and the previously-mentioned The Magician’s Land.

In the first book, we meet seventeen-year-old Quentin, a brilliant but socially awkward teenager with a passion for a series of magical books called Fillory and Further novels and an unrequited crush on his best friend’s girl.  Through a series of strange events, Quentin wins acceptance to Brakebills, a prestigious magical university.  Thrilled to escape the mundanity of his adolescence, Quentin dedicates himself wholeheartedly to his magical education, which is more akin to learning engineering or physics than it is to our more recently-familiar wingardium leviosa.

Through the books, we follow Quentin as he grows up and makes his way through a world as intricate and fantastic as any dreamed up by C.S. Lewis or J.R.R. Tolkein.  Quentin initially believes that by excelling in his magical studies, he can banish his lingering unhappiness and seize control of his destiny.  However, the magical world is never truly separate from our own, and Quentin’s escape from himself is never complete, however much he wants it to be.

The characters in the trilogy are more complicated and sophisticated than the characters in the Narnia and Harry Potter books; they are on the verge of adulthood and wrestling with finding the purpose of their lives, relationships, dealing with alcohol and other typical collegiate experiences.  The academics here are rigorous, spells are very difficult and require genius mathematical skills, fluency in many languages (including dead ones), and hours and hours of practice.

The Magicians trilogy is truly a fairytale for grownups.  I think we all can relate to Quentin’s realization that he can’t magic himself into adulthood or into happiness with himself.  Like the beloved books of my youth, these will stay in my permanent library to be pulled out and reread, and shared with friends, children, and hopefully grandchildren one day. 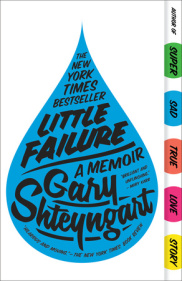 From Neil, sharing his thoughts on Little Failure: A Memoir, by Gary Shteyngart:

Gary Shteyngart’s writing is often delightfully negative and hilarious.  Let’s hope Mr. Shteyngart’s visit to Nashville for the Southern Festival of Books isn’t as mirth-inducing for him as his trip to the Indian literary festival on a decrepit Kuwait Airways flight that resulted in “Gary Shteyngart’s Misadventures in Air Travel,” a very funny piece he wrote for the July 2014 issue of Travel and Leisure Magazine: “The business class seats did not fully recline. My seat creaked a couple of degrees and then called it a night; meanwhile a flight attendant gracefully dropped what looked like the world’s largest date on my armrest.  This was not a good idea as it attracted the world’s largest fly, which would buzz around the cabin and swoop onto the armrest for the duration of the flight, hoping for more oversized treats.”

Shteyngart was born in Leningrad in 1972.  His parents were Jewish.  When he was 7, the family left Russia to begin a new life in just slightly less strange Queens, New York.  Little Failure is Shteyngart’s memoir of those beginnings, through adolescence and high school in New York, college at Oberlin, post-collegiate slacker days back in New York, to the cusp of a career as a successful writer.  The rite of passage takes him to such places as a college girlfriend’s house in Raleigh for his first southern Christmas, a Yugoslav-run motel in Florida for a fraught family trip to Disney World, long sessions on a psychoanalysis’s couch, and acting classes with Woody Allen’s second wife Louise Lasser (a/k/a Mary Hartman). “I decide to become a writer.  Who wouldn’t, under the circumstances.”

Shteyngart’s parents were born in the immediate aftermath of World War II and grew to adulthood in the days of Stalin, Khrushchev, and Yeltsin, none of which were a picnic for the Jews of Leningrad (or anyone).  Did the experience of growing up in the Great Depression and World War II leave your own parents or grandparents a little less carefree with a dollar, and life in general, than you and me?  Imagine that experience, but a thousand times worse, and some of Shteyngart’s parents’ eccentricities don’t seem so crazy.  He understands that, but a necessary part of anyone’s growth, and Shteyngart’s in particular, is escaping their parents’ emotional clutches and establishing some distance:

“John [an early editor and mentor] and I talk about our parents all the time, me only half listening, or quarter listening to his stories, him immersed in mine.  He points out what I sometimes can’t see through both my rage and my love (at a certain point, the two have become indistinguishable):  They paid for my college, they bought me my new teeth so that I could smile.  If his father, a successful businessman in Salem, Oregon, could worry about payment in a one-dollar parking lot, what can be said of my mother, a woman born in the year after the Siege of Leningrad was broken?  Empathy is the first part of this parental program.  And then a managed distance.”

Little Failure follows Shteyngart’s comic novels Super Sad True Love Story, Absurdistan and The Russian Debutante’s Handbook.  Many reviews of  Little Failure, and even some of the blurbs on the book jacket, describe it as “hilarious” – but hilarity was not the overall sensation left in me by the memoir, nor do I think that was the author’s intention:

“After finishing the book you hold in your hands [Little Failure], I went back and reread the three novels I’ve written, an exercise that left me shocked by the overlaps between fiction and reality.  I found on those pages, by how blithely I’ve used the facts of my own life, as if I’ve been having a fire sale all along – everything about me must go.  On so many occasions in my novels I have approached a certain truth only to turn away from it, only to point my finger and laugh at it and scurry back to safety.  In this book I promised myself I would not point the finger, my laughter would be intermittent.  There would be no safety.”

I think Mr. Shteyngart succeeded at that as well; laughter does not ring from every sentence.  But while the laughter may be intermittent (actually it’s much more than intermittent), the in-between is filled with interesting detail, insight, sadness, even warmth and heart, drug and alcohol ingestion, awkward youthful sex and sexual longing, and excellent writing.  The book is 300+ pages, but reads quickly.  There is some meat on the bones, but no schmaltz. “There are more memories here I would like to capture and display for you, if only I were faster with my net,” he, not hilariously, but beautifully, writes.

In between chapters of Little Failure, I caught up on final installments of Ken Burns’ documentary The Roosevelts, on Channel 8.  A particular thrill for us, and others in Nashville too, no doubt, was the presence and contributions of historians David McCullough, Doris Kearns Goodwin and Jon Meacham.  McCullough and Goodwin have visited our city as Nashville Public Library Foundation Literary Award recipients and speakers.  Jon Meacham has been a big supporter of this event, and Keith Meacham is chairing this year’s Gala along with Corinne Kidd.  The 2014 Literary Award recipient is Scott Turow.  The Gala is November 8, the Patron’s Party the night before.  There are great activities throughout the weekend.  Attend everything you can!