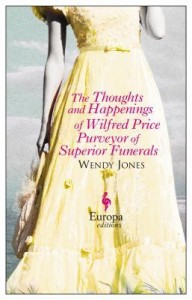 Downton Abbey’s 5th season premieres in the U.S. ages from now, on January 5th, though it’s been airing in Britain since September.  This isn’t (perhaps) Revolutionary War material, but it is certainly aggravating!  If you need something to tide you over, check out The Thoughts and Happenings of Wilfred Price, Purveyor of Superior Funerals, a delightful comedy of manners set in the Welsh countryside between the wars.  The action doesn’t take place upstairs or downstairs on an estate, but in between – among the ranks of the merchant class – with an undertaker hero.  I love it for everything it is and is not:  a perfectly delicious light read that has both substance and wit but no heaviness of spirit or language.  Thank you, Quail Ridge Books in my hometown of Raleigh, North Carolina, for highlighting this gem of a novel by Wendy Jones.

The Thoughts and Happenings of Wilfred Price, Purveyor of Superior Funerals introduces you straightaway to Wilfred – a solid and hardworking young man, proud of a well-prepared corpse.  His world is a small one – the village of Narbeth, in Wales – and the year is 1924.  At a picnic one day, he is overcome by the momentary beauty of a childhood acquaintance in a yellow dress and proposes marriage on the spot.  She happily accepts.  Within an hour, Wilfred realizes he has made a mistake.  He doesn’t know Grace well at all, and he certainly doesn’t want to marry her.  Extricating himself from his engagement proves more difficult than he had anticipated, with a new love interest complicating matters.

Once Wilfred has tried to let Grace down (only to learn, later that it didn’t take), he resolves not to make the same mistake again with the other young woman who has caught his attention, a grieving daughter, Flora:

Even if Flora’s clothes and dark hair were very becoming, he resolved that he would: Not. Be. Overcome.  There were many very attractive ladies in Narbeth – some real tomatoes! – but he couldn’t be proposing to them all.  He had learned that now, and felt another pang of remorse towards Grace.  He dearly hoped she was well and no longer hurt.

Moments of real emotion are balanced with humorous episodes often involving the dead:

Mrs. Howell-Thomas was certainly proving less compliant in death than she ever was in life.  But it was like that.  These elderly Welsh ladies who spent their life distributing hymn books at the door of the Bethesda Chapel and making lemon curd for the Harvest Festival – as soon as they popped their clogs, that was it, couldn’t get them to do anything you wanted.  Christian values went out the window once they’d kicked the bucket.

Author Wendy Jones lives in London, and The Thoughts and Happenings of Wilfred Price seems to have garnered more attention across the pond than here.  The Guardian called it “a compassionate drama about a small, very tightly bound, ancient corner of the world.”  The Scotsman loved its “slightly old-fashioned language” and found it “thoroughly enjoyable.”  I cannot think of a greater pleasure over a cup of afternoon tea.