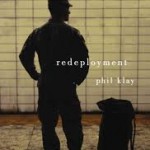 In case you missed the big announcement this morning at 8:40 on NPR, the National Book Award short listers are:  Redeployment, by Phil Klay (reviewed by Carolyn Hall on Bacon); All the Light We Cannot See, by Anthony Doerr (reviewed by Elizabeth Lamar on Bacon); Lila,

by Marilynne Robinson (review to come by Sarah Puryear on December 16th), Station Eleven, by Emily St. John Mandel (my review to come “very soon,” leaving myself maximum flexibility), and An Unnecessary Woman, by Rabih Alameddine (anyone want to review it?).  For entertaining and informative commentary on these books and the other National Book Award short-listers for nonfiction, poetry and young people’s literature, check out NPR’s blog “the two-way” here.  I am delighted to have recently discovered this blog, which features “the daily lowdown on books, publishing, and the occasional author behaving badly.”

In other breaking news, the Man Booker Prize was awarded yesterday!  Love that prize, though I’m a bit sorry it didn’t go to Joshua Ferris for To Rise Again at a Decent Hour (click here for Bacon review).  Here’s what Colin Dwyer has to say, on the two-way:

Richard Flanagan has taken home the Man Booker Prize for his World War II novel, The Narrow Road to the Deep North.  Announced Tuesday night at a ritzy ceremony broadcast on the BBC, Flanagan’s win spells an award of about $80,000 and inclusion on a list of popular past winners, such as Hilary Mantel and Eleanor Catton.

Flanagan’s win also means that fears of an American conquest of the Booker have so far proved unfounded.  Despite expanding to include American authors for the first time, and even featuring two on this year’s shortlist, Britain’s most prestigious literary prize has instead gone to an Australian writer for just the third time in the award’s 46-year history.