You might find Friend of Bacon Brent Moody with a knife in hand at the office or after hours – but he’s no Dr. Jekyll and Mr. Hyde!  By day, it’s the instrument of a surgeon; by night, it’s the painter’s knife he prefers.  (Who even knew such a tool existed?  I’m learning new things every day.)  “I like painting with the knife rather than the brush right now,” Brent says.  “It is a metaphor for life.  It can be messy and will give unexpected results, but those results can be a wonderful surprise.”  Take a look at one of his very lovely, recently completed oil landscapes: 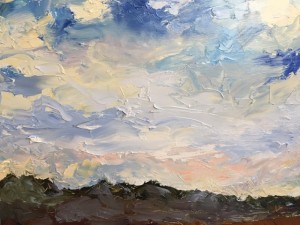 Brent loves his family and community, his work and his art; he’s also very interested in good governance, and today he shares his thoughts on Richard Epstein’s recent work, The Classical Liberal Constitution: The Uncertain Quest for Limited Government.  Professor Epstein teaches at New York University, and The Liberal Constitution was published by Harvard University Press in 2014.

“The devil can cite Scripture for his purpose.”  Antonio, The Merchant of Venice. William Shakespeare. 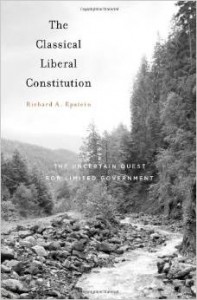 I was drawn to NYU Professor Richard Epstein’s new book about our Constitution after closely following the legal challenges to the Affordable Care Act.  Individuals on both sides of the issue discussed the Constitution, many with an air of authority and certainty, but seemingly no real understanding.  I also heard sitting members of the Congress mangle the Constitution.

In this timely work, Professor Epstein rides to the rescue for anybody wanting a deeper understanding of the fate of our Constitution.  Unless you happened to go to law school, your formal education on the Constitution probably ended with its birth.  As we all know, a lot has happened since then.  The Classical Liberal Constitution tells this part of the story – the story of its continuing life.

But first, some quick background.  The Constitution is small, I mean very small – you can fit it in your pocket.  The Federal Government is really huge.  At only 600 pages of reading time, The Classical Liberal Constitution is an efficient way to understand how we got from Thomas Paine’s ideal that “Government even in its best state is but a necessary evil; in its worst state, an intolerable one” to an unending maze of federal bureaucracies.

The topics range from the surprisingly interesting, such as standing – who has access to a remedy though the federal judiciary – to more well-known contemporary issues of speech, religion, sex discrimination and affirmative action.  Some attention is even paid to the ultra-hot issue of the individual mandate in the Affordable Care Act and the tortured logic required to uphold it.

The work provides the historical context and development of the modern application of various Constitutional issues.  A “how did we get here,” if you will.

Really?  Interstate commerce?  If you are like me and apply a bit of common sense to this scenario you would conclude that not only did the farmer not engage in interstate commerce, but no commerce at all.  Yet, the Supreme Court decided that this farmer did in fact participate in the interstate market for wheat.  I am not making this up.  Professor Epstein goes through the bizarre constitutional interpretation that resulted in the case of Wickard v. Filburn.  Filburn being Roscoe Filburn, the farmer who ran afoul of the Federal Government’s wheat cartel created by the Agricultural Adjustment Act.  My slightly tongue-in-cheek summary belies the in depth analysis and explanation that the Professor provides.  Why did the Federal Government establish a wheat cartel in the first place?  The Sherman Anti-Trust Act sought to eliminate cartels.  Professor Epstein poses a most thought provoking question.  If private cartels are bad, why are government cartels good? 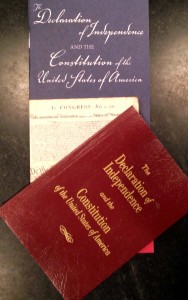 Professor Epstein weaves two other central freedoms throughout his analysis: the freedom of association and the right to exit.  These freedoms are powerful checks on excessive government, especially at the state and local levels.  The freedom of association has an implied second freedom, the freedom not to associate (the right to be left alone).  In the classic liberal view of rights, this means that your rights only extend so far as they do not infringe upon the rights of others.  Taking this stream a bit further explains why the framers were concerned with negative rights, enshrining in the Constitution what the government cannot do to you.  Negative rights are much easier to broadly apply in the sense that all parties are treated equally.  “The Congress shall make no law … abridging the freedom of speech.”  Such a right, a right not to have one’s speech interfered with, can be applied to one person without imparting any obligation on another.

The right to exit is a powerful countervailing force against untenable governance.  If you or your business is unhappy in a state, you can exit to seek greener pastures.  Economists Arthur Laffer, Stephen Moore and Jonathan Williams have demonstrated the actual impact of the right to exit.  States with better economic policy are growing faster than those with those lacking such policies.  While exiting a state can be difficult, exiting a country may be impossible, thus a concern that bad Federal policy in effect traps all citizens.

Who should invest the time in this work?  If you have a concern about the size, scope and functioning (or perhaps dysfunctioning) of our Federal Government, I think you will be enlightened.  While I was most interested in the aspects dealing with the Federal Government’s influence in economic matters and individual rights such as speech, property and contracts, the analysis of rights in areas such as race and sex are very well done and thought provoking.  A legal background is absolutely not required to enjoy and understand the book.  However, readers in this camp will benefit from a little bit of homework.  There are numerous free online resources that provide greater details to the legal cases that Professor Epstein cites.  A little time reading these cases will enhance the overall meaning of this well-composed work.