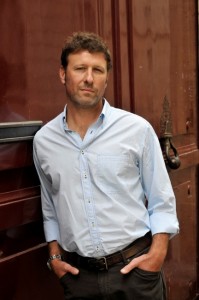 When you’re meeting a person for the first time – at a Starbucks, say – it helps to know how to identify each other.  “I’ll be easy to spot in a bright pink coat,” I emailed Nashville author Adam Ross.  “I’ll be topless in a cape, tights, and rainbow wig, so I should be easy to spot as well,” he replied.  Not exactly what I’d expected from Ross, constantly heralded as a “dark” writer.  I’m expecting a serious, tortured Bruce Wayne type; he proves to be more entertaining.

You’ll recall that Ross made the front page of the New York Times Book Review a few years back with his debut novel, Mr. Peanut (reviewed by Scott Turow).  Stephen King called it “the most riveting look at the dark side of marriage since Who’s Afraid of Virginia Woolf?… It induced nightmares, at least in this reader.  No mean feat.”  Ross followed up in 2011 with a collection of short stories, Ladies and Gentlemen, which he had written simultaneously with Mr. Peanut over more than a decade.  During this time, he was writing early each morning and on weekends while gainfully employed by the Nashville Scene and later teaching at Harpeth Hall.  I was reminded of this author in our midst by his terrific essay at Chapter16.org last month on – of all things – failure.

Following the success of Mr. Peanut and Ladies and Gentlemen, he’s had some fun opportunities.  It’s pretty great to sit on panels with authors like Jennifer Egan, Karen Russell and Gary Shteyngart.  It was nice to have the Hodder fellowship at Princeton.  Maybe even better: he, the wife and two daughters just returned from five months in Berlin, where he had a fellowship at the American Academy.

He’s currently working on a novel called Playworld about “a really bad year in the life of a child actor.”  Ross grew up in New York City – a child actor, the son of an actor – but he won’t go so far as to admit that this novel is autobiographical.  “Writers are constantly toggling back and forth between their own stories and their imagination.  I am aiming for truth, not honesty – different things,” he says.

I asked him how it feels to write given the pressure of tremendous initial success.  “After a while the noise dies down,” he says, “and you get busy writing and making peanut butter and raisin bread sandwiches for one daughter and practicing lacrosse with the other.  You don’t have time to dwell on past success.  If you spend enough days at home alone, you just stop feeling the pressure.  You settle into a working rhythm.”  He also thinks that it helps to have come to success later in life (Mr. Peanut didn’t publish until he was 44). 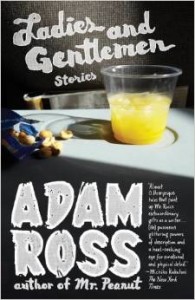 We spoke most about his short story collection, Ladies and Gentlemen, which I loved.  I found Ladies and Gentlemen a kinder, gentler read than the murderous and anxiety-inducing Mr. Peanut.  I’m embarrassed to admit that I had to put that one down.  It made me very agitated and inexplicably angry at my husband when I started it several years ago.  (Is this a strange compliment to the power of the prose?)  I thoughtfully gave my copy to a good friend.  Ladies and Gentlemen didn’t cause such inner turmoil, and I’m holding onto it.  To be clear, Ladies and Gentlemen is no pleasant stroll in the park; it begins with an epigraph from George Eliot: “Cruelty, like every other vice, requires no motive outside of itself; it only requires opportunity.”

The stories range widely – from one man’s harrowing job search in the opening story to an encounter on an airplane that makes a woman rethink the rest of her itinerary (and the rest of her life) in the last.  In between, you meet lovers, parents, husbands, and wives, in New York, in Nashville, and on a couple of college campuses.  You’re never far from several questions that link the collection:  To what extent can we make good (and morally right) choices in the middle of difficult (and compromised) lives?  To what extent are we capable of change?   “The capacity for change is the hardest thing we are tasked with,” Ross reflects – and says that this capacity for choice and for change permeated his thinking in all of the stories.

The collection’s most powerful story to me is “When in Rome,” the tale of two brothers whose lives have taken radically different directions.  The older brother is an exhausted, successful lawyer who may have treated his younger brother poorly as a child.  The younger brother, whose career path has been anything but straightforward, is dating a beautiful and engaging woman who may be in the process of leaving him.  As the older brother attempts to mend his relationship with his brother, he thinks about the intense forces that pull them together and drive them apart: “…these distances between siblings, I suspect, might be a birthright that’s as strong and arbitrary and ineluctable as love….”  As in many of Ross’s stories, a twist at the end leaves you both shocked and uncertain about much that came before.

Likewise, in many of Ross’s stories, currents of hope and hopelessness collide.  A dear boy on the cusp of becoming a man kisses his best friend’s older sister – at her invitation – and there is a moment of such joy (and later, insight) that you want to sing.  Another young man, telling his girlfriend “I love you” – though he is not entirely certain he does – believes “that if I verbalized it the feeling itself might come, as a vine grows toward the nearest higher thing.”  Ross’s characters are often groping for and growing towards the nearest higher thing – and it never feels completely too late.

“These are morality tales, expertly written and punched up with sex and death,” writes Emily Cooke in The Guardian.  I think that’s what I’ve been trying to say.

My dear husband, Gus, knows to get me chocolate covered pretzels and chocolate robed caramels for Valentine’s Day (Godiva, please).  I’ve been known to welcome a gift in a small box.  I’ve also found myself cruising the aisles at Walgreens a day or two after Valentine’s and picking up a few lonely boxes of chocolates – so wrong!  Don’t do this, friends.  Give yourself the delicious stories in Ladies and Gentlemen instead.

Adam Ross is happy to discuss Ladies and Gentlemen and/or Mr. Peanut with your Nashville book club.  Seriously, invite him!  (But not for the third week in April, when I’m asking him to mine.)  Please send an email to Mark Kessler, who helps manage his calendar.

Thank you so much to Margaret Renkl, editor of Chapter16.org, for the introduction to Adam!