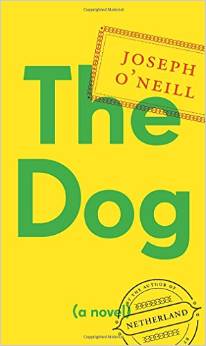 Pepper was bratting around the kitchen one cold day when I was trying to read.  She couldn’t be content with anything – neither toy nor bone nor bed nor crate.  I found myself equally out of sorts, though for a different reason.

I put down the book I’d been reading.  “You look perplexed.  And angry,” Pepper observed.

“I am perplexed.  And angry,” I replied.

I had made myself finish The Dog, by Joseph O’Neill, as if forcing down a big meal long after I was full.  By the last page, I felt bloated on words and meaninglessness.  Joseph O’Neill is very smart and clever, and this is undoubtedly a very smart and clever book, but he entirely lost me.  At the end of the day, I want to know what an author finds meaningful in life.  What is important or terrible or wonderful or funny about being human?  It doesn’t help me much if an author seems to throw up his hands and say that none of it means much of anything.  I was expecting to love this book, as I had loved O’Neill’s previous book, Netherland.  I felt betrayed in addition to everything else.

In The Dog, the unnamed narrator, a lawyer in his mid-30s, breaks up with his girlfriend, who is a more successful lawyer at the same firm.  Perhaps not surprisingly, she makes things hard on him at work.  He feels he must leave New York and decides to take a shady job with a friend’s family business in Dubai.  While in Dubai, he scuba dives for recreation and becomes obsessed with a fellow scuba diver’s double life.  We learn a fair amount about this fellow diver and his first wife, living in Chicago, and his secret wife in Dubai.  We learn a lot about what it might have felt like to live in Dubai a few years ago, perhaps the only redeeming quality of the book for me.

She hopped up onto the sofa with me. “I’m feeling empty and somehow angry too,” she said. “Mostly bored.  But maybe we should try to change our state of mind.  It’s not really fair – or kind – to inflict our angry, empty selves on the rest of the family today.”

She turned on her ipad and went to the New York Times app, where she quickly found exactly what she was looking for (now it’s my dog, too, not only my daughters!)  “Take a look at this great article in last Sunday’s New York Times by the editor of the Modern Love column, Daniel Jones.  Based on the thousands of submissions he receives each year, he described “How We Write About Love.”  He made some acute observations, too:

How we write about love depends on how old we are.

The young overwhelmingly write with a mixture of anxiety and hope.  Their stories ask: What is it going to be for me?

Those in midlife are more often driven to their keyboards by feelings of malaise and disillusionment.  Their stories ask: Is this really what it is for me?

And older people almost always write from a place of appreciation, regardless of how difficult things may be.  Their message: All things considered, I feel pretty lucky. Pepper read the rest of the column to me.  I wondered if I might try to learn a thing or two from all those older people sending in their columns to Modern Love.

“All things considered, I feel pretty lucky to be able to read a lot of books, even some I don’t understand.”

“All things considered, I feel pretty lucky too,” Pepper said, “I know I am loved.”

She bounded to the door, and I followed.