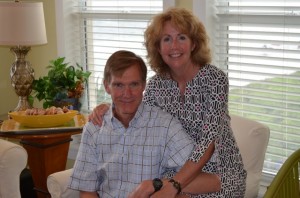 My dear friend Caroline Shockley and I were talking about Valentine’s Day.  Caroline, you may know, is the mother of two very active boys who have kept her at the playground (initially), and later, pool, track, baseball field and basketball court.  Caroline was an only child herself and by all reports a “girly girl” growing up; I’ve been wowed over the years by her extreme boy mom skills.  That girly girl’s still in there though – I see it in the soft and pretty way she wears her hair; her perfectly coordinated outfits; the way she sets a dinner table; and most especially in the presents she wraps so beautifully each Christmas and birthday.  I absolutely love her childhood memory of Valentine’s Day: “At Nannie Berry Elementary each year, we had a contest to determine the best decorated Valentine’s box – and mine won in 5th grade!  I can still picture it – beautiful white paper with red rick rack trim including pom-poms and a heart-shaped opening for the valentines.”  I can just imagine the joy in that little girl’s heart.

Valentine’s Day can get more complicated over time; love as you grow older is of course more closely intertwined with death.  Caroline’s beloved grandmother died on Valentine’s Day many years ago.  Her father-in-law’s birthday was on Valentine’s Day, and she still misses him, six years after his death.  She had a special love for Russ, who modeled exceptional kindness and generosity of spirit for all of his long life.

Caroline has much to enjoy with the men in her life this Valentine’s Day.  Her husband Gary “is always wonderful to me on Valentine’s and sends flowers and usually gets me a wonderful book or two.  The boys enjoy Valentine’s – what’s not to love – chocolate and a little gift or two.”  I am grateful for my sweet Caroline on Valentine’s Day; she is surrounded by friends who love her dearly.  Today, she shares her thoughts on a book about love and belief in the face of death, The Children Act, by Ian McEwan.

“Her hope was that she didn’t look too much like a woman in crisis.” 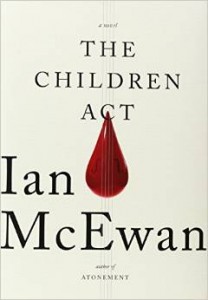 Meet Fiona Maye, British High Court Judge in the Family Division, who has just learned that her husband of many years feels the passion has gone out of their relationship and has proposed an open marriage.  In the opening chapter of Ian McEwan’s latest novel, The Children Act, an intricate tango of Fiona’s personal and professional life plays out.  In the midst of what Fiona feels is a “shameful proposition” by Jack the pressure of the decisions she makes on behalf of others as a judge intersperse her thoughts.  One case involving separating Siamese twins has weighed heavily on her for weeks, and unbeknownst to Jack has caused personal anguish and much of the distance in their marriage.

In the midst of her emotional turmoil, Fiona receives notice from her clerk that a new case will be brought before her and must be acted on quickly.  Adam Henry is three months shy of his eighteenth birthday, a Jehovah’s Witness, ill with leukemia and in desperate need of the blood transfusion his religion considers a sin.  Fiona must decide whether to rule in favor of the hospital and allow a transfusion, or for Adam and his parents, which would most likely cause his death.  Adding to the difficulty of the case is that Adam is within weeks of legal age and having the right to make the decision without interference from the courts.  Fiona must balance the rule of law and the rights of people with devoutly held beliefs.  In order to do so, she decides that she must meet Adam to determine if he is following his own beliefs and not those of his parents, is aware of all the facts, and understands the ramifications of refusing the transfusion.  The meeting has a profound effect on both of them, and they connect over music, poetry and a love of words.  Like most 17-year olds, Adam thinks he understands everything in life, and Fiona, nearing 60, realizes how little either of them really knows.

Ian McEwan, an avowed atheist, does a masterful job of weaving between the ethical decisions made by law and religious beliefs that are faithfully held.  The title of the book, The Children Act, comes from the British legal code of the same name that defines a child’s welfare as the court’s paramount consideration when determining any question with respect to the upbringing of a child.  In an interview with The Guardian, McEwan said the idea for the book came to him during a dinner party with a number of judges.  After listening to them discussing difficult cases they had decided, he picked up one of the decisions and started reading it.  He thought the decision read like a short story and realized that there is a commonality between the legal profession and novelists.  He explains, “The family division is rooted in the same ground as fiction, where all of life’s vital interests lie, with the luxury of withholding judgment, a novel could interpose itself here, reinvent the characters and circumstances and begin to investigate an encounter between love and belief, between the secular spirit of the law and sincerely held faith.”

The theme of secular versus religious ideology runs throughout the novel.  Fiona realizes that what is lawful is not always identical to what is right for everyone.  The moral complexities of the cases she must decide and her own personal situation often leave her feeling stunned and empty.  Yet Fiona keeps on working for what is right, just, and in the best interest of children.  It is beautifully and succinctly summed up when Fiona ponders, “Religions, moral systems, her own included, were like peaks in a dense mountain range seen from a great distance, none obviously higher, more important, truer than another.  What was to judge?”