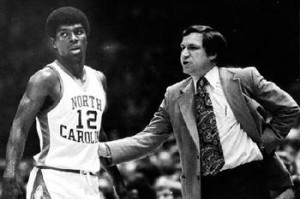 On the latter:  Coach Dean Smith was a part of my childhood more than any other “celebrity” I can remember, though I think he would have hated that term.  I don’t remember ever not being a Carolina fan, growing up in Raleigh, the child of an alum.  My Dad went to Carolina in the 60s and always talked about Coach Smith in reverent terms, especially his commitment to civil rights and his players.  My Dad took Carolina basketball seriously, and so did I:  we sometimes had to walk away from a game on TV if it got too close at the end.  My love affair with Carolina basketball only continued in grad school and law school (my future husband held a coveted position as ticket distributor for the men’s basketball games, and this didn’t hurt his chances).  It has made me cry to hear Coach Smith’s players talk about him in ways that can only be described as love.

Very little attention has been given in the news stories to Coach Smith’s dementia in the last 5 years of his life.  That is possibly as it should be.  But it has occurred to me that it is a strange kind of silence as well.  There is no shame in what he experienced, and why should one pretend that this phase of his life didn’t happen?  It does not diminish the man.  It is simply a part of his story.

This silence, and his death, made me pick up a book I’ve had in my stack:  Still Alice, by Lisa Genova.  My Mom read it and passed it along to my Dad, who then passed it along to me.  (Don’t you love the journeys some books make?)  I am overwhelmed by the wisdom, grief, and life-affirming qualities of this beautiful novel, written by a woman who has a PhD in neuroscience from Harvard. 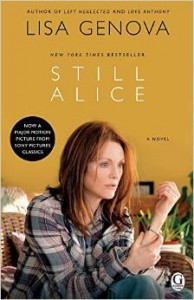 It is the story of Alice Rowling, a Harvard professor who at the age of 50 learns that she has early-onset Alzheimer’s.  Her husband, also a Harvard professor, does not respond well; he devotes himself to researching promising new cures but not to appreciating what is left of their life together.  Their grown children struggle to figure out new roles while friends and colleagues fall by the wayside.  Alice’s worst nightmare comes true: she does lose who she was, almost completely.  But other things are found.

Genova made a bold move in self-publishing this book originally.  When she had completed the manuscript – motivated by a desire to help convey some of the truth about Alzheimer’s and demystify it for early stage sufferers and for caregivers – she sent it to the Alzheimer’s Association.  They liked it so much that they wanted her to write a blog for them when they launched their nationwide “Voice Open Move” campaign within the month.  They said they would give the book their stamp of approval.  Genova knew that finding a traditional publisher could take months if not years, so she decided to self-publish, a riskier path.  It was a good call.  Still Alice is now a New York Times bestseller (published by the eminent Simon & Schuster) and has been made into a movie starring Julianne Moore (in theaters now, if one could get to a theater).

“Before Still Alice was even published, it seemed to me that I’d created a story that, although fictional, was in fact a truthful and respectful depiction of life with Alzheimer’s,” writes Genova. “And it was unique in that it presented this depiction from the point of view of the person with Alzheimer’s, rather than the caregiver.“  Still Alice does put me in mind of two other reads.  Like The Housekeeper and the Professor, by Yoko Ogawa (see Guest Post by Joel Bezaire), it clearly has an educational component.  It reminds me far more of a grade school classic,“Flowers for Algernon,” a story I hope I’ll never forget.