If winter has left you feeling more than a little grumpy and cooped up, you might consider one of the fun and fantastical reads in today’s post as we dream of Spring! 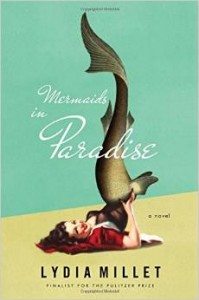 Mermaids in Paradise, by Lydia Millet, makes the top of my list: smart, funny, slightly wacky, and in the end, deeply moving.  Actual mermaids make several (underwater) appearances in this novel, set in the Caribbean – a choice that seems risky when you first read about it on the dust jacket or in a review – but Millet works this bit of fantasy so deftly into her story that you find yourself believing in them wholeheartedly from first page to last.

Main characters Deb and Chip travel to an island resort for their honeymoon, where they meet a marine biologist who first spots the mermaids and shares her find with them.  What follows is a tale of corporate and neo-colonial greed and exploitation as well as a possible murder – none of it, somehow, too heavy.  All of it is a bit topsy-turvy and off-kilter: kidnappings are botched, evil masterminds turn out to be completely ineffective, and great white whales get a lot accomplished in a day.  The narrator, Deb, kept me in stitches, and her husband Chip is a prince: “I liked so many people, when I got to know them, and when I was drinking,” Deb reflects.  “When I was drinking I could almost be Chip, I thought, almost that nice.  But not quite.”  You’ll be rooting for Deb, Chip, the marine biologist, and the mermaids – and in the end you’ll find a stranger hope and happiness by a cheap motel pool than you could ever have dreamed. 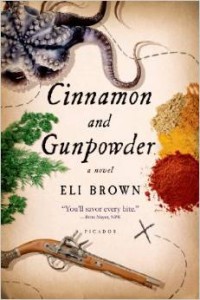 You’ll also find strange happiness on a pirate ship – as does the captive hero – in Eli Brown’s enchanting novel, Cinnamon and Gunpowder.  It is 1819, and the beautiful pirate Mad Hannah Mabbott has grand plans involving revenge, love, and treasure.  After slaughtering the dastardly Lord Ramsey at his own dinner table, she kidnaps his chef, Owen Wedgwood, and brings him to sea as her personal cook.  Each Sunday he must prepare a meal beyond her wildest dreams – or else.  He must work cleverly with a limited supply of ingredients.

Chef Wedgwood manages to astonish her – and me!  On his preparation of a cod dish: “Between the opaque striations, wisps of fat clung to the crisp potato breading and resolved upon the tongue like the echo of a choir surrendering to silence.  The saffron warmed all together as sunlight through stained glass blesses a congregation, while the shrimp sauce waved its harlot’s kerchief from the periphery.”  You’d hardly be surprised if Mad Hannah fell in love with her chef.  Cinnamon and Gunpowder interweaves the history of the British opium trade with China with its foodie delights, so you also learn some history. 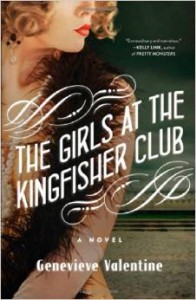 Spring Break reading isn’t first and foremost about your education, though.  It’s about enchantment and delight!  The Girls at the Kingfisher Club delivers both in the form of a modern spin on the Grimm Brothers’ fairy tale, “The Twelve Dancing Princesses.”  In Genevieve Valentine’s retelling, the twelve sisters are locked away in the attic of their father’s brownstone in Jazz Age New York.  Led by their indominatable sister Jo, the “General,” the girls find joy and release in dancing the night away at illegal speakeasies.  When their father begins to suspect their secret and tries to marry them off to suitors they haven’t chosen, Jo and her sisters must make bold and dangerous choices. “The Twelve Dancing Princesses” is one of the most unsettling of the Grimm Brothers’ fairytales, one that does not end particularly well.  Valentine has kept all of the darkness of the original tale but has brought the dancing sisters to life in a bold and imaginative way, and I’m so glad she also imagines for them an ending that feels strong, smart, and wise. 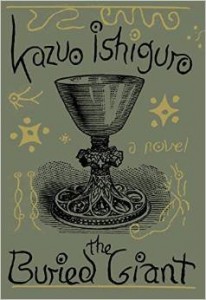 I’ve got high hopes for what Kazuo Ishiguro will do with fantastical/fairy tale/mythical material in a book I’ll be reading over Spring Break, The Buried Giant.  The Buried Giant just hit the bookstores and has received a great deal of media attention, including a front page review by Stephen King in the Sunday New York Times Book Review.  This highly anticipated novel is Ishiguro’s 7th, following such well-known works as The Remains of the Day and Never Let Me Go.  Reviewer Tom Holland of The Guardian notes that “[l]iterary fiction and dragons rarely go together.  This, though, has evidently not deterred Kazuo Ishiguro.  For all the constancy of his obsession with themes of memory and loss, he has always delighted in taking his fans by surprise…Now, in The Buried Giant, his first novel for 10 years, he has performed his most startling and audacious adaptation of genre yet.”  Holland goes on to say that Ishiguro’s work is “more than worthy” to take its place alongside the quests “of Sir Gawain, and Tennyson’s King Arthur, and Frodo.”  A grand, heartening epic is just what I need to break winter’s icy grip.  All good wishes to Bacon friends for Spring reading that warms the heart and enlivens the mind!