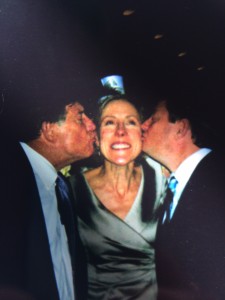 Holly Conner – in a bold and creative move – duck taped her younger brother Forrest to the door jamb when he was considerably smaller.  It seems he’s forgiven her, though: “Holly is the most loving, caring, supportive and adoring big sister he could ever ask for,” raves sister-in-law Stephanie.  “He loves her dearly, as do I!”

In the years since, Holly has directed her energy to more traditional and constructive endeavors.  She loves “helping people craft and tell their own stories” at Mimi Bliss, a company that conducts media and presentation training.  She enjoys facilitating her “fierce” book club and has been actively involved with Humanities Tennessee and the Southern Festival of Books for years.  A fringe benefit of these volunteer gigs:  some of Holly’s favorite book clubs have featured first-time authors she’s met at the Festival.

Holly reads twice a week at Cockrill Elementary because she adores her dear third grade friend, Ricardo.  She tries to model with Ricardo what she learned from her parents – love and very little judgment.  “I could trip on stage and fall off into the opera pit, and they’d cheer as if it were the greatest trip in history,” she laughs, talking about her parents.  She tries to come from a place of “lovement,” not judgment, in everything she does. 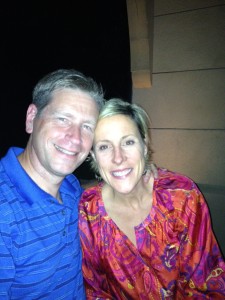 If you know Holly even a little bit, you know she’s a reader.  Favorite authors include Erik Larson, Laura Hillenbrand, Jane Austen, Edgar Allen Poe, and William Blake.  She loved A Separate Peace as a teenager, but says her favorite book of all time might be A Prayer for Owen Meany.  You might catch her watching Forensic Files on HLN if no one is looking, and while she’s at it, she’d like a big slice of Linus Catignani’s carrot cake.  Or some chocolate-covered cranberries and a glass of Apothic Red.

Holly recently stole a few moments away from her new husband (they just married in December!) to profile Nashville’s own Elizabeth Carden Phillips, writing under the name Elizabeth Carden, whose short story “The Pearl of Blenheim” won a major award and whose historical novel Mine Own Good Daughter will be published soon. 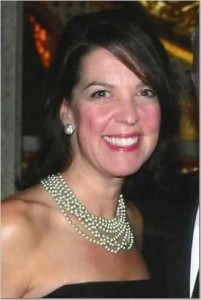 Though a fan of air-conditioning, Elizabeth Carden Phillips has always had a sneaking suspicion she was born a few centuries too late.  A devout Catholic, deeply faith-filled wife, daughter and mother of two daughters, she loves nothing more than to bury herself in historical fiction writing, her idea of the ultimate spa day.  As a child, Elizabeth was enamored by historical fiction (think Little House on the Prairie) and spent countless hours listening to stories of her grandparents.  Her grandfather served as an altar boy during masses at the Confederate Veterans home and fought in World War I in France.  “Those far-off events didn’t seem like that long ago to me.  Not surprisingly, my first novel (never completed but started it in 7th grade) was about a young soldier in World War I France.”  Elizabeth is drawn to people whose stories may have been under the radar, and her gift is finding those characters and shining a light on them.  “I would write a scene into a historical fiction novel based on what the character could have done, but not simply for effect, only if it fit their historical persona,” says Elizabeth.  That is exactly what she does in both her award-winning short story, “The Pearl of Blenheim,” and her soon to be published novel, Mine Own Good Daughter. 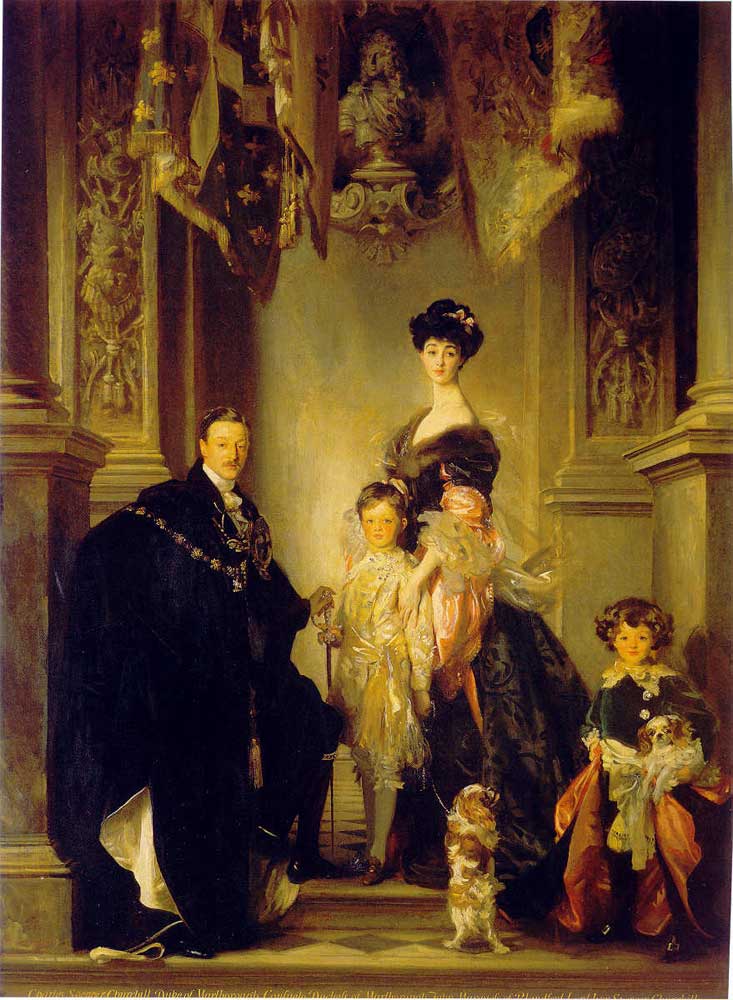 “The Pearl of Blenheim” is a short story that effortlessly captures your imagination, drawing you into a century-old world.  For those of us wanting more of Downton Abbey’s civility and charm, “The Pearl of Blenheim” is an excellent antidote.  It was the second place winner of the Historical Novel Society Short Story Award and part of The Beggars at the Gate & Other Stories anthology first published in Great Britain by the Historical Novel Society (www.amazon.com/The-Beggar-Gate-Other-Stories-ebook/dp/B00EZSXUKU).  “The Pearl Of Blenheim” is a glimpse into the life of Consuelo Vanderbilt, who married the 9th Duke of Marlborough, and whom many believe was an inspiration for Lady Cora.  The Duchess was even referenced in Downton Abbey this past season.  Unlike Cora, Consuelo’s marriage was not a happy one.  At their marriage in 1895, Consuelo’s father bestowed the duke with two and a half million dollars, which allowed the Duke to repair Blenheim and maintain his luxurious lifestyle.  However, Elizabeth’s beautifully written prose punctuates the Duke’s high opinion of himself and smug attitude towards his American heiress wife throughout their marriage:  “Without looking from the gilded ormolu mirror, she opened her jewelry drawer and pulled the iridescent balls from the worn velvet pouch.  With each wrap around her neck she felt choked and more constricted, but it would hide her neck and, perhaps, stave off her husband’s cruel remarks.”  In her short story, Elizabeth cleverly allows the reader to peek into the actual making of the Marlborough family portrait by John Singer Sargent (renowned American artist to European aristocracy), and her portrait reveal makes for an engrossing, quick read which made me thirsty for more on the lives of Consuelo, the Duke and Sargent’s abundant treasure trove of portraits.

When pressed, Elizabeth’s true dream is for Julian Fellowes to read “The Pearl of Blenheim,” ask her to write for Downton Abbey, and then produce her major historical novel, Mine Own Good Daughter. 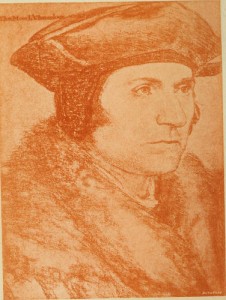 Set during the tumultuous reign of Henry VIII, Mine Own Good Daughter is the story of Sir Thomas More’s daughter, Margaret, and her faithfulness to her father and challenging relationship with her husband in a world collapsing around her.  It is a story of a daughter’s devotion to her father and the father’s devotion to his faith.  Henry VIII desperately wanted More’s public endorsement and approval to marry Anne Boleyn.  More’s convictions, however, would not allow him to accept the king as head of the Church of England, which he believed was equivalent to turning his back on the pope and his Catholic faith.  Elizabeth takes the reader into the gripping world of Margaret’s journey during her father’s life and his visible fall from grace for daring to stand for his beliefs rather than the whims of a king.

“I had always been interested in his faith, political savvy and courage since watching The Man for All Seasons in high school.  But the more books I read about him, the more I was intrigued by his daughter, Margaret, who was always in the periphery,” says Elizabeth.  She began doing research about Margaret but could find very little, although she was known as “the most brilliant woman in Britain” and the only person allowed to visit More during his imprisonment in the Tower of London.  Most of the existing letters he wrote during his imprisonment were written to “Meg,” which illustrates a beautiful father-daughter relationship.  “I knew I had to tell the story of this remarkable woman and soon got serious about writing a novel,” says Elizabeth.  “And 8 long years later, I completed my first novel, Mine Own Good Daughter.”

Following Margaret’s death, her daughter finds her journal where her mother sought forgiveness from her husband, writing, “And finally, my husband, I ask your forgiveness.  I never wished to hurt you, but I suppose a broken heart often cuts the ones closest to it.”  Elizabeth masterfully weaves a story of a complicated marriage, a love of a daughter and a father and challenges us through the journey of Sir Thomas More to examine what we might do in the name of faith, its consequences for our family, and our very soul.

Ironically, PBS will air Masterpiece’s adaptation of historical fiction writer Hilary Mantel’s Wolf Hall on Sundays from April 5th to May 10th.  Mantel paints More as a most unflattering, heartless torturer of heretics, and reinvents a powerful, smart, ambitious and effective advisor, Thomas Cromwell, as its protagonist.  Elizabeth claims it has been very hard for her to read Wolf Hall, especially the portrayal of a much-fictionalized More and Cromwell.  Elizabeth’s blog is a fun read and gives you an idea of whom she’d love to see cast someday as her More and his daughter:    http://elizabethcarden.com/2013/01/16/next-big-thing-blog-hop/

Perhaps one day the deeply religious Fellowes will take on the mantle of Mine Own Good Daughter and bring to life a far different Sir Thomas More as richly told by Elizabeth.  Before his beheading, Sir Thomas More blindfolded himself and exhorted the assembled crowd to witness his end “in the faith and for the faith of the Catholic Church, the king’s good servant but God’s first.”

I’ll never forget the poignant words the late John Seigenthaler used when describing the work and world of the writer at the 2010’s Authors in the Round dinner.  Seigenthaler remarked how lonely and isolated the world of a writer is, and how much they slave over their work in isolation.  Elizabeth echoed Seigenthaler’s sentiments, “There are no atta-boys or ongoing reassurances.  I am plagued with insecurity.  Is this what I should be focusing on?  Is this resonating with anyone?” 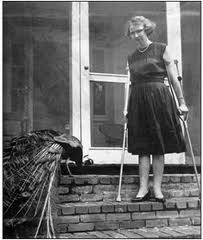 Finally Elizabeth quietly revealed to me that Flannery O’Connor is her “spiritual director” and quotes her as saying: “People without hope not only don’t write novels, but what is more to the point, they don’t read them. They don’t take long looks at anything, because they lack the courage.  The way to despair is to refuse to have any kind of experience, and the novel, of course, is a way to have experience.”

Elizabeth says, “You have to be chock full of hope to try and dive into writing.”  Elizabeth’s old soul is not only hope-filled, but fortunately she sprinkles hopefulness on all who are lucky enough to know her and to read her work.