It’s pretty outside – sure – and we’ve got our own special Sunday, but May is a hot mess for mothers with school-age kids.

Coping mechanisms include exercise, an extra glass of wine, and complaining.  I’ve tried all three over the years, and maybe you have too!  Today I begin a series on an additional way to stay sane in May: have just the right book in hand (or in car, or in purse).  I’m not saying you’ll have more than 15 minutes a day for it.  But reading in hookup can give you a mental break that makes the rest of the day go down easier.  These books are great even if May is just a pleasant month in Spring for you! 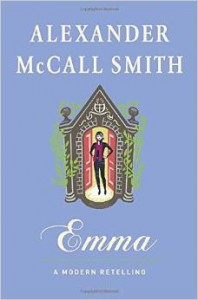 You’ll not find a more civilized and pleasing distraction than Alexander McCall Smith’s Emma, a modern retelling of the Jane Austen classic.  There’s no need to have read the original to enjoy this tale of a young socialite who learns some of life’s hardest lessons through dinner parties and picnics gone horribly awry.

Emma is especially interested in arranging a proper marriage for a beautiful but financially insecure young woman, Harriet, who comes under the sway of Emma’s strong personality.  The son of a local bed and breakfast proprietor is not nearly good enough for Harriet – oh no – and Emma will go to great lengths to prevent that match and arrange another.

Emma has very strong views about her own future:

“I don’t ever want to get married,” she announced. “Never.  Never.  Not in a thousand years.”

Miss Taylor [Emma’s former governess] was tolerant. “Millennia come round so quickly, Emma.”  She smiled again.  “I’ve already experienced one in my lifetime.  And you may think that of marriage now, you know, but one’s views do change.”

“Mine won’t,” said Emma, with conviction.  She was certain; she knew what lay ahead of her: she would continue to be pretty, clever, and rich.  That did not include getting married: pretty, clever and rich people did not have to bother with such things.

Emma can be opinionated, entitled and immature – but she can be awfully funny, charming, and generous as well.  Most importantly, she learns and grows.  Happy endings await, if not the ones she had planned.

Smith’s retelling of Emma is the third of six Austen novels reimagined for the 21st century as part of HarperCollins’ “Austen project.”  The first to be published was Sense & Sensibility by Joanna Trollope, the second was Northanger Abbey by Val McDermid, and next up is Pride & Prejudice by Curtis Sittenfeld.

Reviews for Smith’s Emma have been somewhat mixed.  Two reviewers across the Pond at The Guardian and the Telegraph didn’t much care for it.

American reviewers seem more enchanted, and I’m with them.  I agree with Kirkus that “[i]n less capable hands, it could all seem clunky and crass.  Instead, McCall Smith has written a delightfully droll, thoughtful novel that reflects on money’s enduring role in relationships as well as on the nature of this meddlesome heroine’s long-lived appeal.”

Cup of tea and a scone, anyone?  Don’t let May make you crazy.