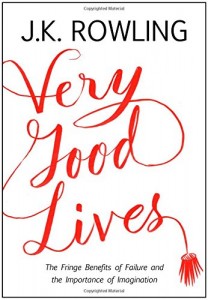 J.K. Rowling’s latest is perfect for a May graduate and – as a sidenote – might be just the encouragement you need yourself in a harried month.  Very Good Lives: The Fringe Benefits of Failure and the Importance of Imagination is a commencement address Rowling gave at Harvard a few years back, published in a lovely small hardback for the first time this spring.  It takes about ten minutes to read, plenty for a recent grad and sometimes for you and me.

Most of us know at least a little bit about Rowling’s journey from rags to riches, which this book in part chronicles.  I didn’t know that the time she spent at Amnesty International’s African research section in London had been so formative.  What she learned:  “Unlike any other creature on this planet,” she writes, “human beings can learn and understand without having experienced.  They can think themselves into other people’s places.”  This is what Rowling calls “Imagination,” and she encourages grads (and other humans) to embrace a life full of Imagination.  She also reminds us how failure can set us straight about where our true gifts lie.  This book gave me tremendous encouragement and a reminder of what I want my life to look like. 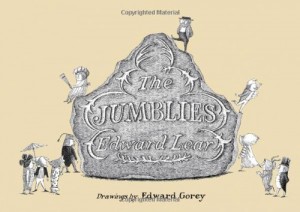 For the graduate, pair it with Edward Gorey’s illustrated version of Edward Lear’s “nonsense” poem “The Jumblies,” a poem which might be about nothing much but might also be about setting sail in the big world with courage, stubbornness, and a sense of humor.  I promise you that someone else has already gift-wrapped “Oh the Places You’ll Go.”  At the risk of sounding slightly unhinged – there’s no finer poem about life’s journey than “The Jumblies”!

And everyone said, who saw them go,
“O won’t they be soon upset, you know!
For the sky is dark, and the voyage is long.
And happen what may, it’s extremely wrong
In a Sieve to sail so fast!”

The nay-sayers were not entirely wrong.   The Jumblies did have some frightening moments.  But they also found the Western Sea and stayed in a land all covered with trees:

And they bought an Owl, and a useful Cart,
And a pound of Rice, and a Cranberry Tart,
And a hive of silvery Bees.
And they bought a Pig, and some green Jack-daws,
And a lovely Monkey with lollipop paws,
And forty bottles of Ring-Bo-Ree,
And no end of Stilton Cheese.

This is not a paean to consumerism, of course.  It sings the joys of discovering a whole new world – a world full of mysteries and delights as well as the glories of Stilton cheese.

When the Jumblies return, their elders give them a feast and drink to their health.  They say – if they live – that they too will – by sieve – set out on the big wide blue sea.

This is one of the jobs of the young:  to give us courage!

Right after we give it to them.