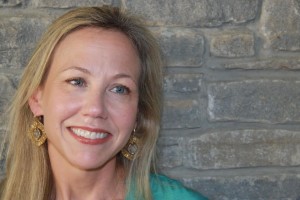 We’ve heard quite a lot about a certain mockingbird lately.  Today, Kate Satz reports on a hawk that’s also been flying high.  H is for Hawk, by Helen Macdonald, has received all kinds of critical acclaim since its publication in the UK in July 2014 and in the U.S. in March this year.  It has “proved to be a bit of a puzzle for critics,” part memoir, part nature writing, part something else that’s hard to put your finger on.  Those confused critics could have just asked Kate.  She illuminated it perfectly for me.

I am not a birder.  Nor was I looking for grief meditation in a summer read, but my friend Amy pinned me with her piercing blue gaze and emphatic index finger, not unlike a raptor pouncing on its prey. 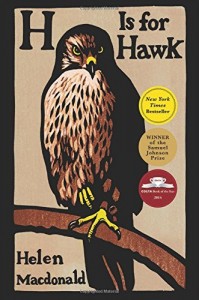 “You must read H is for Hawk.  Must.” So I picked it up, encouraged by the arresting cover design.  Within a page or two, I was captivated.

A research scholar at Cambridge, Helen Macdonald is a poet, a writer, and since childhood, a devoted student of falconry.  Upon the unexpected death of her father, she decided to train a goshawk, the most elusive and deadly of them all.  “When you are broken, you run.  But you don’t always run away.  Sometimes, helplessly, you run towards.”  Into the wild of grief.  Not unlike Cheryl Strayed in Wild, who takes on the notoriously difficult Pacific Coast Trail when she is completely unmoored by the loss of her mother, Macdonald acquires a goshawk, “the birdwatchers’ dark grail,” in a shifty exchange reminiscent of a drug deal.  She proceeds to train Mabel with the attentive intensity one gives a newborn, taking shelter in their forced solitude.  “Sitting there with the hawk in that darkened room I felt safer than I’d done for months.  Partly because I had a purpose.  But also because I’d closed the door on the world outside.  Now I could think of my father.”  Which she does, with tenderness and revelation.

Macdonald adored her father, an intrepid photo-journalist who obsessively watched and recorded the movements of aircraft across the war-torn skies of his childhood England.  She recalls a moment of childish frustration while waiting to spot sparrowhawks:

“I kicked at the base of the fence with my wellingtoned feet.  Squirmed and fidgeted.  Let out a sigh.  Hung off the fence with my fingers.  And then my dad looked at me, half exasperated, half amused, and explained something.  He explained patience.  He said it was the most important thing of all to remember, this: that when you wanted to see something very badly, sometimes you had to stay still, stay in the same place, remember how much you wanted to see it, and be patient.”

So too with grief.  As much as we labor to confine it neatly to memorial services and an acceptable number of excused absences, urging ourselves not to upset the daily march, grief stubbornly moves at its own pace.  Rituals of mourning offer no more security than hood, jesses or creance; slip them off, and grief is as wild and unpredictable, terrifying yet strangely beautiful, as nature’s most mysterious hawk.

Macdonald identifies with Mabel. “I popped the hood back over her head.  There.  Fleeting panic, nerves afire, and then she relaxed because the day had turned to night and I had disappeared.  The terror had gone.  Hoodwinked.  It was an ancient piece of trickery and an excusable one: the darkness would give her the space to set her frayed nerves to rights.  As it would mine.”  Before long, though, the peaceful solitude morphs into dark, paralyzing anxiety:

“I’d turned myself into a hawk – taken all the traits of goshawks in the books and made them my own.  I was nervous, highly strung, paranoid, prone to fits of terror and rage; I ate greedily or didn’t eat at all; I fled from society, hid from everything; found myself drifting into strange states where I wasn’t certain who or what I was.”  Eventually, Macdonald finds her way through this wild and home, realizing that “Hands are for other human hands to hold.  They should not be reserved exclusively as perches for hawks.”

My friend’s father, an Episcopal priest, used to talk about good grief.  Not as in Charlie Brown; as in the life-affirming grace we experience when faced with great loss.  The shaping of memory and understanding of ourselves, those we love, and the world around us.  To get there, we have to endure the wild within ourselves, the sorrow and the rage and the fear, all evidence of the love itself.  Grief is but love in another guise.  In its grip, Macdonald perceives the myriad ways her father lives both in memory and in who she is: an observer and an artist with language, as he was with a camera lens.  She finds lightness, realizing that “you can reconcile the wild.  You can bring it home with you.”

Perhaps more than any I’ve read, this book demonstrates how much the reader brings meaning to an author’s words.  I felt like H is for Hawk was written for me; given its worldwide acclaim, I’m clearly not alone.  Layers of language and meaning, gorgeous descriptions of landscape and memory, thoughtful reflections on history and identity, even the tortured presence of T.H. White, wretched falconer and author of the beloved The Once and Future King; Macdonald’s story is rich with joy and sorrow and wisdom.  I can only echo Amy’s words: you must read it.

For an introductory bio on Kate (and her prior post on Nancy Horan’s Under the Wide and Starry Sky), please click here.