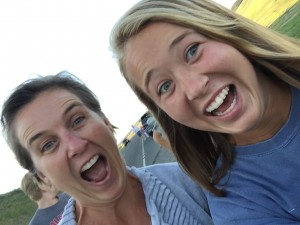 Bear sighting at Yellowstone with Ellie

Monica McDougall is just back from an Out West adventure:  two weeks, two families, two RV’s, too much fun!  (One painful, beautiful book – more on that later.)

The traveling gang was especially grateful for friends along the way inviting them to their homes for dinner NOT served on paper plates.

Monica loved their time on the road, which was “fun and super funny, but to be in my bed again… wow!”

Today she shares her thoughts on a novel she read on the trip, heavy on the heart but deeply rewarding as well. 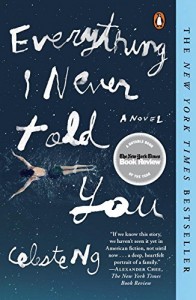 “Lydia is dead.  But they don’t know this yet,” are the first lines of Celeste Ng’s debut novel Everything I Never Told You.

Lydia Lee is the favored, middle child of Marilyn and James.  Meeting at Harvard in the 1970’s, the Lees were considered an unlikely couple:  Marilyn’s blond hair showed in sharp contrast to James’ dark Chinese features.  Their external differences were minor compared to their internal similarities.  They shared a strong need to be different from their parents and rewrite their futures.  “Something inside her said, He understands.  What it’s like to be different.”

James’ parents immigrated during the Depression and found work on the grounds and in the kitchen of an elite boarding school.  Here, James was admitted and here began his hyper fixation on his “otherness.”  Believing his parents the obstacle, James ceases communications with them and sees a PhD as his deliverance from being an outsider.

When Marilyn was awarded a scholarship to Radcliffe, her mother was delighted at all the eligible Harvard men she would meet.  Marilyn’s educational goals were honed by her mother’s love for domesticity, and her focus on an MD becomes pinpoint.  An unexpected pregnancy derails all plans, but Marilyn and James seem to find great consolation in their love for each other and the family they are beginning.  “A few months later, when they married, they would make a pact: to let the past drift away, to stop asking questions, to look forward from then on, never back.”

The Lees have three children that all physically resemble James, but it is Lydia’s blue eyes that give him hope.  All his desires for social acceptance are firmly pinned on her shoulders.  With Marilyn’s education sidelined by the birth of Nate, their only son, she transfers all her intentions and attentions to Lydia her oldest daughter.  And, thus the unraveling begins.

Ng does such a fantastic job of slowly, layer by layer, revealing her characters over time.  The narration jumps through the years, exposing the distressful health of the family.  The sacrificed dreams and the kept secrets crack the surface of familial facade and as the sad crumble begins the reader remains as transfixed as watching a train wreck.

Friends, this one hurts.  A kind, well intended question by James to Lydia takes my breath.  As the reader with the inside view I am horrified at the expectations, the miscommunications, and ultimately the ending.  I feel the fierce love the Lees have for their children.  I feel that same love for mine.  I can see that Marilyn and James only want the very best for their children.  I want that for mine too.  I could see the ending coming but could not change it or dare to put the book down.

My oldest child, my only daughter is a senior in high school.  I wonder if watching my parenting these last 18 years a silent observer would gasp.  Undoubtedly so, many times.  Yet here we are.  She begins to walk away and I must stand and watch.  I pray, I pray I have equipped her well, loved her well and now I must wish her well.   Blessings to us both.

I’ll read Everything I Never Told You because of Monica’s recommendation – if I can summon the courage.  Other reasons to read it: