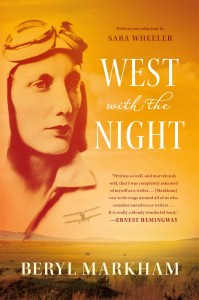 A woman long dead – marvelous and bold and complicated – is the subject of Paula McLain’s new novel, Circling the Sun.  Read this book if you want to spend more time in Paula McLain’s company (The Paris Wife).  I wouldn’t blame you!  It’s a suspenseful, engaging read, focusing on the storied love triangle between Markham, Karen Blixen, and Denys Finch Hatton (think Out of Africa, published under Blixen’s pen name Isak Dineson).  If – on the other hand – you want to know something of the wit and spirit and glory of Beryl Markham herself, you should really read her stunning memoir published in 1942, West with the Night (republished to great acclaim in 1983).

I have strong feelings about Beryl Markham (obviously), and it’s not just admiration for her accomplishments as a pilot in the golden age of solo flying.  I suppose it’s more of a complete and utter fascination with her life as recounted in West with the Night.  Born in England but raised in British East Africa, she is bold – adventurous – brave – sometimes foolish; a hunter of lions; a trainer of horses; a lover of airplanes and men.  For a time, she was a great celebrity:  the first woman to fly solo across the Atlantic, in 1936.

West with the Night went out of print rather quickly after its original publication despite making an impression in high places.  Ernest Hemingway recommended it to his friend Maxwell Perkins in a letter:  “Did you read Beryl Markham’s book, West with the Night? …She has written so well, and marvelously well, that I was completely ashamed of myself as a writer.  I felt that I was simply a carpenter with words, picking up whatever was furnished on the job and nailing them together and sometimes making an okay pig pen.  But this girl, who is to my knowledge very unpleasant and we might even say a high-grade bitch, can write rings around all of us who consider ourselves as writers … I wish you would get it and read it because it is really a bloody wonderful book.”  (I wonder what she would have said about you, Papa!)

I’ll offer you two passages to highlight the differences between Circling the Sun and West with the Night.

From the first chapter of Circling the Sun: 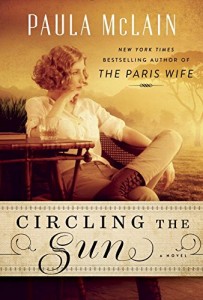 “I have a chart that traces my route across the Atlantic, Abingdon to New York, every inch of icy water I’ll pass over, but not the emptiness involved or the loneliness or the fear.  Those things are as real as anything else, though, and I’ll have to fly through them.  Straight through the sickening dips and air pockets, because you can’t chart a course around anything you’re afraid of.  You can’t run from any part of yourself, and it’s better you can’t.  Sometimes I’ve thought it’s only our challenges that sharpen us, and change us, too – a mile-long runway and nineteen hundred pounds of fuel.”

There is nothing wrong with this writing.  It simply doesn’t sound anything like Beryl in the pages of her memoir.  It especially doesn’t sound like anything she would have said about flying.  It sounds like something you’d read in a contemporary self-help book.  And I felt the presence of the present throughout.

In contrast – this from the first chapter of West With the Night:

“Africa is mystic; it is wild; it is a sweltering inferno; it is a photographer’s paradise, a hunter’s Valhalla, an escapist’s Utopia.  It is what you will, and it withstands all interpretations.  It is the last vestige of a dead world or the cradle of a shiny new one.  To a lot of people, as to myself, it is just ‘home.’  It is all these things but one thing – it is never dull.

From the time I arrived in British East Africa at the indifferent age of four and went through the barefoot stage of early youth hunting wild pig with the Nandi, later training race-horses for a living, and still later scouting Tanganyika and the waterless bush country between the Tana and Athi Rivers, by aeroplane, for elephant, I remained so happily provincial I was unable to discuss the boredom of being alive with any intelligence until I had gone to London and lived there a year.  Boredom, like hookworm, is endemic.”

There is life and spirit in those words.  In the pages to come, there are prejudices and pride, humor and wit, sorrow.  West with the Night transports you to a time and place far distant – remotest Africa – when flying an “aeroplane” anywhere in the world was still a thing of wonder.  Circling the Sun somehow never feels far enough from home.

There have been questions regarding Markham’s authorship of West with the Night.  It has been alleged that she had help from a lover (though “scholarly” opinions differ as to which lover).  I have to agree with Robert O’Brien that “the aesthetic power that compelled Hemingway’s praise, the book’s republication, and its subsequent popularity, remains whether we regard West with the Night as autobiography, biography, or … a combination of the two.”

Paula McClain will speak August 4th at 6:15 p.m. at the Nashville’s Downtown Public Library as part of the wonderful Salon@615 series.