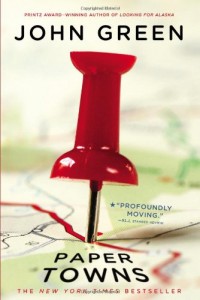 You’ll quickly learn how little you know about anything, including how to talk about it.  I’m being schooled regularly by my own teenagers when they aren’t too salty to have a conversation.  Getting a new iphone 6?  Hype!  The way I put on mascara and eyeliner?  Ratchet (not a compliment).  Jon Upleger, principal dancer at Nashville Ballet – bae.  But it is highly inappropriate for me to call him that.  I can only call my husband bae, or people might talk.

You could read John Green’s Paper Towns (or go to the movie, which opened last weekend) just to hear the kids talk.  The dialogue between main character Quentin and his goofy friend Ben and super-smart friend Radar is worth the price of admission – book or movie.  On trying to get a date for prom:

“So anyway,” Ben continued, “my two remaining strategies are either to purchase a prom date on the Internet or fly to Missouri and kidnap some nice corn-fed little honeybunny.”  I’d tried telling Ben that “honeybunny” sounded more sexist and lame than retro-cool, but he refused to abandon the practice.  He called his own mother a honeybunny.  There was no fixing him.

“I’ll ask Angela if she knows anybody,” Radar said.  “Although getting you a date to prom will be harder than turning lead into gold.”

“Getting you a date to prom is so hard that the hypothetical idea itself is actually used to cut diamonds,” I added.

Radar tapped a locker twice with his fist to express his approval, and then came back with another.  “Ben, getting you a date to prom is so hard that the American government believes the problem cannot be solved with diplomacy, but will instead require force.”

I was trying to think of another one when we all three simultaneously saw the human-shaped container of anabolic steroids know as Chuck Parson walking toward us with some intent.”

Ben, Radar, and Quentin quip their way through the book, but Paper Towns is first and foremost the story of Quentin and his heart’s true love, the inimitable Margo Roth Spiegelman.  Quentin’s not even cool enough to be a band geek, while Margo Roth Spiegelman rules the school with her wits, brains, and looks.  The kids have history, though:  Margo’s family moved in next door to Quentin’s when they were young, and Margo and “Q” grew up together.  Margo has pulled a series of extravagant pranks in high school, sometimes disappearing from home for a few days in the process, but Quentin thinks this time is different.  When she disappears and doesn’t come back, he and his friends search for clues and set out on a cross-country journey to find her.

Early on, you realize that Margo may be leading Q to a gruesome discovery.  Margo has left a copy of Walt Whitman’s “Song of Myself” with this underlined:

I bequeath myself to the dirt to grow from the grass I love,
If you want me again look for me under your bootsoles.

You will hardly know who I am or what I mean,
But I shall be good health to you nevertheless,
And filter and fibre your blood.

Failing to fetch me at first keep encouraged,
Missing me one place search another,
I stop some where waiting for you.

John Green keeps you guessing until the very end.

I was surprised by the extent to which this book considered very deeply one of the biggest questions we all face, not just as teenagers:  how well do we truly know those around us?  To what extent do we fail to imagine the internal experience of others?  Can we ever do better?

The consensus in my house was that the ending was unsatisfying, but this wasn’t because it was the wrong ending.  It just happened all at once, and then the book was over.  The ending took me back to high school English class.  I can picture Mrs. Conner drawing a mountain on the blackboard to illustrate how a good book or play is structured:  buildup, climax, denouement.  Green’s book basically ended at the climax.  Though my teen readers certainly didn’t talk about it in those terms, that’s what they were complaining about.  The book ended too abruptly.

Is this a deal-killer?  No.  Paper Towns won the Edgar Award for Best Young Adult Mystery in 2009 and spent time on the bestseller charts of the New York Times, USA Today, and Publishers’ Weekly.  The movie’s supposed to be hype.