You know a book is good when you don’t put it down during an 8-hour flight.

Today’s post features that novel plus 2 others that are hot off the press and promise to be thrilling reads for the steamy days ahead.

First and foremost – and I’m sure this is breaking news to no one – the script of “Harry Potter and The Cursed Child” is being released for sale in stores at midnight tonight!  (I’ll be dropping everything to read it after I pick up my copy – tomorrow.) 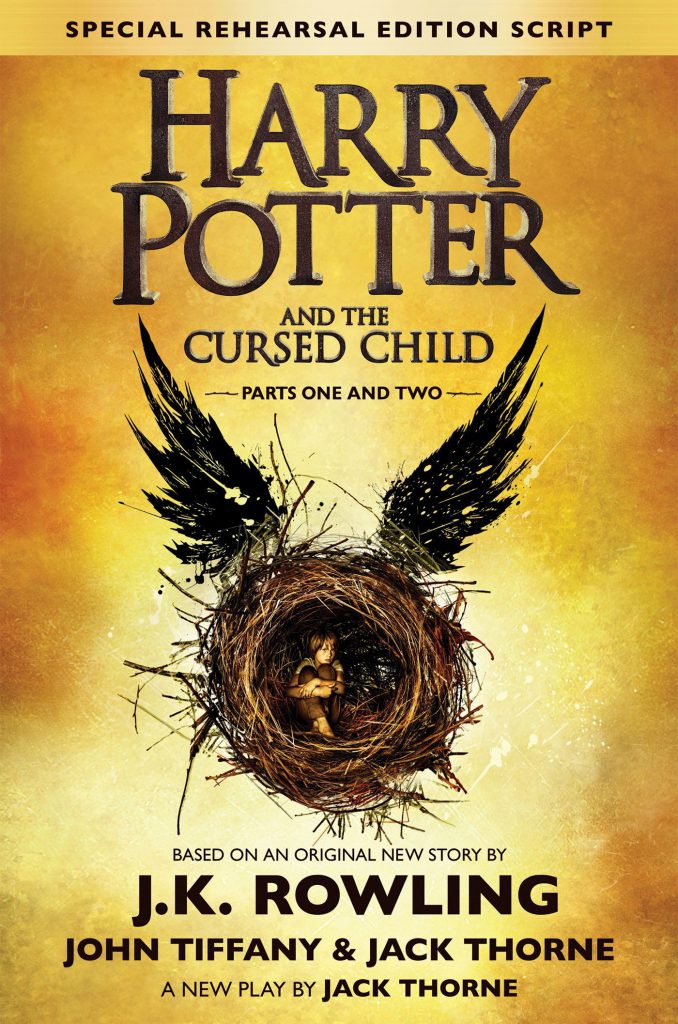 I’m terribly curious to revisit these beloved characters, all grown up.  But how will it feel to read about them in a script, not a novel?  I’m intrigued.  Here’s a photo from London’s West End Theater, where the show opens tonight: 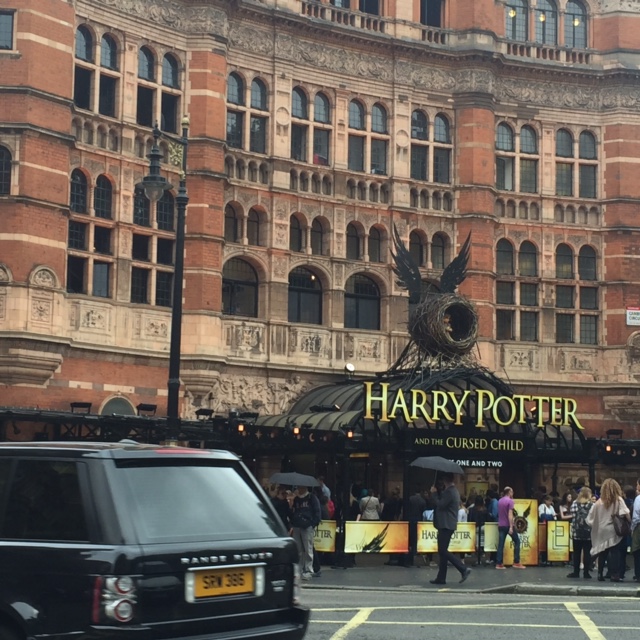 My younger daughter and I were in London this past week, dreaming of attending the show.  We ate lunch across the street from the theater, staring longingly, after our Harry Potter Studio Tour and before our Muggle Walking tour.

Here’s the summary from Amazon:

It was always difficult being Harry Potter and it isn’t much easier now that he is an overworked employee of the Ministry of Magic, a husband and father of three school-age children.

While Harry grapples with a past that refuses to stay where it belongs, his youngest son Albus must struggle with the weight of a family legacy he never wanted. As past and present fuse ominously, both father and son learn the uncomfortable truth: sometimes, darkness comes from unexpected places.

Darkness isn’t always a surprise.  I’m looking forward to an artful darkness in Eileen, by Ottessa Moshfegh, announced this week as one of the books on the Longlist for the Man Booker Prize.  One of my favorite bloggers across the Pond at A Little Blog of Books recommended it, and she’s a trustworthy guide. 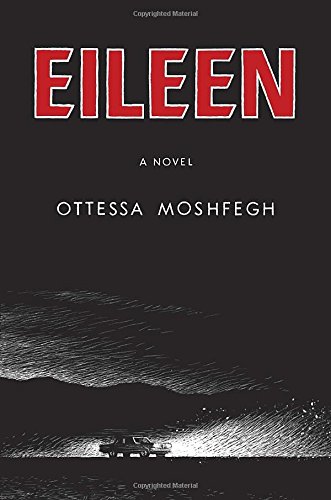 Here’s the summary from Amazon:

A lonely young woman working in a boys’ prison outside Boston in the early 60s is pulled into a very strange crime, in a mordant, harrowing story of obsession and suspense, by one of the brightest new voices in fiction

So here we are. My name was Eileen Dunlop. Now you know me. I was twenty-four years old then, and had a job that paid fifty-seven dollars a week as a kind of secretary at a private juvenile correctional facility for teenage boys. I think of it now as what it really was for all intents and purposes—a prison for boys. I will call it Moorehead. Delvin Moorehead was a terrible landlord I had years later, and so to use his name for such a place feels appropriate. In a week, I would run away from home and never go back.

This is the story of how I disappeared.

The Christmas season offers little cheer for Eileen Dunlop, an unassuming yet disturbed young woman trapped between her role as her alcoholic father’s caretaker in a home whose squalor is the talk of the neighborhood and a day job as a secretary at the boys’ prison, filled with its own quotidian horrors. Consumed by resentment and self-loathing, Eileen tempers her dreary days with perverse fantasies and dreams of escaping to the big city. In the meantime, she fills her nights and weekends with shoplifting, stalking a buff prison guard named Randy, and cleaning up her increasingly deranged father’s messes. When the bright, beautiful, and cheery Rebecca Saint John arrives on the scene as the new counselor at Moorehead, Eileen is enchanted and proves unable to resist what appears at first to be a miraculously budding friendship. In a Hitchcockian twist, her affection for Rebecca ultimately pulls her into complicity in a crime that surpasses her wildest imaginings.

The book that surpassed my wildest imaginings – the book I didn’t put down for 8 hours on the plane – is Joe Hill’s The Fireman. 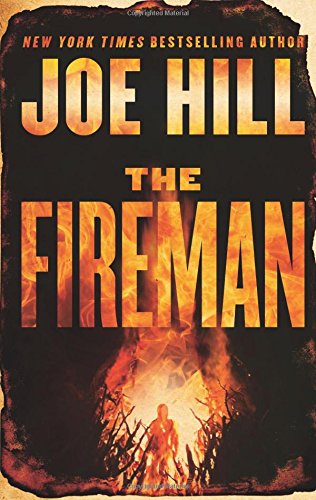 Maybe you’ve heard of Joe Hill, New York Times bestselling author of NOS4A2 and Heart-Shaped Box.  I had not.  He doesn’t write the kind of literary fiction I generally gravitate to.  I downloaded it right before the flight based on a smart friend’s recommendation and wanting something that was suspenseful and not too demanding for the long flight home.  I got more than I expected!  I only learned after I’d read the book that Joe Hill is the son of Stephen King.

No one knows exactly when it began or where it originated. A terrifying new plague is spreading like wildfire across the country, striking cities one by one: Boston, Detroit, Seattle. The doctors call it Draco Incendia Trychophyton. To everyone else it’s Dragonscale, a highly contagious, deadly spore that marks its hosts with beautiful black and gold marks across their bodies—before causing them to burst into flames. Millions are infected; blazes erupt everywhere. There is no antidote. No one is safe.

Harper Grayson, a compassionate, dedicated nurse as pragmatic as Mary Poppins, treated hundreds of infected patients before her hospital burned to the ground. Now she’s discovered the telltale gold-flecked marks on her skin. When the outbreak first began, she and her husband, Jakob, had made a pact: they would take matters into their own hands if they became infected. To Jakob’s dismay, Harper wants to live—at least until the fetus she is carrying comes to term. At the hospital, she witnessed infected mothers give birth to healthy babies and believes hers will be fine too. . . if she can live long enough to deliver the child.

Convinced that his do-gooding wife has made him sick, Jakob becomes unhinged, and eventually abandons her as their placid New England community collapses in terror. The chaos gives rise to ruthless Cremation Squads—armed, self-appointed posses roaming the streets and woods to exterminate those who they believe carry the spore. But Harper isn’t as alone as she fears: a mysterious and compelling stranger she briefly met at the hospital, a man in a dirty yellow fire fighter’s jacket, carrying a hooked iron bar, straddles the abyss between insanity and death. Known as The Fireman, he strolls the ruins of New Hampshire, a madman afflicted with Dragonscale who has learned to control the fire within himself, using it as a shield to protect the hunted . . . and as a weapon to avenge the wronged.

In the desperate season to come, as the world burns out of control, Harper must learn the Fireman’s secrets before her life—and that of her unborn child—goes up in smoke.

What I would add to this:  Reading The Fireman, I felt like a very young kid all over again, watching my favorite cartoon – Scooby Doo.  I lost myself utterly in Scooby Doo, absorbed in the adventure and the relationships between the characters.  I was often frightened, but only in the most delicious kind of way.  And the adventures just kept on happening (ruh-roh), to an amazing ensemble cast!  I mean this comparison as the highest possible praise.  The Fireman is nearly 800 pages of gripping suspense, with an incredible ensemble cast, and I passed 8 hours entertained and transported.  (Thank God – given that my noise-blocking headphones only partially muffled the sounds of the 2 year old directly in front of me who was loudly unhappy almost the entire flight.)

In other news:  will the kind friend who left her copy of Eligible by Curtis Sittenfeld in my mailbox please identify herself?  I’ve talked about this book to quite a few friends and am not sure who might have been dear enough to leave it for me to enjoy! xo