And now – we exhale.

It seems the perfect moment to check in with Mary Raymond, in between one place and another herself. She moved not too long ago and has been figuring out furniture, paint, the rest. Her bookshelves.

“What got you thinking about your ideal bookshelf, Mary?” I asked.

“Well, Jennifer, it started, as these things do, innocently enough. I heard about Jane Mount’s book Bibliophile in Mary Laura Philpott’s weekly email, and I thought I must have this book. 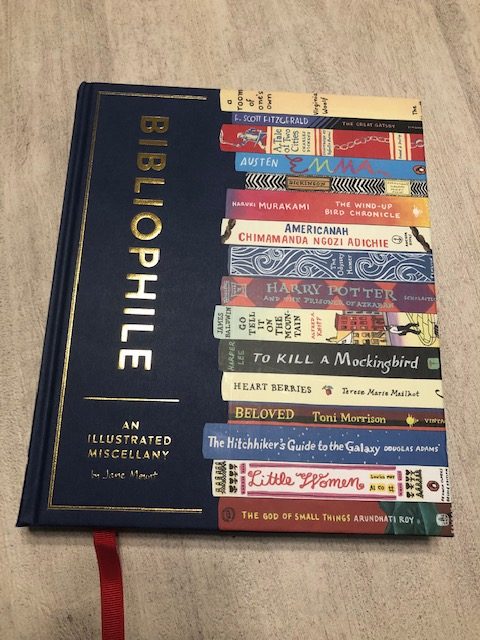 I have been a bibliophile since long before I knew the meaning of the word. My mom said when I was very young I would hold books lovingly and talk about their beautiful spines. She would drop me off at the library in Brentwood when she did her grocery shopping at the Kroger across the street. Sure we frown on this sort of negligent parenting now, but I grew up to be a hoarder of books who has never once been kidnapped so I think we can all agree it turned out fine.

Jane Mount’s book is a collection of the various beloved book spines she has drawn.  I loved her story because she had always been an artist but had never been able to support herself entirely through her art until she gave a friend a gift of an Ideal Bookshelf print, and soon she was doing brisk business as friends of friends all wanted her to paint a collection of their favorite titles.

At the start of the pandemic I was nervous about the state of the world and decided it would be best to put a hold on discretionary spending. March was a thousand lifetimes ago, and some time since I turned the corner and decided it would be perfectly sane and reasonable to order my own Ideal Bookshelf print. I’ve had good days and bad days during this time, as have we all. I’ve felt fragile in ways I cannot begin to articulate, but I have also felt moments of joy. What I am trying to tell you, Jennifer, is that the print is more than just a print: it’s me leaning into hope. 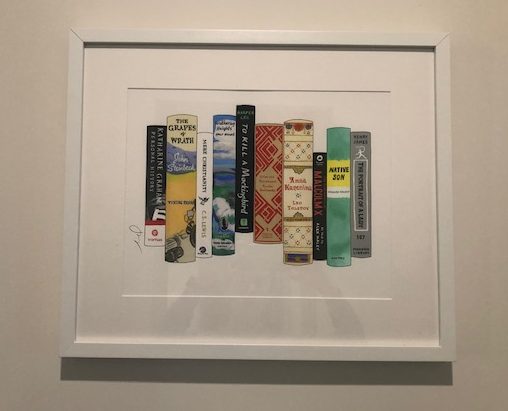 Deciding on the titles was the hardest part, and you’ll see that many are books I read when I was much younger. Isn’t this always the way? The books we read when we are young have a greater ability to shake us awake or help us see the world – and ourselves – from a new perspective? One of my favorite ways to get to know a person is to find out what books they’ve loved. I look forward to hearing about your Ideal Bookshelf – and those of other Bacon readers. 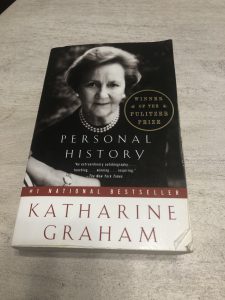 It would be worth reading Personal History to get Katharine Graham’s account of her days at the Washington Post during the Watergate era or join her as she hosted the Beltway elite at her famous soirees. But what I loved most about the book is her vulnerable, unvarnished sharing of the pain of enduring her husband’s serial cheating at a time when women felt they had no right to demand fidelity, and then her late-in-life blossoming as she discovered she loved running The Washington Post – and was quite skilled in the role. Her confidence grew with each careful forward step, and because she shares each of her false starts and inner doubts, I did not meet her as the icon she eventually became. Instead I met her as the woman of integrity who pushed against society’s limits with a mix of curiosity, trepidation, and, ultimately, confidence and delight.

The quote that stayed with me: “I had very little idea of what I was supposed to be doing, so I set out to learn. What I essentially did was to put one foot in front of the other, shut my eyes, and step off the edge.”

Somehow both of these things are true: I don’t generally enjoy John Steinbeck, and I think perhaps The Grapes of Wrath is the Great American Novel. What a devastating account of how close the working poor can come to the edge, how we all ache for the dignity of a living wage for honest work, and how our vulnerability can coexist so inextricably with our resilience.

The quote that stayed with me: “The people in flight from the terror behind – strange things happened to them, some bitterly cruel and some so beautiful the faith is refired forever.” 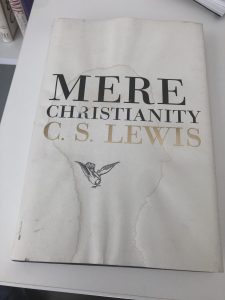 I do not remember a time before I had a relationship with God, but somehow I also keenly identify with anyone who wrestles with doubt. I think it is because C.S. Lewis lived so many years outside the camp that Mere Christianity is a masterwork of Christian apologetics. Sometimes our sense of shame, or our lack of self-awareness, keep us from freely articulating essential truths about the struggle of faith. C.S. Lewis has healed me a thousand times over by putting into words the fears, doubts, and even anger that often live side-by-side with my faith. Some Christian writers encourage believers to stifle those parts of themselves. C.S. Lewis seems to say, “These, too, are faith.”

The quote that stayed with me: “God will give us feelings of love if he pleases. We cannot create them for ourselves, and we must not demand them as a right. But the great thing to remember is that, though our feelings come and go, his love for us does not. It is not wearied by our sins – or our indifference. And therefore, it is quite relentless in its determination that we shall be cured of those sins, at whatever cost to us, at whatever cost to him.” 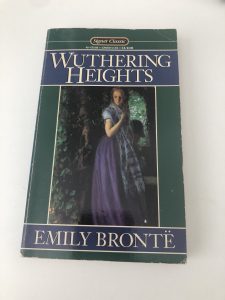 I read Emily Bronte’s Wuthering Heights over a snowy weekend my senior year of high school. I had largely avoided the classics up to that point. My general sense was that the women of the classics were weak and silly, always fainting in their corsets and casting about for smelling salts and a marriageable man. Then I met Catherine Earnshaw. Listen, she and Heathcliff are lunatics. But what teenager doesn’t relate to the fever dream of their love and hatred, their madness and despair? No corset could contain Catherine in all of her selfish, fiery complexity, and Wuthering Heights became my gateway drug to classic literature.

The quote that stayed with me: “So Heathcliff shall never know how much I love him; and that not because he’s handsome, but because he’s more myself than I am.  Whatever our souls are made of, his and mine are the same; and Linton’s is as different as a moonbeam from lightning, or frost from fire.” 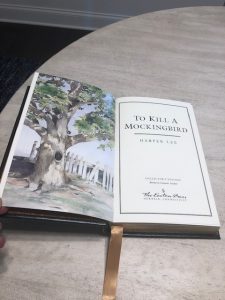 I figure if you are ordering a 10 book Ideal Bookshelf, you really only have to think of 9 other titles because who doesn’t include To Kill a Mockingbird? I was a Southern, 12-year-old tomboy with an older brother the first time I read this book, and I instantly identified with Scout Finch. Her righteous indignation, endless curiosity, and penchant for fisticuffs: I understood her entirely. Harper Lee instinctively knew that she could shine the brightest light on heartbreaking injustice if she framed it through the eyes of a child.

The quote that stayed with me: “You told me never to use words like that except in ex-extreme provocation, and Francis provocated me enough to knock his block off.” 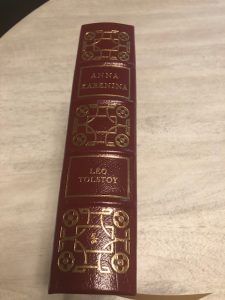 Leo Tolstoy’s Anna Karenina might be my favorite book. So much of the joy of reading is exploring new worlds, and it was thrilling to join Anna at glamorous parties where the guests dressed in sumptuous finery and conducted existential conversations in French. Tolstoy is unrelenting in showing the far-reaching impact of her affair with Count Vronsky, but he never condescends to Anna or becomes overly didactical. There is an intimacy to the novel even as Tolstoy explores themes of faith, love, family, loyalty, politics, indeed life itself, as only he can.

The quote that stayed with me:  “All the variety, all the charm, all the beauty of life are made up of light and shade.” 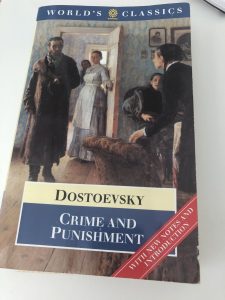 Fyodor Dostoyevsky’s Crime and Punishment must have been a tough sell for the publishers. The book is essentially one long inner monologue as Raskolnikov wrestles with his conscience and the yawning gap between his grand self-delusions and the evil of his own actions. Dostoyevsky excavates layer after layer of the human condition in extremis, and I could no more stop reading the book than I could stop thinking about it once I was finished.

The quote that stayed with me: “Reason is passion’s slave.” 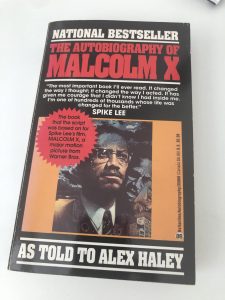 I read The Autobiography of Malcolm X when I was 16 – just before the Denzel Washington movie came out. Malcolm X lived several lifetimes, and the arc of his life is a testament to the redemptive power of faith and education. His book bridged a gap for me that I did not yet know existed and helped me approximate what it felt like to be Black in America. Thank goodness for the work of Martin Luther King and John Lewis and other leaders of the nonviolent resistance movement. But thank goodness, too, for Malcolm X who freely offered Black people access to the full gamut of human emotion, including anger.

The quote that stayed with me:  “My alma mater was books, a good library… I could spend the rest of my life reading, just satisfying my curiosity.” 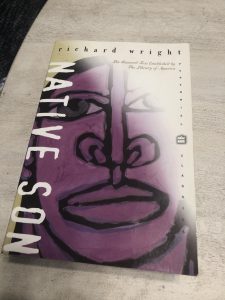 Reading Richard Wright’s Native Son is both exhausting and exhilarating. Bigger Thomas, an antihero if there ever was one, races toward his fate after he murders two white women. His native Chicago erupts in riots as the trial proceeds, and it feels as though the whole world has descended into madness. Bigger’s attorney’s final plea to the jury is so impassioned, so searing, that I kept hoping somehow Bigger would go free. It was only much later that I understood Wright was never trying to convince anyone of Bigger’s innocence. His intention all along was to force his fellow Americans to stare clear-eyed at their own culpability.

The quote that stayed with me: “You asked me questions nobody ever asked me before. You knew that I was a murderer two times over, but you treated me like a man.” 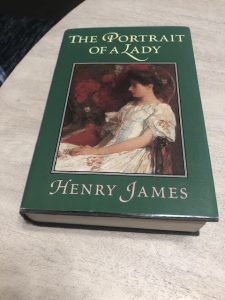 Reading William James’s A Portrait of a Lady felt like I was reading my own diary – if I could have put my own thoughts at 22 into such beautiful words. I rooted for Isabel Archer’s right to choose her own partner and understood how she sometimes doubted her choices even as she fervently believed she deserved agency. Many times the most comforting thing about reading is how it makes us feel less alone in the world. This book, as much as any other, provided that comfort to me.

The quote that stayed with me: “I always want to know the things one shouldn’t do,” said Isabel Archer.

“So as to do them?” asked Isabel’s aunt. 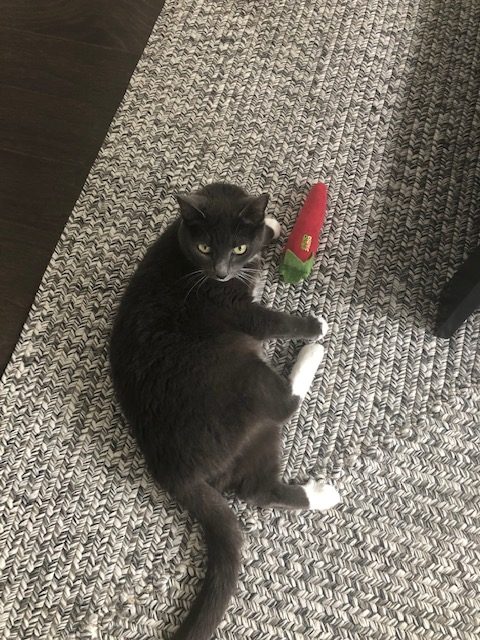