When God, the universe, and a small puppy knock you off your feet so completely that you break both ankles, it feels kind-of personal. In an Old Testament kind of way.

An invisible match still burns the toes on my left foot. Super grateful it’s not a blow torch any more! I’m motivated to learn what I should.

I’ve been thinking about habits of mind, spirit, and body. I’m ruminating on right relationship with God and fellow man, taking a good hard look at the ways I fail and have failed. OUCH! DARN! UGH.

Living the sofa life has some easier, gentler moments, too. Here are some scenes from the last two weeks plus a Bacon on the Sofa book recommendation…

In the morning I sit at the “daytime” end of the sofa because the view is better here. Pepper and Daisy and I spend a lot of time looking out the window. 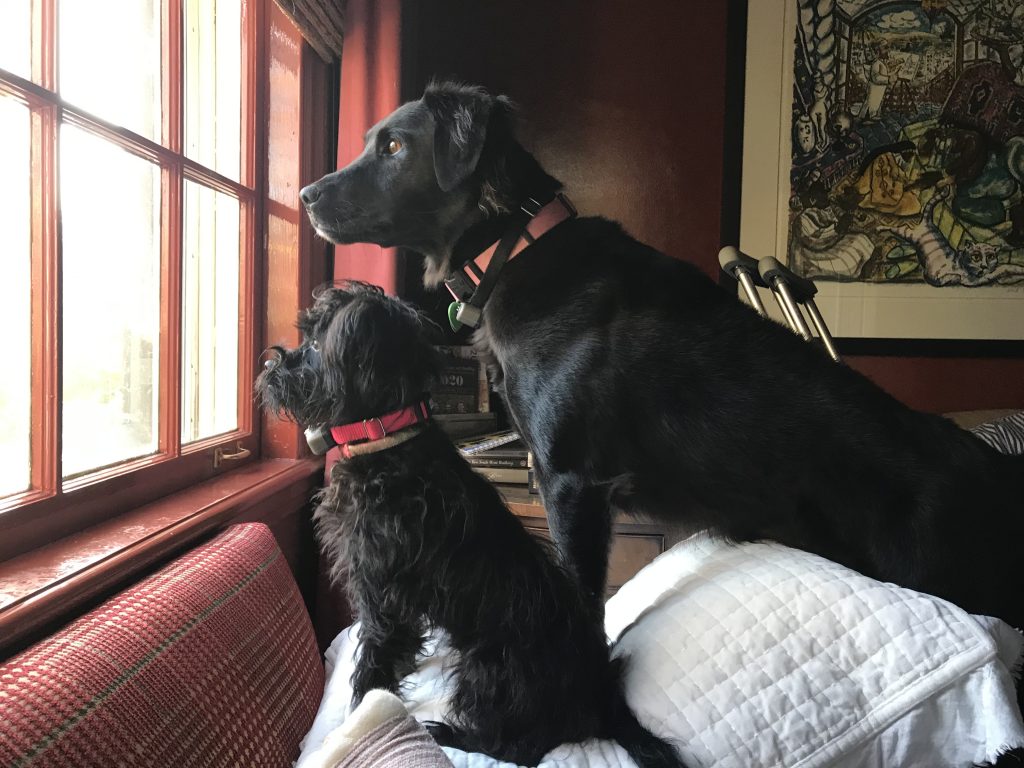 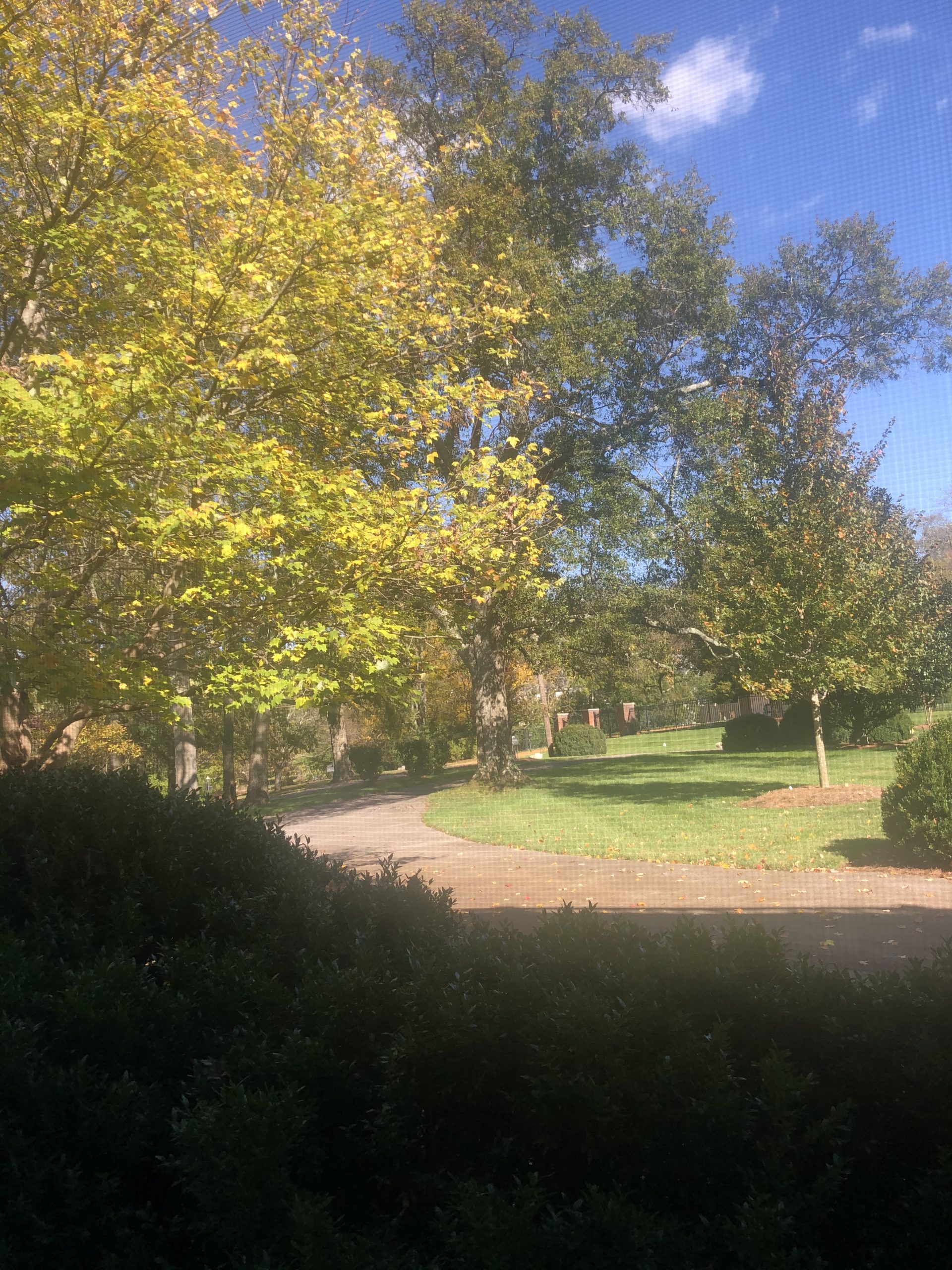 next the Autumn Blaze caught fire; 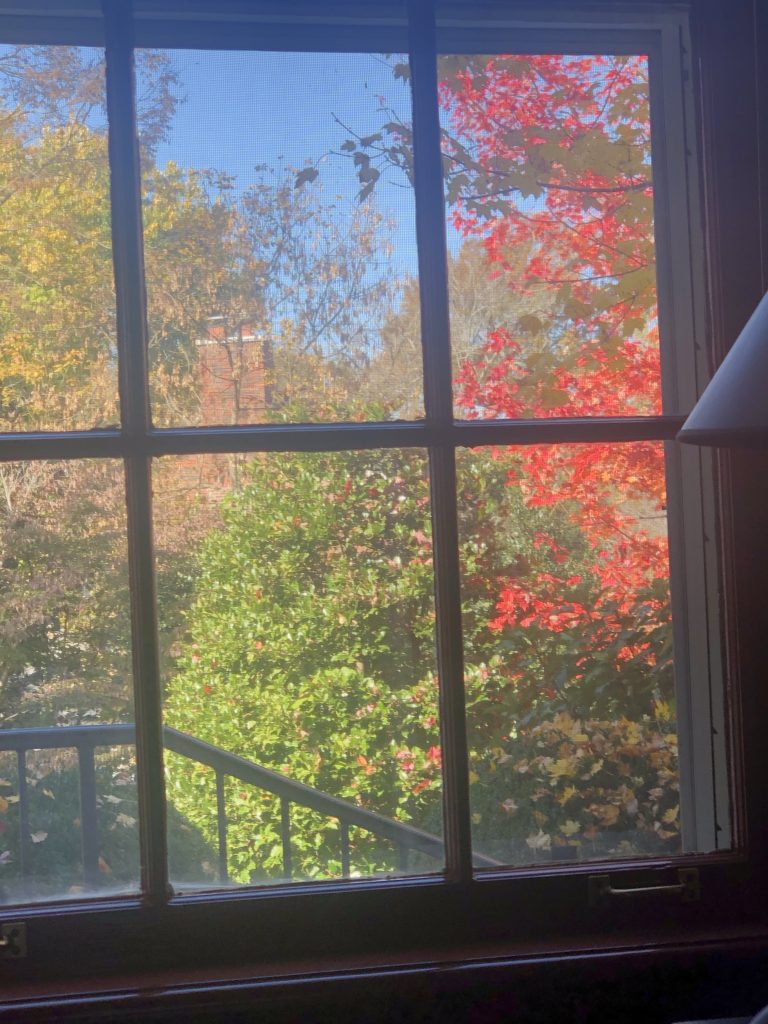 and October Glory runs the final lap for the front yard maples. 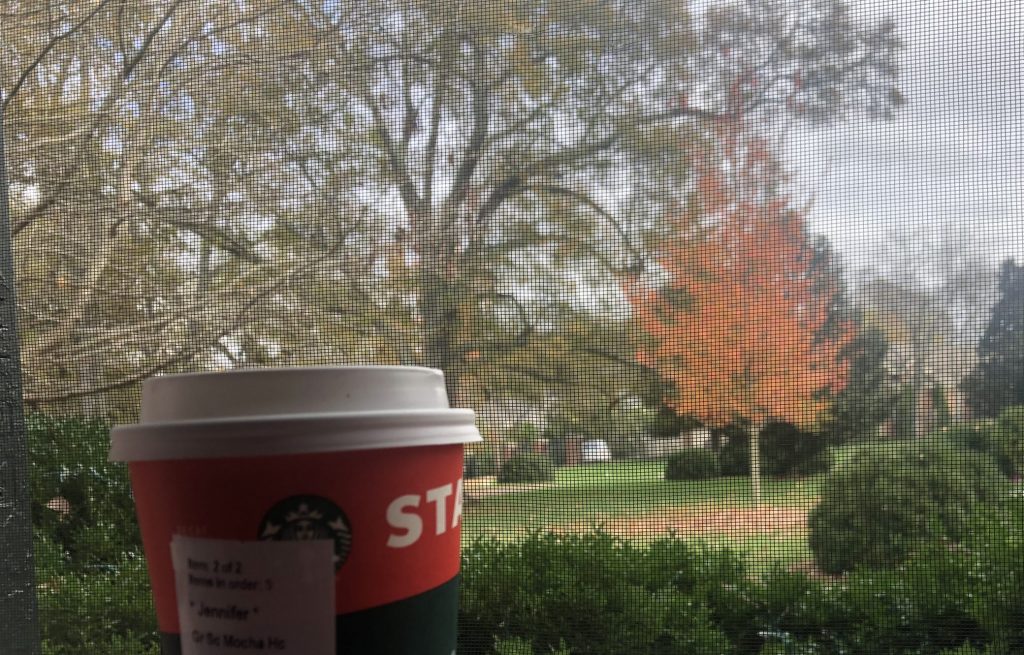 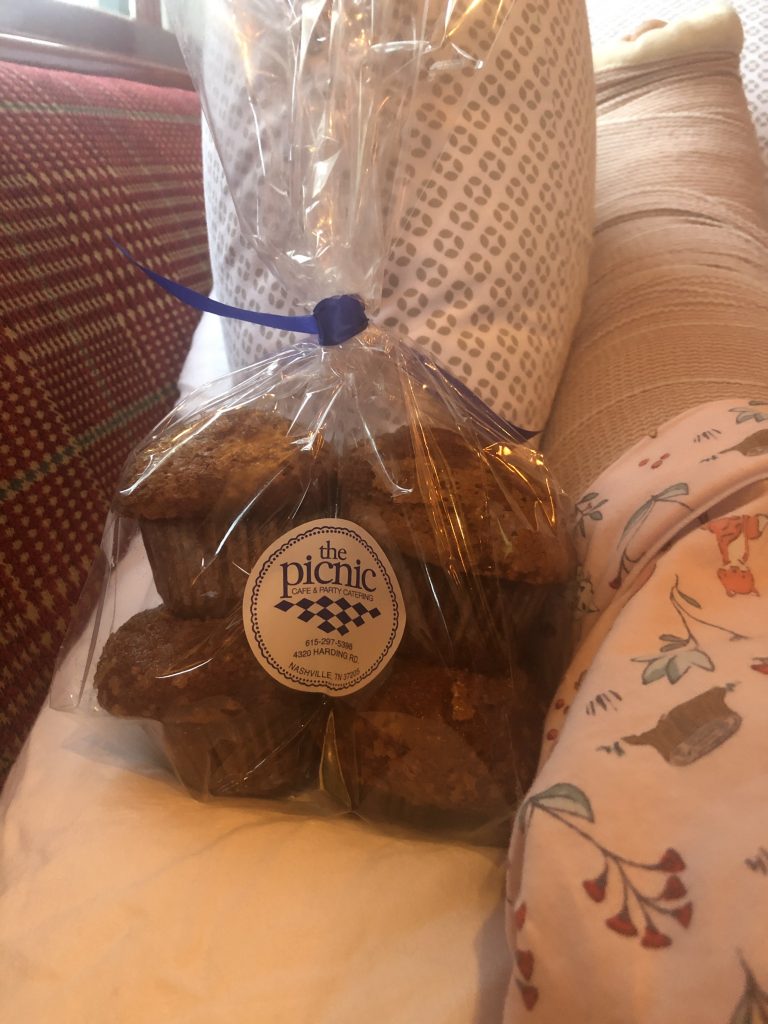 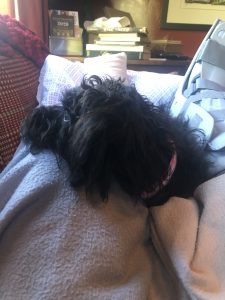 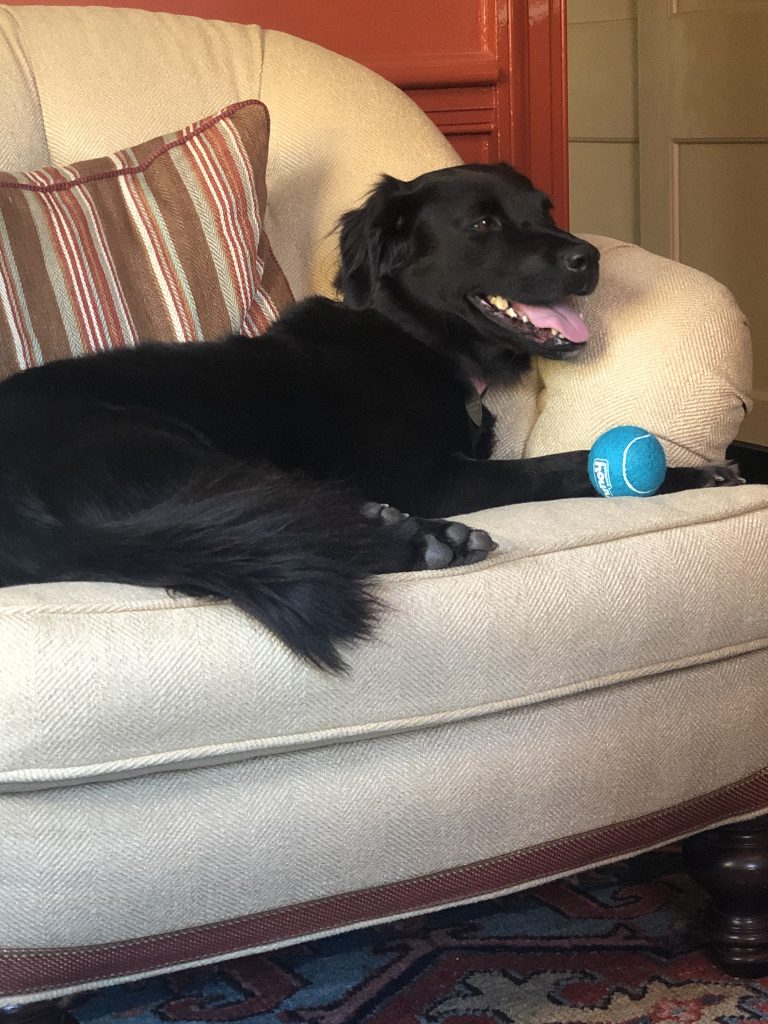 Food arrives, and friends; flowers; kind messages; I see that perhaps I am both likeable and lovable. I want to be the best version of myself. My friends help remind me who that is.

My husband takes good care of me, the house, and the dogs, and I think: we are on this unchosen journey together. I wonder: where will it take us?

In the night, unasleep, I see strange shadows. 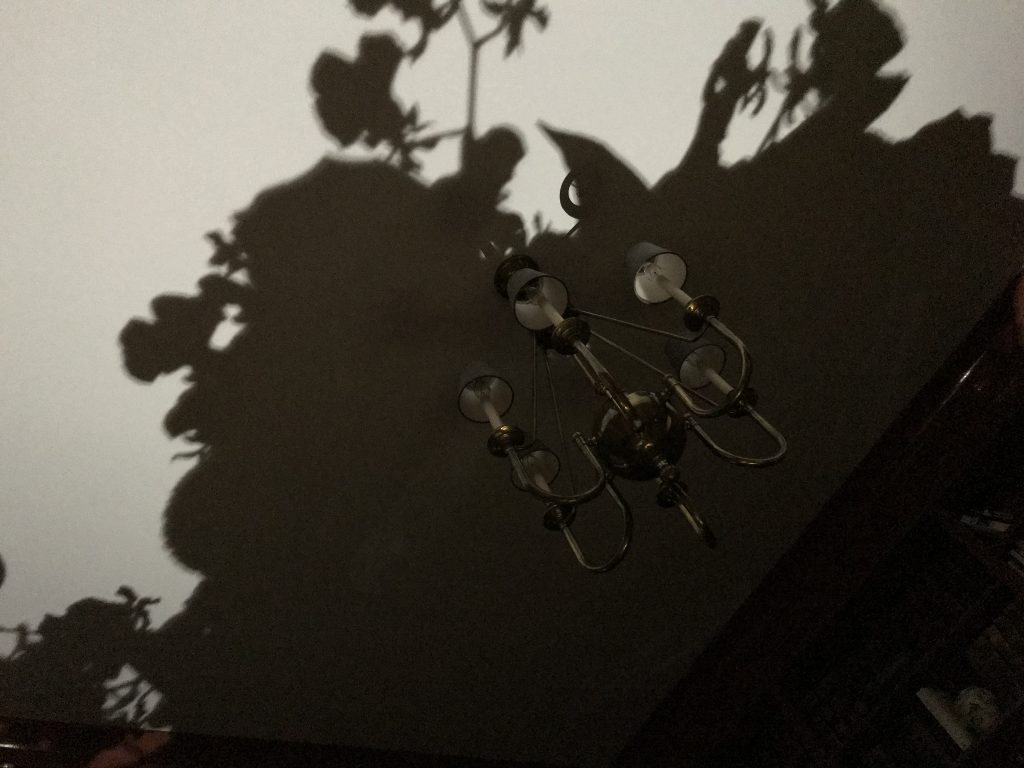 I am broken and also healing. 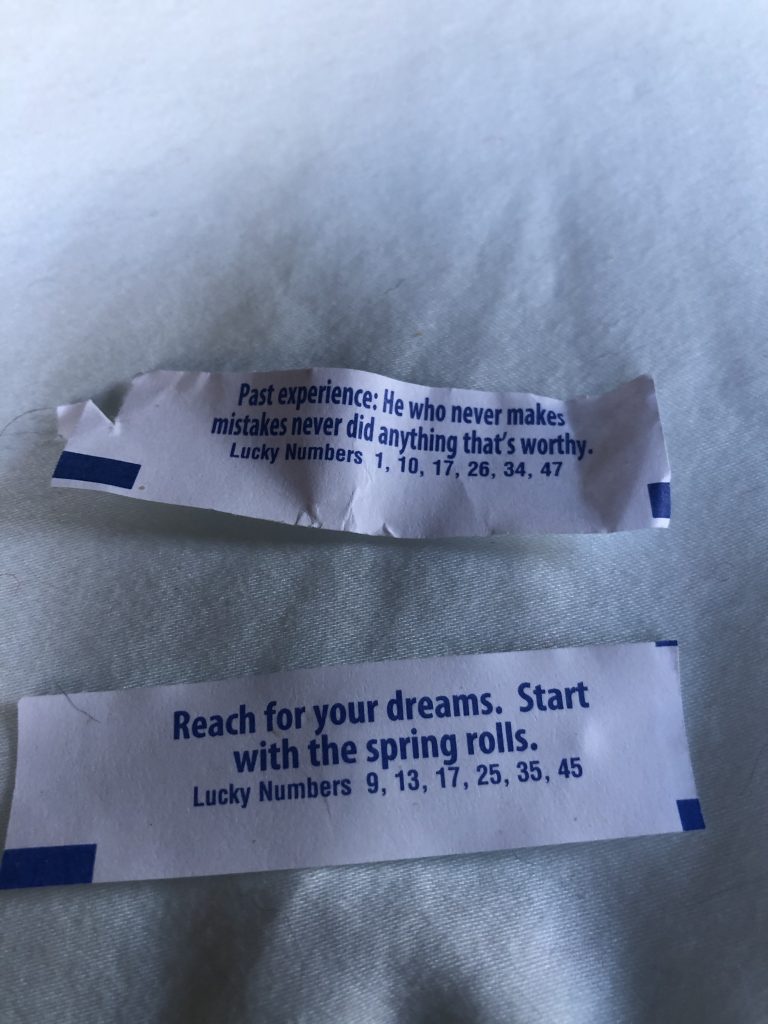 (Recent messages from the universe via Pei Wei) 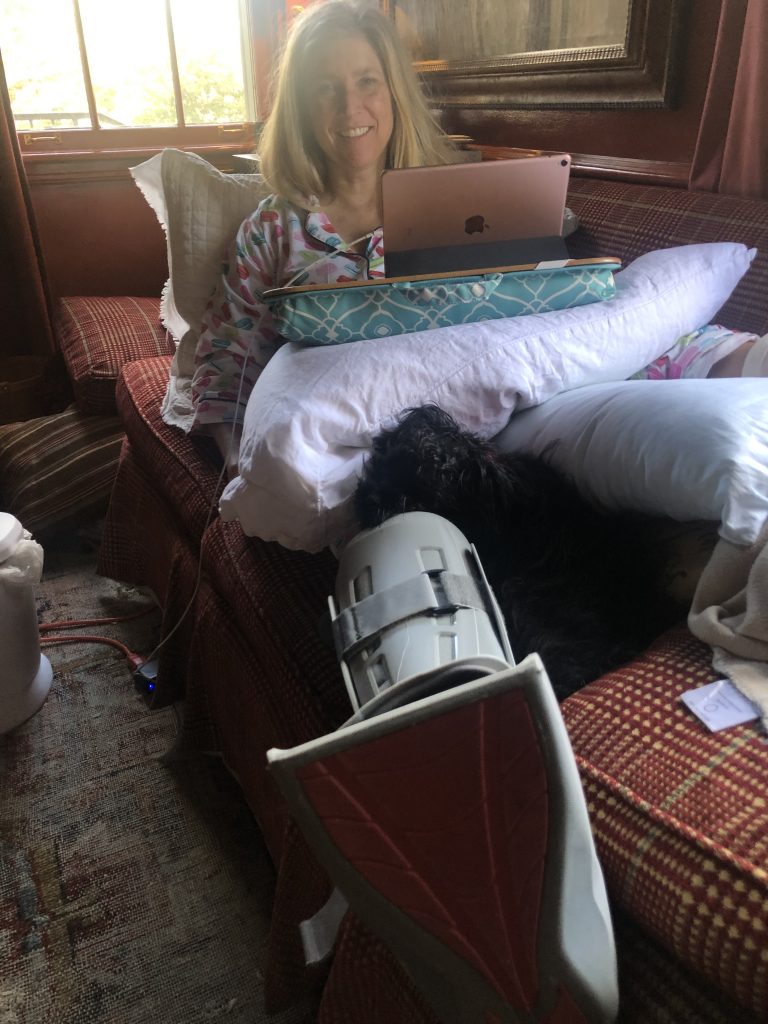 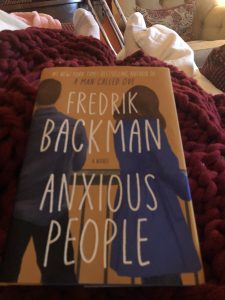 From the #1 New York Times bestselling author of A Man Called Ove comes a charming, poignant novel about a crime that never took place, a would-be bank robber who disappears into thin air, and eight extremely anxious strangers who find they have more in common than they ever imagined.

Looking at real estate isn’t usually a life-or-death situation, but an apartment open house becomes just that when a failed bank robber bursts in and takes a group of strangers hostage. The captives include a recently retired couple who relentlessly hunt down fixer-uppers to avoid the painful truth that they can’t fix their own marriage. There’s a wealthy bank director who has been too busy to care about anyone else and a young couple who are about to have their first child but can’t seem to agree on anything, from where they want to live to how they met in the first place. Add to the mix an eighty-seven-year-old woman who has lived long enough not to be afraid of someone waving a gun in her face, a flustered but still-ready-to-make-a-deal real estate agent, and a mystery man who has locked himself in the apartment’s only bathroom, and you’ve got the worst group of hostages in the world.

Each of them carries a lifetime of grievances, hurts, secrets, and passions that are ready to boil over. None of them is entirely who they appear to be. And all of them—the bank robber included—desperately crave some sort of rescue. As the authorities and the media surround the premises these reluctant allies will reveal surprising truths about themselves and set in motion a chain of events so unexpected that even they can hardly explain what happens next.

Rich with Fredrik Backman’s “pitch-perfect dialogue and an unparalleled understanding of human nature” (Shelf Awareness), Anxious People is an ingeniously constructed story about the enduring power of friendship, forgiveness, and hope—the things that save us, even in the most anxious times.

A few other descriptions:

“Backman again captures the messy essence of being human… It’s clever and affecting, as likely to make you laugh out loud as it is to make you cry.” —Washington Post

“This book examines how a shared event can change the course of many lives at once. And if you like strongly drawn characters and a mix of humor and heartbreak, this one’s for you.” –The Skimm