My friend Mary Jo Shankle has found her way – perhaps her calling – during the pandemic.

Here’s what she has to say.

Thank you for spending some time in the Bacon Neighborhood today, Mary Jo! It’s a beautiful day in the neighborhood because you’re here. 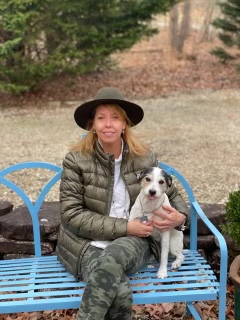 Let’s start at Monteagle – an hour away, as the car drives – and yet also a world away. Any wonderful hikes lately?

During a recent week on the Mountain, we rambled around in the South Cumberland Recreation Area… Foster Falls, Fiery Gizzard, Denny Cove… and some of the University’s Perimeter Trail including Otey Point down to Bridal Veil Falls. One foggy, rainy day we squelched through the University cemetery visiting famous inhabitants and beloved dead professors, an activity which invariably leaves me broody. 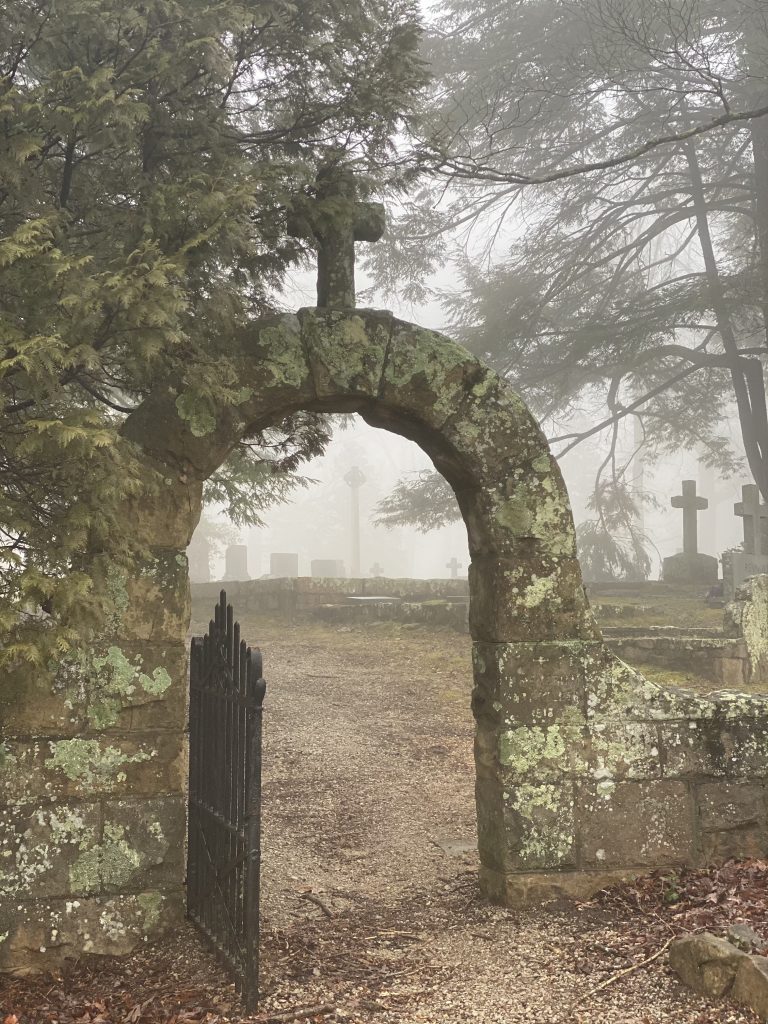 This winter in particular I have noticed the light. Winter light is scant (and slant) so I seek it more, crave it more, cling to it more. The glow of a fireplace, the cozy hygge of twinkle lights on the mantle long after Christmas, the spark and sputter of candle flame… 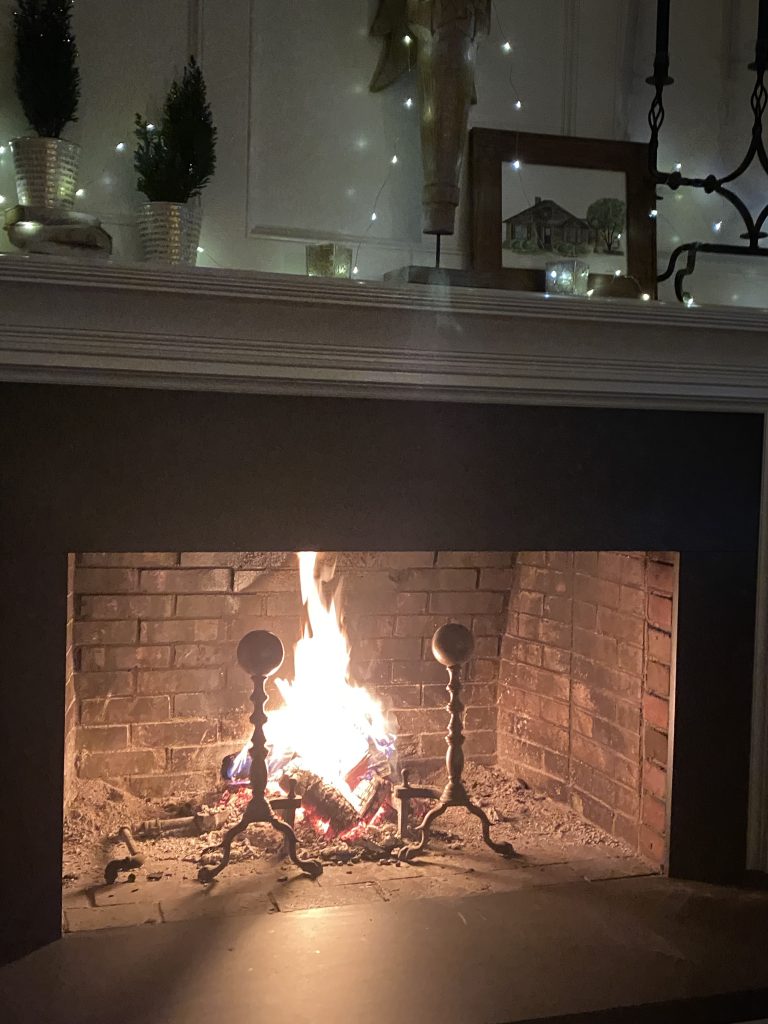 …and of course, the “sudden flaring sky” of sunsets. Others have described it better than I, as a “throbbing heart”, “the weakening eye of day”, and “a horizon that bleeds and sucks its thumb”. 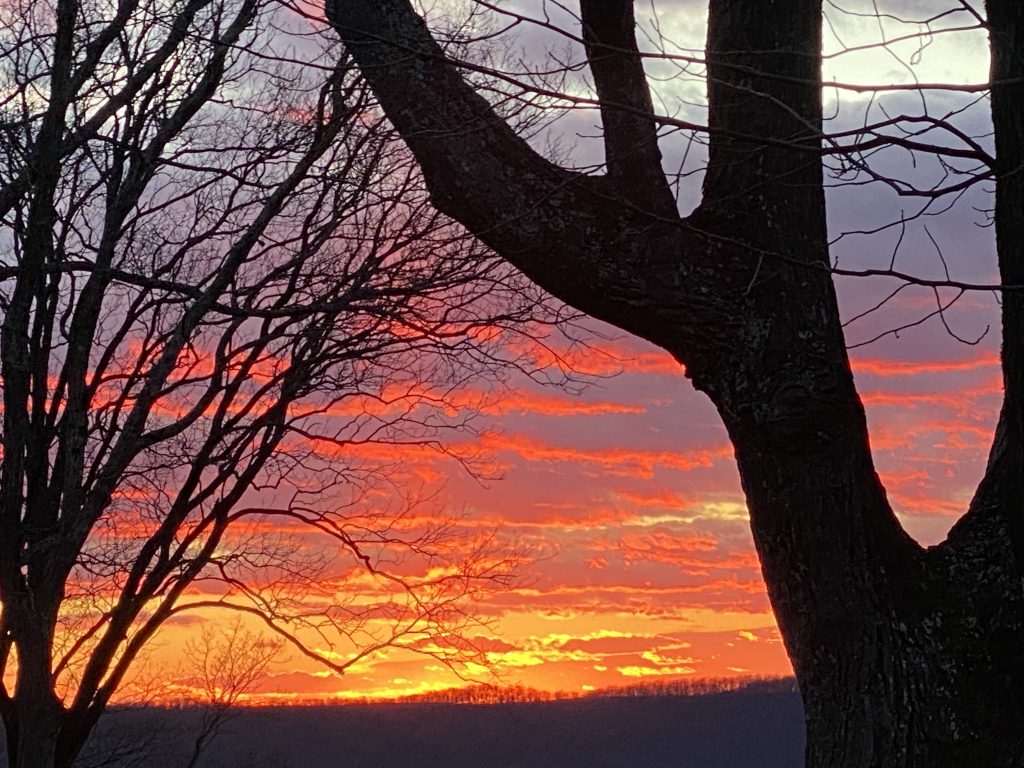 What is your state of mind right now?

Fluctuation-forward and anxiety-adjacent. (I will aim for brevity, which you know is not my forte. My verbosity and periphrasis is topped only by my affection for the parenthetical aside.) Routine bloodwork in July revealed hubs and I were antibody positive (that’s the good news). We recalled that five months prior Steve was in and out of bed for a week (damn malingerer) with what we thought was his annual winter cold (man-fluenza). Around the same time I had 4 or 5 days of complete loss of smell. I remember Googling “anosmia” and the top hit was “Early Onset Alzheimer’s” (that’s the bad news). No mention of Covid 19 at all. Looking back to the July bloodwork I felt, “Whew, it was only Covid!” (that’s the good news??).

Even more essential to my state of mind than Covid is Yoga. Last August I began a six-month, 200-hour Yoga Teacher Training (YTT) at NuPower Yoga and Barre on 8th Avenue. It has been a completely immersive and transformative experience (that’s the good news). We meet every third weekend, all weekend long. Shortly after our first session I had unexpected and unavoidable rotator cuff surgery for a torn supraspinatus (that’s the bad news). The recovery is long and I have a few more months of PT ahead of me.

YTT has reinforced what many already know, that Every Shadow has a Gift, and this surgery has been a forced reset which I undoubtedly needed. I have learned that the real work is not on the mat, but off of it. I have learned how resilient I am. I have learned the way we do one thing is the way we do everything. My sweet friends are surely weary of my proselytizing and my yogi sound bites, but they are very encouraging and kindly minimize their eye rolling.

“Every Shadow has a Gift.” This has a lot to do – I think – with keeping perspective. Staying sane in trying times. Please, tell me more…

January is over, February is short-ish, and we are on the cusp of Spring. I can feel nature quietly at work and I feel remarkable clarity and sanity. 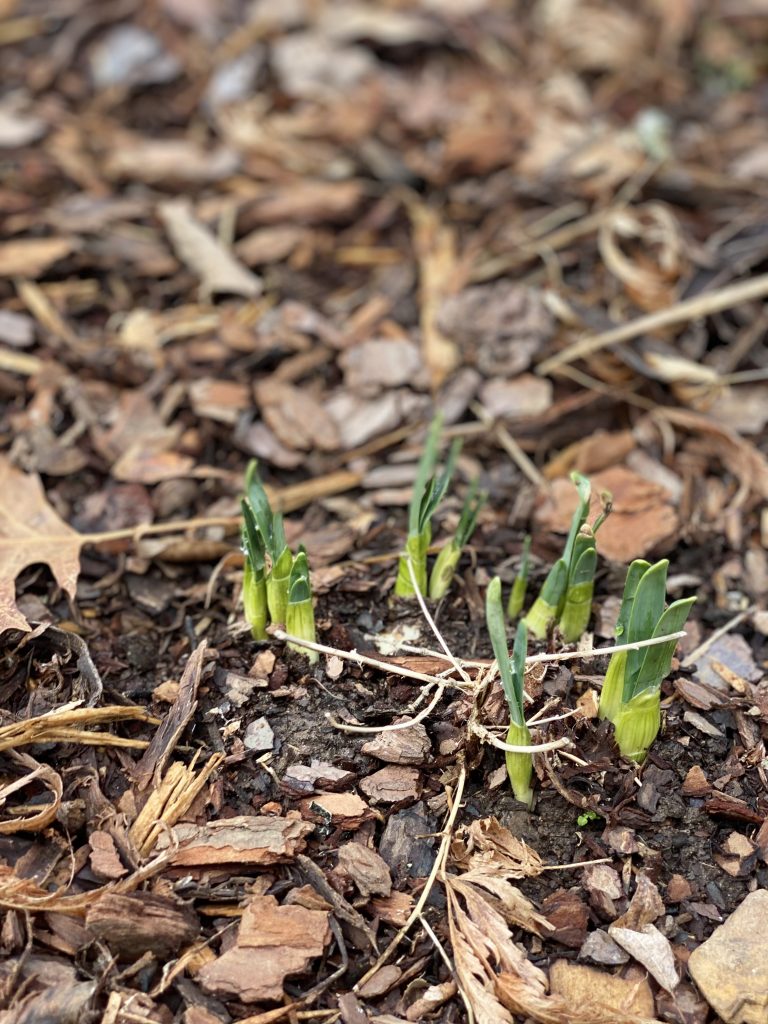 Yoga is hard work, and yoga is heart work. In our practice and teacher training we strive to be intentional in all we do. Through all the readings, the meditation, the journaling, the practice on the mat, and in the unpacking of long-held (often unrecognized, ignored, or suppressed) baggage, it is impossible to avoid the hard work. Focus on and scrutiny of these things gives one a perspective for all things. A purpose/calling/discipline/practice goes a very long way in promoting and preserving one’s sanity. I suppose it is the same with all those folks baking sourdough bread. 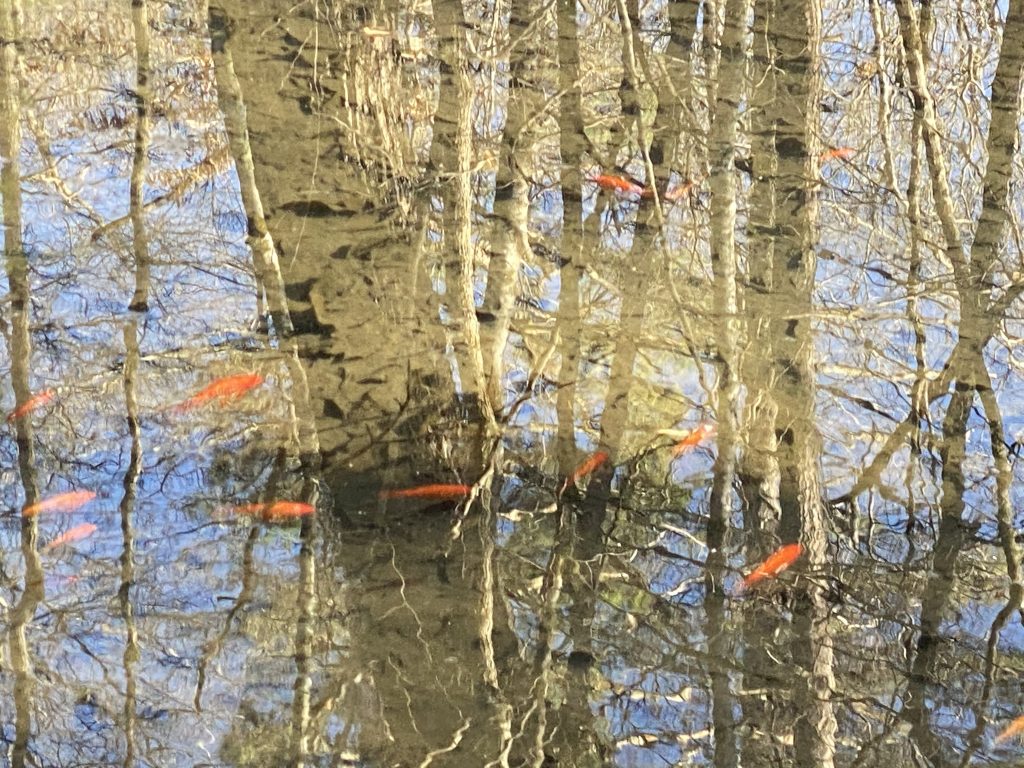 What were your favorite reads of 2020? I want to hear about these yoga books! 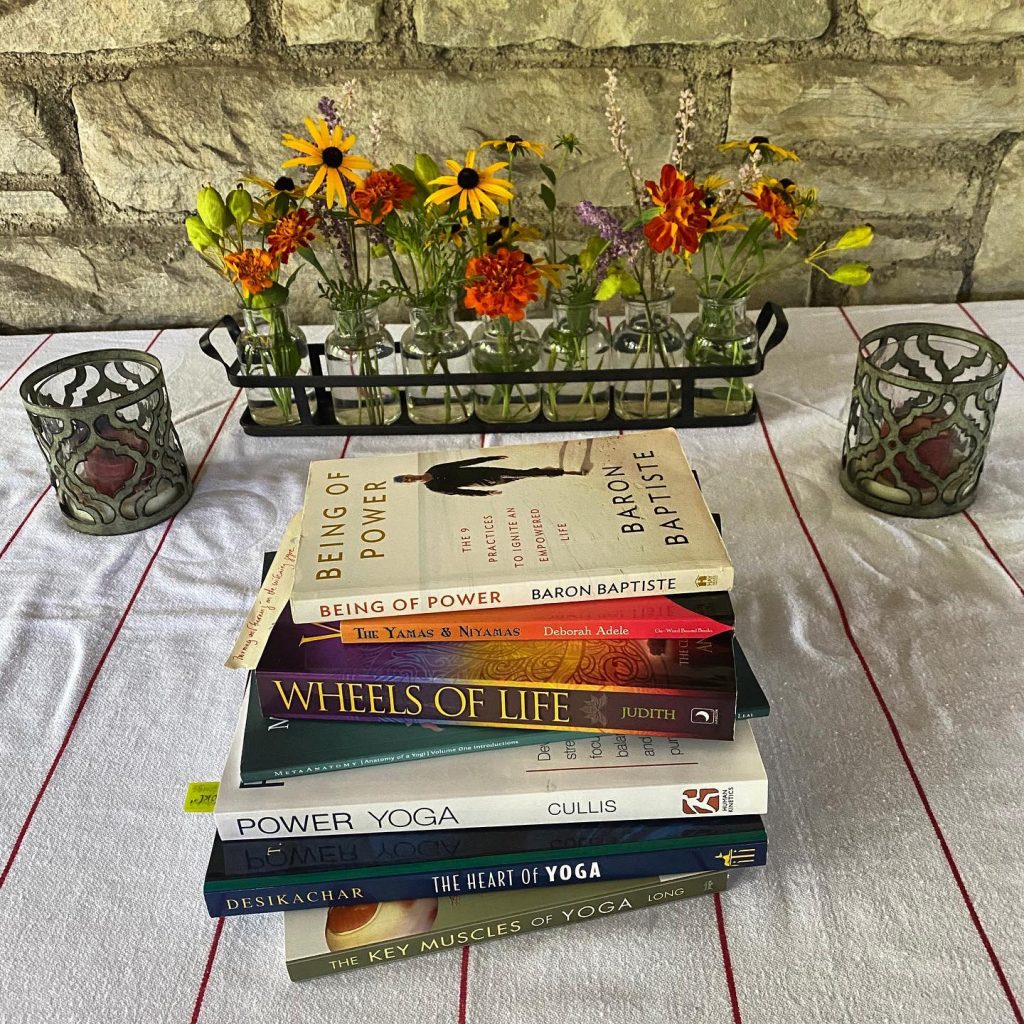 Ah yes, the yoga books. To be honest, I have read very little else. We have seven required texts which include interesting books on the history and various philosophies of yoga, physical anatomy, subtle body anatomy (the Chakras), Ayurveda, a guide to the Asanas (poses), Pranayama (breath work), and the ancient Sanskrit text of the Yoga Sūtra. One of my favorites is Deborah Adele’s The Yamas and Niyamas. The first and second limbs of yoga, the Yamas and Niyamas are ten ethical observances and guidelines which provide a foundation upon which the next six limbs of yoga build.

Equally fundamental to our particular training course is Being of Power by Baron Baptiste. It presents nine stepping-stone practices for discovery or re-discovery of one’s essential authenticity which he declares the source of one’s intrinsic power.

Our cohort has also discovered or revisited favorite sources for additional inspiration through the likes of Pema Chödrön, Thich Nhat Hanh, Rumi, and others. Even poets such as Mary Oliver and John O’Donohue.

I need to finish some things I have started, namely essays and poetry. Helen McDonald’s Vesper Flights given to me last fall by our very own Madame Bacon, Staff Picks by George Singleton which I picked up after hearing him speak at the Southern Festival of Books a few years ago, and a lighthearted volume which has been on my shelf for years…Secret Lives of Great Authors, billed as “what your teachers never told you about famous novelists, poets and playwrights”. From Shakespeare to Whitman, Wilde to Kafka, Hemingway to Salinger, Plath to Pynchon, this tongue in cheek yet informational book is a fun read if you have a spare five minutes to indulge in a chapter. 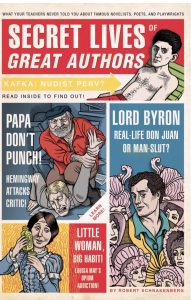 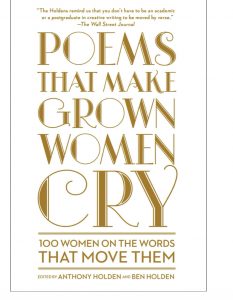 Apparently, and rather embarrassingly, the intrigue of Regency parlor repartee and steamy boudoir escapades are the train wreck from which I cannot look away. Absurd in spots, perhaps in many spots, it was a slow sell for me but sucked me in. Full disclosure, it was not entirely the plot that tickled my fancy (hubba hubba, insert Smirking Face emoji here).

To be fair though, the locales are sublime (Bath, Castle Howard, the houses of Hatfield and Wilton) and the costumes are as exquisite as they are ridiculous. It would make a wonderful Slim Aarons coffee table book…“attractive people doing attractive things in attractive places.”

I find the inclusive casting quite refreshing, but I can’t decide if the placement of pop songs is clever or gratuitous. Lastly though, one must watch the show to fully appreciate the wit and humor of the many Twitter memes it has engendered. 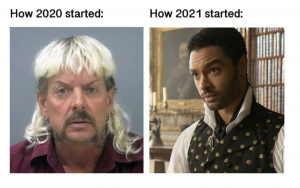 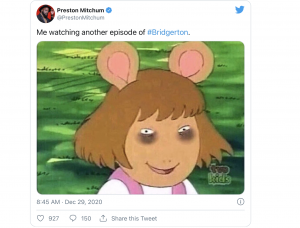 I don’t know if they meet different needs, but my tastes in both gravitate towards “edutainment”. Entertain me, but educate me too, please. “The Queen’s Gambit” is a good example (I learned a thing or two about chess) as are biopics such as “The Crown” although I did not enjoy the latest season as much as previous ones.

For sheer entertainment, I put forth the local podcast “Looking with Jay & Peter”. 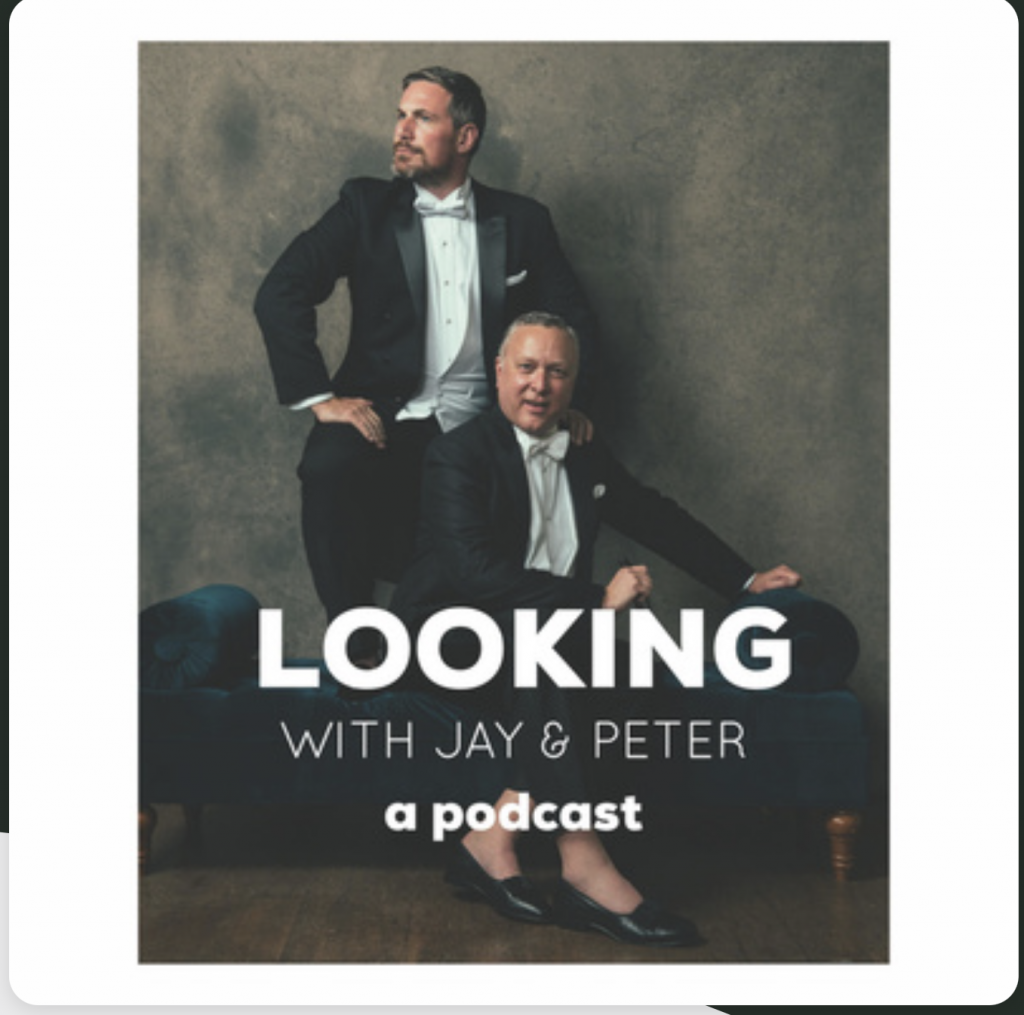 If you know this hilarious couple (Jay Joyner and Pete Depp) as I do, you will absolutely delight in visiting with them. If you do not know them, I urge you to tune in and give it a whirl; they drop a new episode every Tuesday. Ostensibly, it is Jay and Peter “looking” at a variety of rather inane topics such as restaurants, Postmates, lawn care products, binge watching, Pumpkin Spice Latte, 2020, Jo Malone candles, and West End Avenue, to name a few. Most episodes have little sidebars, such as “Ooh, La La” in which Jay shows off his high school French, “We Don’t Care” which is a lightning round of quick fire declarations of things for which they do not care, and “Love Letters to Brian Murphy” which I’ll admit I do not really understand. Largely unscripted, in every episode without fail they get off topic, and on more than one occasion they digress into Jay’s obsession with Connie Brittain.

1) Having been on hiatus since 2018, the second season of “A Discovery of Witches” has just dropped and is pure distraction. I read the trilogy by Deborah Harkness years ago. Season Two lands our protagonists in 1590s London. They are a Vampire, portrayed by Matthew Goode (remember him as Henry Talbot from Downton Abbey? (be still my heart!) and Teresa Palmer, who portrays a Witch. The character Kit Marlowe is a Daemon (what’s not to love about that?) and is played by (wait for it) Tom Hughes (and I swoon on my récamier!). I have been fangirling on him ever since “Victoria”. 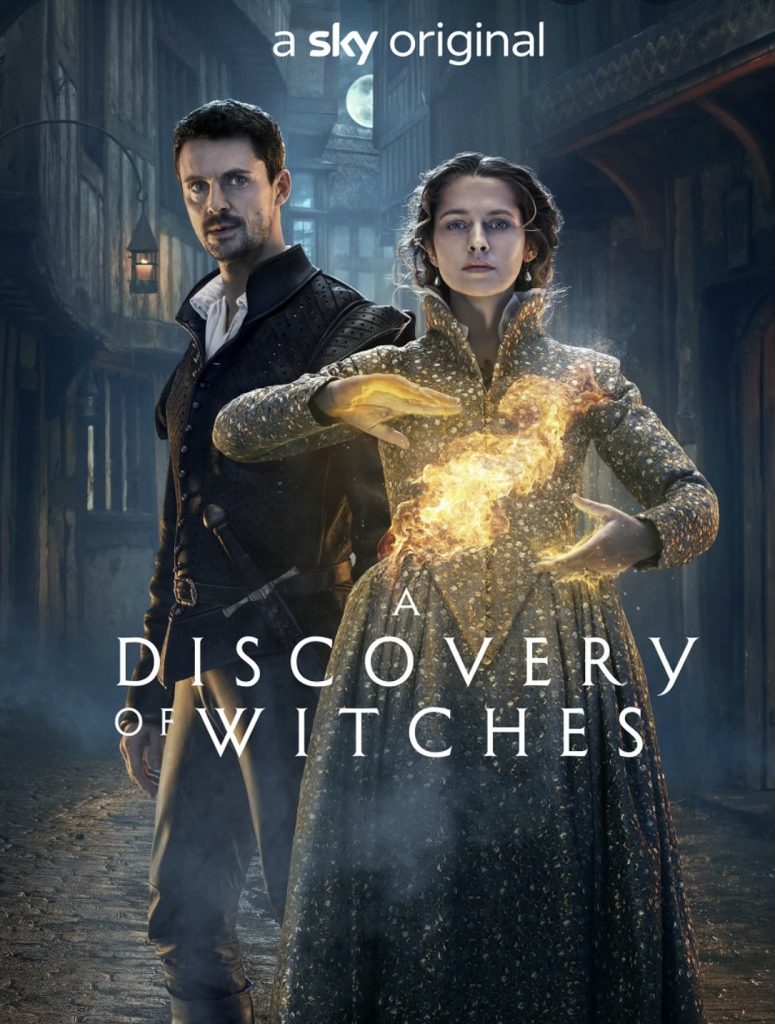 2) January’s Inauguration concert reminded me how fun the dance- party-pop anthems of Katy Perry can be. “Fireworks”, “Waking Up in Vegas”, “Roar”, “I Kissed a Girl”, “Last Friday Night”, “California Girls”,“Teenage Dream”. I know they sorta, kinda all sound alike, but come on, who’s with me on this? Turn it up! And as long as I am sharing some awkward and even embarrassing, music choices, I’ll confess that on my Spotify you might find a song or three by (gulp) Florida Georgia Line.

What aggravates you most right now?

It is said that if something pushes your buttons, it means you have buttons to push. I try to remember that, and so, what aggravates me is nothing in particular, but several things in general. As ever, it is single-minded people, self-righteous people, self-absorbed people, people who take up all the air in a room. And people who don’t use turn signals.

What gives you hope?

The days getting longer, my shoulder getting stronger. Steadfast faith, but also great hope in Science. However, lest you think I have my head completely in the sands of lala-land, know I am very worried about the variants of the Coronavirus. Do not doubt for one minute the tenacity and adaptability of this, or any other, virus; it’s their one job! Carl Sagan wrote “Nature is always more subtle, more intricate, more elegant than what we are able to imagine”, and I keep hearing Dr. Ian Malcolm in my ear…“Life, Uh, Finds a Way”.

I will leave you with this from April, 2020… BBC’s Live Lounge Allstars raising charitable funds in support of the global effort to stay safe and stay home during the pandemic.

Thank you so much for this fun interview, Mary Jo. And Happy Birthday! 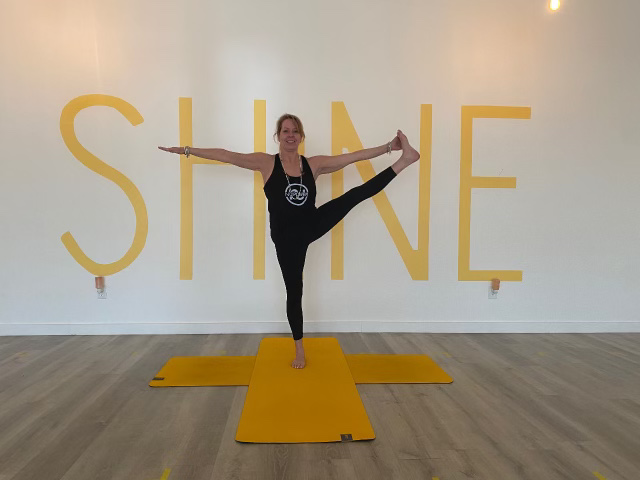 (By the way, I really liked it when you called me Madame Bacon.)