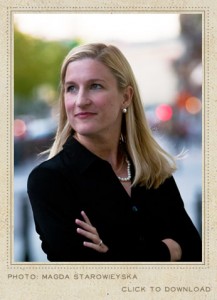 “Actually, I’m a failed opera singer,” Ruta Sepetys says with a smile, but it’s the kind of smile that lets you know it still hurts.  That was chapter one.  Chapter two:  she went to Los Angeles and worked in the music business for 25 years, eventually moving to Nashville.  As an artist manager, she helped artists “brand” themselves.  “What’s your story?” she’d ask relentlessly – day in, day out – to every artist she worked with.  One day, an artist asked it back –  “What’s your story?” – which floored her.  No one had ever asked that.  She stumbled over an answer.  “Well, I’m Lithuanian, born in Detroit…”  She knew that her grandfather and father had fled Lithuania in 1941 before Stalin overran the country, but she didn’t know much more.  I don’t even know my own story, she realized, and she could not get that thought out of her mind.

Ruta’s decision to explore her family’s past led her to write Between Shades of Gray (not to be confused with that other series of books).  A New York Times and international bestseller, published in 46 countries and 33 languages, Between Shades of Gray was also selected in 2014 by Mayor Karl Dean as Nashville’s All-City Read.

I had the chance to hear Ruta speak at Nashville’s Centennial Club last week, and I can’t get her off my mind.  A passionate and engaging speaker, she told us that stories of strength through struggle are what interest her most. 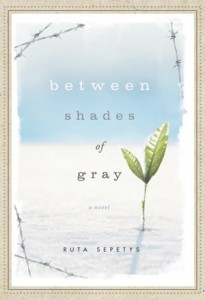 We can tell.  Between Shades of Gray is the story of a 15-year-old girl, Lina, and her family, who are deported from their home in Lithuania first to a labor camp deep in the heart of Russia and ultimately to a camp in Siberia.  Amid death and madness there is also generosity, bravery, heroism, and love.

Sepetys researched this novel exhaustively, interviewing survivors of the camps as well as reading as many sources as she could get her hands on.  It is a little-told tale, as those who were eventually allowed to return were still citizens of the Soviet Union, and they returned to lives of fear and silence.  The Baltic states of Lithuania, Latvia, and Estonia only gained their freedom in 1990, at which point the stories began to trickle out.

Ruta told us that many people she spoke to were initially scared to speak to her.  Even after 25 years of freedom, they were concerned that telling the truth about their experiences might harm their families.  “Interviews with the survivors changed me as a human being,” Ruta says; she was unprepared for the horrors recounted and the intensity of emotion that accompanied the telling.  And yet – many people told her that their suffering gave them the greatest spiritual strength of their lives.  Through what they endured, they found meaning in the ability to find and share hope.  “Hope and love allowed them to survive.  Hope allows you to get through this book,” Ruta says.  I recently read Between Shades of Gray and would echo her:  this book is a testament to the excruciating and beautiful hope humans are capable of, hope in the face of depravity, and it is a deeply moving read. 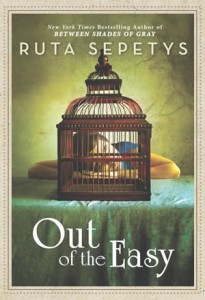 I have not read Ruta’s second novel, Out of the Easy, but I’ve got it on my list now.  “If Between Shades of Gray is about the struggle to retain faith in humanity, Out of the Easy is about learning to fly when you’ve been born with broken wings,” Ruta says.  The young heroine in this novel is brought up in a brothel house in 1950s New Orleans, where her mother works.  It traces her courageous journey to create a “normal” life for herself despite the odds.

Speaking all over the world about this book, Ruta has been fascinated by how differently it is received in different places.  “Here in the U.S., it is about courage and survival.  In France, they say it is a book about identity.  In Japan, it is about compassion.  In Germany, feminism.  In Thailand, it is about not falling into life in a brothel.  You go on tour, and your readers tell you what your book is about,” Ruta continues, “and they are always right.  Trust the tale, not the teller!” she emphasizes.  To her, the creative partnership between an author and a reader is a beautiful and unique relationship.  In movies and television shows, the producer shows the viewer exactly what a character looks like and emphasizes certain emotions and actions over others.  In a book, the reader creates the character in his or her own mind and amplifies the emotions that are elicited by the story.

Ruta believes strongly in the power of novels not only at the personal level but also to shape the future.  In a novel, history is brought to life through a story.  When you start to feel empathy for the characters, you can begin to imagine a more just future.

There was not a cough, a sneeze, a murmur or a rustle in the room for the 30 or 40 minutes that Ruta spoke to the gathered ladies (and a few gentlemen).  Perhaps the quietest moment of all was when Ruta told us her own family’s story of strength and struggle.  Her grandfather was an officer in the Lithuanian army in 1941, and immediately before Stalin invaded, he was able to escape to Germany with his young son – Ruta’s father – making part of the journey on foot.  For 9 years, they lived in a refugee camp.  Eventually, they made their way to Detroit, where her grandfather got a job with the Ford Motor Company.  Their escape was not without its price.  After Ruta’s grandfather fled Lithuania, 12 family members who remained behind were deported to the camps as punishment.  “My American dream came at the expense of my relatives…” Ruta said quietly. 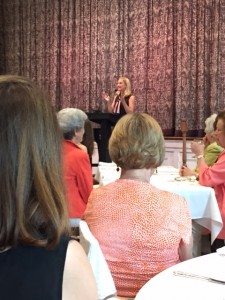 Find your story, she told us.  Share it.  And decide:  Who do you want to be in the tale that is your life?

Thank you so much, Sandra Lipman, for inviting me to join you to hear Ruta’s powerful, encouraging message.

For more on Ruta, check in at her terrific website, RutaSepetys.com.