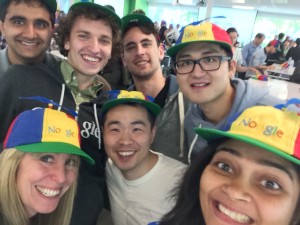 Martha and other “Nooglers” in California

I sometimes feel like I barely manage the technology in my life.  BaconOnTheBookshelf only exists because my friend Betsy Wills patiently and painstakingly walked me through all the hard parts.  I’m so impressed by friends like her and Martha Ivester, who has recently joined the Google team as City Manager of Google Fiber, Nashville.  She’s in charge of the rollout of the gigabit network here!

“It’s a fantastic place to work,” Martha says, two and a half months into the new job.  “I’m surrounded by crazy smart people and things move very fast.  It’s a huge challenge but I’m loving it.  I’m really excited for what it will do for Nashville, particularly for the growing entrepreneur community and for the music and entertainment industry.  Basically anyone who uses tons of data and for whom bandwidth matters.”

In Martha’s house – with three kids all trying to do their homework at the same time – it matters!  (It’s possible that gaming and streaming also take up some of that bandwidth.)  Her son Lloyd starts 7th grade at MBA next year, while Audrey continues at Harpeth Hall and Opal at Ensworth.  “Three schools, Lord help me,” Martha laughs.

In addition to everything else, Martha serves on the boards of Nashville Ballet and Communities in Schools of Tennessee; she’s also active with the Tennessee Film, Entertainment and Music Commission, the Country Music Hall of Fame, the Nashville Public Library and the Chamber of Commerce.

She and Gavin take the kids to a family cabin in Canada each summer, and there she enjoys time to read and reflect.  This year, she didn’t read as much as she usually does – and in today’s post at Bacon, she thinks about that. 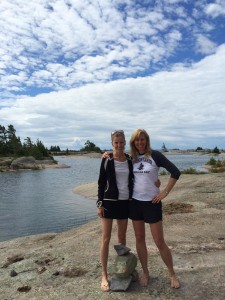 Every summer, my husband and I pile three kids, the dog and mountains of fishing gear, pantry items, games and clothing into our minivan and make a 17 hour trek northward to our family cottage in northern Ontario, Canada.  Every year I pack a large LLBean bag of books and unread New Yorker magazines, with visions of rainy days stretched on end, cuddling on the couch with the kids, reading Arthur Ransome’s Swallows and Amazons.  This year was no exception, and I was eagerly anticipating cracking open Alice Munro’s Family Furnishings, collected short stories from 1995-2014.  I figured Alice was the perfect choice for the cottage.  Not only is the short story ideal afternoon “snack” reading, but Alice also lives and writes almost exclusively about women and daily life in Southwest Ontario, my birthplace. 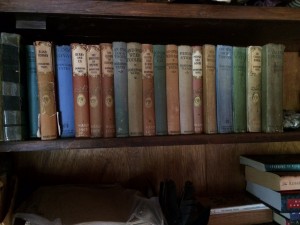 The cottage, not far from Munro’s home in Huron County, is where I reconnect with my sister each year and where I relish the rhythms of a simple life: boiling a kettle of water to wash dishes aided by a propane lamp, beating a 50-year-old rug with a broom in lieu of a vacuum, and pull-starting a motor to run the pump every time someone flushes the toilet.  The previous owner (my second-cousin Sue) was a librarian, and the shelves next to the large stone fireplace are lined with an incredible collection of classics and guides to snakes, wildflowers and amphibians.

In addition to Munro’s Family Furnishings, I brought along a selection of parenting books, work-related non-fiction, novels, children’s classics and half-finished books from years past.  I lined this selection up on the makeshift shelf in the Bunkie (cabin), and stacked the New Yorkers next to the wicker chair.

Alas, I did not finish Alice.

Which to me is crazy.

How is it, that several years ago, with a baby on the hip and another at constant risk of drowning in Georgian Bay, I managed to somehow finish all 928 pages of The Count of Monte Cristo?  Yet this year, with self-sufficient kids (ages 7-13) who will happily curl up with a book of their own, I could not finish ONE book?  This troubles me.  I mean, Alice managed to write with three underfoot.

Alice Munro, who has been called “the master of the contemporary short story,” said she never set out to write short stories, but was drawn to the format by its convenience.  She raised three young daughters and worked in a bookstore.  She did not publish her first story until she was 37.  In a 2013 interview in The Atlantic, she said “… when I was younger, it was simply a matter of expediency.  I had small children, I didn’t have any help.  Some of this was before the days of automatic washing machines.  There was no way I could get that kind of time… I wrote in bits and pieces with a limited time expectation.”

After much soul-searching on the two-day drive home, I have come to the following conclusions as to why my stack of books remained relatively untouched.

2.   I went back to work four years ago.  Unplugging is hard.

3.   We have a lot more cocktail dates on neighboring islands.

I think Alice would be ok with #3.

That said, the two-thirds of the book I did read was like finding an old friend.  Alice’s stories stick with me.  Her characters trouble me; they are rarely content.  They make me uncomfortable but I come back to them long after I have moved onto the next chapter. 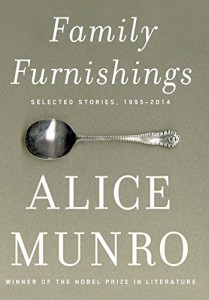 Pauline, in “The Children Stay,” is on holiday with her husband, two young daughters and his parents.  He seems to be a loving husband, his parents are non-confrontational, and her babies perfectly average.  Pauline is a stay-at-home mom who recently joined a community theater performing group.  The story begins with her quietly leaving the house in the morning with the baby for a morning run before the rest of the family awakes.  We follow the routines of the day while getting glimpses of the past few months, her audition for the play, and her affair with the director.  Without warning, Pauline decides to take the car, leave her family and run off with him.  You assume that once she wakes up in the seedy motel room she will feel some remorse; she will miss the smell of her 16-month old or panic about her 5-year old growing up without her.  Instead, Pauline simply abandons her husband and daughters.  And the story ends.  “The children have grown up.  They don’t hate her.  For going away or staying away.  They don’t forgive her either.  Perhaps they would have forgiven her anyway, but it would have been for something different.”

In “Hateship, Friendship, Courtship, Loveship, Marriage,” Johanna is a middle-aged housekeeper living in a small town in Northern Ontario.  As the story begins, she is at the train station, arranging to ship furniture across the country.  She purchases a very elegant suit for the journey, presumably to be married upon arrival at her destination.  We learn that the man she is traveling to see is not expecting her; that she has been tricked into thinking he has feelings for her by his teenage stepdaughter who is having a little fun at her expense in order to impress a friend.  Johanna finds him penniless, close to death, and in a virtual ghost town in Saskatchewan.  The story ends with the obituary of her former employer (the father-in-law of the penniless man), where we discover that Johanna and her intended have since married, moved to Vancouver, and had a son.  Munro ends the story with the puzzled stepdaughter: “It was the whole twist of consequence that dismayed her – it seemed fantastical, but dull.  Also insulting, like some kind of joke or inept warning, trying to get its hooks into her.  For where, on the list of things she planned to achieve in her life, was there any mention of her being responsible for the existence on earth of a person named Omar?”

Munro is a master at saying volumes with a few words.  One of my favorite lines is in the title story “Family Furnishings”:  “After their short, happy marriage, they were sent to separate cemeteries to lie beside their first, more troublesome, partners.”  In “My Mother’s Dream,” written from the perspective of a baby, we learn about her parents’ courtship.  “Choosing her, he showed people what he thought of them.  Showed those girls who had hoped to get their hooks into him.”  And in “Dear Life”: “According to her grandmother, she then got a job at a restaurant in Toronto, where she wore an outfit with sequins on it.  I was old enough at that point, and mean enough, to assume that it was probably a place where you also took the sequin outfit off.”

The beauty of Alice Munro is you can keep her on your bedside table and sample her when the mood strikes, or the laundry is done, or you want an escape that hits close to home.  You can read in bits with limited time expectation.  Kind of like that stack of still unread New Yorkers.

For Martha Ivester’s intro bio and prior post on Undress Me in the Temple of Heaven, please click here.