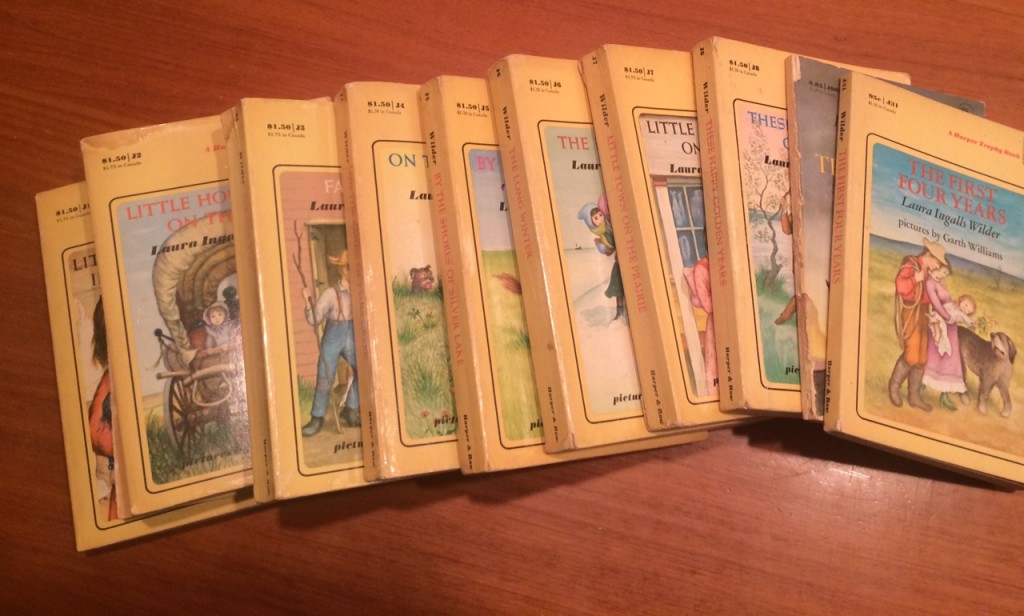 Mary Jo Shankle’s Little House books (I had the same set and bet you did too!)

Everything I know about pioneers I learned from Little House on the Prairie.  Or at least everything I remember.  The Little House series and the show mix and mingle in my mind, leaving a deep impression of pioneer struggles (the grasshoppers!), pioneer heartiness (Pa with the ax), pioneer weather (freezing cold or scorching hot), pioneer style (bonnets and britches) and pioneer evil (Nellie).

I thought I was a serious fan until I saw the notes my friend Mary Jo Shankle had made in her childhood copies of the series: 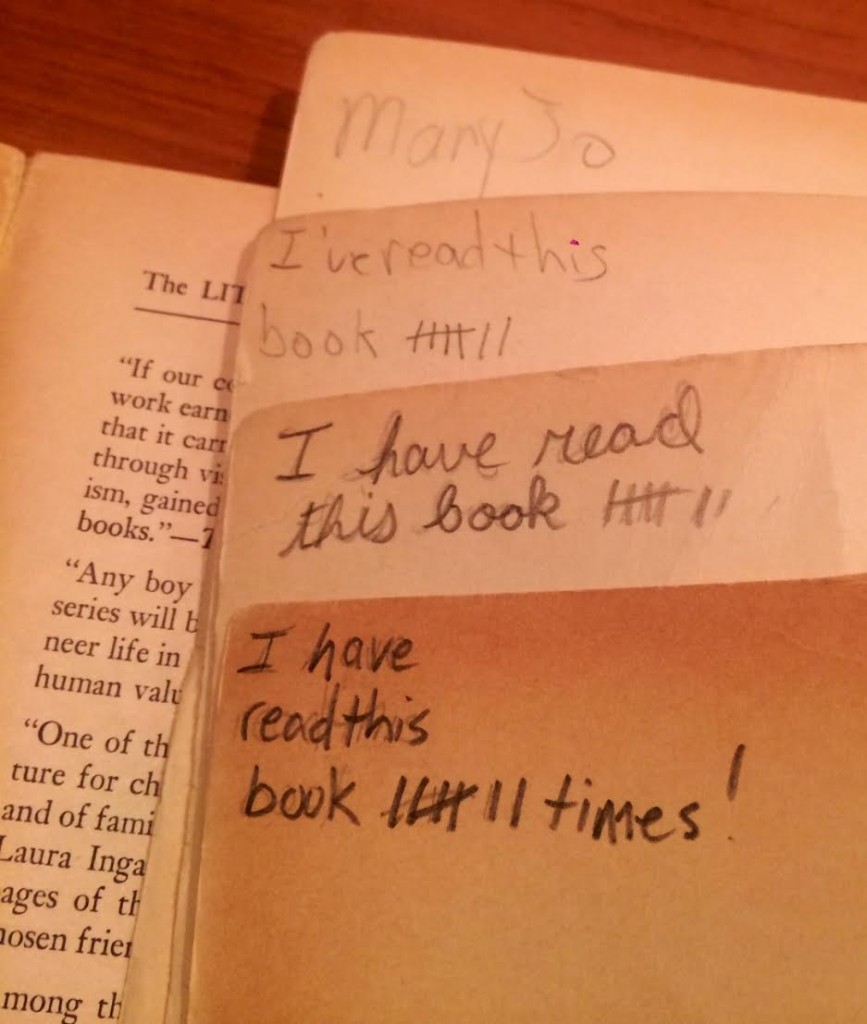 You may recall that Laura Ingalls’ Wilder’s Pioneer Girl: The Annotated Autobiography was published last year with great fanfare.  To summarize how this came to be:  During 1929 and 1930, while in her early sixties, Laura wrote Pioneer Girl based on her family’s experience in “Indian Territory” from 1869 through 1888.  She wrote it as a mature adult for an adult audience.  Her daughter Rose Wilder Lane submitted her mother’s manuscript to a publisher in 1930, but it was declined.

Rose decided that the manuscript needed to be edited heavily to be a commercial success, and she and her mother began work in earnest.  Rose switched the voice from Laura’s original first person point of view to an omniscient third person narrator, transforming it from autobiography to fiction in the process.  Most importantly, she reimagined it as a children’s book.  At times, the work was frustrating:  “Working on my mother’s story – stupidly,” she wrote in her diary, “for will it come to anything?”

In May of 1931, Rose submitted the manuscript again, and the mother and daughter waited all summer and into the fall for word.  “Feeling dull & sunk,” wrote Rose in her diary on September 11th.  In November, they received the news that Harper & Brothers had accepted it for publication, and Little House in the Big Woods was released on April 6, 1932.  Wilder went on to write the six other novels in the series over the coming eleven years.  They have never been out of print. 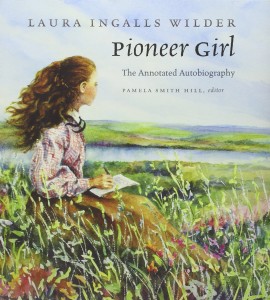 “So, all these years later, does Pioneer Girl merit publication, and if so, why publish Wilder’s rough draft?” asks editor Pamela Smith Hill in the introduction.  Hill believes it is a unique treasure.  “Her voice is intimate, conversational, and unguarded.  Reading this transcript of Wilder’s handwritten draft is perhaps as close as modern readers can get to the experience of hearing the author’s life story in her own words.”  I asked two of my good friends who are Little House enthusiasts – Kate Satz and Caroline Trost – what they thought.  Caroline explains why you might not love it – and Kate describes why you might. 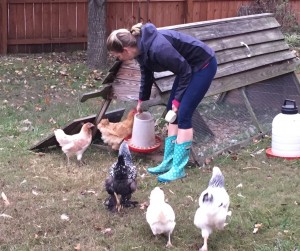 Like so many of us, I grew up on the Little House books and I internalized them.  I wanted to be Laura Ingalls; I lamented that I was born too late to be a pioneer, to see the prairie before it was entirely planted over with corn and soy.  The books instilled in me an enduring fascination with and longing for the “West” and for the agricultural life generally.  The fact that I garden and keep backyard chickens now is probably directly attributable to Laura Ingalls Wilder (LIW).

So I was excited to dig into Pioneer Girl, and I figured I was the target audience.  Besides being a devoted Little House fan, I figured the annotations would be fascinating.  After all, I absolutely loved my girlhood copy of The Annotated Alice: The Definitive Edition, by Lewis Carroll (author), Martin Gardner (Editor, Introduction), and John Tenniel (Illustrator), every note of which either deepened understanding of Carroll’s original stories or took the reader on a fascinating side trip.  Pioneer Girl, sadly, is no Annotated Alice.  While the project of writing this tome required a deep passion for the subject and for history generally, the copious annotations as often as not detract from the narrative.  Some of the notes provide interesting insights, but many of them are simply dull (though scholarly and well researched) detours.  And I found the central narrative itself be downright confusing and not very compelling.  (I found it less confusing when I started ignoring the notes.)  In the end, I don’t feel that I learned all that much new or important about LIW that I didn’t get from the fictionalized version of her life in the Little House series (except perhaps that the real-life Pa was a bit of a peripatetic dreamer and not the paragon of manhood portrayed in Wilder’s fiction).  In short, I think I would have enjoyed more a straight-up biography of LIW.  Or just rereading the original Little House series! 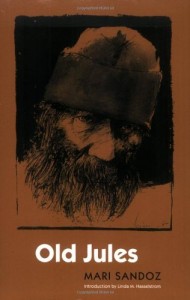 So unless you are both a historian and a hard-core LIW fan, you can safely skip Pioneer Girl.  However, for a truly excellent real-life pioneer biography, may I recommend instead Old Jules, by Mari Sandoz, published in 1935.  The book portrays the life of the author’s father, Jules Sandoz, a character in equal parts fascinating and repellent.  Sandoz describes the book as not only a biography of her father but also, “in a larger sense… the biography of a community, the upper Nibrara country in western Nebraska.”  More than that, it is a biography of life on the American frontier.  This beautifully written and utterly compelling book finally cured me of wanting to be a nineteenth-century pioneer woman, as it depicts unflinchingly how brutally difficult and unglamorous the life could be.  Any fan of the Little House books should read this book.  It won’t make you love LIW’s fiction any less, but it will provide a grown-up counterpoint.

I haven’t read a Little House book in over thirty years, but vivid still are my memories of Ma making cheese, Pa inflating a pig bladder balloon, and Manly being so manly with those unbroken horses.  So happily I sat down with Pioneer Girl, The Annotated Autobiography – only to find a different sort of book.  I struggled, feeling constantly hijacked by footnotes (the sheer volume of which determined the coffee table book design, I suspect).  I confess that Pioneer Girl took its place on my ottoman, providing a sturdy surface for my wineglass until I picked it up again several weeks later. 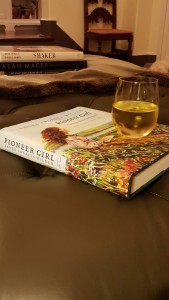 Perhaps the wine helped.  On second approach, I understood this wasn’t a single sitting page turner like the Little House books, but one to read closely a bit at a time.  Savor the passage about dressing for the dance at Grandpa Ingalls’ house in the Big Woods or twisting hay to burn during the Long Winter, and then harvest all kinds of enlightening detail from those copious footnotes.  And the photographs!  Seeing what a sod house and a hay twist actually look like, not to mention the real-life characters, those stylish curled bangs called fringe, and the carefully described dresses of calico and lawn… this may have been my favorite part.

I quickly came to appreciate Pioneer Girl as a book most powerfully about craft, how the facts of one woman’s childhood recollections were shaped into a cohesive story with structure, theme, and momentum.  The debates between mother and daughter – author and editor – about what to change, enhance, include or not reveal a fascinating process, like viewing the preliminary sketches and portrait studies that precede an artist’s famous painting.  Photos of heavily edited manuscripts, handwritten and typed, bring the process even further to life.

Most arresting in Pioneer Girl, I think, was just how tenuous the Ingalls’ survival actually was.  The cozy glow suffusing the Little House books kept circumstances from seeming as dire as they often were.  Television only fostered this fiction; Michael Landon never looked like he was starving so his children could eat.  Pa did anything – hunt, farm, build, clerk for the railroad, run a boarding house, haul or herd – just to keep his family alive amidst poverty and disease, near lawlessness, desperate Indians, and threatening wildlife.  This, as well as providing the larger historical context shaping the Little House stories – railroad construction, land speculation, Indian conflicts, disparate immigrant cultures, catastrophic weather, even popular music and dances – is thoroughly documented here, making Pioneer Girl a treasure for historians, writers, or anyone interested in the way great stories come to be. 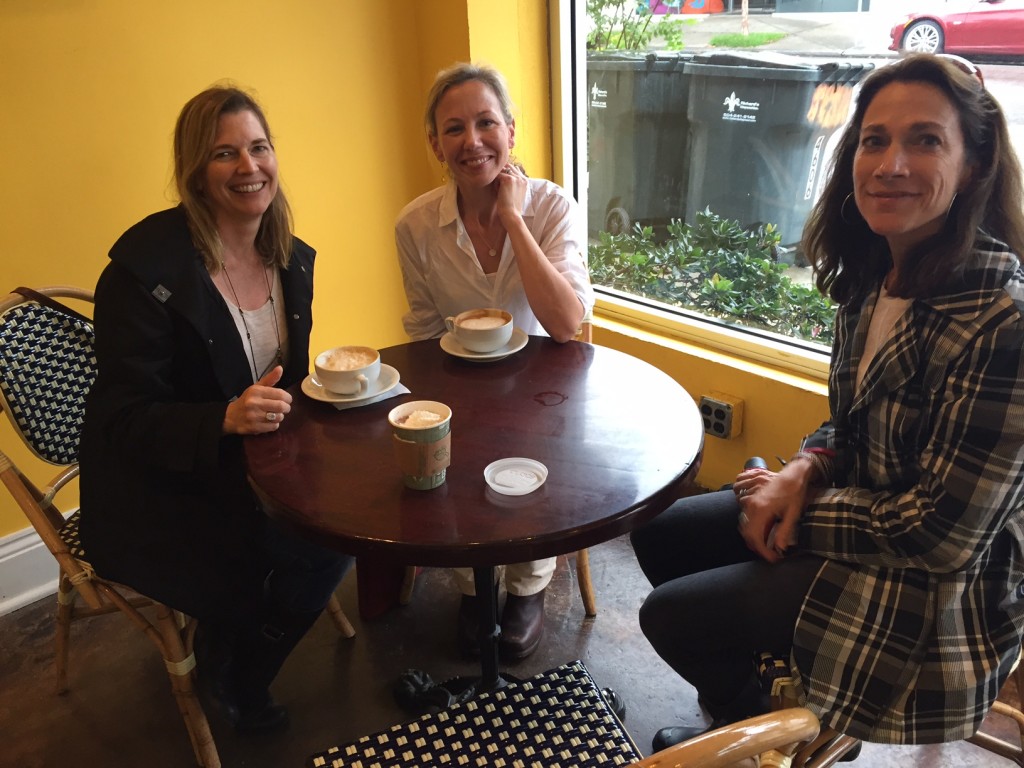 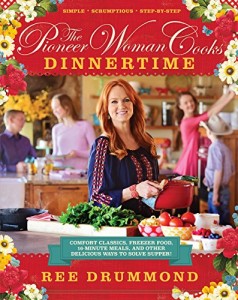 From Pioneer days to the present, someone has to get dinner on the table.  We all know who that “someone” often is.  I’ve read great things about this latest cookbook from Ree Drummond, The Pioneer Woman Cooks: Dinnertime: Comfort Classics, Freezer Food, 16-Minute Meals, and Other Delicious Ways to Solve Supper!

Ree Drummond‘s story:  “After marrying a cattle rancher, moving to the country, and having babies for ten years, I started a blog on a whim in 2006.  There, I shared stories from my childhood, photos of my children growing up in the country, and eventually, recipes I cooked for my family.  This eventually led to my first cookbook, which was released in 2009, and two cookbooks since.  I love writing about food (and taking photos of food!) both in my cookbooks and on my website. I also love eating the food I write about!

I have enjoyed writing a series of children’s picture books based on my very lethargic and malodorous Basset Hound named Charlie.  “Charlie the Ranch Dog” has been a sweet experience for me.

My Food Network show, “The Pioneer Woman,” premiered in 2011 and it’s still being filmed on the Oklahoma ranch I share with my husband and four children.”  (from Amazon.com)