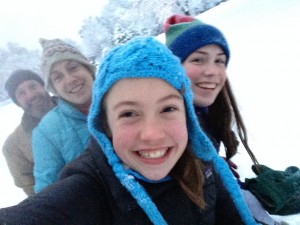 Regular Bacon contributor Lawrence Blank-Cook hopes to get a trip to Venice out of this post.  Good luck, Lawrence!  You were an awfully good sport about risking your life on that enormous old sled with your entire nuclear family on it.  I bet your husband will be a good sport about getting that trip to Venice on the calendar after reading your post! 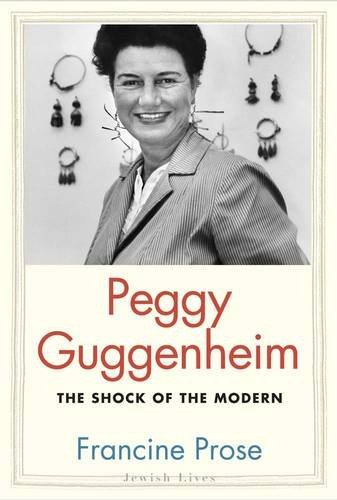 Over the past year, my husband and I have felt an ever-so-slight relaxing of the demand for our time since becoming parents.  This has resulted in finding more time to read.  Oh glory day!  I’m no longer frantically trying to finish a book for a book club that is tomorrow or skimming the last few pages before walking out the door for a book discussion.  It was with pure pleasure that I selected the new biography on Peggy Guggenheim by Francine Prose.  While driving to work one day, I heard Prose on NPR, and the interviewer played a snippet of Guggenheim herself.  She had a low, slow sardonic voice, and as she talked about her famous uncle’s “car garage” in New York (the Guggenheim Museum), I was intrigued and wanted to learn more.  While Uncle Solomon corners the market for the most impressive Guggenheim art legacy in the United States, Peggy Guggenheim’s collection in Venice clearly dominates Europe. 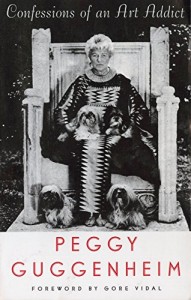 In Peggy Guggenheim: The Shock of the Modern, Prose tackles her subject in an unconventional way.  She begins not with birth and the subsequent chronology of a life, but with an explication of Peggy’s multiple memoirs.  Guggenheim wrote the first account of her life in 1946 and called it Out of This Century – playing on the name of her New York gallery – Art of This Century.  In 1960, the first revision was called Confessions of an Art Addict, and she scandalously named many of her lovers and gave out sordid details on her husbands, various lovers and friends.  Again in 1979, Guggenheim revised and republished Out of This Century, scaling back the more vitriolic pieces and filling in names and details.  It seems as though time gave her (some?) perspective as she came to terms with the historical time period in which she lived, her extensive relationships with family and friends, and most importantly her influence in the art world.  As Prose summarizes, “Peggy sometimes prefers the good story to the wholly accurate one.” 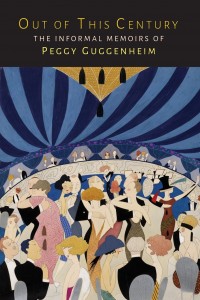 Guggenheim must be somewhere in the top ten of the most influential female art collectors of the 20th century.  Like Gertrude Stein before her, Guggenheim was a patron of the arts, and as she served, promoted, and collected in these circles, she became a key part of the art world itself and helped promote emerging artists and styles.  She personally knew, socialized with and collected Picasso, Pollock, Brancusi, Arp, Braque Calder, de Kooning, Rothko, Duchamp, Ernst (husband number 2), Giacometti, Kandinsky, Klee, Leger, Magritte, Man Ray, Henry Moore, and Francis Bacon.  Her relationship with many was often friendly, but also ruthless in her pursuit of a great collection.  It was indeed her addiction that led her to care more for the art than for the artist.  During World War II as the Germans were nearing Paris, Guggenheim finally succeeded in negotiating with Brancusi for his famous “Bird in Space.”  Guggenheim calmly observed, “Tears were streaming down Brancusi’s face, and I was genuinely touched.  I never knew why he was so upset, but assumed it was because he was parting with his favorite bird.”  Her laser-like focus on the art naturally subjected the artist to second place.  While she cared for the artist, the art itself was the ultimate prize.

Jeune Guggenheim was her first art gallery in London, and Art of This Century in New York was her second.  She wanted not just a gallery, but an innovative exhibition space and salon for artists to gather.  And they just did that from 1941 to 1947.  After her divorce from Ernst, she left the United States for Venice and established herself and her collection.  You can take a virtual tour and see “The Angel of the City” that welcomed her guests when she was living and still does today.  It was one of Guggenheim’s favorites.  “Peggy Guggenheim: An Art Attic,” a film directed and produced by Lisa Vreeland, debuted at the Jewish Film Festival in 2015, and it was nominated for Best Documentary at the Stockholm Film Festival.

Upon further research, I have learned of other biographers who focus on Guggenheim’s “voracious sexual appetite.”  Prose clearly separates the personal from the professional (as much as possible!) to focus on Guggenheim’s true “work” at hand.  While other women were working in factories and doing whatever they could for the war effort, Guggenheim did her part by focusing on saving the period’s best art.  While this new biography is not for everyone, I’m glad that I read it to learn more about this fascinating woman and her role in the art world.

Lawrence is currently reading Awakening the Spine by Vanda Scaravelli, The Road to Little Dribbling by Bill Bryson, and Old Filth by Jane Gardam.  She made herself finish Gold Citrus Fame by Claire Vaye Watkins because novelist Adam Ross recommended it.  She recently read and enjoyed his novel, Mr. Peanut.  She won’t commit on the best book she’s read in the last six months.  “There are too many good ones out there!”  For Lawrence’s prior post on Jacqueline Woodson’s Brown Girl Dreaming, please click here.